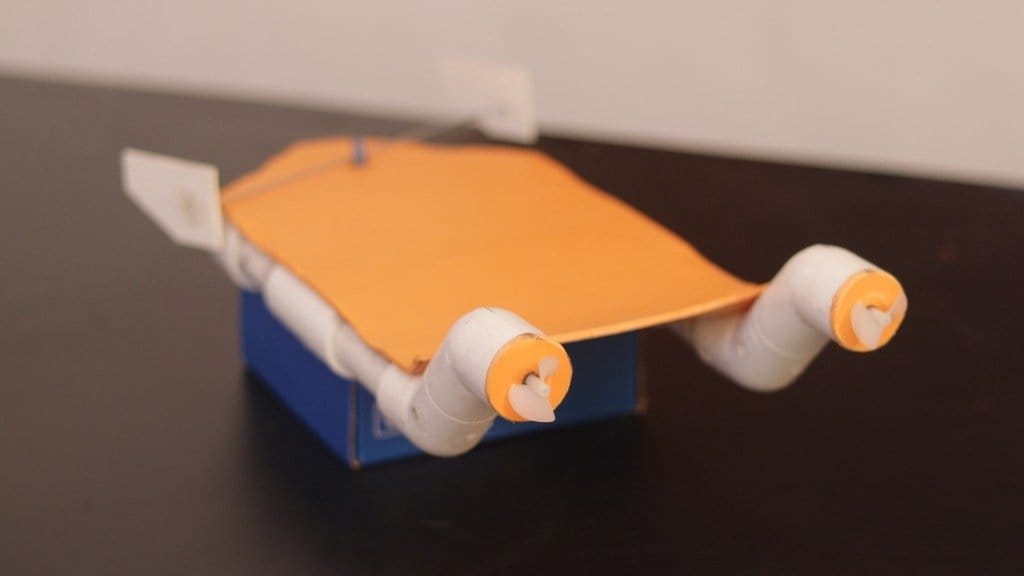 In this article, the master will introduce us to his work – a boat with voice control via a smartphone. In principle, guided by this article, you can control any load – a boat, a car, and even lighting.
Tools and materials: -Arduino UNO; -Stepper motor driver L293D; -Bluetooth module HC-05; -DC motor 12V; -Propeller; -Li-ion batteries 18650;
-Jumpers;
-Printing board ;
-PVC pipe and connectors;
-Soldering iron; -Glue gun;
Step one: how it works
The project is powered by Arduino. The microcontroller is the brain of the device. All voice commands are processed on the Arduino. To transmit the command wirelessly, the master uses the HC-05 Bluetooth module, which is compatible with Arduino and Android smartphone. A special application is installed on Android.
Five voice commands are used for control:
Move Forward – the boat will move forward for 2 seconds.
Move Backward – the boat will move backward for 2 seconds.
Turn Right – the boat will turn right 90 degrees.
Turn Left – the boat will turn left 90 degrees.
Run – the boat will move forward. 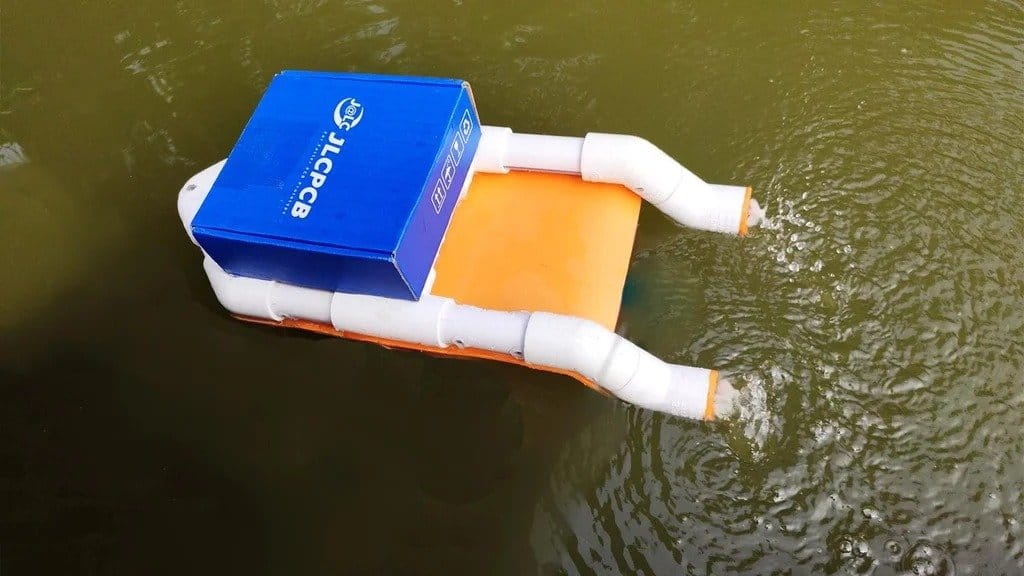 Step two: mechanical part
The boat's hull is made of PVC pipe. In the front of the boat, one motor is installed, which, through the rods, controls the rudders. If desired, you can install two motors, to control each.
In the rear, two motors are installed on the shafts of which screws are attached. 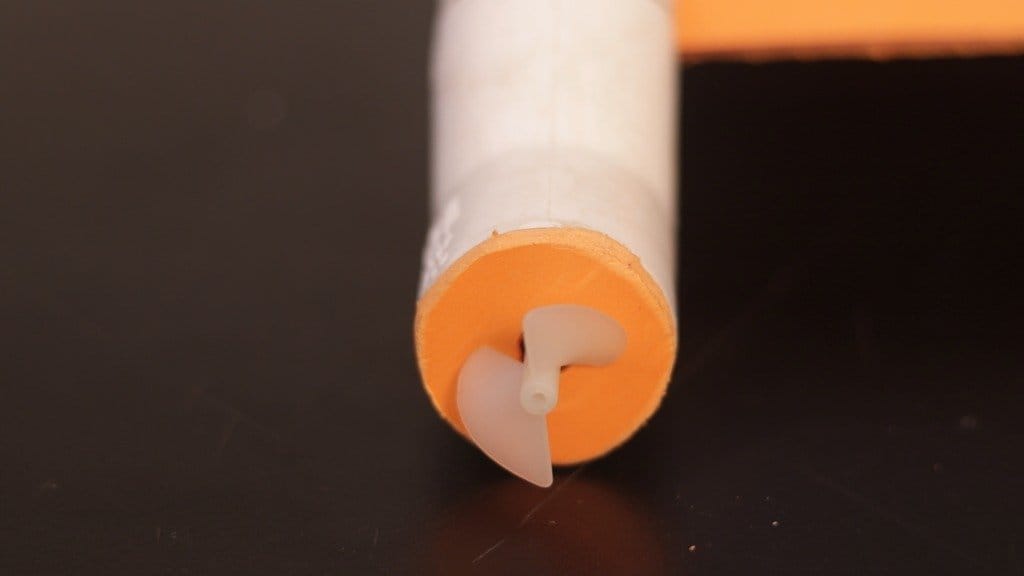 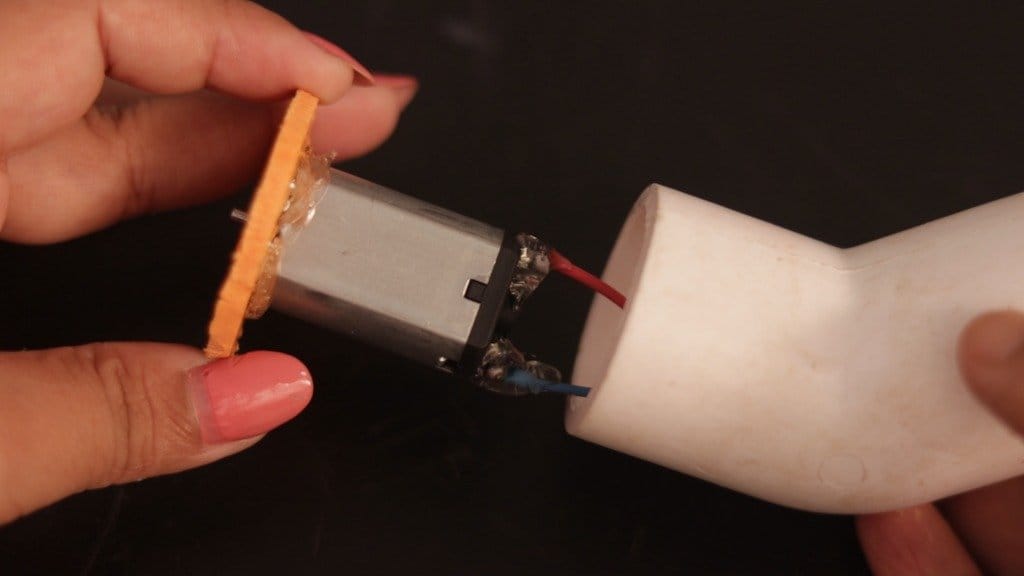 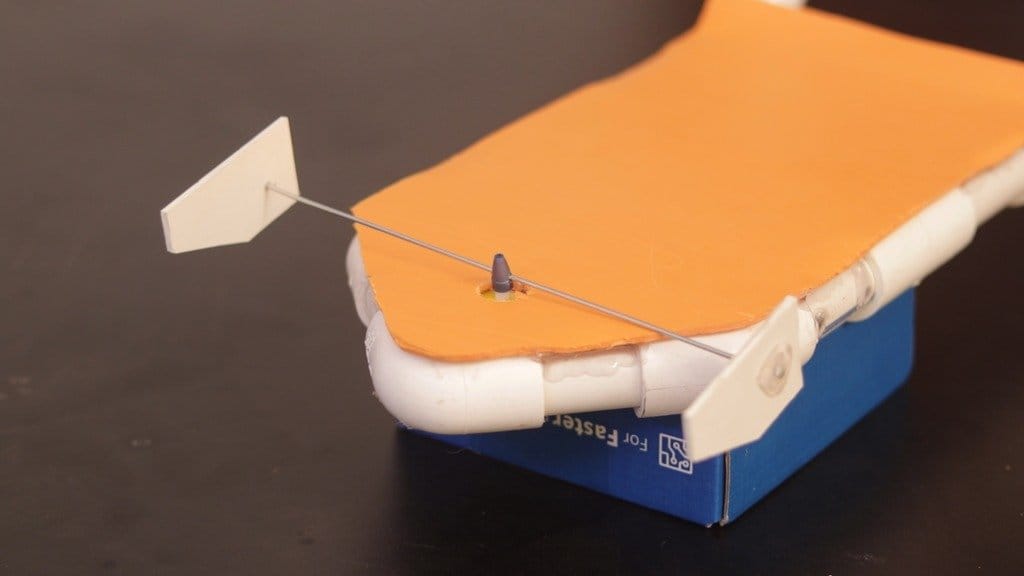 Step three : diagram
The electrical part is mounted according to the following diagram. 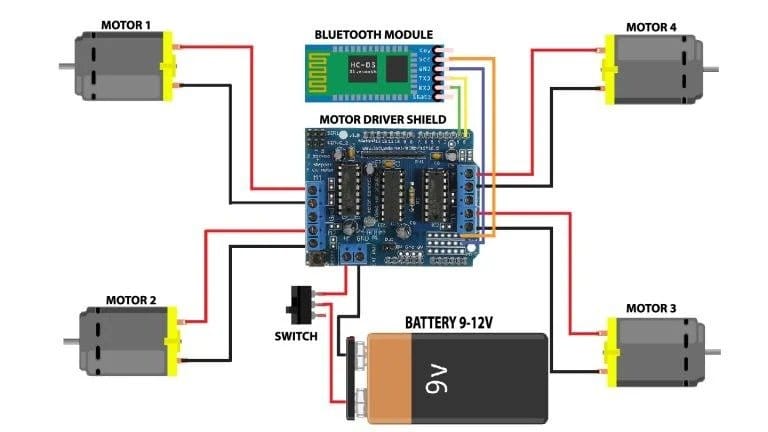 The master made a special board for controlling the motors. All electronics are attached to the acrylic plate. 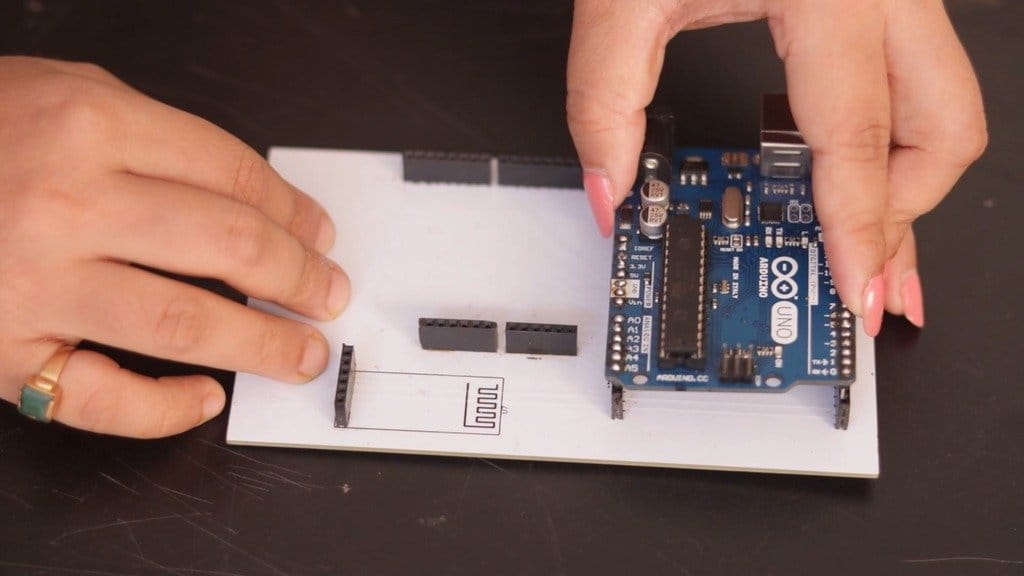 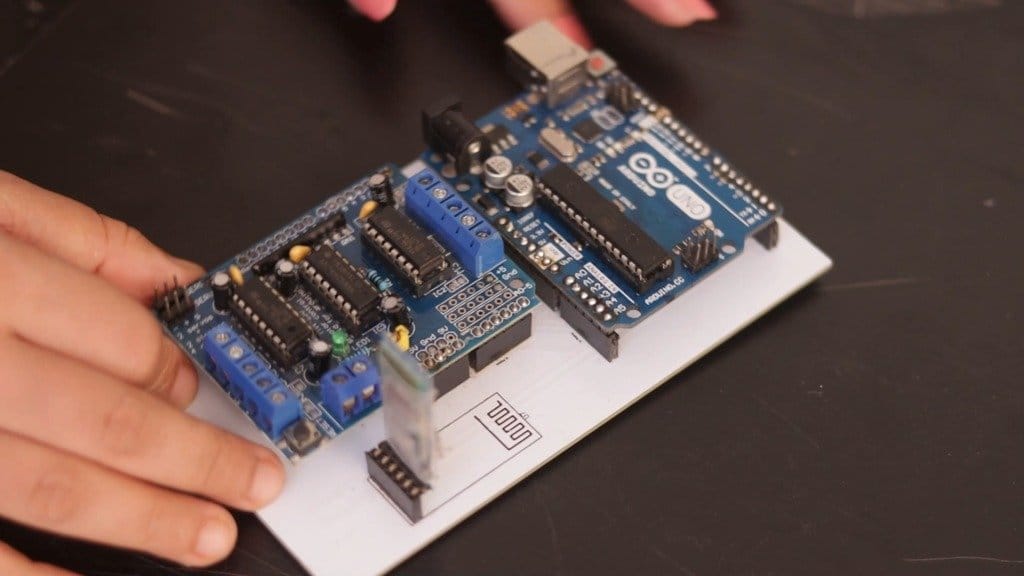 Step four : code
Now you need to upload the code to the Arduino UNO. The wizard connects the USB cable to the Arduino UNO and the PC.
Next, open the Arduino IDE and go to Tools & gt; Library management.
Next, you need to find the AF Motor driver and load it.
Then go to Tools & gt; Fee & gt; and selects Arduino Genuino UNO.
Next Tools & gt; Port & gt; Selects the correct COM port.
Finally, you need to check the code and upload it to Arduino.
Before uploading the code, you need to disconnect the Bluetooth HC-05 module.
The code can be downloaded below.
ARDUINO_VOICE_CONTROLLED_CAR.ino
Step five: final build
The master used a box from the board as a housing for electronics. The box itself is attached to the hull of the boat, and an acrylic sheet with electronics and batteries is installed in it. 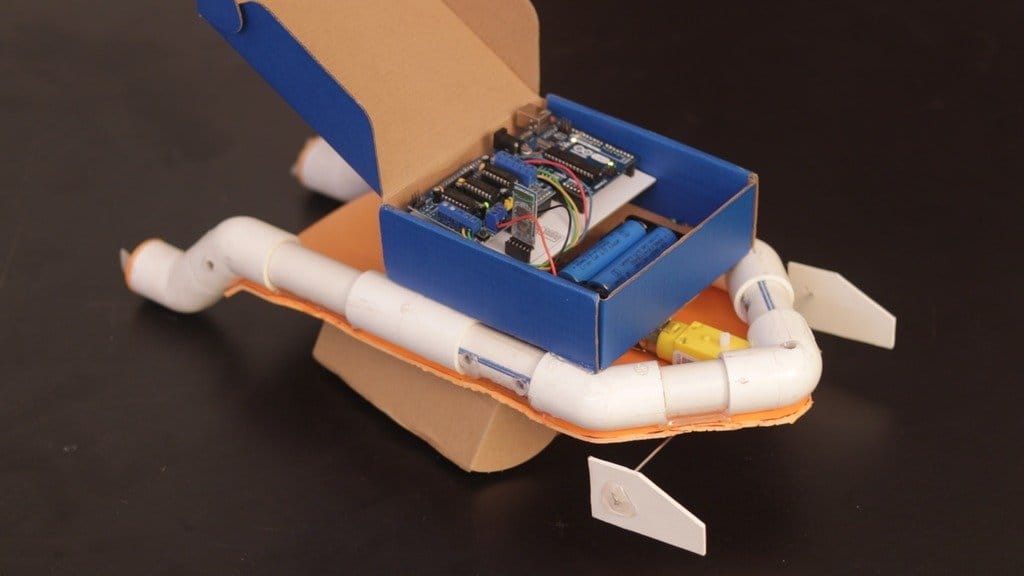 Step six : application
Now you need to install the application “AMR_Voice” on your smartphone and you're done. The link to the appendix is ​​in the code. 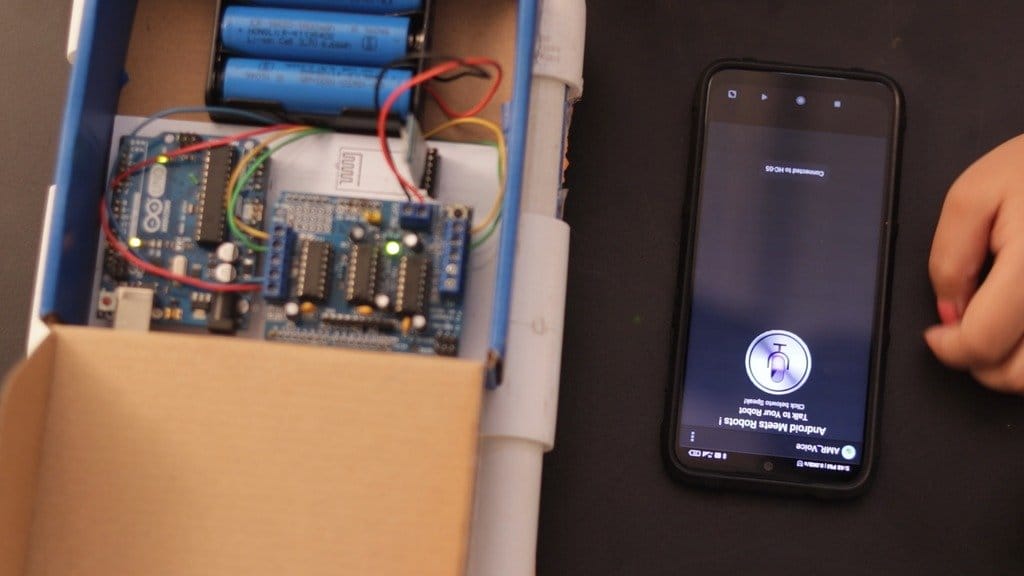 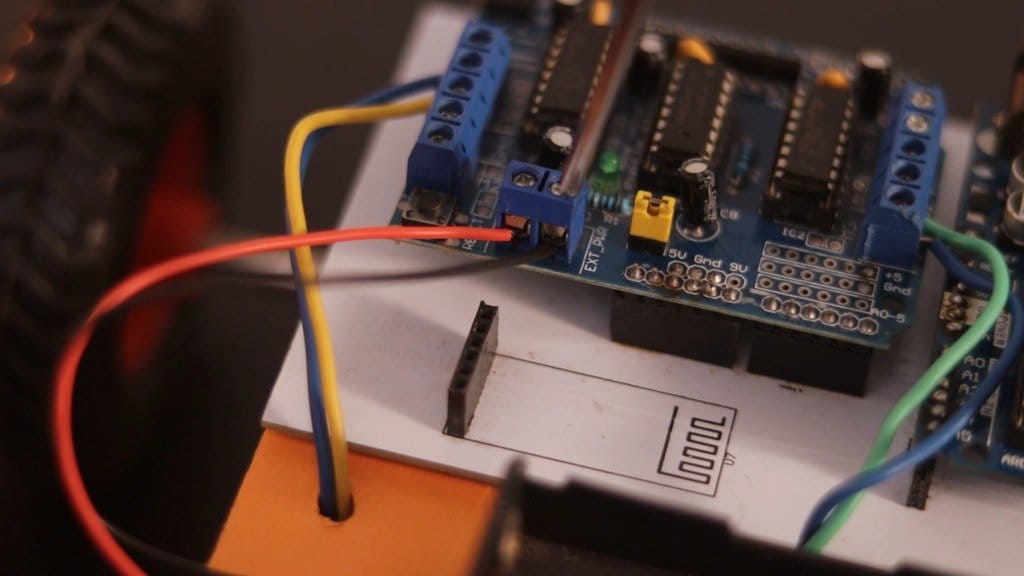 How to make a non-contact dispenser for liquids (antiseptic, soap)