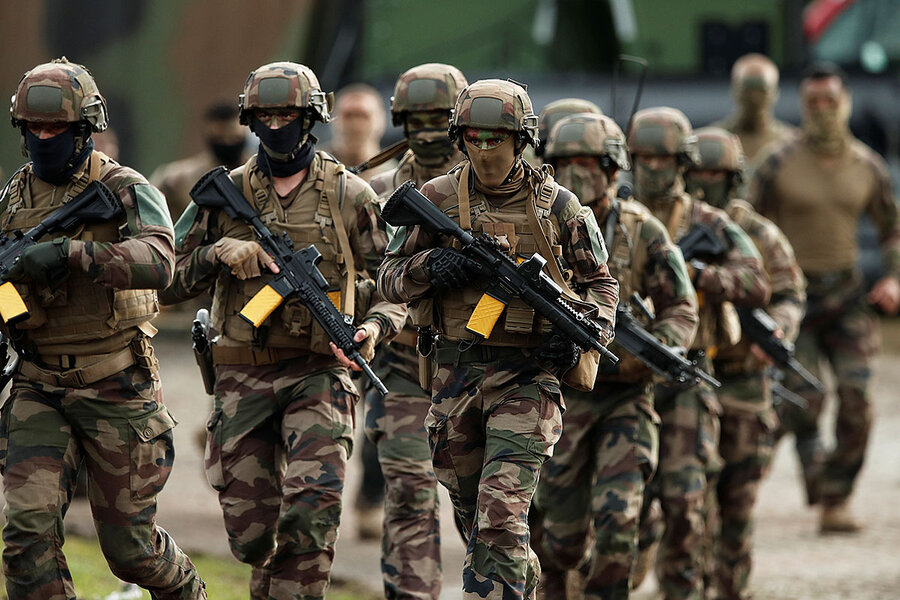 Nassim grew up in a social housing block in one of Paris’s disenfranchised suburbs, studying economics after high school. But when he set off on the job search, doors closed all around him. One recruiter said that with his Arabic name, he’d have problems finding a job and “integrating” into a company.

So when a friend suggested that he join the Army, he decided to give it a go.

“I thought I would try the Army for a few years, get some experience to add to my resume and move on,” says Nassim.

Far-right sentiment has crept into the French military and while some officials are downplaying its significance, it has provided a moment of reflection for how the army addresses diversity.

That was 16 years ago. Now, Nassim, who asked to be identified by a pseudonym because soldiers are not allowed to speak to the press without authorization, is a noncommissioned officer in southwest France. As a second-generation Frenchman of Algerian descent who’s pulled himself up by his bootstraps to a rigorous, mid-level military position, Nassim exemplifies what today’s French Army strives to be: modern, ethnically diverse, and driven.

But that image is being tested after more than 1,000 former service members – and 18 on active duty – signed an open letter published in an extreme right-wing magazine last month, warning of a military intervention and ensuing civil war if the French government failed to take action to uphold the country’s “civilizational values” against “suburban hordes” – a reference to the banlieues, or suburbs, which are home to large immigrant populations.

It follows on the heels of recent investigations by online journal Mediapart that revealed pockets of neo-Nazi sympathizers within the French armed forces.

The government has downplayed such sentiment as marginal, but has condemned it and promised to punish it where necessary. Nonetheless, as French society becomes more diverse and the Islamist terrorist threat persists, such talk is evidence of a nostalgia for “La Vieille France” within the Army, and hopes of a return to conservative French values.

It has highlighted an underlying tension within both the military and broader French society – a striving for balance between modernity and traditionalism. It has also prompted a moment of reflection for the French Army, as it looks to improve diversity and understanding within its ranks.

“A small percentage of the military is used to a bourgeois army. They’re nostalgic for traditional France, but it’s totally impossible to go back,” says Jean-Yves Camus, a political analyst at the Paris-based IRIS think tank. “The military is now an army of professionals, with more people from a banlieue background joining and giving their lives for our country.”

Traditionalism in the military

The controversial letter was published to coincide with the 60th anniversary of a failed putsch against then-President Charles de Gaulle by French generals who sought to prevent Algeria’s independence from France. Some observers say the letter hints at a longing for France’s old guard and a time when the military held influence over its colonies. But that era also marked the beginning of mass immigration from North Africa to France.

Since the 1960s, the government has struggled in its integration efforts, even if North Africans and Muslims are now part of the fabric of French society. The issue of immigration has become politically fraught, with the far-right National Front party using it to its benefit since the 1980s. The FN has often conflated Islamic fundamentalists who carry out crimes with the country’s five million-strong Muslim population. The party has also accused French Muslims broadly of lacking respect for laïcité, France’s version of secularism.

“When [FN party founder] Jean-Marie Le Pen discovered that he could mobilize people by speaking about immigration, it changed dimension and became very important,” says Michel Wieviorka, a sociologist who studies terrorism and social change. “The issue now is how to deal with Islam and Muslims – not just Islamists – in a country such as France. This is the real debate.”

Recent terrorist attacks have nudged public discourse further towards traditional, conservative values. Last month, a police officer was killed in the town of Rambouillet in a terrorist attack, and the murder of a junior high teacher in a Paris suburb by an Islamist terrorist last October set off a series of public debates and government propositions to tighten security and stamp out separatism. Emmanuel Macron is increasingly positioning himself as a law-and-order president.

Polls suggest that around 40% of the French military votes for the FN, now renamed the National Rally (RN) party, significantly more than the general population. A Harris Interactive poll taken shortly after the letter was published showed that more than half of French people supported its political sentiments – including RN leader Marine Le Pen.

So while its signatories represent a minority of the some 270,000 service members here, it speaks to a growing concern that the government isn’t doing enough to preserve traditional French values of equality, liberty, fraternity, and laïcité.

“People are exasperated by the disorder, those who are putting their religious beliefs above the values of this country,” says Pierre, a lieutenant general in Paris who also asked to be identified by a pseudonym. Though Pierre didn’t sign the letter, he agrees with parts of it. “The Army is a mirror of French society, in all of its diversity. But this letter is a thermometer; a reading of what needs to change.”

French Defense Minister Florence Parly has assured the public that an “immense majority” of French troops remain loyal and neutral. Meanwhile, the Army continues to push initiatives that promote equal opportunity and social diversity, in hopes also of combating high turnover rates since the draft was phased out in 1996.

Its Volunteer Military Service (aimed at youth in France) and Adapted Military Service (targeting youth in French overseas territories) provide skills and jobs training within a disciplined military framework, to battle delinquency and provide a potential entry point into the Army. Once inside the institution, the Army prides itself on its meritocratic system and role as the great equalizer.

“Some people call it a social elevator; we prefer the expression ‘social ladder’,” says Pierre, the lieutenant general. “You need to work hard to get ahead.”

And though gathering race-based statistics is illegal in France and diversity training remains a foreign concept here, the Army hasn’t closed its eyes to intolerance. Since January 2020, it has provided “diversity-equality” representatives to troops, who act as mediators in incidents of harassment or discrimination. Military chaplains of multiple faiths hold office hours on-site and can be a resource for those experiencing prejudice. In 2013, the Army was awarded a special prize for its efforts by the pro-diversity nonprofit Toléde Association.

Promotion beyond the rank of noncommissioned officer involves going in front of a jury of high-ranking officers, which can put members of ethnic minorities at a natural disadvantage. Daily life on base and on mission, from mess halls to sleeping arrangements, is extremely hierarchical.

That is particularly problematic, Nassim says, when incidents of discrimination occur – such as on his first day, when a superior told him, “I don’t like Arabs, I don’t like Black people.”

But thanks to the Army’s close living quarters and sense of solidarity, Nassim now counts this man as a friend. “In the military, you work alongside people who grew up in the city and in the middle of the countryside, from all social classes,” says Nassim. “I’m trying to change people’s mentality bit by bit, to stop these stereotypes. You have to plant seeds everywhere.”