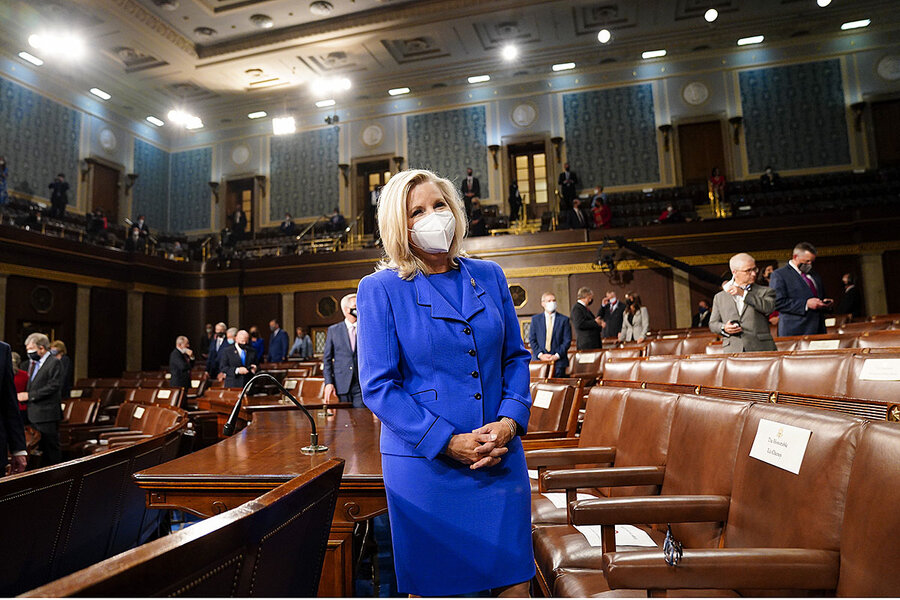 In statements and public appearances, Mr. Trump continues to insist, without evidence, that the election was stolen from him. As he solidifies his hold over the GOP and pushes aside such discordant voices as Representative Cheney he appears to be setting up a situation where in future elections one party may question the legitimacy of any vote it loses.

“In a macro sense, a country in which election results remain controversial months after it’s over, that’s a country that’s in trouble,” says David Karol, a professor of government and politics at the University of Maryland, College Park.

“Reverence for the rule of law”

Representative Cheney’s ouster from the position of chair of the House Republican Conference, the third-ranking party post in the chamber, now seems all but inevitable. Second-ranking leadership member Rep. Steve Scalise of Louisiana has called for her removal and she has clearly lost the support of Minority Leader Kevin McCarthy of California, who defended her in February after she voted to impeach Mr. Trump on charges he helped instigate the Jan. 6 Capitol riot.

During impeachment proceedings Representative McCarthy himself said that Mr. Trump should “accept his share of responsibility” for the attack. But like some other Republicans who criticized Mr. Trump at the time, such as former United Nations Ambassador Nikki Haley, Representative McCarthy quickly downplayed that position in the face of Mr. Trump’s continued popularity with Republican voters and his anger with party figures who question his false election statements.

House Republicans have a real chance of retaking the majority in 2022 midterms. With that in mind, many in the caucus say they have grown frustrated that Representative Cheney continues to speak out against Mr. Trump in interviews and criticize fellow Republicans for implicitly accepting the former president’s falsehoods.

Representative Cheney herself maintains that remaining silent about an attack she and her colleagues witnessed will do profound, long-term damage to both the Republican Party and the country.

“I am a conservative Republican, and the most conservative of conservative values is reverence for the rule of law,” wrote Representative Cheney in a blunt opinion piece Wednesday in The Washington Post.

In an electoral sense the uproar over Representative Cheney is unlikely to matter, notes Professor Karol, who studies American parties, interest groups, and political development. Despite her lineage she is not a well-known figure among the electorate at large. The status of party House leadership is not a big issue per se. The next election is a year and a half away, plenty of time for even high-information voters to forget her ouster.

But the affair does demonstrate that remaining critical of Mr. Trump for long is dangerous for ambitious Republicans. If there was ever a civil war within the GOP between establishment figures and Trump supporters, then the Trump supporters have won.

“The fact now is that there won’t be anyone prominent in House leadership who won’t stand up and defend Trump. That’s important,” says Professor Karol.

It also shows the apparent declining importance of ideology within the party. Representative Cheney is a model conservative; in her opinion piece Wednesday she decried the “ridiculous wokeness” of Democrats. She voted in line with Mr. Trump’s policy positions 93% of the time, according to a FiveThirtyEight data analysis.

The front-runner to replace her, Rep. Elise Stefanik of New York, began her congressional career in 2015 as a moderate. She voted with Mr. Trump’s policy positions only 78% of the time, according to FiveThirtyEight.

Where Representative Stefanik has surpassed Representative Cheney is in fealty to the former president’s election claims. Prior to the Jan. 6 riot, she released a statement explaining why she would vote against certification of the Electoral College votes. It contained numerous errors, and claimed falsely that 140,000 votes came from underage, dead, or otherwise ineligible voters in one Georgia county alone. The spokesperson for Georgia’s Republican secretary of state told The Washington Post’s fact-checker her claims were “ludicrous.”

During an appearance on Steve Bannon’s radio show this week Representative Stefanik also noted that she fully supports “the audit in Arizona.”

Republicans in the Arizona state Senate are behind this controversial recount and audit. They subpoenaed 2.1 million ballots from Maricopa County and turned them over to a small cybersecurity firm, Cyber Ninjas, that critics say is not up to the job, and which has been linked to social media posts embracing Mr. Trump’s election falsehoods.

That recount is running far behind initial time estimates. Justice Department officials have expressed concerns that it may violate federal laws.

It is also using a special camera to try to detect whether there are particles of bamboo in ballot paper, according to John Brakey, an official helping oversee the audit. The point is to check a charge made without evidence that some 40,000 ballots were smuggled into Arizona from Asia.

Arizona’s Democratic Secretary of State Katie Hobbs on Wednesday produced a six-page letter of problems she said observers had noted at the audit, including unattended and unsecured laptops, and untrained workers using different procedures for counting.

“There doesn’t appear to be any plan or consistency in the audit procedures,” she wrote to former Arizona Secretary of State Ken Bennett, a Republican who is acting as an audit spokesperson.

Meanwhile, some of the Republican-initiated voting bills enacted or under consideration in states across the country would increase the ability of state legislatures to control or affect election procedures.

The recently passed Georgia bill, for instance, removes the secretary of state from control of the State Election Board, replacing him or her with a chairman appointed by the Georgia House and Senate. It also empowers the legislature, currently controlled by Republicans, to suspend county or municipal election superintendents and appoint temporary replacements, though the bar for such actions is set high.

Added up, where are these things taking the Republican Party, and by extension American democracy as a whole?

“I’m not optimistic in the short to medium term,” says Brian Klaas, an associate professor in global politics at University College London, in an email.

The political dynamics in the Republican Party have created a self-reinforcing authoritarian loop, he says. Telling the truth about the 2020 election is a surefire path to pariah status for GOP officials. Repeating Mr. Trump’s falsehoods about the vote is not just required, but encouraged, in the sense that it can lead to advancement in the party and stardom in conservative media.

Institutional reforms within the party or the American election system could break the link between “authoritarian lunacy” and personal advancement.

“But for now, those reforms seem highly unlikely and I am worried that the Republican trajectory will continue to worsen,” says Professor Klaas.