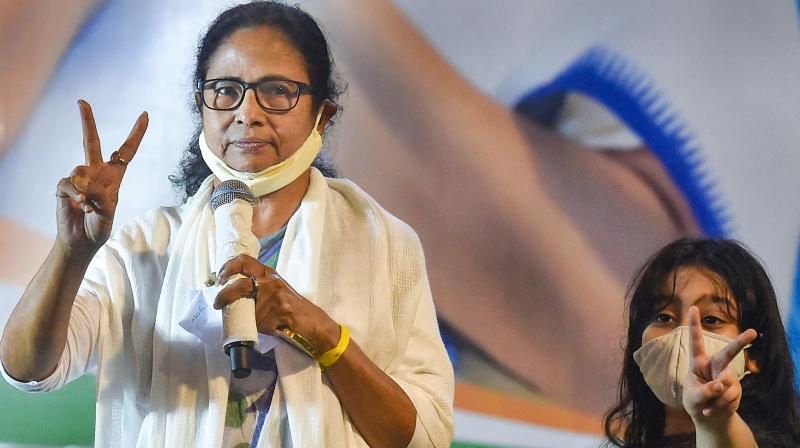 New Delhi: The victory of the Trinamul Congress, DMK and LDF in West Bengal, Tamil Nadu and Kerala have given rise to the possibility of the Opposition parties coming together to form a Federal Front to take on the ruling BJP-led NDA in the 2024 Lok Sabha polls. While Trinamul Congress chief Mamata Banerjee returned to power by trouncing the BJP in West Bengal for the third time, the LDF led by chief minister Pinarayi Vijayan created history with his second consecutive electoral victory. In Tamil Nadu, DMK leader M.K. Stalin convincingly defeated the BJP-backed ruling AIADMK to form the government in the state.

The momentum to give the front, or a grand alliance, a proper shape will pick up once the Covid-19 crisis is contained.

Speculation is rife that Prashant Kishor, the poll strategist and architect of the victories of Mamata Banerjee and M.K. Stalin in West Bengal and Tamil Nadu could play a key role in “conjuring up” a grand Opposition alliance. After guiding Ms Banerjee to her spectacular victory in the high-voltage West Bengal elections, Mr Kishor in a TV interview declared that he would “quit this space” — of election strategising for political parties.

Meanwhile, as most of the Opposition parties appeared to be responsive to the idea of a federal front, it’s the Congress Party led by the Gandhis which seemed to be somewhat reluctant.

A senior Congress leader, who is part of the pressure group (G-23), went to the extent of saying that the Congress could even “split” on the issue of a regional satrap-led Federal Front. He argued that even though the Congress had been “neutralised and lost its clout in the Opposition space, the family would still try to control the narrative”. He said that the only way for Congressmen to support such a federal front was to “bypass the family.” He then added: “At the end, Congress could split.”

Talking about Opposition unity, TMC Rajya Sabha MP Sukhendu Sekhar Roy too expressed his reservations about the Congress. “We don’t trust the Congress,” he said. “On one hand the Congress projects a secular image and on the other they join hands with fundamentalist outfits like Abbas Siddiqui’s Indian Secular Front in West Bengal and the Muslim League in Kerala for political gains,” he pointed out. Mr Roy said that the Congress has to go in for a “course correction” if it wanted to play any significant role in Opposition unity.

On forming an Opposition front, Mr Roy felt that it has to be done on the lines of Opposition unity in 1977. He maintained that all the Opposition parties need to come under one umbrella. Besides major regional and Opposition outfits, which include the RJD, Samajwadi Party, BSP, TMC, BJD, NCP, DMK, TRS, YSR Congress, Shiv Sena and CPI(ML), there are a few hundred smaller regional outfits. “There are over 2,000 big and small regional parties. All these outfits need to come on one platform to challenge the tyrannical rule of Narendra Modi and Amit Shah,” he said. Saying that the Congress continued to remain an “important player” at the national level, Mr Roy hoped that the party would get off its high horse and play a “supporting role”.

Mr Roy insisted that there has to be a Common Minimum Programme (CMP) focusing mainly on the economy and how to contain the divisive politics of the BJP. The slogan of “Modi hatao” would not work, he said. It can be mentioned that in 1972, the then Opposition raised the slogan of “Indira hatao”, which Indira Gandhi successfully countered with her slogan of “Garibi hatao”. People voted to removed poverty, not Indira. Mr Roy said that the catchphrase needed to be something like “desh bachao” (save the nation).

On the issue of Ms Banerjee emerging as the face of the Opposition, Mr Roy argued that the West Bengal poll results had a “national impact”. Even though DMK leader M.K. Stalin “won a great victory”, his electoral triumph was a “foregone conclusion”, he said. In contrast, Ms Banerjee was up against the entire might of the Centre and its machinery. “It was a direct fight between Modi and Mamata,” he said.

Speaking to this newspaper, CPI(ML) leader Dipankar Bhattacharya also said that the victory of Mamata Banerjee in West Bengal had a “major national impact”. He pointed out that even the farmers protesting in North India distributed sweets to celebrate her victory. “They celebrated even though the farmers’ issue hardly figured in the TMC campaign,” the CPI(ML) leader said.

On the issue of CPI(M), Mr Bhattacharya pointed out that at the national level, the Left generally “supports” Opposition unity. He felt that the “CPI(M) cannot afford to make Mamata Banerjee taboo” and pull in a different direction.

The CPI(ML) leader hoped that if there was a move to form a grand Opposition alliance, both the Congress and the Left would “change their outlook” and join the bandwagon.

On Prashant Kishor playing the key role in forming a grand alliance or federal front, Mr Roy felt it was an “excellent idea”. Mr Roy said that Mr Kishor has a “great political mind… and was a brilliant strategist”. Mr Bhattacharya toed a similar line by saying that “even though I don’t know much about the role he played, but what he did in Bengal was simply excellent”. After the alarm bells rang for the TMC in 2019, “it was Kishor who strategised for the TMC, which eventually resulted in this stupendous victory”, the CPI(ML) leader added.