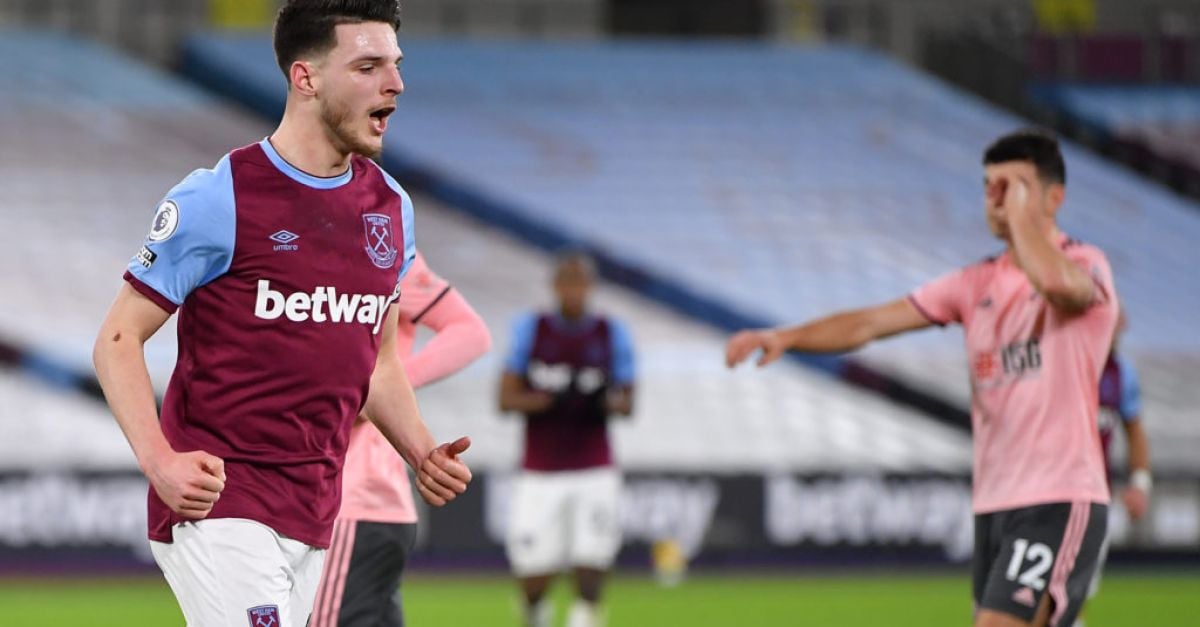 Declan Rice is back in training and poised to give West Ham’s Champions League push a major boost.

The England international has not played since suffering a knee injury at the end of March.

Boss David Moyes is confident Rice will return to play a big role in the run-in and did not rule the 21-year-old out of Sunday’s visit of Everton.

“We’re getting closer to getting Declan back because we’re a week down the line,” said Moyes.

“He’s back on the grass and closing in on it and we’ll try and get him back as soon as we can.

“Undoubtedly he’s a big miss to us and we’ll try and get him back as quickly as we can. I’m just hoping to have him available. I’m not going put any time on it.

“I’m not trying to bluff anybody but in the same breath I’ve got to be really wary of it. He is so important for us, we have to get him back as quickly as we can.

“We need him, he can make the difference in the games – and there’s a big game coming up this weekend for a starter.”

With Michail Antonio back to fitness, and form following his two goals against Burnley on Monday, Moyes is close to having his first-choice side available for the last four matches.

“Michail is so important to us and he has been ever since we’ve put him in at centre forward,” added Moyes.

“He was roughly the top goalscorer around those nine games after lockdown and he’s been very good this season too.

“Unfortunately we’ve lost him a few times to injury as well, but he’s back and in good spirits and we’ll hope that form continues to the end of the season.”

Everton will arrive at the London Stadium still harbouring ambitions of climbing above West Ham into the European shake-up.

Moyes, who managed the Toffees for 11 years, said: “We’re both fighting for Europe and I hope West Ham can make it, so we’ve got to keep playing well and give ourselves that chance.

“You’ll see two sides who know the importance of winning the game. They’ll realise if they beat us they have a chance of getting above us and we know we can put some distance to them, but we’re also looking above us and looking to catch those teams.”