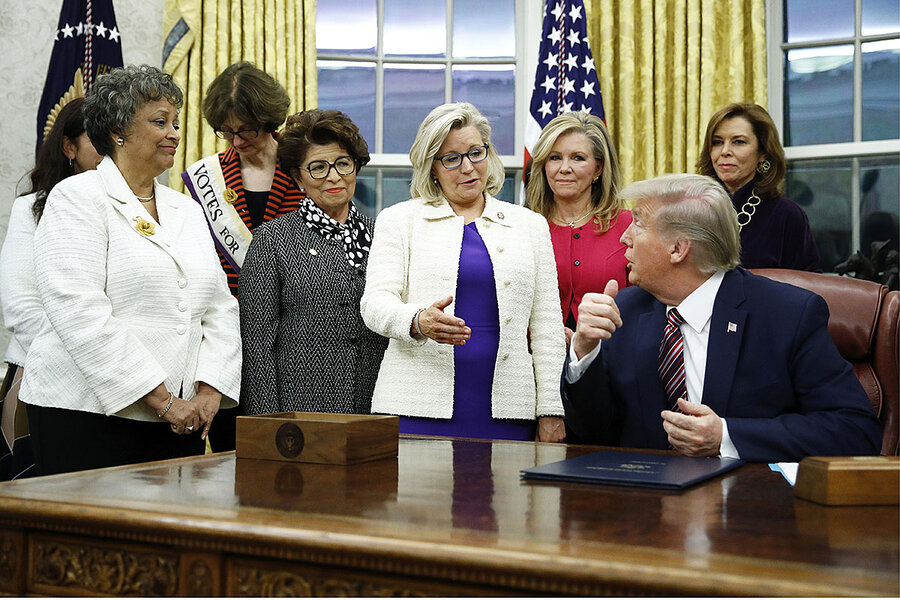 Just a few months ago, Rep. Liz Cheney – scion of one of the most influential vice presidents in history – beat back an attempt to oust her from Republican House leadership after she cast what she described as a “vote of conscience” to impeach former President Donald Trump for his role in the Jan. 6 attack on the U.S. Capitol.

Now she is facing another challenge. And this time, she may have a far harder time prevailing, with GOP leaders already coalescing around a younger, Trumpier successor.

Ms. Cheney’s insistence on refuting the former president’s unproven claims of election fraud – which polls show a majority of Republican voters believe – has frustrated even some erstwhile supporters. At a time when the GOP is tantalizingly close to retaking the House in 2022, they say she is endangering the party’s future by re-litigating the past. They would prefer to see her directing her firepower against President Joe Biden’s $6 trillion progressive agenda, not fist-bumping him on the floor of the House while characterizing Mr. Trump as a threat to democracy.

What happens when a lawmaker’s principles and her voters’ wishes are at odds with one another? Liz Cheney has refused to embrace what she calls the “big lie,” even though it may cost her her GOP leadership position.

The rift is the latest twist in an ongoing, multi-year struggle over the direction of the Republican Party, with Mr. Trump continuing to exert his dominance even after losing the White House. And it has raised new questions – among them, whether it is an abrogation of a leader’s duty to take a sustained stand for principle that conflicts with the will of her voters and fellow lawmakers.

“I’m all for principled stands. Any member of Congress can take any vote they want as long as they can explain it and defend it,” says Matt Mackowiak, a Republican political consultant based in Austin, Texas, and Washington, D.C., who characterizes Jan. 6 as the third-worst day in U.S. history after Pearl Harbor and 9/11. But, he adds, echoing a favorite line of former House Speaker John Boehner, “a leader without followers is a guy taking a walk, and right now she’s taking a walk.”

He calls Ms. Cheney “deeply principled and substantive, and exceedingly bright,” adding that someone with that mix of skills is an asset on the GOP leadership team.

But he doubts her stance will actually persuade any voters who believe Mr. Trump’s narrative. “One member of Congress from Wyoming is not going to change voters’ views on this.”

Still, Ms. Cheney seems determined to try. And she’s made it clear that she is willing to risk a promising political future in an attempt to save her party from what she sees as dangerous erosion of democratic principles.

In an op-ed for The Washington Post this week, Ms. Cheney described this moment as a critical juncture for the GOP.

“The Republican Party is at a turning point, and Republicans must decide whether we are going to choose truth and fidelity to the Constitution,” she wrote. “We must be brave enough to defend the basic principles that underpin and protect our freedom and our democratic process. I am committed to doing that, no matter what the short-term political consequences might be.”

Debate over Trump’s role in GOP

The split reemerged after a House GOP retreat in Florida, where Ms. Cheney was clearly at odds with Minority Leader Kevin McCarthy of California, who had initially blamed Mr. Trump for his role on Jan. 6 but later softened his stance. He had supported Ms. Cheney in the earlier challenge to her leadership position, which she survived in a 145-61 vote. But this week he was caught on mic saying he’d “had it” with her.

Much of the debate has centered around the party’s ongoing relationship with Mr. Trump. Do they need his help to win in 2022 – or at least make sure not to alienate him and draw his wrath? Should they downplay his election fraud claims – which numerous Trump-appointed judges dismissed as baseless – or embrace them?

Ms. Cheney’s larger beef appears to be not only with Mr. Trump’s “big lie” about the 2020 election, as she put it, but what she sees as Mr. Trump’s anti-democratic tendencies and the danger his rhetoric and actions pose not just to the GOP but to the country. The New Yorker reported May 6, citing a source close to the Cheney family, that it was Ms. Cheney who “secretly orchestrated an unprecedented op-ed in The Washington Post by all ten living former Defense Secretaries, including her father, warning against Trump’s efforts to politicize the military.” That op-ed ran three days before the Jan. 6 attack on the Capitol.

Henry Olsen, a senior fellow at the conservative Ethics and Public Policy Center in Washington, believes Ms. Cheney’s concerns are genuine. But he also sees her and her allies as essentially being in denial about the trajectory of the Republican Party in recent years, by viewing the Trump years as “an aberration.”

“The Republican establishment wants to treat the last six years of Trump as the political version of the ‘Dallas’ dream season,” says Mr. Olsen.

Some Republicans who supported Ms. Cheney after her impeachment vote now say she is distracting from party priorities by crossing swords with Mr. Trump when much of the party leadership would just like to move on after a turbulent four years.

“There’s no concern about how she voted on impeachment. That decision has been made,” Representative McCarthy said. “I have heard from members concerned about her ability to carry out the job as conference chair, to carry out the message.”

GOP House leaders are now backing New York Rep. Elise Stefanik, a onetime protégé of former Speaker Paul Ryan, who entered the House as a moderate but went on to embrace Mr. Trump, winning his public endorsement this week. She seems all but certain to replace Ms. Cheney in a GOP conference vote next week.

But if the problem with Ms. Cheney is her focus on the past, then Ms. Cheney’s supporters want to know why Republicans are backing Ms. Stefanik, who this week went on Steve Bannon’s radio show and expressed support for Arizona’s controversial election “audit.”

“They’re the ones who are putting Trump front and center,” says former GOP Rep. Barbara Comstock, who represented a Virginia swing district from 2015-19. “He wants to make this a cult about him and that’s what the Republicans are allowing to happen.”

Ms. Comstock says she personally heard from GOP members in November and December that they knew his claims about election fraud were not true, but felt they had to humor him and play along in order to get his support in the 2022 midterms. “Playing along with someone who’s living in fantasy land and thinks he’s still president is not working,” she says.

“The emperor has no clothes and she knows that,” says former Wyoming Sen. Alan Simpson, who represented the state along with her father, former Vice President Dick Cheney, and has known Ms. Cheney since she was a little girl. “She’s speaking with great clarity from her internal gyroscope.”

Ironically, Ms. Cheney voted in accord with Mr. Trump more often than her favored replacement – 92.9% of the time compared with Ms. Stefanik’s 77.7%, according to an analysis by data analysis website FiveThirtyEight.com. The Lugar Center ranks Ms. Stefanik as the 13th most bipartisan member of Congress, while Ms. Cheney sits at 421st out of 435 House members – something that normally might be seen as a sign of the latter’s conservative bona fides.

But Ms. Stefanik caught Mr. Trump’s attention with her impassioned criticism of the 2019 impeachment proceedings against him, and again voted against impeaching him in a hastily brought trial after the Jan. 6 attack this year. Ms. Cheney was one of 10 GOP members of the House who voted for impeaching the president.

The stakes in Wyoming

Back in Wyoming, where Mr. Trump won 70% of the vote, Ms. Cheney’s impeachment vote did not play well. Rivals immediately began announcing plans to challenge her in the 2022 election for Wyoming’s sole representative to Congress, and a Trump-affiliated pollster found that Ms. Cheney would lose 21-54 to one of them and do only slightly better against another.

“She’s risked her political future in Wyoming,” says Professor James King at the University of Wyoming in Laramie, whose areas of research include the effects of congressional candidates attacking the president. Still, he thinks that with her smarts and strong base Ms. Cheney could potentially pull through.

“She did not get elected … simply because her last name is Cheney,” he says.

Tony Barton, a Republican county commissioner in Weston County in northeastern Wyoming, says that while there’s a vocal portion of constituents upset with Ms. Cheney, he personally agrees with her – and thinks she may have more support in the state than it seems.

“I think history will find her on the right side of that [issue],” says the father and construction business owner who adds that his first consideration in weighing candidates is their character and integrity. “You do swear an oath to the Constitution.”

Asked whether Ms. Cheney is within her rights as a representative of the people to take a stand that runs against the will of her constituents in Wyoming, Ms. Comstock says it would be one thing to go against them on matters like Western water rates or agricultural issues. But when it comes to a fundamental constitutional question, she says, the calculus is different. Mr. Barton and Professor King agree she has a right to act according to her conscience on this point.

Former Senator Simpson, a 90-year-old dean of Wyoming politics who has seen an election or two, says he believes she will prevail. But even if she doesn’t, it won’t bring her down.

“I have no idea what she will do in the future, but I know she won’t be disheartened by this,” he says. “She’s going to put this down as a badge of courage.”