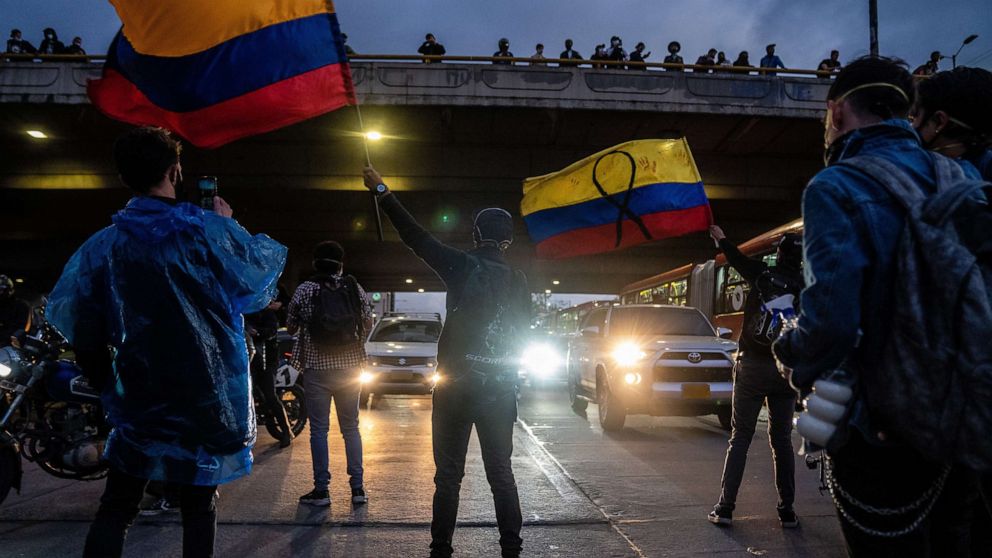 Bloody, violent protests have raged on for 10 days throughout Colombia, leaving at least 26 dead and more than 900 reportedly injured, according to local officials and advocacy groups.

Demonstrations erupted in Bogota, Medellin, Cali and other cities on April 28 decrying President Iván Duque’s proposed tax hike that critics say would raise the price of food and taxes for more middle-class workers. The plan was meant to unburden the government from the COVID-19 pandemic’s financial strain, The Associated Press reported.

But by then, the protest movement had grown, fueled by anger over the violent police response, and now the demands include broad social changes and police reform.

While most of the protests have been peaceful, police have been targeted and several police stations have been burned.

The nation’s Ombudsman Office and Office of the Attorney General reported Thursday 26 deaths in the context of the protests and 145 cases of alleged disappearances, 55 of which have been located and 90 are under verification.

Among the dead is 17-year-old Marcelo Agredo who was allegedly fatally shot by a police officer on April 28 in Cali, Colombia. Video from the incident shows Agredo appearing to kick a police officer sitting on a motorbike before the officer opens fire. A government agency is now investigating his death.

The United National Human Rights office told ABC News it received 22 reports of deaths in the protests since the start of the uprising, including 21 civilians and one police officer. The office said all cases are in the process of being verified.

Local advocacy group Temblores reported 37 deaths in connection with demonstrations, 234 injured and 923 detained in the protests.

Ana, a 34-year-old tourism sector employee in Bogota, who did not wish to disclose her last name for privacy reasons, told ABC News, “What is happening in Colombia is a massacre.”

“The government doesn’t want to listen to us and we have simply no choice,” she said. “I have been walking every day peacefully with friends. We can observe undercover cops … they even tried to shoot us on Monday. I was not injured.”

“I was not a militant before. But we need money to live … we need to go back to work … and we are supposedly in a democracy,” she said.

On Thursday, Colombia’s government invited protest leaders to discuss the demands of the people.

Presidential adviser Miguel Ceballos said the government would meet with the National Strike Committee, which represents various groups including indigenous people, unions, environmentalists and students, to discuss key demands of the people on Monday, according to Blu Radio.

The protests built on previous demonstrations against corruption and inequality in 2019 and against police violence last year. Many of those frustrations were exacerbated during the pandemic as Colombia suffered through waves of the virus that led to lockdowns that strained the economy.

The tax plan aimed to raise $6.7 billion to pay the country’s debts and maintain a basic income scheme for 3 million low-income people that started during the pandemic, The Associated Press reported.

The Colombian economy, crippled by the coronavirus crisis, shrank by 7% last year and the poverty level jumped to 43% from 36%, according to the country’s National Administrative Department of Statistics report. Further, 16.8% of Colombians have been unemployed as of March in 13 major cities and metropolitan areas.

The consecutive days of protests have disrupted supplies of gasoline across the country, the National Federation of Fuel and Energy Distributors (Fendipetroleo) said in a statement, Reuters reported.

“We have seen fuel shortages as a consequence of the national strike,” Fendipetroleo said, listing cities including Cali, Ibague and Pereira, as well as in other municipalities and provinces.

The U.S. has walked a fine line between condemning the loss of life and urging the Colombian government to show restraint — supporting its critical partner in the region reeling from the damage of the coronavirus pandemic, economic collapse and the crisis in neighboring Venezuela.

On Tuesday, U.S. State Department Deputy spokesperson Jalina Porter said the U.S. was “deeply saddened by the loss of life during protests” and defended Colombians’ right to demonstrate.

“All over the world, citizens in democratic countries have the unquestionable right to protest peacefully,” she said.

While “violence and vandalism is an abuse of that right,” she said, the U.S. also urged “the utmost restraint by the public forces to prevent additional loss of life.”

While she stopped short of condemning police and the military’s use of force, Porter said the U.S. recognizes Duque’s “commitment to investigate reports of police excesses and address any violation of human rights” and supports his “government’s efforts to address the current situation through political dialogue.”

The United Nations System in Colombia released a statement Friday denouncing the “disproportionate use of force” reported, calling for “the right of peaceful assembly and to protest to be guaranteed.”

“Any action by security forces must fully observe the protection and respect for human rights,” the statement said.

Colombian celebrities have taken to social media to condemn the government’s and police brutality against protesters.

Shakira tweeted, “Bullets will never be able to silence the voice of the one who suffers. And it is essential that we are not deaf to the cry of our own.”