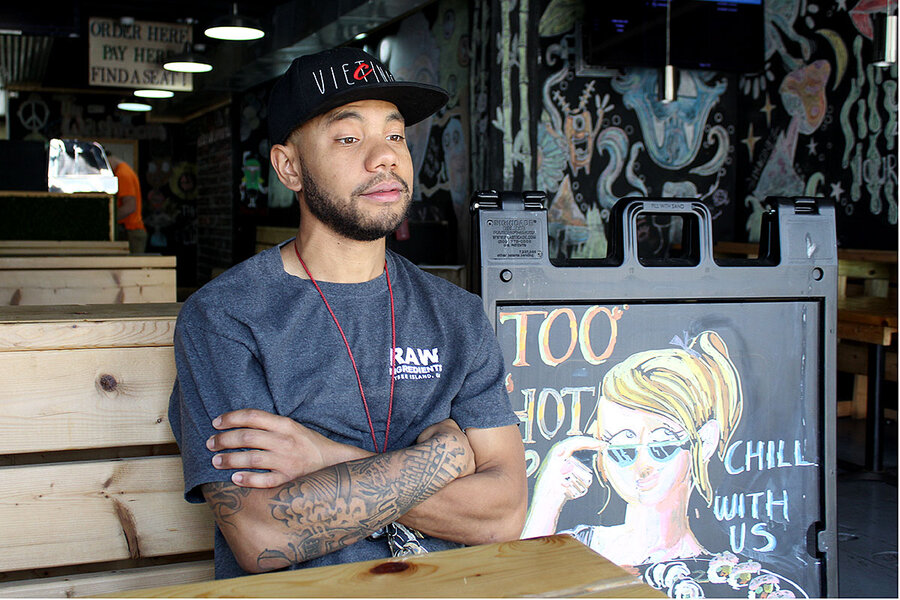 Ian Davis first opened Raw Ingredients sushi bar on Tybee Island, Georgia, five years ago, with a gaggle of local kids among his first customers. Today, as that group of teenagers visits his restaurant, Mr. Davis serves them a quick pitch.

“Let’s put some boots on!” he says. “You like sushi. Time to sling the sushi.”

Amid a nationwide labor shortage, business owners like Mr. Davis say they have little option but to try to turn patrons into employees. He’s already closed one restaurant in an effort to consolidate staff. Competition to hire for the summer season is fierce every year in tourist destinations like Tybee, but locals say it’s never been this intense. Just 4 miles away, the Crab Shack is offering $3,000 signing bonuses.

First restaurant workers were laid off – and reaped special pandemic jobless benefits. Now eateries are desperate to hire them back. Could all this be leading toward better pay in a difficult industry?

“These are desperate times,” says Mr. Davis. “We lost pretty much everybody during the pandemic. So now I’m pulling people off the street.”

But it’s more than rival restaurants keeping his staff from reaching capacity. A mixture of expanded unemployment benefits, the health risks of COVID-19, and economic shifts brought on by the pandemic is hampering the restaurant and hospitality industry, even as demand for its services increases with the rise in vaccinations. Those causes have proved a recipe for a worker shortage from fast-food chains to five-star kitchens.

While experts predict the shortage will abate over time, they say it may also be a rare opportunity for pro-worker changes in the industry. Already, some owners are raising pay, adding benefits, and distributing compensation more evenly – despite the industry’s often-thin profit margins. If such changes outlast the current shortage, some experts say they may give workers a more personal connection to the institutions they help maintain.

“This crisis of trying to find employees to even staff your place – I think it’s raising the bar for a lot of different restaurants to say … ‘We have to think of our model and what can we do to not just attract people, but to keep them here,’” says Ben Fileccia, director of operations and strategy at the Pennsylvania Restaurant & Lodging Association.

On Friday, the Labor Department reported a surprisingly low gain of just 266,000 jobs nationwide in April – with economists attributing the weakness partly to a tight supply of willing workers. With the economy in rebound mode, the consensus forecast had been for a net gain of 1 million jobs.

Industries that have complained the loudest about a shortage of workers – restaurants, hotels, and entertainment venues – were able to add 331,000 jobs in April (while some other industries reduced overall employment). That comes nowhere near to meeting their surge in demand for new hires. Just this week, for example, restaurant chain KFC announced plans to add 20,000 workers.

How pandemic reshaped an industry

Hiring shortages are familiar in the restaurant and hospitality industry, so dependent on cyclical shifts in demand. Approaching peak season, employers compete each year for a shared pool of applicants. Positions are often temporary, whether by choice of the employer or the workers themselves.

“The restaurant industry historically has had uniquely high turnover,” writes Culinary Agents founder and CEO Alice Cheng in an email. “Pre-pandemic recruiting and retention were always ongoing challenges for most hospitality businesses.”

The coronavirus initially turned that challenge on its head. With lockdowns, restaurants furloughed much of their staff. And searching for a more stable income, many workers either moved or even left the field, says Michael Traud, program director at Drexel University’s department of food and hospitality management.

Yet a year later, the pandemic has intensified the problem it once took away. “In January, 7% of restaurant operators rated recruitment and retention of workforce as their top challenge; by April that number had risen to 57%,” writes Hudson Riehle, senior vice president for research at the National Restaurant Association, in an email.

With coronavirus cases decreasing and vaccinations continuing to rise, many Americans want to make up for a lost year of dining out and traveling. Restaurants and hotels are opening or reopening to meet the demand, which means competition for workers is higher than ever.

“All of a sudden the job market is just flooded with openings and we’ve never seen that,” says Mr. Fileccia.

Expanded unemployment aid, extended under President Joe Biden’s American Rescue Plan, gives some Americans an incentive to stay home rather than take a low-paying job. Those payments last until early September, and may be extended further.

Many conservatives say that overgenerous unemployment assistance is harming the economy. Governors in South Carolina and Montana moved this week to end pandemic jobless benefits.

“This tragedy is what happens when Washington know-it-alls decide to pretend they’re generous by paying more for unemployment than for work,” said GOP Sen. Ben Sasse of Nebraska in a statement Friday, referring to the nation’s worker shortages.

Mr. Davis, on Tybee Island, thinks generous jobless benefits have chilled the hiring process. For part of last year, potential servers could collect about $900 a week on unemployment – about $300 more than what many expect to make on the job. (Nationally, average hourly pay for a server is $13.20, according to the Bureau of Labor Statistics.) Employees may return when the supplemental payments phase out, but by then, Mr. David says, they may expect more than he’s able to pay.

At the same time, persistent school closures and limited child care prevent many others from leaving home in the first place. Concern over COVID-19 also remains high, and the jobs themselves have become more difficult. Employees must wear masks and cover more territory in socially distant or outdoor dining areas. Some workers have simply moved on to other industries where jobs have opened up – in some cases to larger employers like Amazon where pay or benefits are stronger.

After more than a decade in some of Atlanta’s renowned kitchens, former executive chef Brian Carson left the industry a month ago after reaching an “impasse” with owners over hours and pay.

In his opinion, the current worker shortage is “no different than a strike.”

“You fired these folks a year ago,” he says, “and now you’re mad that they don’t want to come back and do the same [tough] job for the same crappy pay?”

Opportunity for a reset of working conditions?

A lifelong “food nerd,” Mr. Carson still watches his former line of work from afar and hopes the nearly 14 million workers in the industry can bargain for better conditions. A nationwide hiring shortage may offer the right time to attempt just that.

“Now there is opportunity for businesses to revisit what is working and address the changes that need to be made in order to grow and thrive,” writes Ms. Cheng. “Those who continue to prioritize their teams will attract the workers they’re hoping for.”

In turn, teams that feel prioritized tend to stay in their jobs longer, says Mr. Fileccia.

Signing and referral bonuses, higher pay (for the front and back of the house), and benefits like insurance and a 401(k) could help ease the employee shortage now, and create a more stable workforce. For those who already aspire to enter the industry, the shortage also offers a chance to pick and choose among employers.

But there’s no such thing as a free lunch, says Mr. Fileccia, and for pay to rise, consumers will have to eat the cost. Customers have grown used to the price of their meals remaining stable, he says. Prices haven’t risen dramatically in the past 20 years.

“I’m hoping this past year, if it’s done anything, has shown how fragile this industry is,” says Mr. Fileccia. “We do need to get buy-in from guests to say, ‘Listen, when we want to go out, we’re going to have to pay more.’”

Closing a restaurant showed Mr. Davis the industry’s fragility firsthand. He hopes more workers find their way into his kitchen, without him having to goad them off the street.

He can’t compete with lavish signing bonuses offered elsewhere, or even pay much above minimum wage. But he can provide a close-knit “family atmosphere,” respect, and maybe even some sushi on the side.

For his restaurant, and the industry at large, he hopes there are employees out there looking for the same.

“The idea that there’s too much work and too little pay for you to return, that would be an ugly balloon” for the industry, he says. Nurturing a new generation of workers to embrace restaurant work, he says, is “the hardest thing.”