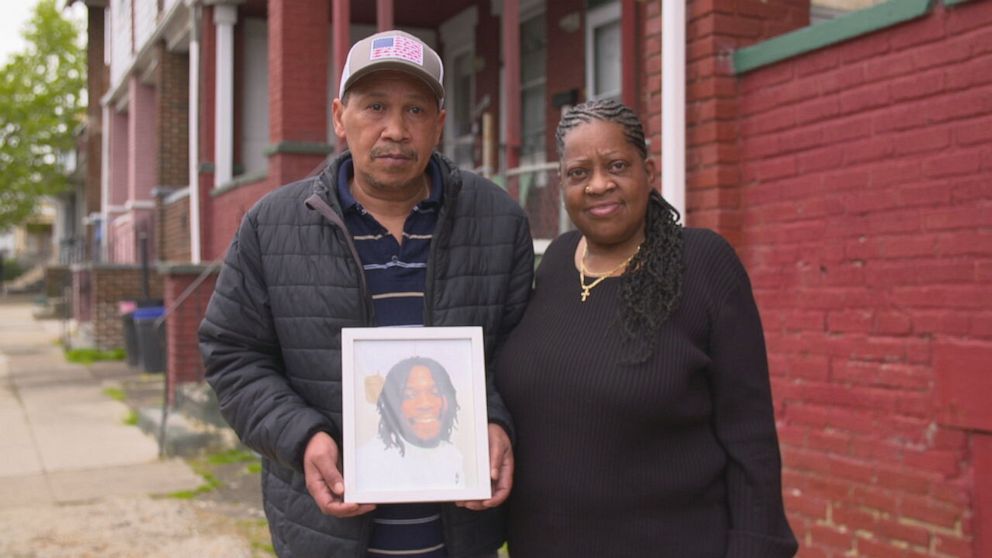 “He’s mental,” were some of the last words Walter Wallace Jr. heard before he was shot 14 times by a Philadelphia police officer.

On Oct. 26, 2020, less than a month after marrying his pregnant wife Dominique, Wallace was shot by police in West Philadelphia while experiencing a mental health crisis.

His death, caught on video by police body camera and by residents on his block, caused an avalanche of protests in the city.

“It’s a hard pill to swallow, you know what I mean? I was thinking about my kids burying me and I had to bury my kids. No parent should have to go through that,” Walter Wallace Sr. said, speaking out for the first time with ABC News. “It’s like the devil’s ridin’ over your back.”

His son had a history of mental illness since he was a child. He was diagnosed with bipolar disorder and ADHD at a young age and was taking multiple medications, including Adderall.

“He was funny. He liked to play basketball. I mean, he liked to rap for sure. He loved making music and he didn’t care about what nobody said about him at all. … He was happy with himself,” Kaseem Nelson, one of Wallace Jr.’s best friends, told “Nightline.” “He was an all-around good person. I don’t know, as far as flaws I didn’t see too many. He was my brother that was it.”

As an adult, he was diagnosed with schizophrenia and bipolar disorder.

According to his family, whenever Wallace Jr. would have a mental episode, they would call an ambulance and request an emergency evaluation and treatment for mental illness.

Bilal Nelson, Kaseem’s brother and another one of Wallace Jr.’s friends, said it didn’t take much to get Wallace Jr. upset, especially when they were younger.

“I will always get him to calm down and try to get him to see it from my point of view,” Villa Nelson said. “He would always tell me, ‘Little bro I need you.’ … Basically, I was able to calm him down because when he’s mad, he’s not thinking, all he wanted to do was react.”

“I was never afraid of him,” he added.

On that day in October 2020, Wallace Jr.’s sister and brother both called 911. His sister told dispatchers her brother had a record, was on probation, and had been violent. She said he was attacking his mother and the dispatcher said she would send help.

With the knife in his hand, Wallace Jr. walked out of his home where his neighbors and loved ones were outside. Seconds after police arrived, his wife yelled, “he’s mental,” attempting to warn them her husband needed help, she later told “Nightline.”

Police arrived on the scene and asked Wallace Jr.’s mother what was happening, to which she responded “He came outside. he had the knife in his hand.” The police asked him to put the knife down more than 12 times, body camera video showed.

Less than a minute on scene, the two police officers on site released 14 bullets. Ten of them hit Wallace Jr. and he died at the scene.

“The sister actually tells the 911 dispatcher that the suspect has a record. Was it a criminal record? Was it a medical record?” Gonzales said. “It was the 911 one dispatch, in my opinion, who failed to ask the right questions so that the police officer can be armed on how to deal with this particular situation.”

In addition to being ill-informed, the officers were also ill-equipped. In Philadelphia, most officers are not issued less lethal forms of force, like a stun gun. Gonzalez said the only option they could use to disarm him at that point was their guns.

“I believe when he failed to comply after maybe the sixth or seventh attempt, they realized that he was never going to drop the knife,” Gonzales said. “Then you need to use deadly physical force. And it appears that’s what these officers did in this particular situation. So in my opinion, this was a justified shooting.”

But Gonzales says before deadly force, there should be other deescalation tactics employed.

With her son on the floor gasping his last breaths, his mother Kathy Bryant lunged at the officer.

“Why would you do that? I told you he was mental!” said Dominique Wallace.

“If Tasers had been around, if those officers had been Taser-trained and certified, he would very likely be alive,” said the family’s attorney Shaka Johnson, a former police detective.

“How are we now four to five months, six months, removed from that shooting, and you still have not implemented required training and required equipment issues at the academy level for less-lethal options? How have you not done that?” he added.

In 2015, the Office of Community Oriented Policing Services worked with the Justice Department, concluding all Philadelphia officers should be equipped with less-lethal options like Tasers. They also said not having these options makes officers “more likely to use deadly force.”

Philadelphia Police Commissioner Danielle Outlaw arrived on scene shortly after the shooting to address the crowd. Outlaw is the first Black female police commissioner in the department’s over 200 years.

“There was a community on scene. There was family there that had witnessed it as well,” Outlaw told “Nightline” co-anchor Juju Chang. “I generally respond to all critical incidents in which there is a discharge of a firearm, where there’s police involved. But it was really important for me to be there because there was a lot of emotion there. There was a lot of community out there and they wanted answers.”

Outlaw met with the Wallace family and their attorney to review the body camera footage in the following weeks.

After the family’s approval, on Nov. 5, she made the decision to release the video publicly just two weeks after the incident, along with the 911 calls. It was the first time in Philadelphia police history that this kind of video would be released to the public.

“To think about how a call for help ends up part of a death sequence is chilling,” said Marc Lamont Hill, professor of media studies and urban education at Temple University. “But it’s very much what it means to be in America as a Black person and as a person with mental illness.”

Outlaw said she has made the request for police officers in the city to be equipped with stun guns, but said the department’s budget has yet to be approved by the city council.

“I have made the request,” said Outlaw. “It costs approximately $14 million over a period of five years to get everyone in patrol at least outfitted with Tasers. We did put that request forward.”

The city will decide whether to approve the budget in June.

The Wallace family is suing the officers involved for wrongful death. They are asking for reform and plan to file a separate federal lawsuit.

The family attorney is asking for specific changes within the city’s police department.

The Wallace family just wants justice to be served for their son.

“Justice need[s] to be served and the cops need to be locked up for what they did to him,” said Bryant. “I can’t touch him. I can’t hug him. I just can’t see him no more. And it hurts me so bad. You don’t know how much I really miss my son. I miss him so much. Sometimes I wish I could just hear the bell ring.”

“Charged, that’s right. Do it,” said Wallace Sr. “[Be]cause had it been me [who] shot a cop, and did kill a cop, they would have prosecuted me to the fullest.”

Kaseem Nelson remembered the last time they saw each other, just days before the shooting.

“We was talking and it’s crazy because I was telling him that I was proud,” he said. “I was happy to see him doing good … when I was with him … I was just with somebody that was cool, he was like my big brother.”