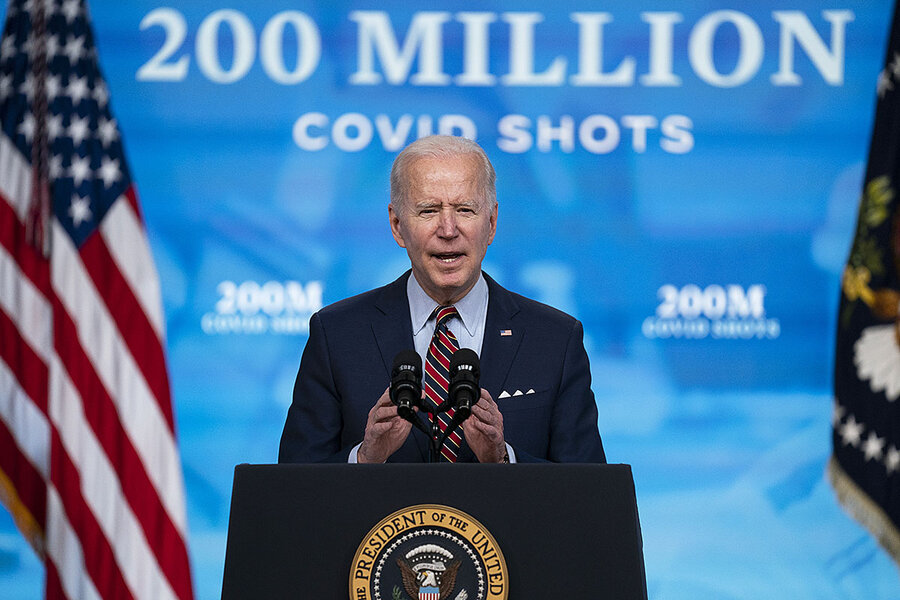 “Absolutely, positively,” Mr. Biden responded. “This is the only humane thing in the world to do.”

At the time, his unequivocal response staked out the moral high ground of the controversial issue of vaccine patents and pharmaceutical companies’ intellectual property rights. The Trump administration opposed any patent waivers for vaccines that in the summer of 2020 were still only in development.

But Wednesday, when President Biden announced through trade representative Katherine Tai that the United States would support a World Trade Organization (WTO) emergency waiver of COVID-19 vaccine patents, the decision was about more than “the right thing to do,” as the president would say.

For some global health experts and international political analysts, the decision reflects something else as well: Mr. Biden’s vision, sharpened over the first three months of his tenure, of refurbishing and reasserting U.S. global leadership.

The larger message the president is sending with the vaccine waiver, some experts say: The coronavirus pandemic is the latest and most urgent of a list of global challenges that will require a strong and complex multilateral response, and the U.S. intends to reclaim the mantle of leader on these issues.

“I see this as an important signal that we’re stepping up our international engagement and intend to put the U.S. back in the driver’s seat” of the multilateral system, says J. Stephen Morrison, director of the Global Health Policy Center at the Center for Strategic and International Studies in Washington.

“This is not saying international property rights are not important,” he adds, “it’s saying [the U.S.] is not leaving the solution to market forces – and that political leadership needs to step up and shape the future on this.”

No one – including in the Biden administration – is touting a patent waiver as a quick or be-all solution to the global vaccine gap that experts say will be acute for at least the coming six months.

For one thing, WTO debate over a waiver to the body’s Agreement on Trade-Related Aspects of Intellectual Property Rights, or TRIPS, is likely to drag on for months. That’s precious time during which the world will be nervously watching the evolution of India’s current catastrophic second wave, plus pandemic inroads in other poor countries with weak health systems.

As Mr. Morrison notes, what’s needed as much or more than a waiver is a “complex combination” of high-tech transfer, greater production capacity, an expanded high-skilled workforce in many countries, and smoother supply chains of critical materials for vaccine production.

But President Biden’s decision to put U.S. muscle behind a patent waiver altered the global debate and shifted perceptions of the U.S. in one fell swoop, others say.

“This is something that will really boost Biden’s reputation as a global leader,” says Lawrence Gostin, director of the O’Neill Institute for National and Global Health Law at Georgetown University. “It’s got enormous symbolic resonance.”

Noting that respect for intellectual property (IP) rights has long been a bone of contention between the wealthy (and generally patent-holding) North and the developing South, Dr. Gostin says, “I never thought I’d ever see the day that an American president would support waiver of intellectual property” rights.

Mr. Biden’s surprise move has received mixed reviews, from high praise – generally from the developing world – to rejection and protests that scarce raw materials and weak global supply chains are more to blame than IP rights for the dearth of vaccines outside the rich, developed countries.

In South Africa – which joined with India in October to propose the WTO approve a temporary suspension of IP protections for vaccine production – Mr. Biden’s move drew guarded optimism.

“The U.S. coming out with statements in support of the waiver is massive and it will have a trickle-down effect on other countries” that had previously opposed it, said Umunyana Rugege, executive director of Section 27, a health activist organization in South Africa, in remarks Friday to journalists.

She noted that since the U.S. announced its support for the waiver, New Zealand and France have come out in favor as well.

Still others, like the Brookings Institution’s Kavita Patel, note that the major vaccine manufacturers were the beneficiaries of billions of dollars in vaccine research and development funding from G20 countries (major but not necessarily wealthy economies), so it is only right that they and their populations benefit from that participation.

Response to President Biden’s move from other developed countries with strong pharmaceutical industries has been mixed.

The European Union offered lukewarm support, saying it was open to exploring a waiver of vaccine patents at the WTO. But German Chancellor Angela Merkel came out flatly opposed, championing instead the traditional developed-world position that IP rights are a “source of innovation” and must be protected as a critical tool for addressing the pandemic and future global challenges.

As some global health experts note, simply approving a waiver will mean little in the context of the current global vaccine crisis if it gives vaccine producers cold feet about other steps that may be more critical in the short term.

“It is an open question whether this change in position by the U.S. will make it easier or increase pressure on the current vaccine developers to reach more licensing deals, to transfer their technology to more manufacturers,” says Lisa Larrimore Ouellette, a professor of patent law and expert in intellectual property and innovation at Stanford Law School in Palo Alto, California.

“Or it may make them more reluctant to do that.”

That position is prevalent even in India, which along with South Africa first came up with the patent waiver plan.

Mr. Biden’s decision is a welcome turning point, says Achal Prabhala, coordinator of the AccessIBSA project, which campaigns for greater access to medicines in India, Brazil, and South Africa. But beyond a patent waiver, “we need to have actual vaccine technology transferred into an opening licensing system,” he adds.

To date in the pandemic, low-income countries account for only 0.2% of the world’s vaccinations, experts note. Just 14 of Africa’s 54 countries have vaccinated at least 1% of their population, on a continent that produces only around 1% of the vaccines it administers.

All that may be true, IP rights advocates say, but they maintain that nothing about the U.S. shift on a patent waiver will change conditions in developing countries quickly. Even more, some caution only China and Russia would have the capacity in the short term to take advantage of newly accessible IP – two countries Mr. Biden has increasingly characterized as America’s principal rivals in the competition for global political and economic leadership.

Indeed, if some global health activists are applauding Mr. Biden’s support for a patent waiver, it is not so much because it is seen as a quick fix to a vaccine shortage. Rather, it’s because the decision is seen as placing the U.S. – traditionally a staunch supporter of intellectual property rights and private pharmaceutical companies’ patents – in the opposing camp that prioritizes global health as a right and a security issue for a globalized world.

From this perspective, the U.S. interest is served as much by a healthy global population as by other domestic steps it takes. As Ms. Patel says, the good job the U.S. has done with its vaccine rollout will be of little use “if we do not make sure that the whole world is vaccinated.”

For many South African activists who fought a similar battle over IP rights and HIV/AIDS drugs in the 1990s and 2000s, the U.S. support for a patent waiver will serve another useful purpose if it prompts a broader debate and eventually movement on the question of global access to health services.

The world “needs a real reckoning about the impact of intellectual property on access to health-care services and in particular medicines” in the Global South, says Fatima Hassan, director of South Africa’s Health Justice Initiative.

If indeed one of Mr. Biden’s goals with his patent waiver move was to reassert U.S. global leadership, then the president is going to have multiple opportunities soon to demonstrate that, says Mr. Morrison of CSIS.

Noting that “we’re entering a season of intense and high-level political engagement,” with the WHO, the G7 group of advanced economies, and other multilateral bodies coming together in the coming weeks, Mr. Morrison says, “Biden’s going to have ample opportunity to demonstrate global leadership. But the question will be, what comes next?”