Estimates from US Space Force data suggests that re-entry will occur between 2 and 4am UK time – reaching speeds of 4.8 miles per second. Twitter users are beside themselves – posting numerous hilarious gags, as #Chineserocket trends worldwide.

There are varying estimates on where China’s Long March 5B rocket will land, including the Southeastern US, Mexico, Central America, the Caribbean, Peru, Ecuador Colombia, Venezuela, parts of Southern Europe, much of Northern and Central Africa, the Middle East, Southern India and Australia.

One Australian Twitter user waiting for the rocket to touch down wrote: “If #ChineseRocket #LongMarch5B debris lands on us at Mother’s Day lunch, I’m gonna be peeved.”

Another wrote: “Waiter, there’s a #ChineseRocket in my soup.”

One more said: “So, is it too early to put on my ‘I survived the Chinese rocket reentry’ t-shirt?” 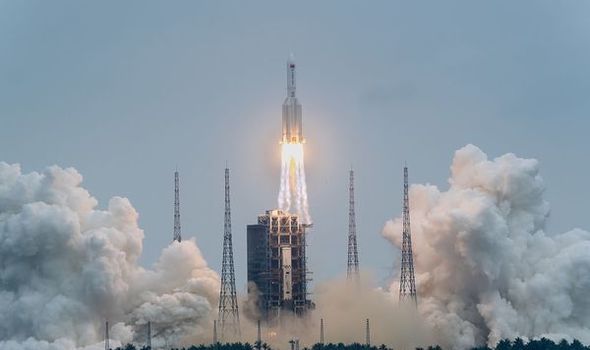 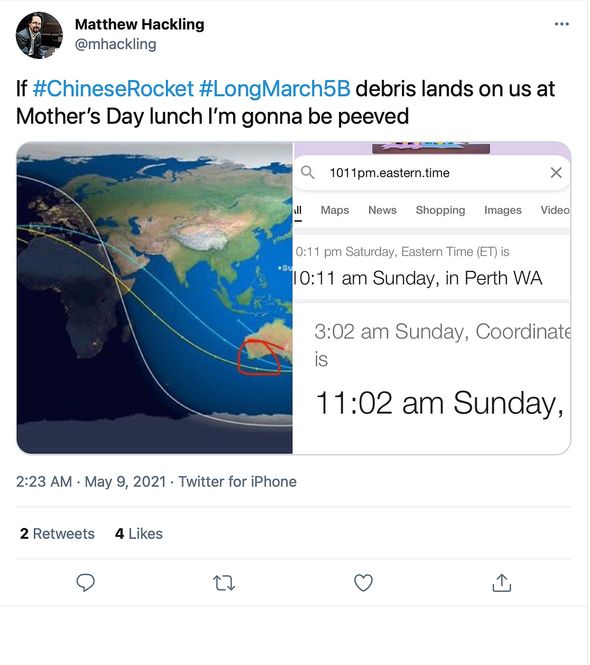 Another American user wrote: “The same night #ChineseRocket is expected to fall, @elonmusk is live on SNL…. Which one should I watch?”

One Twitter user wrote: “Flat-Earthers must be having a hard time watching the live feed of the rocket looping around the planet right now.”

Another said: “Earth in a nutshell: made by China – Destroyed by China.” 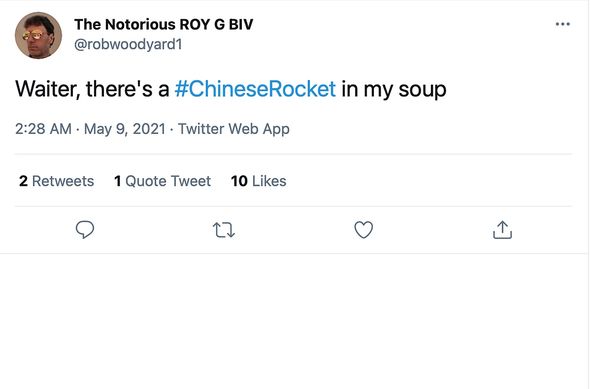 One more posted an image of man looking at his watch with the caption: “Me waiting for the #chineserocket to hit me so I don’t have to go to work on Monday.”

Another user simply posted a 12 hour weather forecast with a rocket ship emoji featured at 4am saying: “The weather’s looking interesting today.”

One more user said: “Why am I tracking the #ChineseRocket like I’m tracking an Amazon order.”

Another person tweeted: “That movie Armageddon came out all the way back in 1998. Why don’t we have a way of blowing up the #ChineseRocket before it crashes onto the planet?”

On Friday, China‘s foreign ministry said that most debris will burn on re-entry and is highly unlikely to cause any harm. 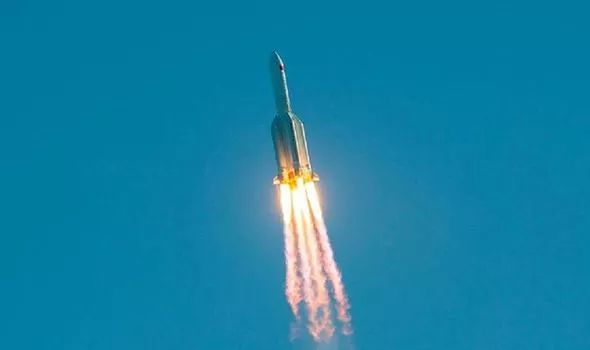 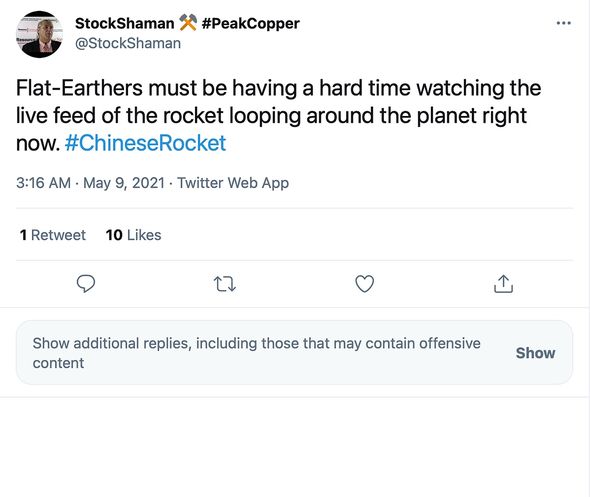 EU Space Surveillance and Tracking said the statistical probability of a ground impact in a populated area is “low”, but noted that the uncontrolled nature of the object made any predictions uncertain.

The Long March 5B was launched on April 29 at the Wenchang Space Launch Center in China.

It’s mission was to carry into orbit a module containing living quarters for a future Chinese space station.

The rocket orbits the Earth roughly once every 90 minutes and at time of writing should be heading towards the Indian ocean moving West to East.