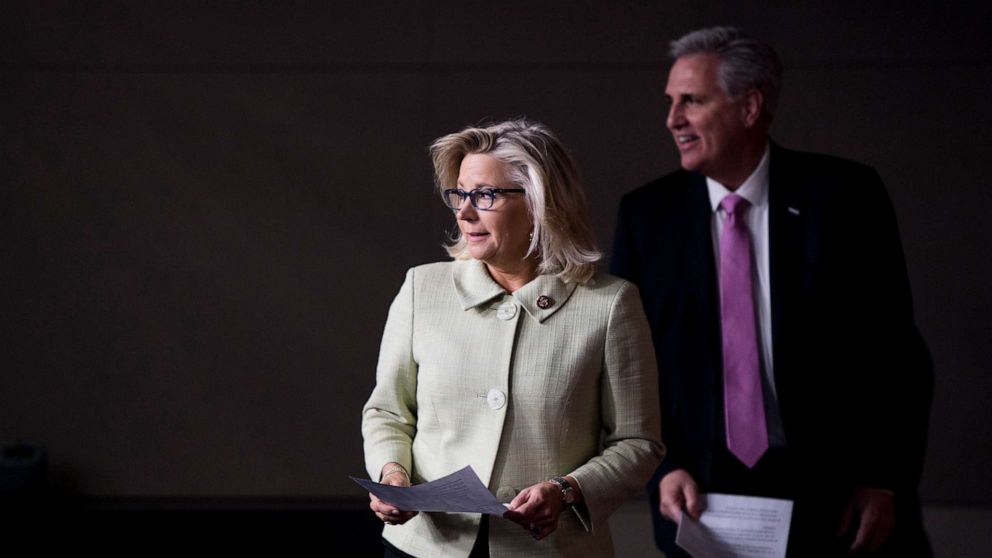 Facebook may have made it easy for itself, as these things go. Wednesday marks judgment day for the platform’s relationship with former President Donald Trump, with the decision on whether he should be reinstated resting with its oversight board.

The Republican Party can’t make up its mind on Trump that cleanly or decisively. That’s making fights the GOP hoped to leave in the past urgent in the present — particularly as it becomes clear that most Republican voters and elected office-holders don’t want Trump gone at all.

Republicans can blame Trump and his refusal to accept the fact of his defeat, on top of his apparent inability to leave a possible fight unfought.

But really, they should be blaming themselves. The trouble Rep. Liz Cheney finds herself in again with her conference is because of decisions her colleagues have made and are making about what constitutes acceptable behavior in a Republican leader while Trump is well out of office and, for him, relatively muted.

It may be that House Minority Leader Kevin McCarthy, R-Calif., essentially sealed Cheney’s fate with his hot-mic take: “I’ve had it with her. You know, I’ve lost confidence.”

McCarthy was central in shielding Cheney, R-Wyo., from removal from leadership after her vote to impeach Trump. But Cheney is simply continuing to say what she has said for months now — that Trump lost and that his actions leading up to and on Jan. 6 constituted a “betrayal” that should not be forgotten.

The stakes for the GOP are about more than who the third-ranking member of House leadership is. It’s about whether Republicans of any stature should be allowed to call out Trump for his lies — or have any opinions about his future role in the party that don’t align with MAGA-world.

All of this brings a new urgency to Facebook’s decision, which will be announced by its independent oversight board at 9 a.m. ET.

Consider the influence Trump is having without Facebook or Twitter, where his ban has been labeled as permanent. The former president has been churning out short statements of late, and now has launched a new website to connect with supporters.

One can only imagine what Trump’s sway inside his party might be like when he starts holding rallies again, and when he uses platforms both old and new to get his message out.

The Biden administration is moving into a new phase of pandemic response as both COVID-19 cases and demand for vaccines dip across the country.

In remarks Tuesday, President Joe Biden aimed to address vaccine hesitancy among Republicans by extending an olive branch of sorts — offering credit to the Trump administration for authorizing the vaccines and gratitude to GOP lawmakers who have spoken up on the efficacy and safety of vaccines.

“Science behind the vaccines has been under development for decades. While we may not always agree on everything, this is one thing people across the political spectrum can agree on,” said Biden. “So I want to thank prominent conservatives like Mitch McConnell and a large group of Republican members of Congress who have — who have medical training, who have advanced getting vaccinated.”

But niceties likely won’t be enough to persuade the hesitant to take the shots. Nearly 1 in 4 Americans are disinclined to get the vaccine and 16% have ruled out getting the vaccine entirely, according to the latest ABC News/Washington Post poll.

According to the same poll, that thinking is highest among rural residents, Republicans, conservatives and those with no more than a high school diploma.

Administering more vaccines will be vital to reaching Biden’s goal of a return to normalcy, or something close to it, by July 4.

As Florida Gov. Ron DeSantis looks ahead to 2024, Democrats at home are setting their sights on his spot in the governor’s mansion.

Democratic Rep. Charlie Crist, a former Republican who was governor from 2007 to 2011, made his run official Tuesday. But another prominent Democrat, Rep. Val Demings, could be preparing to make an announcement of her own.

She tweeted a campaign video hours before Crist’s announcement with the caption “ready for the moment.” She’s even pinned the tweet at the top of her Twitter page. Demings was in the mix as a potential vice president to Biden and has been public about her desire to hold statewide office, either in the Senate or as governor.

“I have received calls and texts and messages from people all over the state, asking me to run because they feel that they are not represented, and their voices are not heard,” she said on MSNBC in April.

Despite trying, Crist hasn’t had statewide success in a decade. Though Florida may be an uphill battle for Democrats, Demings would make history if she won either race — Florida has never had a Black governor or a Black U.S. senator.

FiveThirtyEight’s Politics Podcast. Two Republicans, Susan Wright and Jake Ellzey, were the top vote-getters in Saturday’s jungle primary in Texas’ 6th Congressional District. They will compete in a runoff later this year, precluding a Democratic win in what was expected to be the most competitive special election for the U.S. House of Representatives this year — the crew digs into why Democrats underperformed. They also address concerns that the 2020 census resulted in an undercount of Hispanic Americans — Florida, Texas and Arizona picked up fewer congressional seats than originally expected. And they discuss a recent FiveThirtyEight article that contextualizes the ways that U.S. political institutions, including the Senate, the House and state legislatures, benefit Republicans in both intended and unintended ways. https://53eig.ht/3tginCD