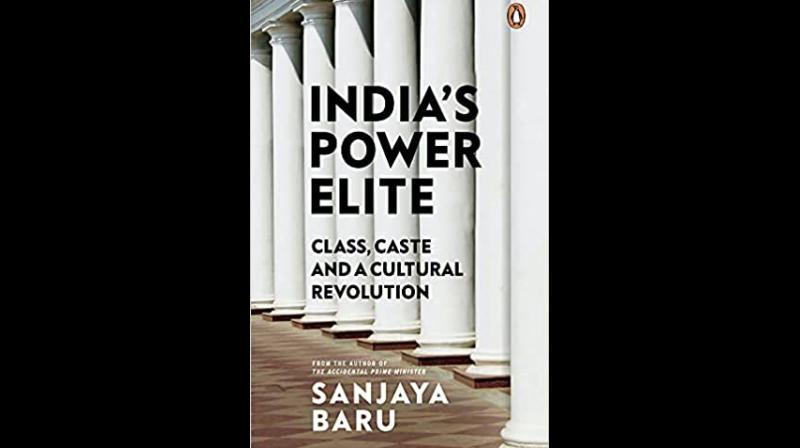 When academician-turned-journalist and former media advisor to former Prime Minister Manmohan Singh wrote without a twinge in his facial muscles about how Prime Minister Narendra Modi has effortlessly dislodged the power elite with its St Stephen’s College-Oxbridge background, many mistook it for a dirge for the defeated lot with good manners and right accents. What was attractive about India’s Power Elite Class, Caste And A Cultural Revolution (Penguin; 2021) was its anecdotal style with a gossipy tinge to it. Baru places himself as an outsider/insider in Delhi’s dress circle and with tongue-firmly-in-cheek pronounces the rather unlamented exit of Delhi’s elite from the corridors of power. And to soothe the wracked nerves of this elite, he compared the Modi invasion to that of decade-long Mao’s macabre bacchanalia Cultural Revolution with frenzied Red Guards chomping and stomping and destroying a whole generation of sensible middle rung communists. He was careful enough to point out that the fanatical Hindu vigilante were relatively less hysterical than the raging Red Guards in terms of intensity and range.

What attracted attention, obviously, was his taking note of the upheaval caused by Mr Modi’s arrival in Delhi as Prime Minister, dealt with much panache in the first two chapters of the book under the attention-grabbing headings of “Bombard The Headquarters” and  “Modi’s Metaphors”. But Baru digs deeper and looks at the changes that have come about among the elites — there is not a single group calling the shots — across the country and in different spheres. And he follows the example of his acknowledged inspiration for the book, American outlier sociologist C. Wright Mills’ 1956 classic The Power Elite.

That there have emerged new elites from time to time in Independent India is rather an unattractive if factual proposition. What Baru outlines as he goes along is the emergence of new elite groups in different spheres, in politics, in business, in agriculture, in bureaucracy and military. He describes the ascent of Mr Modi as the conquest of the backward castes of an upper caste-based Rashtriya Swayamsevak Sangh (RSS) and the Bharatiya Janata Party (BJP). This will remain a debatable thesis because the OBC revolution in RSS-BJP was carefully engineered and it was the reason behind the emergence of Mr Modi. Baru indirectly raises the moot question whether the success of Mr Modi in national politics is due to the fact that as an OBC representative he wins the approval of the numerical OBC majority in the country. But it remains an untested proposition because this presumes that all the designated OBCs form a single class or that they have shared class interest in the same manner that it is assumed that Hindus form a monolith.

He also narrates the shift in power from the feudal lords, zamindars and landlords to that of the rich peasants, who are mostly from the backward classes, and the rich peasants became the new rural elite. The transmutation continues as the “rural landowning castes who have acquired political power are able to obtain urban land and become super-rich.” And he draws the conclusion, “Every major urban conglomeration across the subcontinent is now fertile ground  for the enrichment of the provincial rich.” The story of the elites in Baru’s telling is a complex process.

The more interesting aspect of Baru’s analysis of the changing elites is that of business interests in the country and their connection to the political elite. He traces the founding of the Federation of Indian Chambers of Commerce and Industry (Ficci) inspired by Mahatma Gandhi as evidence of the alignment of the national bourgeoisie with the political class. He points out the compulsion of the political class, which has to perforce champion the cause of the poor, and it should appear to be distant from business magnates, and shows how Nehru, Indira Gandhi and Mr Modi take an anti-elitist stance.

He argues the case of the Bombay Club, comprising top industrialists, who prepared an economic manifesto of sorts in 1944, advocating a mixed economy with an assigned role for the state in developing economic assets which are later to be transferred to the private sector. And controversially Baru argues that the First and the Second Five Year Plans, and especially the Second, which is attributed to P.C. Mahalanobis, was really a reflection of the ideas of the Bombay Club.

The chapter on “Business and the State” shows once again the change or displacement of old elites with the new. He traces the new business players with close links to the top political leadership, from that of the Tata and Birlas of the 1950s and the 1960s to that of the Ambanis, Nandas and Hindujas of the 1980s. He implies that that the much derided crony capitalism has been a part of modern India from the days before independence.

Baru maintains the neutrality of a social scientist while describing the changes that had happened with the political and economic elites, but he offers for the first time an indirect moral critique of the elite groups when he writes about the policy intellectuals and public intellectuals, the media and the celebrity class. While pointing out that in the time of Nehru and Indira could become part of the power elite “because of their access to the PM”, he cites the example of former Prime Minister Manmohan Singh’s “first introduction to Nehru was made by Singh’s Amritsar neighbour Mulk Raj Anand, a Cambridge scholar who became famous as a novelist…” he marks out the “corrupt” journalist category along with the “professional”.

While dealing with the intellectual and celebrity class, he returns to the theme of how Mr Modi has bypassed the experts and the media, he seems to hold himself back from commenting on the consequences of doing away with intellectual inputs or a watchful media. It is indeed the right thing to do because there are enough number of people lamenting the anti-intellectual stance of the Prime Minister. Baru’s book is a teaser where it seems to offer good gossip but it abandons the temptation and doles out serious stuff in an easy-to-read style. It promises to be the 1991 bestseller, You Will Not Eat Lunch Again In This Town of Julia Phillips, the Hollywood outsider/insider, but settles into a sober social analysis tract.

What restoring an old home can teach you about life

Looking to escape the madness? This idyllic Donegal home is just the ticket

Book Review | Laugh and also ponder what patriarchy might do next