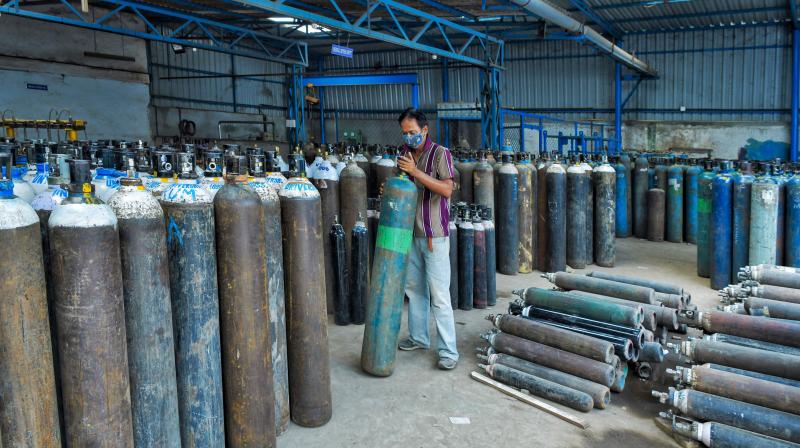 HYDERABAD: The Telangana High Court on Wednesday advised the additional solicitor general representing the Union Government to ensure that the central government supplied 600 metric tonne of oxygen as also enough of the life-saving drugs and vaccines to the Telangana state.

Responding to the state’s complaint that it is not getting the full allocation of 430 metric tonnes (MT) of oxygen due to non-supply of 55 MT of oxygen from a unit at Perambadur of Tamil Nadu, a division bench of the Telangana High Court headed by Chief Justice Hima Kohli advised the Centre to take up the matter with the authorities in Tamil Nadu so as to ensure that there is no hindrances in the supply of oxygen to TS.

If this is not possible, the government is advised to make alternative arrangements from other states, the court said.

The court has examined the data as to how much of the oxygen was supplied to the state since April 25. It found fault with the director of the medical health department for his failure to inform the court as to the extent of demand for oxygen in Telangana now. The court sought details as regards the quantity of oxygen being supplied to private hospitals and government hospitals and what is the shortfall of oxygen.

Director of health has only submitted that there is the necessity of 600 metric tonnes of oxygen in Telangana State, whereas the Union government has allocated only 430 MT (306 MT from other states, 124 MR from Telangana).

The Telangana government told the court that there is a daily requirement for 25,000 vials of remdesivir in Telangana, whereas, an average of 4,300 vials are allotted to the state by the Union government.

Public health director Dr Srinivasa Rao submitted that people from other states are also coming to Hyderabad and other cities in Telangana for treatment due to the best medical facilities available in this state. Some 35 per cent of the patients being treated for Covid in Telangana came from other states, he said and stressed that there is a higher demand for oxygen and life-saving drugs. The Union Government does not allocate the required quantity, he stated.

Public health director Dr Srinivasa Rao submitted that there is no choice before the state government to procure the vaccines directly from the manufacturers. Only 3.03 lakh doses of vaccines have been allotted to the state by the Centre in May so far, and this will be used as the second dose for those above 45 years.

The court expressed its dissatisfaction on the vaccination programme.

Biden White House, under pressure from Democrats, responds on evictions