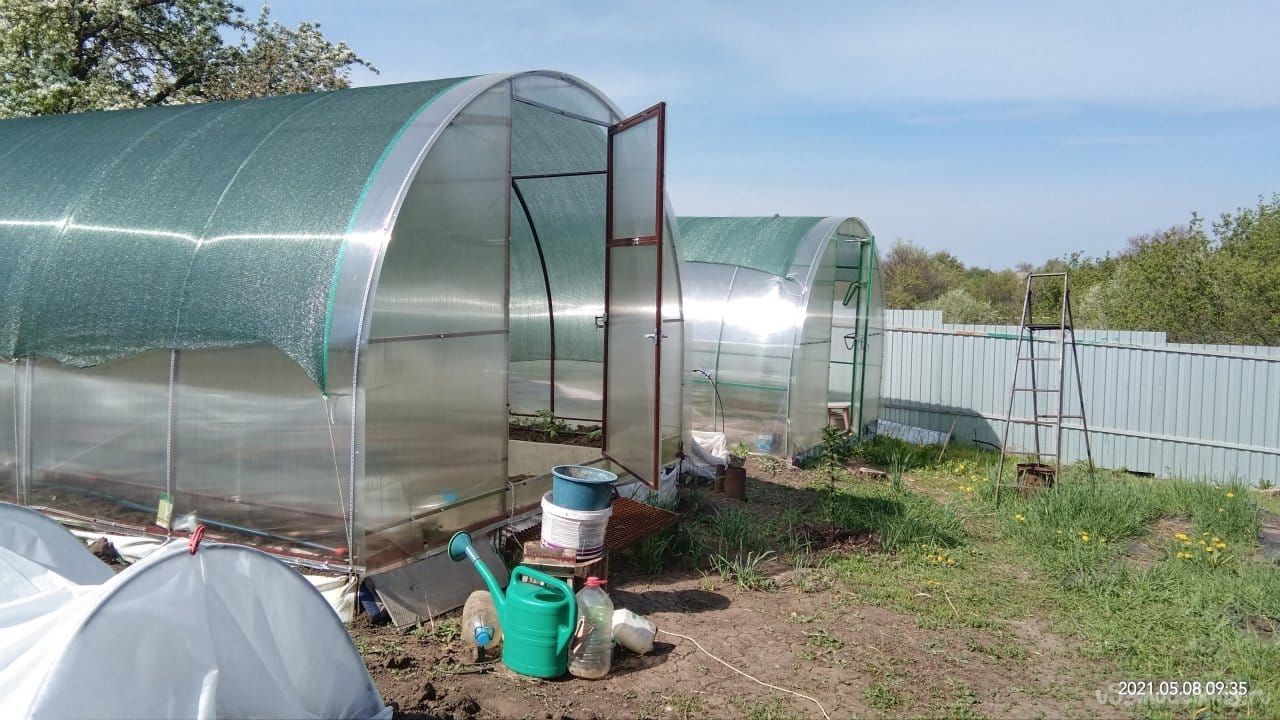 Last year, when the fight against the new coronavirus was just beginning, we were announced non-working paid days. And since it is useless to rest for free, I decided to make myself a greenhouse from a profile pipe and polycarbonate. In winter, my wife and I talked about him: you do not need, where to put, buy ready-made or do it yourself. And then quarantine was declared for almost two weeks.
So, that would save a lot, the task was not. The factory set 3x6x2.1m cost from 18,500 rubles + 3500 rubles shipping. A homemade greenhouse cost 16,000 rubles with delivery (construction stores work remotely, only with delivery) of metal, polycarbonate, hardware, and the like.
It is about the greenhouse that will be discussed, not about the greenhouse! The difference is small, but still there.
Greenhouse – a room for year-round growing of plants with autonomous: heating, lighting, ventilation and irrigation. In which the necessary microclimate for plants is constantly maintained.
Greenhouse – a room for seasonal growing of plants with natural lighting and heating due to the greenhouse effect.
The advantage of a factory greenhouse:
1) Galvanized profile
2) Full set (hardware, handles, latch bolts, etc.)
3) Weight!
Cons
1) Weight!
Weight and advantages, and disadvantages because a lightweight structure can be freely assembled into one person. But the wall thickness of 0.8 mm is not at all happy.
Disadvantages of a homemade greenhouse
1) Rusty iron
2) You need to calculate the amount of material, components and consumables.
3 ) You need to do everything yourself. Bending arcs, drilling, welding, painting, assembling. 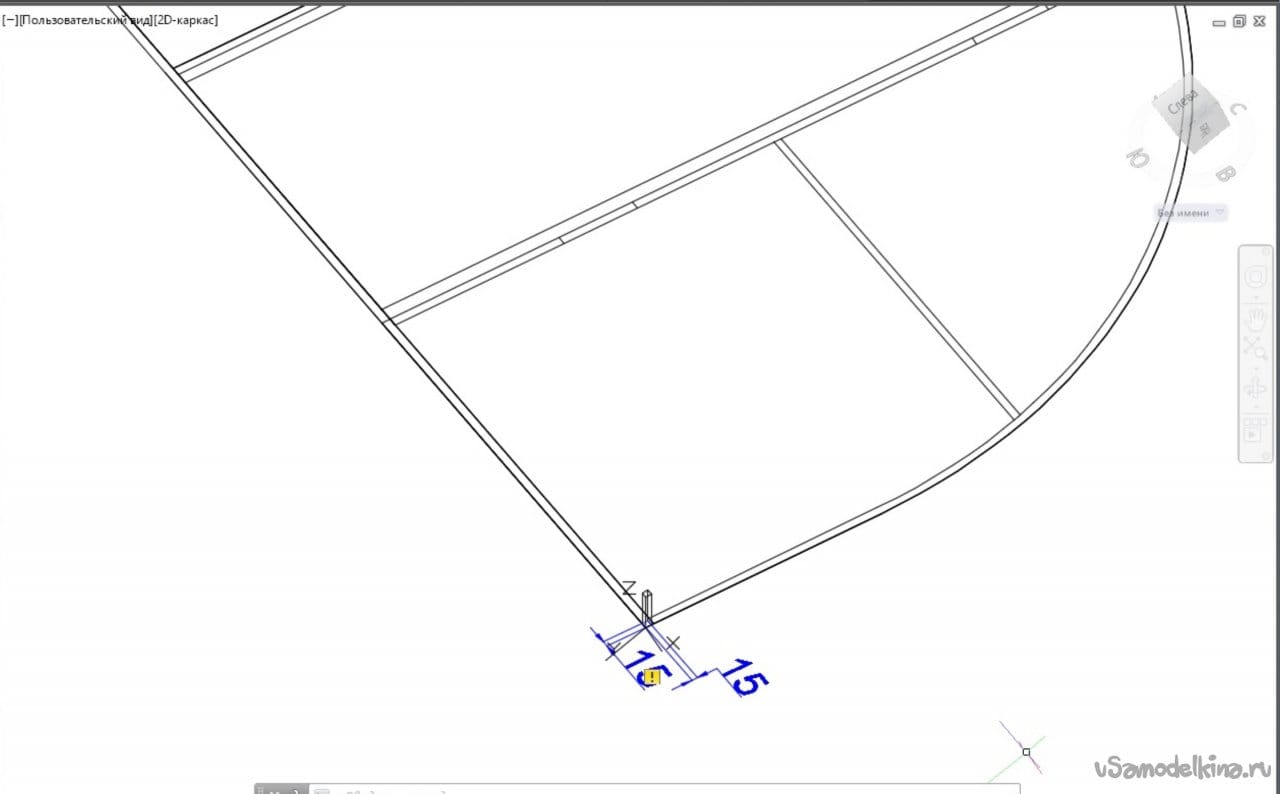 Greenhouse on the side
Everyone knows the formula for the circumference of a circle 2πR, it is needed to calculate arcs. I decided to make the posts of the arc (vertical parts) by 0.6m + 1.5m the radius of the arc at the greenhouse in 3m wide. Total 0.6 + 0.6 + 3.14 * 1.5 = 5.91m. Since I decided to make the distance between the arcs at 65 cm, 10 arcs will be needed for a six-meter greenhouse. Pipes, as a rule, are 6 or 12 m long, six-meter ones were brought. I cut them to fit the calculated length by adding a millimeter (5.92) for the convenience of marking the center.
The profile pipes have a welded seam, the markings were made on the side with the seam and bent the pipe with the seam inward (and at the ends he made sure that the seam did not fall on the front side. the drill on it often breaks and the polycarbonate can be damaged during assembly.
From the edges of the profile pipe, I marked segments of 0.58m (before the start of rounding), then 1.78m and the center (2.96m). I drilled Ø5.5m holes according to the markings and punched them with a connecting rod bolt with a sharpened threaded part. This is necessary so that the screw head hides in the recess and does not break through the polycarbonate during assembly and operation.
Tool for deepening. 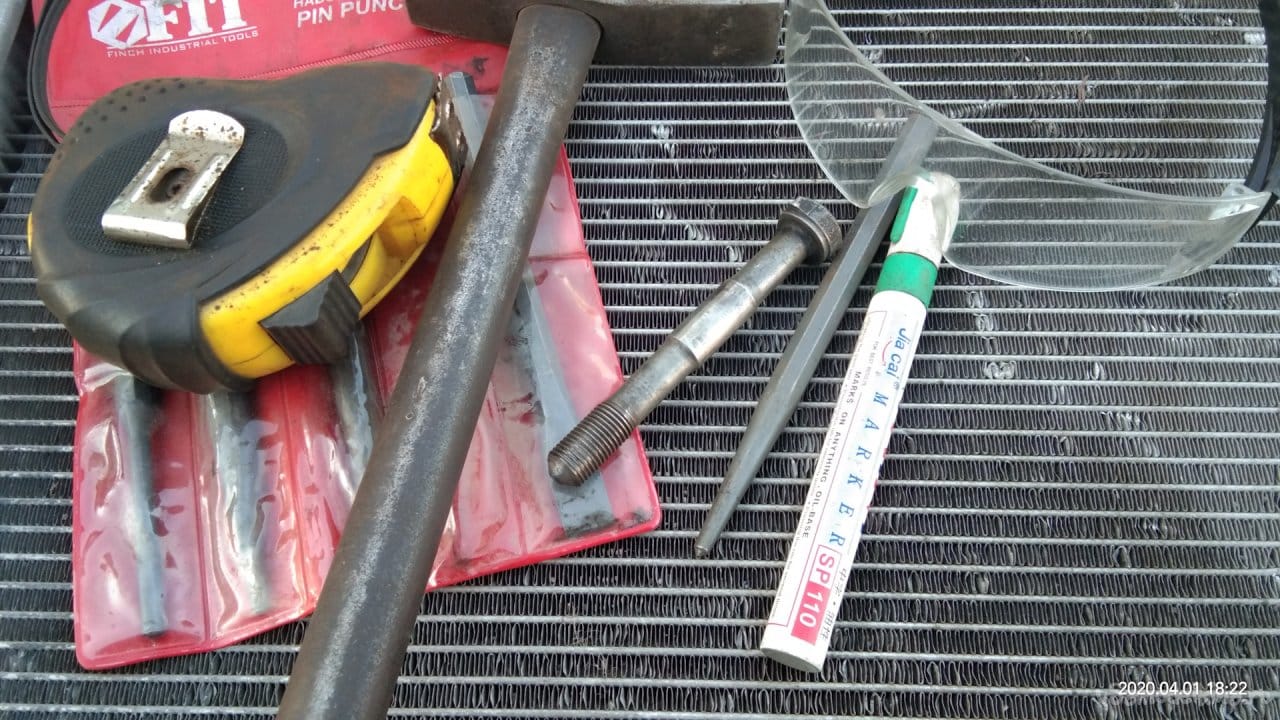 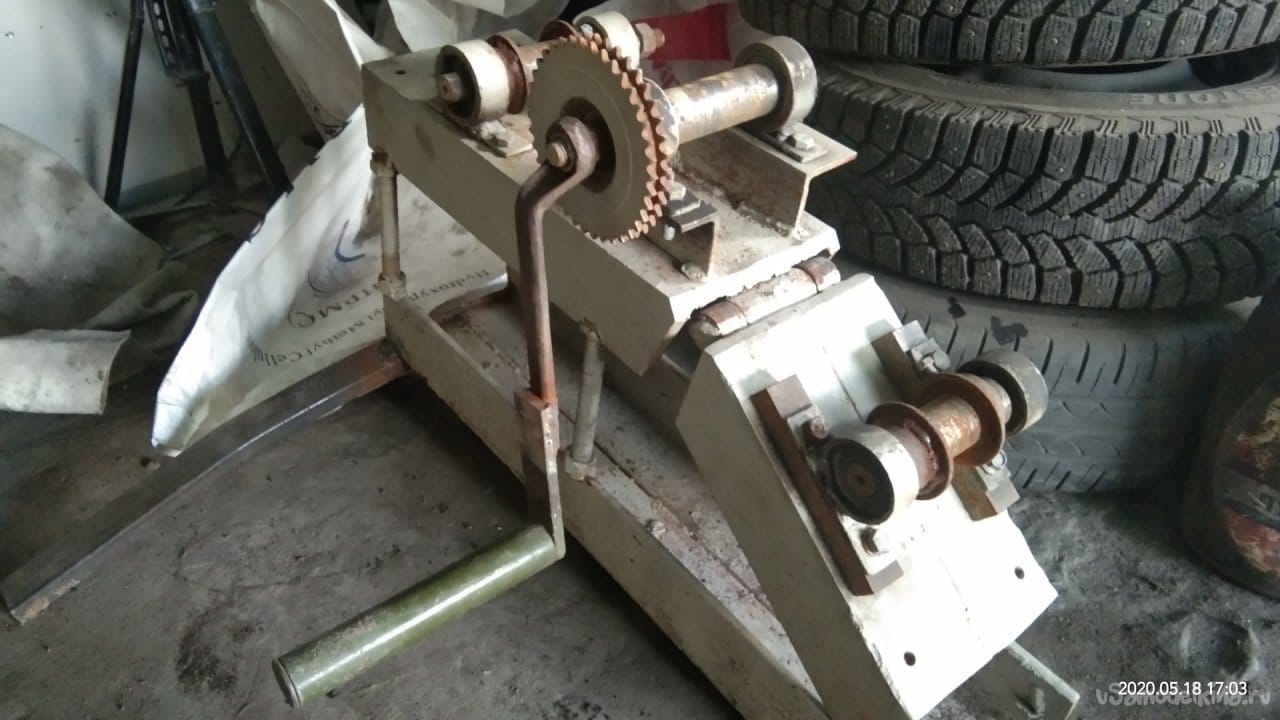 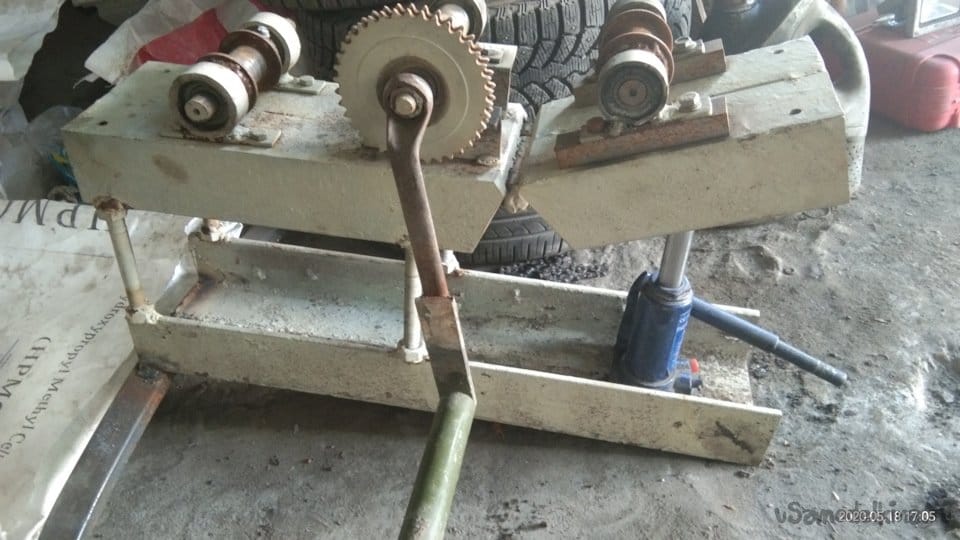 son for about an hour with smoke breaks. 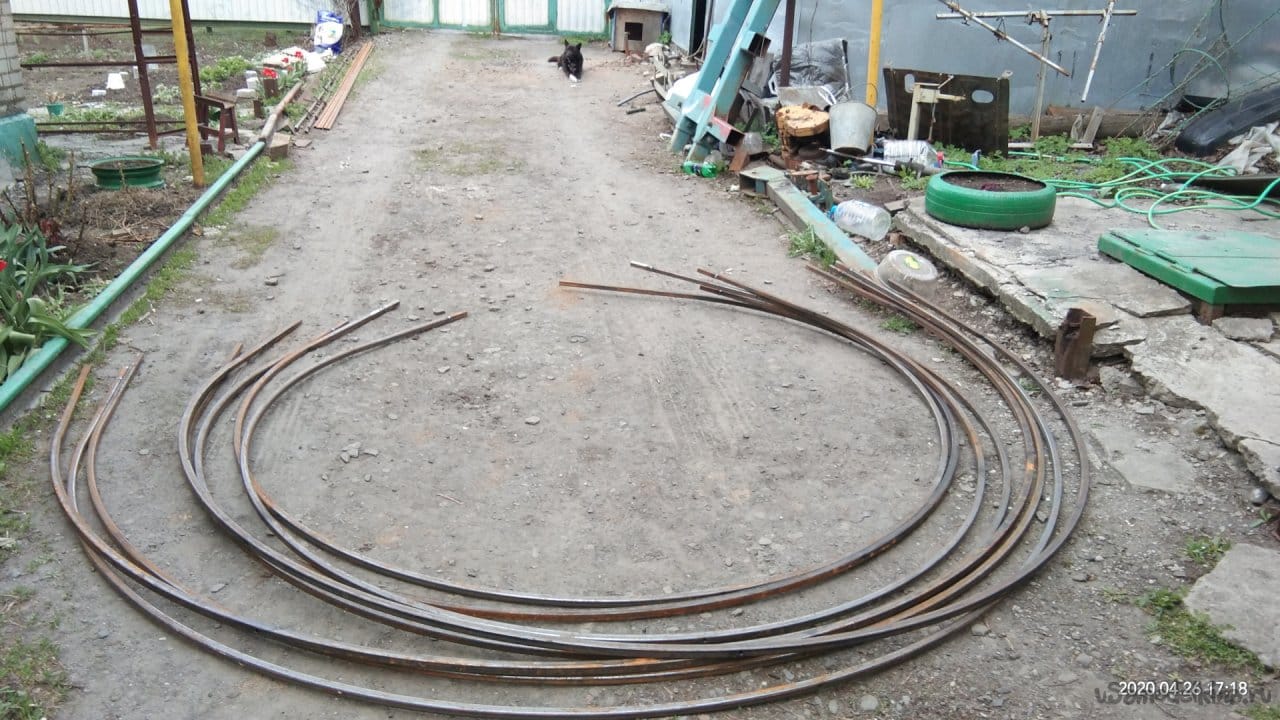 I put a pipe of the same dimension on the base, although preferably rectangular rather than square. The rectangular profile has high rigidity.
To two pipes 20x20x2mm, 596 cm long, I welded 8 ten-centimeter sections of a 15x15x1.5 profile pipe. Departing from the edge and from each other by 65cm, it turned out to be 64cm in the center. Arcs will be put on these segments.
Brackets for fastening the bases to the ground were also welded to the base. These brackets were made from a 20x20x2mm profile pipe. I cut the pipe by 2 cm, drilled an 8.5 mm hole on one of the shelves of the obtained segment. On top of this, I welded an M8 nut. I welded the brackets to the base parallel to the segments for fixing arcs. 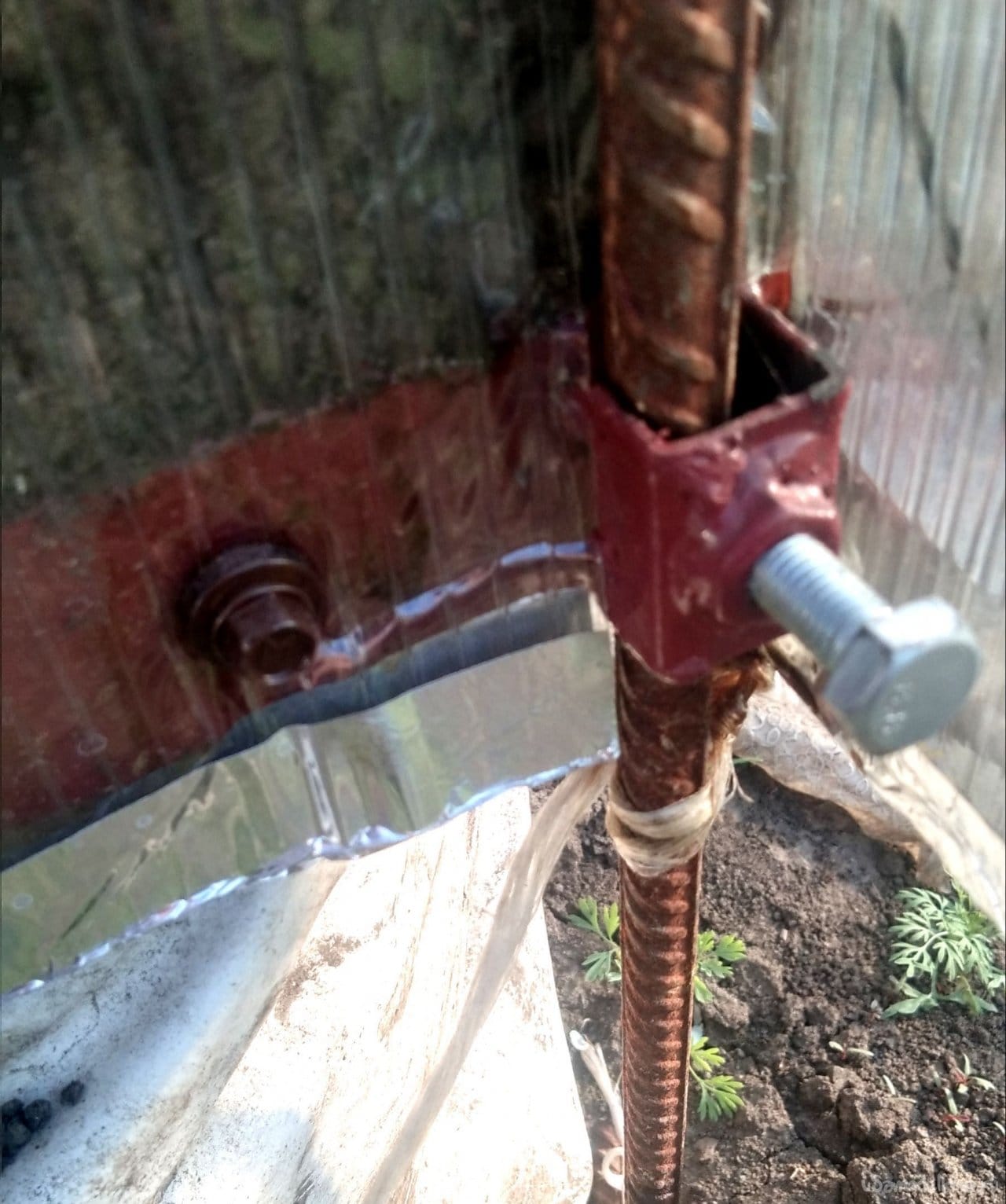 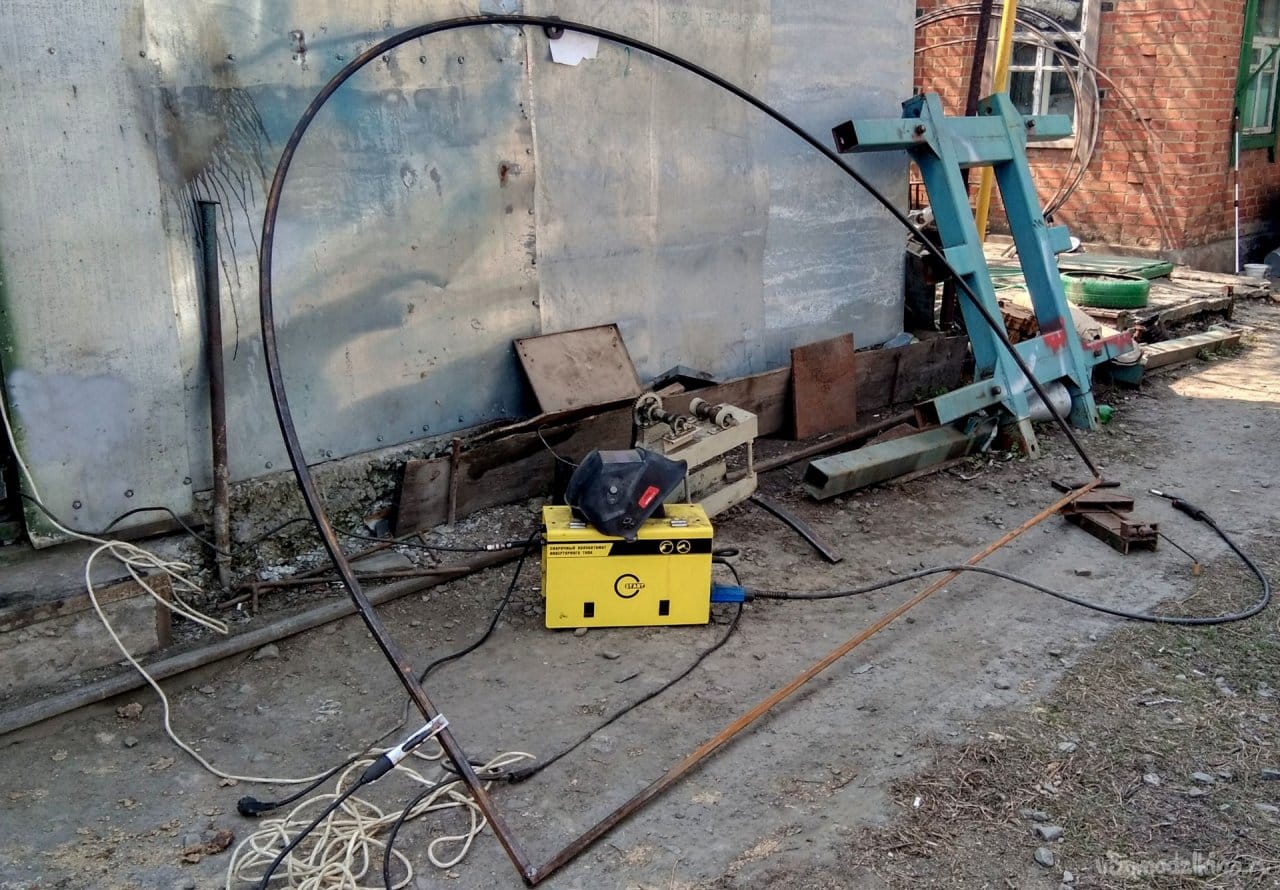 3 brackets were also welded to the end panels, retreating from the corners by half a meter and in the center from the inside. To the corners of the side that goes into the inside of the greenhouse, a connector made of prof. pipes 15x15x1.5mm, length 100mm. The connector and brackets can be seen in the following photo. End sections are placed last! When the greenhouse is already assembled, but not yet covered.
The blanks were painted, and after drying and processed from the inside with a preservative (push.salom). 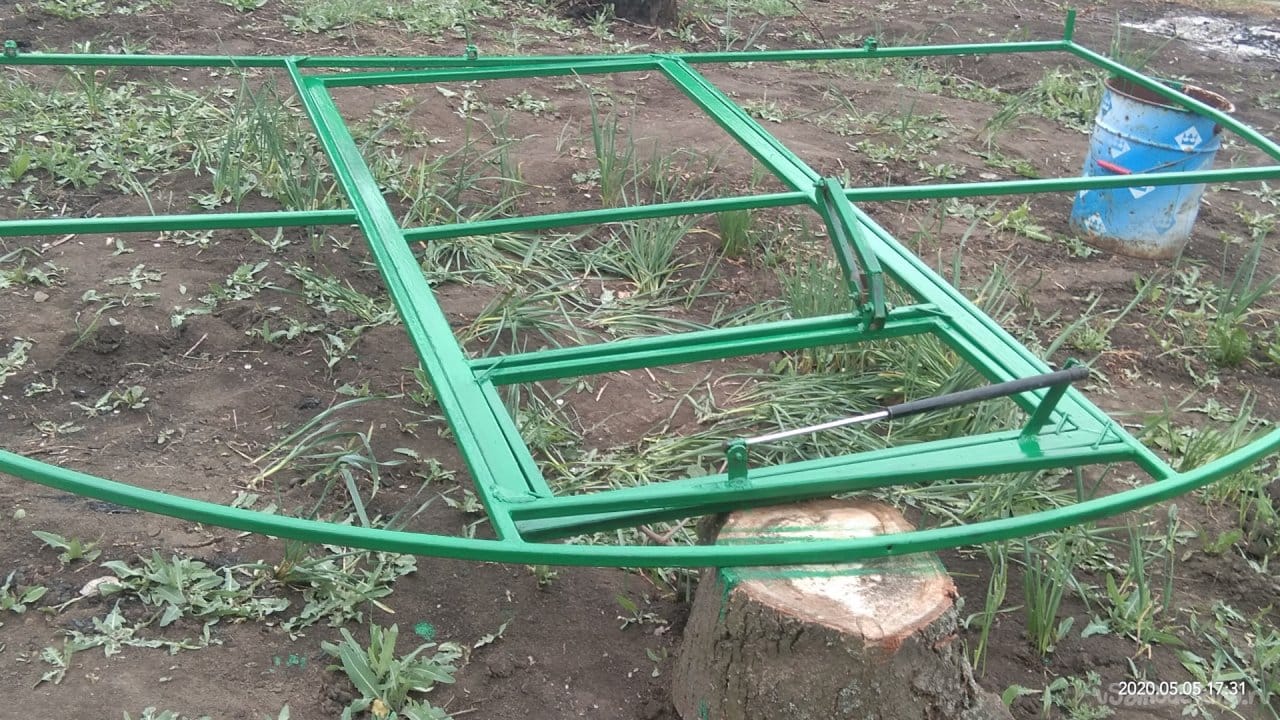 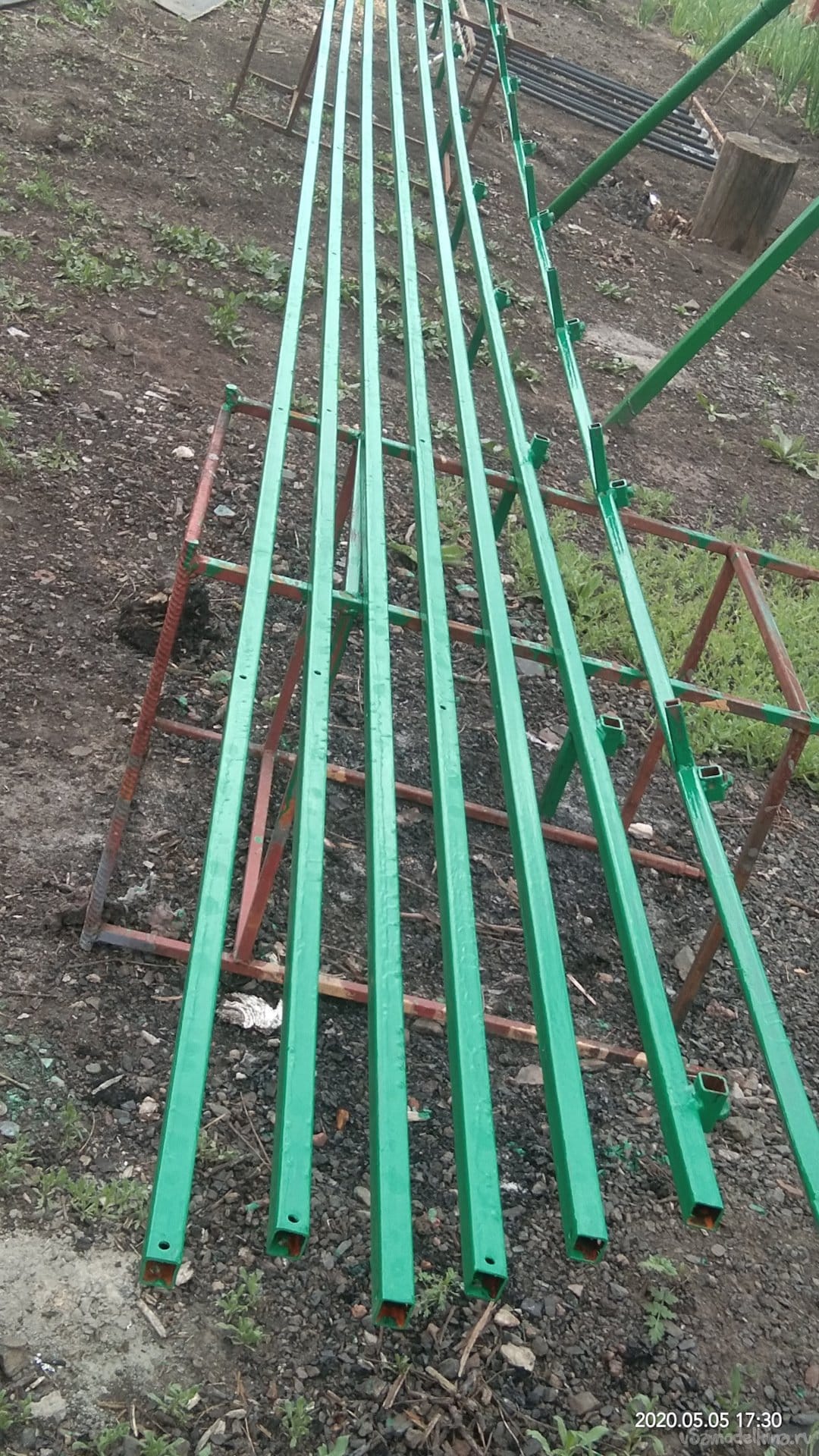 Pay attention to the two right pipes are the base of the greenhouse. It is he who will be aligned with the level during assembly, the other five are veins. Also, a three-meter template was made from some scraps of water pipes. To simulate the end, because the pipe is lighter.
Before assembling the greenhouse, I could not understand why in all the drawings and drawings found on the Internet, the door is a maximum of 80 cm wide (if the end is symmetrical). I decided to make myself 10 cm wider, did it. But I got … A HOLE !!!
There is not enough corner at both ends.
So, the opening can be of any width, but not wider than 80cm, or the opening post (the one that is locked and not under awnings) should be no further than 190cm from the edge. And the width can be made larger, just the opening will be slightly not symmetrical from the center. When cutting polycarbonate, lay the sheet on the end so that the canopies are inside the sheet and the edge of the sheet goes about half the rack.
Since my back (garden) part of the yard goes into the beam, the place for the greenhouse had to be leveled. 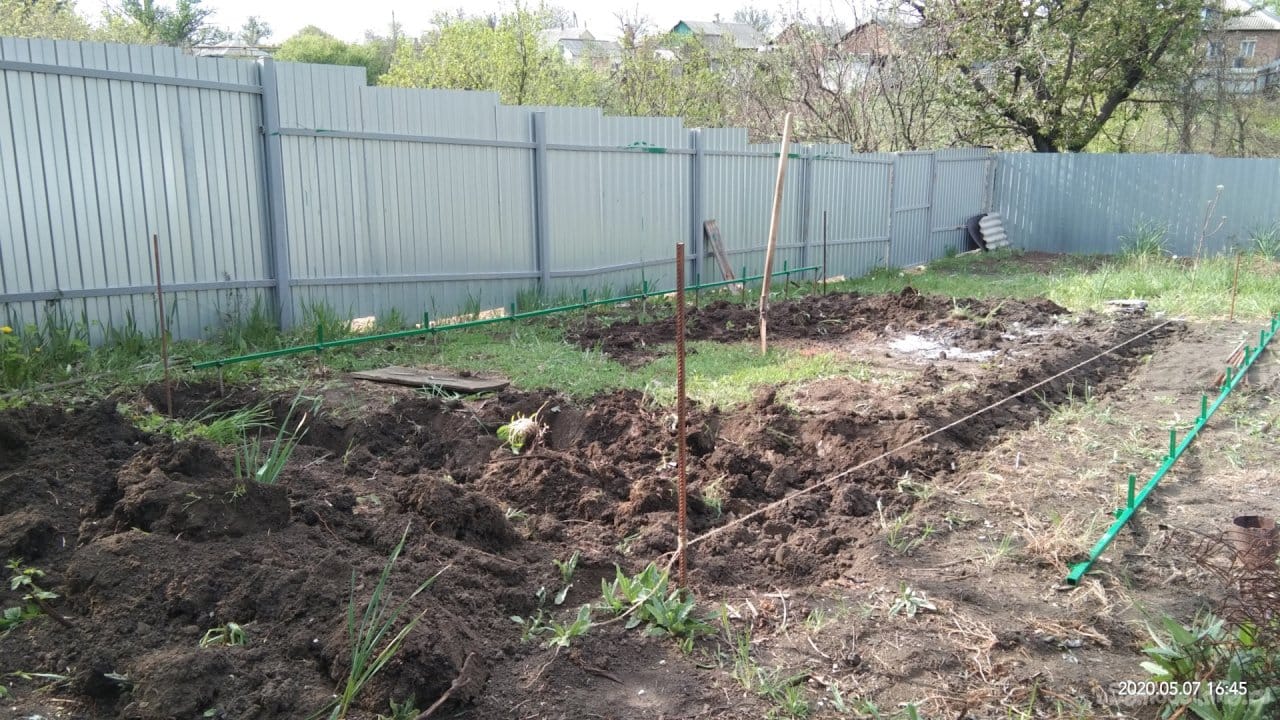 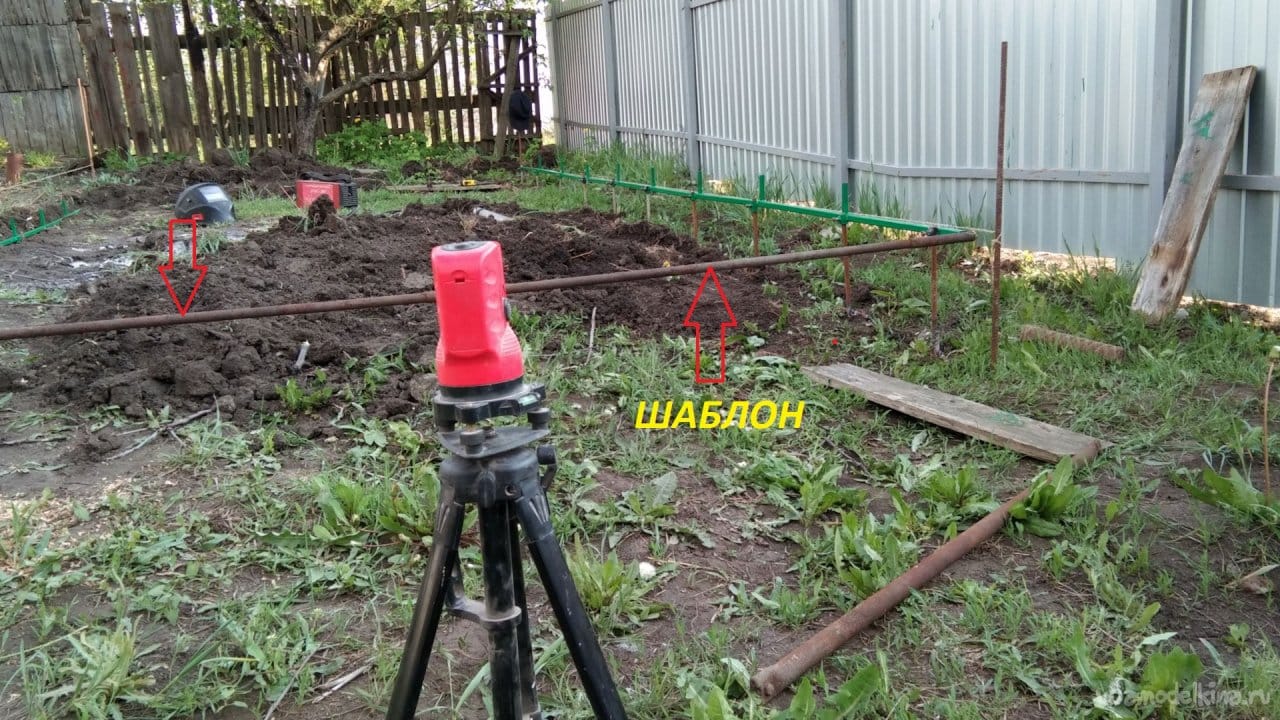 The bases were leveled and diagonally and horizontally
Racks of 16-18mm reinforcement were hammered into the ground about a meter, every 65cm. After leveling the horizon, small (0.3-0.4 m long) crossbars were welded to the reinforcement. They do not allow the greenhouse to sink under its own weight, and keep it from gusts of wind (because after assembling the greenhouse, they were covered with earth and rammed.) 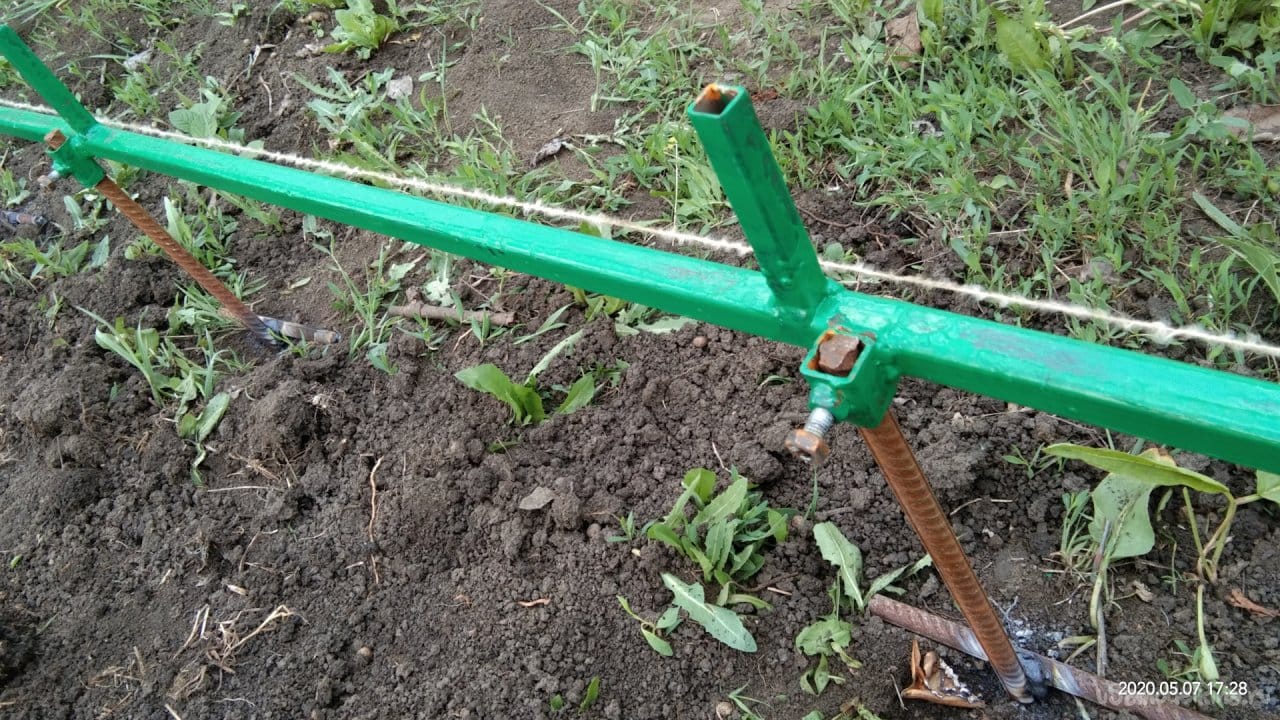 And the assembly itself:
The arcs are put on the connecting pieces and fastened with self-tapping screws, the veins are fastened to the pipes with screws M5. The screw is inserted into the arc, from the inside of the greenhouse, a vein is put on the screw and is nailed with a nut through a washer (a nut inside the greenhouse !!!). The final tightening of the screws is carried out after the complete assembly of the frame. 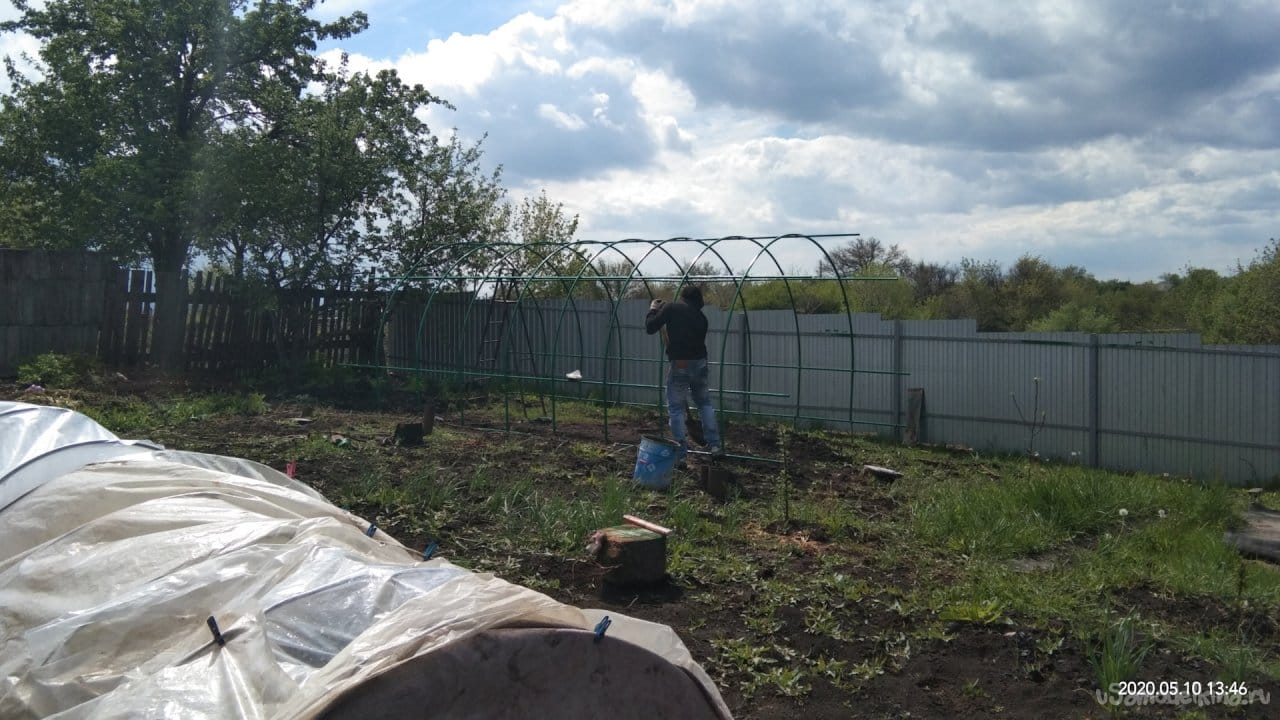 After preliminary assembly of the frame, I took out the end templates and installed the ends instead. 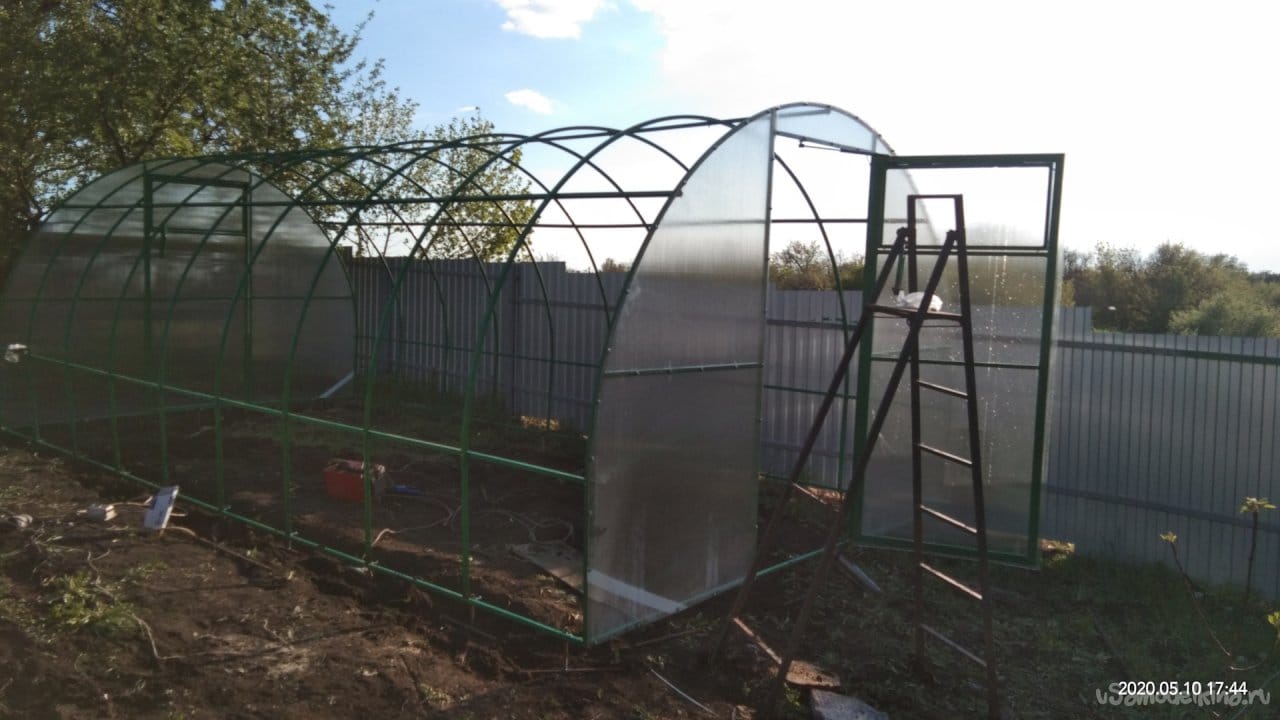 Covered with polycarbonate sheets , the outer sheets should protrude 3-5 centimeters above the end. 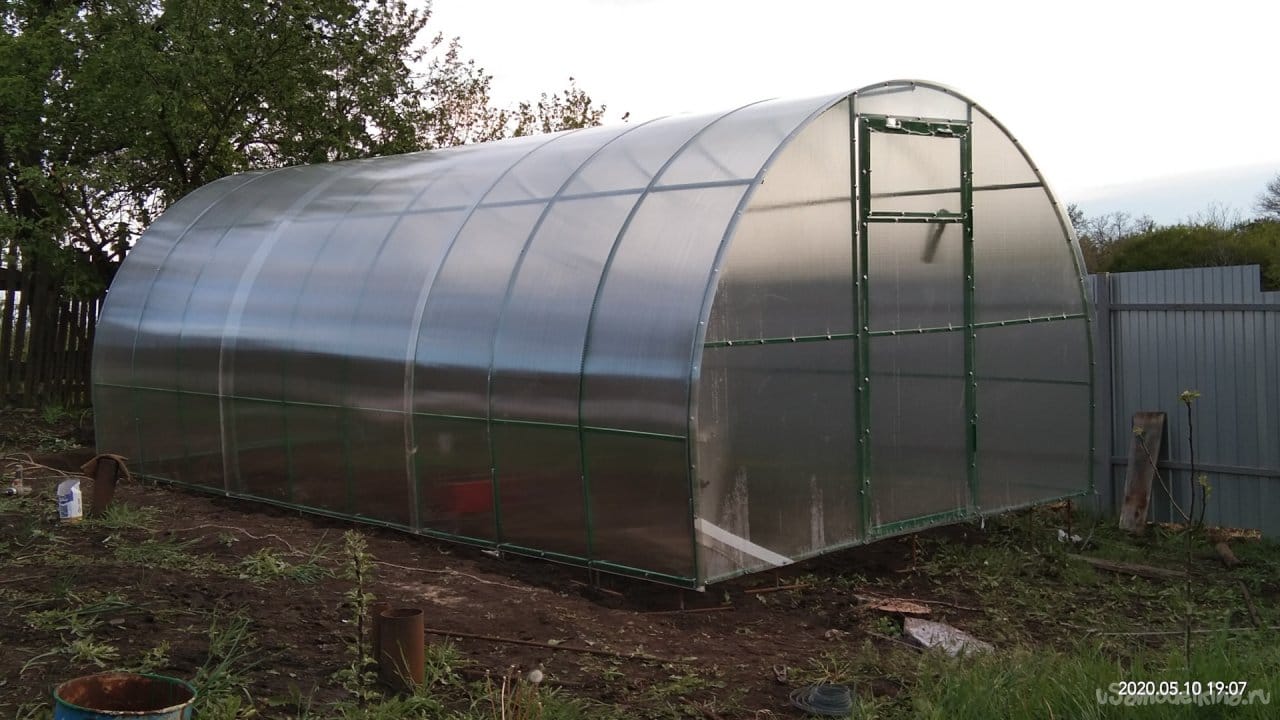 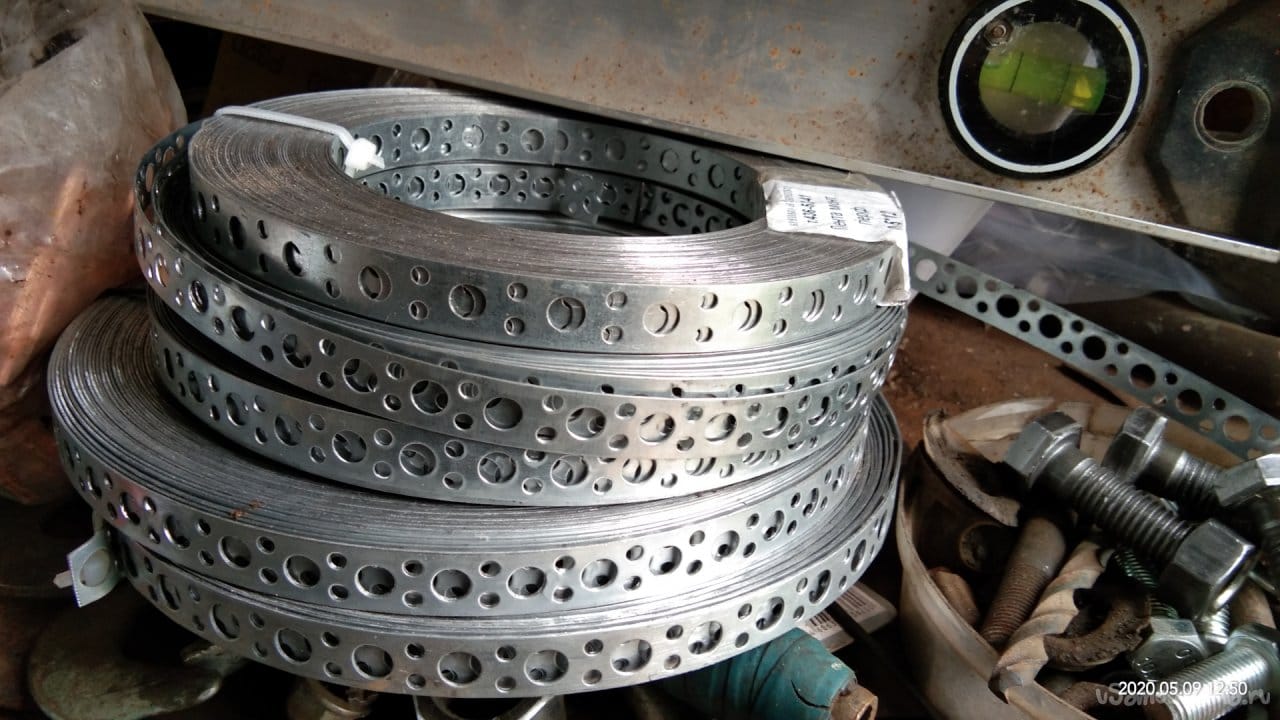 Since the site is under a steep slope, from the inside, I sheathed it in a circle with a strip of the old canopy, so that the earth would not spill out. 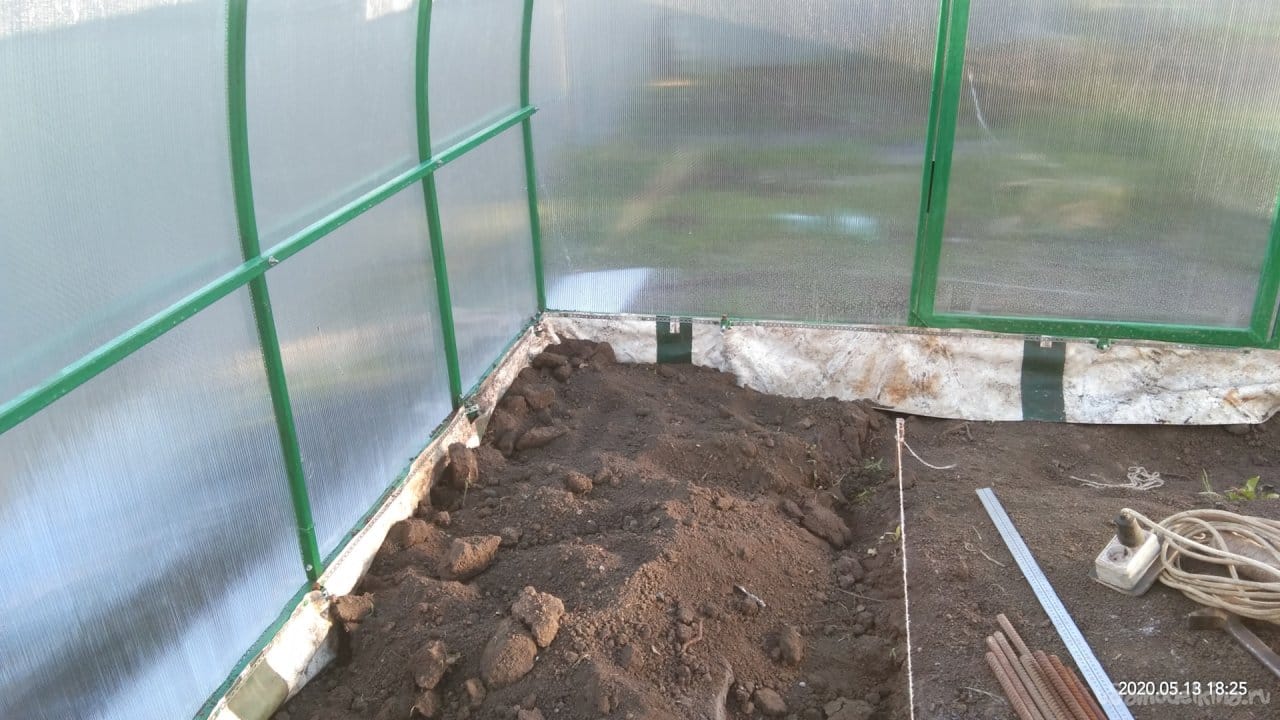 I decided to make a greenhouse “smart”, therefore I collected root watering for 40 bushes from the barrel installed automatic openers on the door. 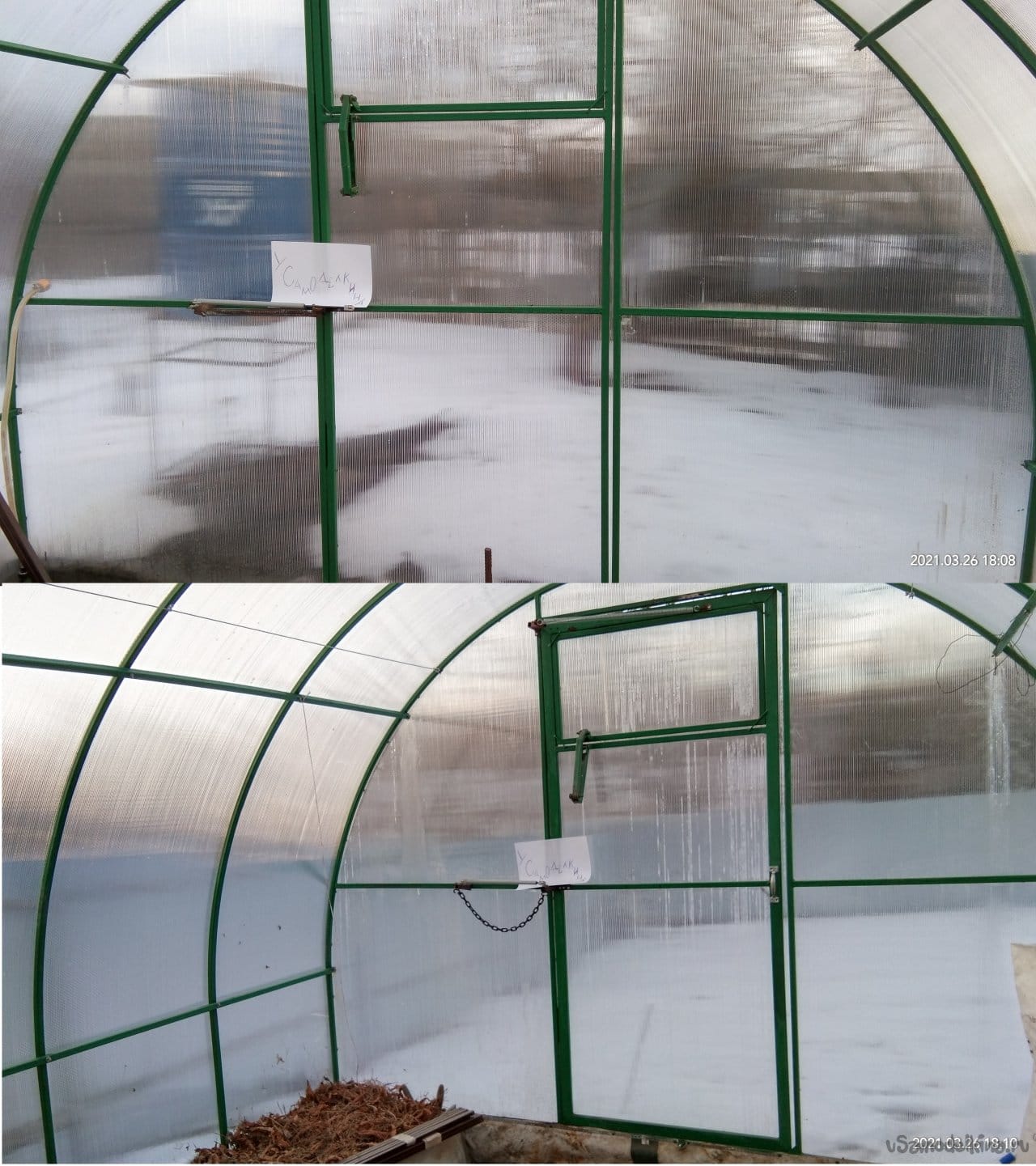 And covered the top with a 55% shading mesh. We are already TYPELENKO!