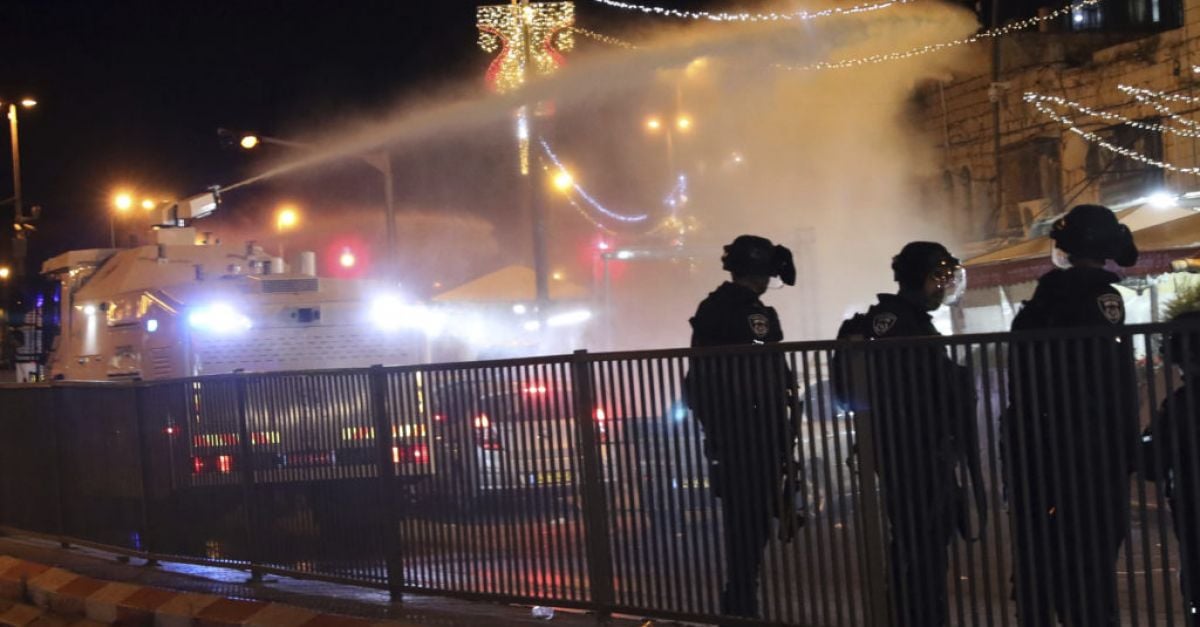 Israel’s national police chief has said he is strengthening forces in Jerusalem ahead of expected disturbances in the coming days following a night of heavy clashes between Palestinians and Israeli police in the holy city.

Palestinian medics said more than 200 Palestinians were injured in the Friday night clashes at the Al-Aqsa mosque compound and elsewhere in Jerusalem.

The violence drew condemnations from Israel’s Arab allies, and calls for calm from the US and Europe.

Israel has been dealing with the heaviest unrest in Jerusalem in several years, with near-nightly clashes between Israeli police and Palestinian protesters throughout the current Muslim holy month of Ramadan.

The protests broke out at the beginning of Ramadan three weeks ago when Israel restricted gatherings at a popular meeting spot outside Jerusalem’s Old City.

Israel removed the restrictions, briefly calming the situation, but protests have reignited in recent days over the threatened eviction of dozens of Palestinians from their homes in east Jerusalem, which is claimed by both sides in their decades-old conflict.

Other recent developments, including the cancellation of Palestinian elections and the election to Israel’s parliament of a far-right Jewish nationalist party, also have added to the tense atmosphere.

It was unclear what set off the violence at Al-Aqsa, which erupted when Israeli police in riot gear deployed in large numbers as thousands of Muslim worshippers were holding evening prayers at the sprawling hilltop esplanade.

Throughout the night, large groups of protesters could be seen hurling rocks as Israeli police fired rubber bullets and stun grenades.

At one point, the police entered one of the buildings in the complex, which includes the Al-Aqsa mosque and the iconic golden Dome of the Rock.

The Palestinian Red Crescent emergency service said 88 of the wounded were taken to hospital.

The Palestinian health ministry said 83 people were wounded by rubber-coated bullets, including three who were shot in the eye, two with serious head injuries and two who suffered broken jaws.

Israeli police said protesters hurled stones, fireworks and other objects at them, wounding 17 officers, half of whom were taken to hospital.

The Al-Aqsa mosque compound is the third holiest site in Islam.

It is also the holiest site for Jews, who refer to it as the Temple Mount because it was the location of the biblical temples.

It has long been a flashpoint in the Israeli-Palestinian conflict and was the epicentre of the 2000 Palestinian intifada, or uprising.

Saturday night is “Laylat al-Qadr” or the “Night of Destiny”, the most sacred in the Muslim holy month of Ramadan. Thousands of worshippers were expected to gather for intense night-time prayers at Al-Aqsa.

Israeli police commissioner Yaakov Shabtai said he had ordered reinforcements ahead of Laylat al-Qadr, saying “the right to demonstrate will be respected but public disturbances will be met with force and zero tolerance. I call on everyone to act responsibly and with restraint”.

Police could be seen stopping more than a dozen buses that appeared to be filled with Arab citizens on a highway leading to Jerusalem. Footage circulating online showed the passengers disembarking, protesting and blocking traffic going the other way. Several hours later, the road was reopened, Israeli media said.

In recent days, protests have grown over Israel’s threatened eviction in Sheikh Jarrah in east Jerusalem of dozens of Palestinians embroiled in a long legal battle with Israeli settlers trying to acquire property in the neighbourhood.

The United States said it was “deeply concerned” about both the violence and the threatened evictions, and was in contact with leaders on both sides to try and de-escalate tensions.

“It is critical to avoid steps that exacerbate tensions or take us farther away from peace,” the US state department said.

The European Union also urged calm and expressed concern about the potential evictions, saying they are “illegal under international humanitarian law and only serve to fuel tensions on the ground”.