At least 3000 protesters took part in demonstrations against the ‘s failure to ensure citizens of the bloc are employed and out of poverty. Over Friday and Saturday, protesters took to the streets of the Portuguese city, where EU leaders had gathered for a summit. Laid-off oil worker Telmo Silva, one of the protesters, said: “If they have social concerns, it’s not a summit that’s needed, but concrete actions on the ground.

“We know companies have no social concerns.”

The 36-year-old accuses Galp, the company that employed him for 15 years, of “using the energy transition to eliminate jobs, cut salaries and scrap benefits.”

He was one of 150 employees who lost their jobs when a major refinery in Portugal closed down.

Instead, protesters said they were disappointed by Brussels’ inability to keep its promises. 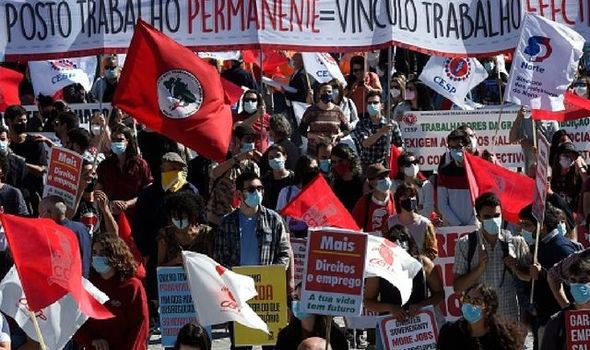 Isabel Camarinha, secretary-general of the General Confederation of Portuguese Workers, CGTP, which organised Saturday’s protest, said: “The workers feel the necessary answers have not been given.

“We have to fight against this policy of low salaries, poverty and the deteriorating public services.”

The leader of the Left Bloc, who joined the protest after a counter-summit with other leaders of the anti-Liberal European left, added: “This European summit is a disappointment; it has resulted in a series of good intentions and not a single concrete measure.”

EU heads of state and government met in the Portuguese city on Friday to discuss the bloc’s social affairs strategy for the next decade.

EU Commission President said: “The (pandemic) recovery is still in an early stage. 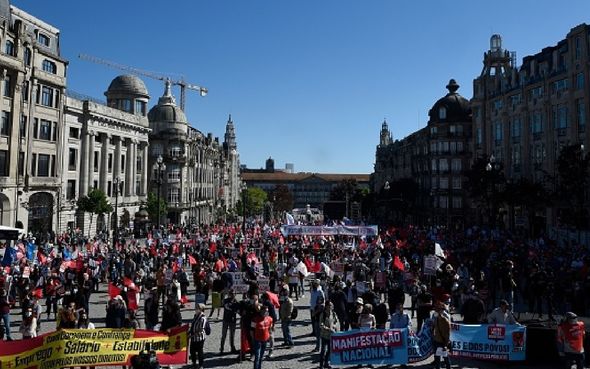 “This very important social summit comes at the absolutely right time, we’ve been through a very tough year.”

She added social challenges including work, training and fighting poverty need to be an “absolute priority” and show that “Europe can deliver”.

On the first day of the summit, EU leaders discussed US President Joe Biden’s proposal for a waiver on intellectual property protections for COVID-19 vaccines.

But five European Union countries distanced themselves on from the US leader’s idea.

Experts said waivers could take years to negotiate, and would not address the immediate need to manufacture more doses fast.

French President Emmanuel Macron said on entering the talks: “What is the current issue? It is not really about intellectual property.

“Can you give intellectual property to laboratories that do not know how to produce and will not produce tomorrow?”

“The main issue for solidarity is the distribution of doses.”

He added France was working hand in hand with Germany on the issue.

Berlin expressed its opposition to the idea on Thursday.

President Biden on Wednesday backed a call from India and South Africa to waive patent protection for COVID-19 vaccines, responding to pressure from Democratic lawmakers and more than 100 other countries, but angering pharmaceutical companies.

Some EU officials argue that it could take two years to agree on the waivers in the World Trade Organisation (WTO), most likely making it irrelevant to the current pandemic.

Indonesian military says submarine missing with 53 on board