I had to be present at the sad event. I saw with my own eyes how the aircraft modeling circle was killed. Which was led by the Master of Sports. I called and offered to pick up a couple of portable safes with models, it was a pity to throw them away.
The funding was cut off, not the Olympic “direction.” Karate players, boxers or maybe, God forbid, football players?
Okay, distracted. What I see.
A couple of solid plywood boxes for transporting models. They contain a bunch of gliders almost intact.
I spread all this wealth on the tables.
Nostalgia ..
They don't build so well now from wood. 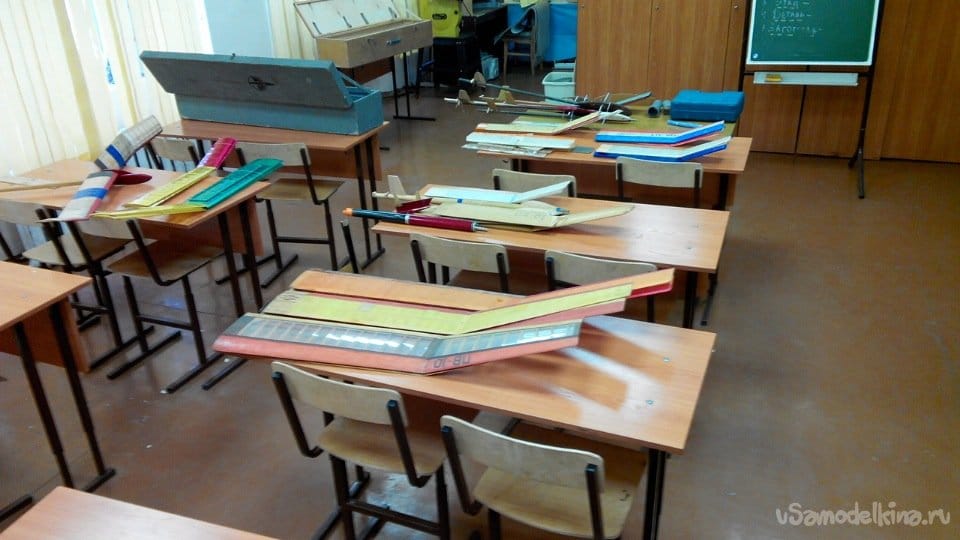 With words of gratitude, dragged to car.
After that there was a strong desire to restore the glider class F1A.
I chose a couple of the most survived.
So what is there.
A real timer wick. 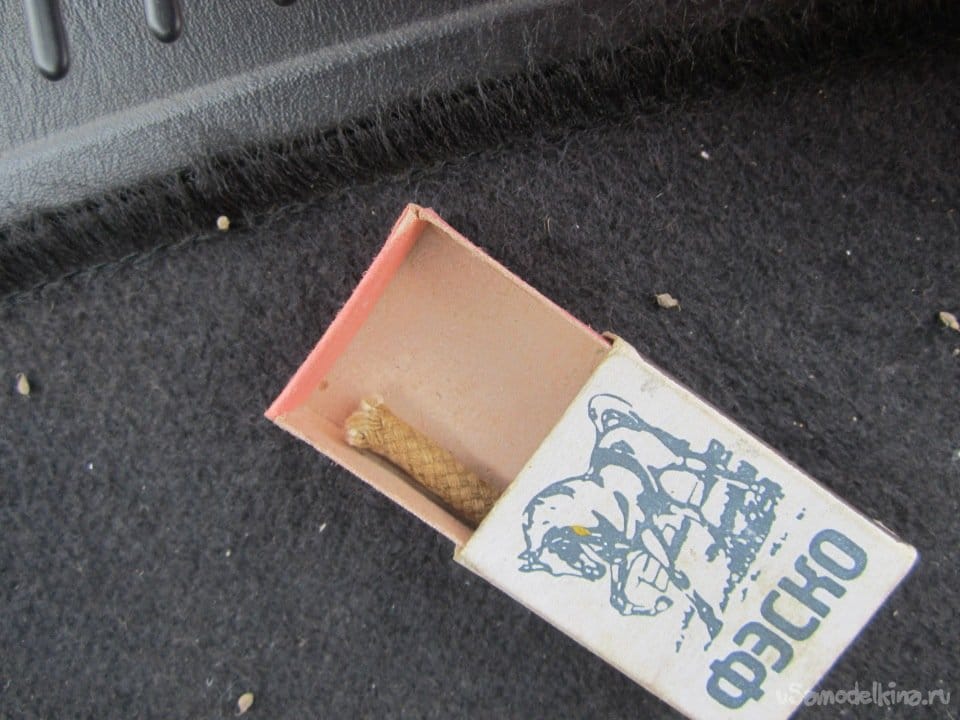 Fuselages.
One with a wooden tail boom, the other with fiberglass. 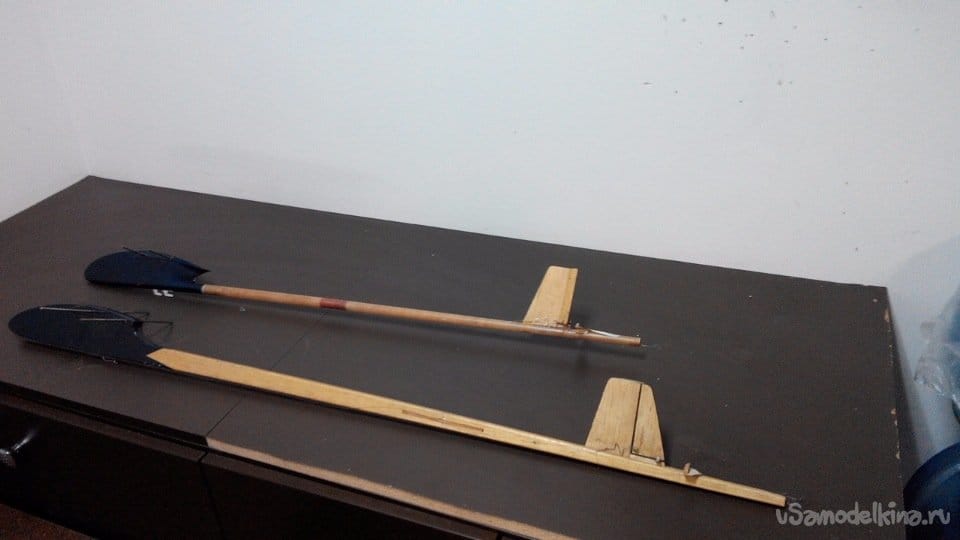 Rudders are made of balsa, almost intact .
Adjustment elements too.
I explain – at the start, the halyard pulls the starting hook and the control line sets the rudder in a straight line. 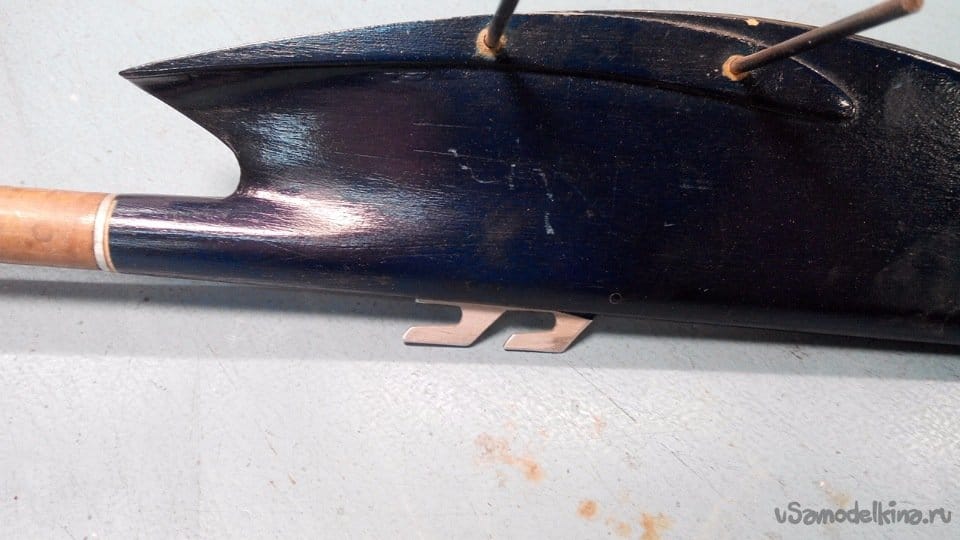 When the model is tightened high enough , the halyard with the help of a flag from a cloth jumps off the hook, freeing the fishing line and the rudder is turned by a pull-back spring. The model starts to turn. 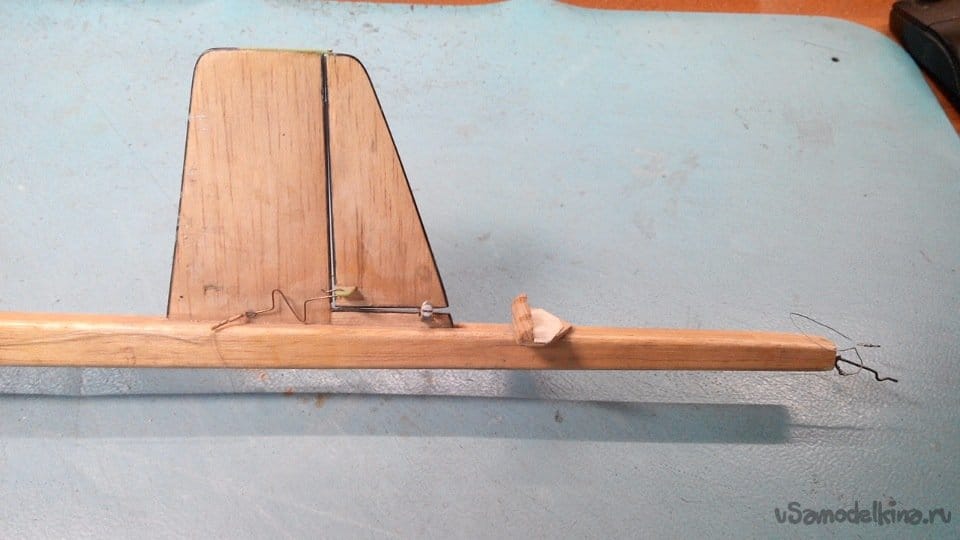 To prevent the model from accidentally flying away in an upward flow, the elevator is attached to the stoppers with a thread. After two minutes of flight, the wick burns through the thread and the elevator rises vertically at an angle of 45 degrees and the glider falls into parachuting.
Such is the simple mechanics.
There is a crack on the wooden fuselage, already repaired.
I spread epoxy, glue the crack , then wrap the damaged area with thin fiberglass. On top of the film and fix everything with masking tape.
I figured out the beam, all the other elements are strong enough without damage.
The second fuselage made of a thin fiberglass tube is completely out of order. Unfortunately, I do not have such a mandrel to make a beam. I dug in the bins, found a suitable carbon tube.
With the remaining epoxy I glued a new beam into the fuselage and installed all the elements on the tail. 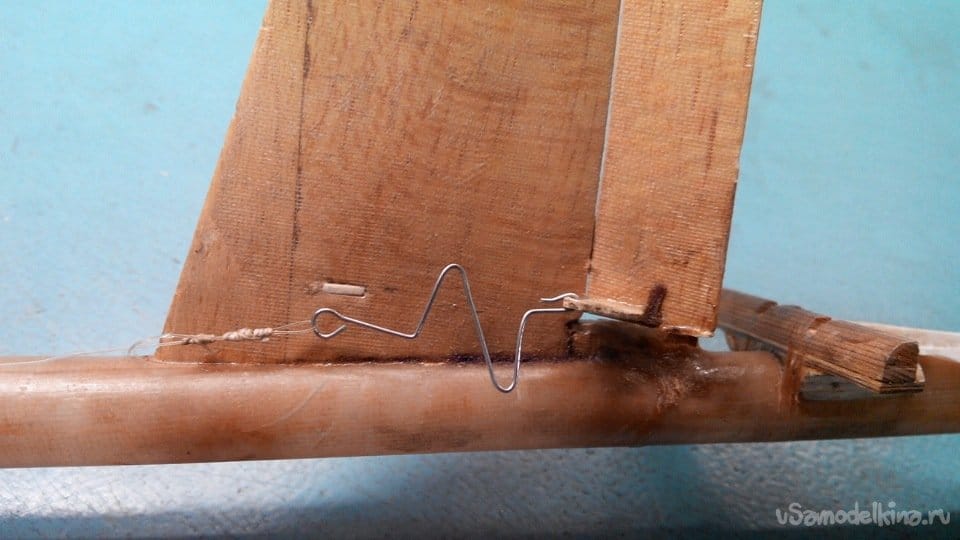 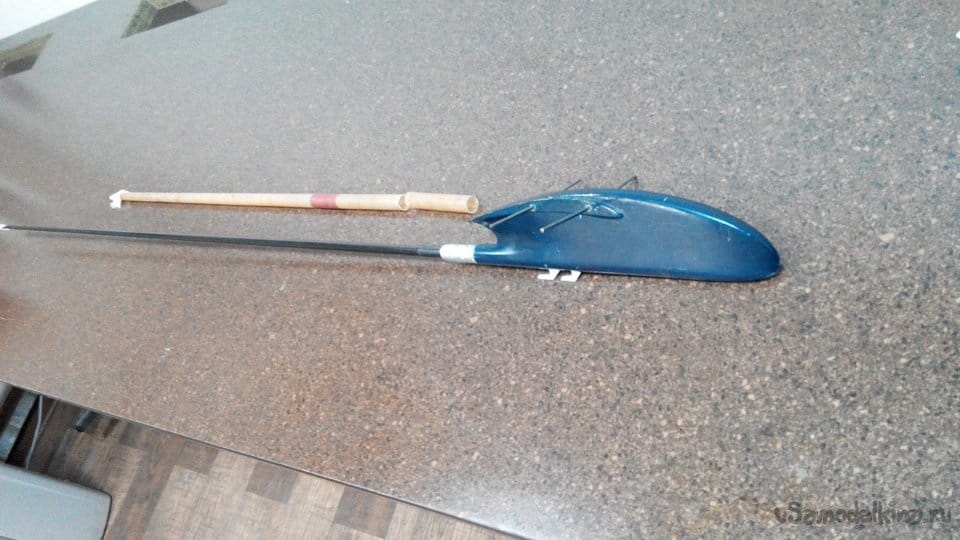 With elevators everything is much worse. 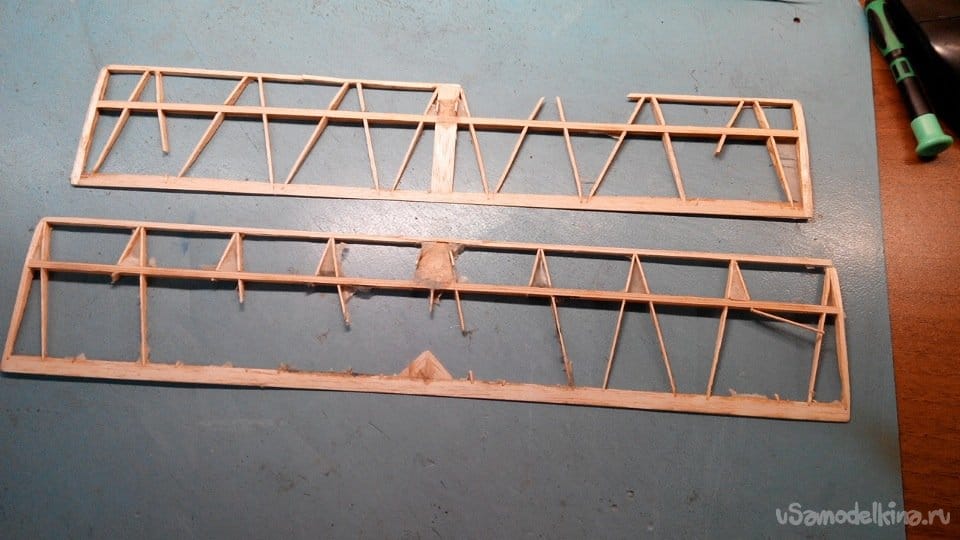 Restored one of the elevators. Fitted … well, it turned out to be painfully bulky.
No need to completely redo.
They fall apart in the hands.
The weight of the structure is about 9 g. I need to make it much easier, because I decided to cover the models with film. It is heavier than mica paper with enamel.
I am making a copy from the elevator ribs. Small, thin. I have never made such an elegant design.
Made a template from thin aluminum. I fasten it on the balsa plate with needles and a scalpel, carefully, cutting out the ribs one by one.
Putting together the first structure.
Heavy damn, needs to be redone. 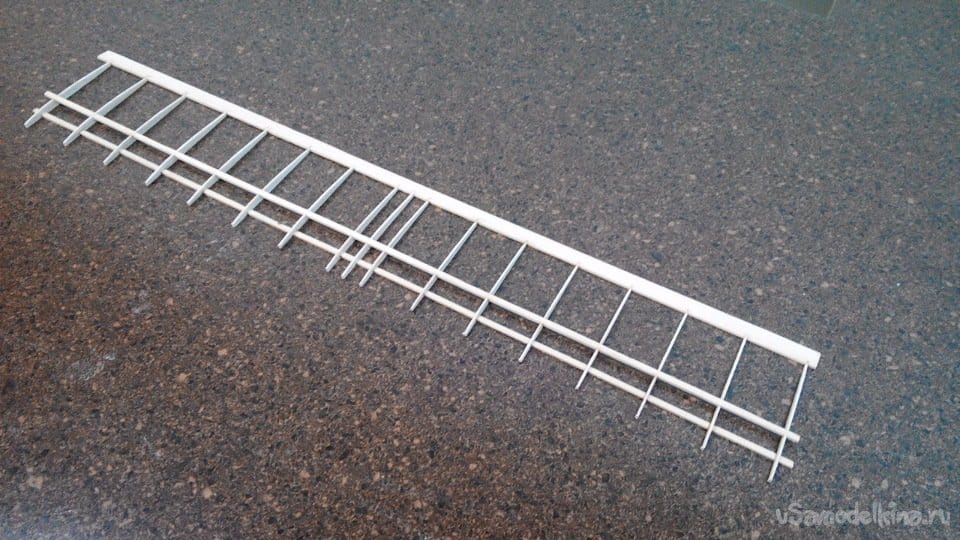 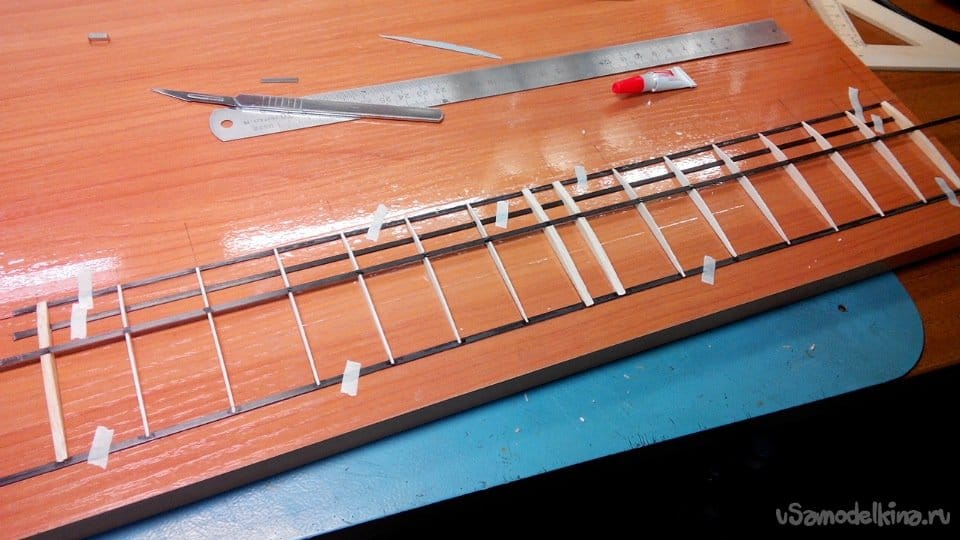 I could not resist, I used 05x3mm carbon strips in one design. I collected everything on cyacrine. 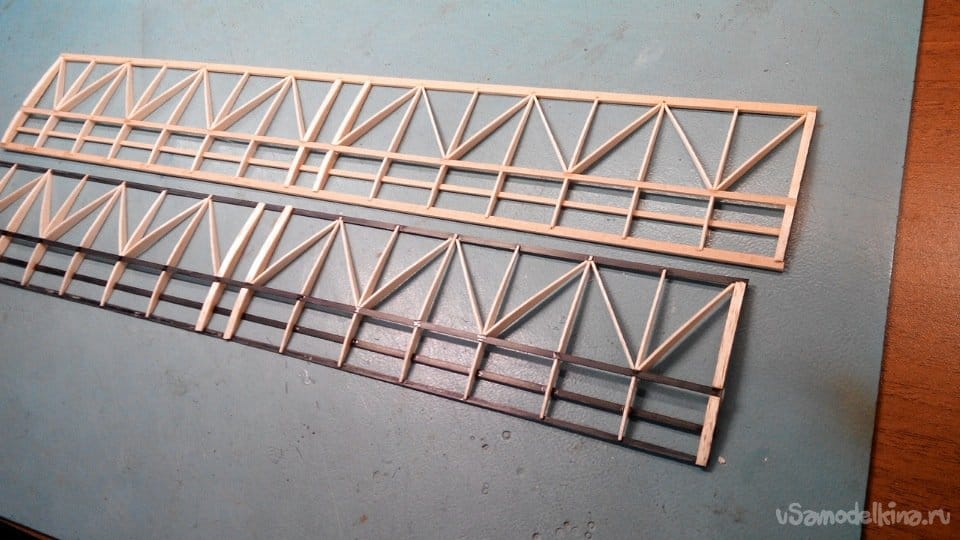 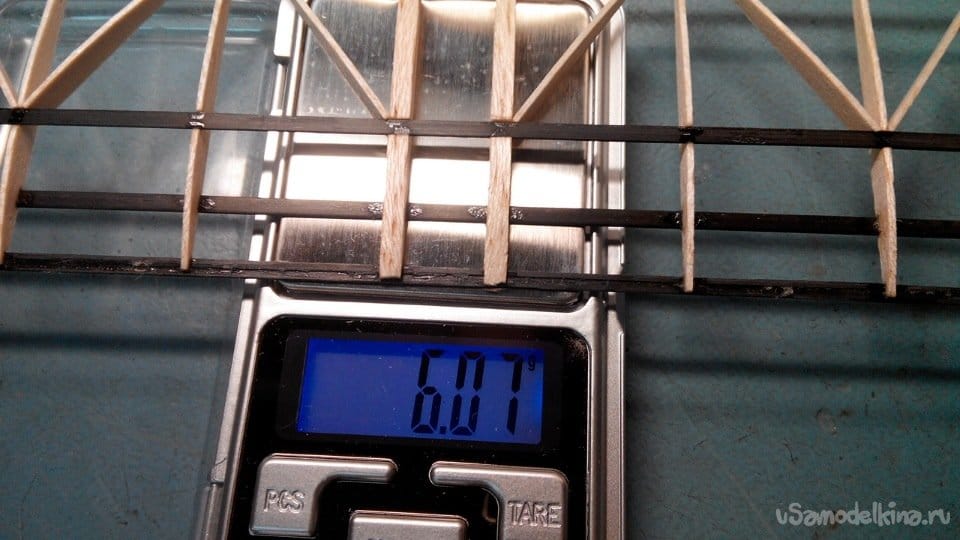 made of thin aluminum.
Now everything is much easier. I covered it with transparent film, the lightest one available. 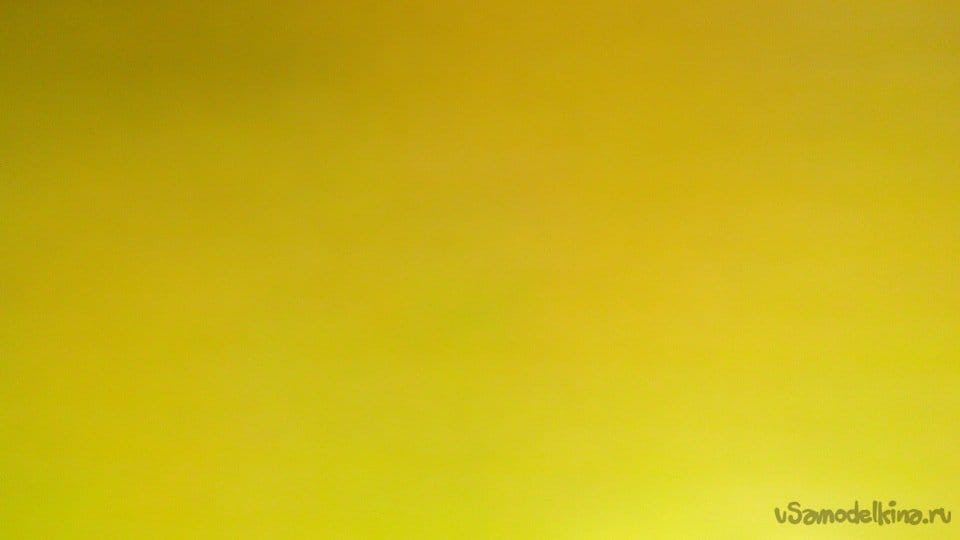 I could not resist, I tried on the tail. Beauty. 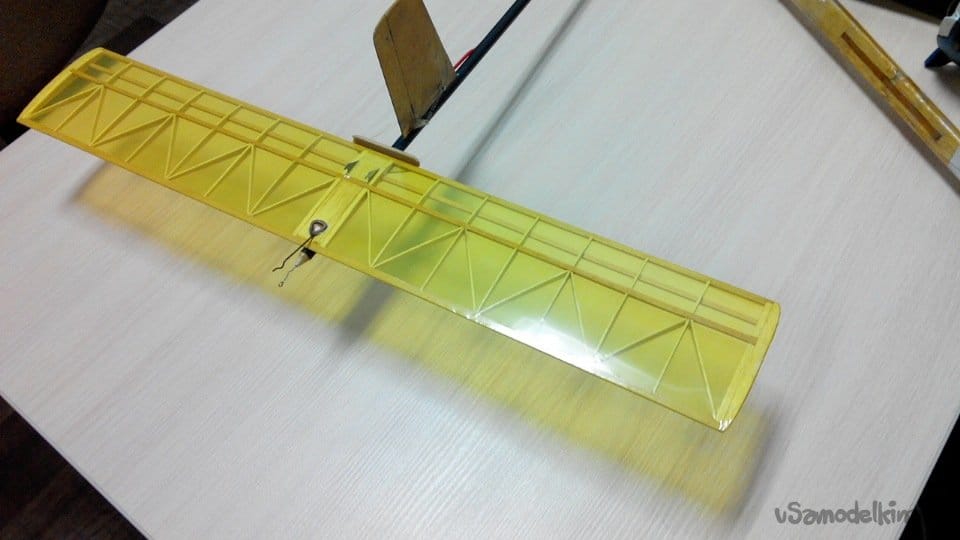 So what's wrong with my wings. Although they have already been renovated, they are very cool.
I did not succeed in soaking the mica paper with acetone. Therefore, I cut everything out with a scalpel. To remove the glue from the ribs, I made several irons with soft plastic sandpaper. I glued everything together with cyacrine. He fixed the skin with carnations. 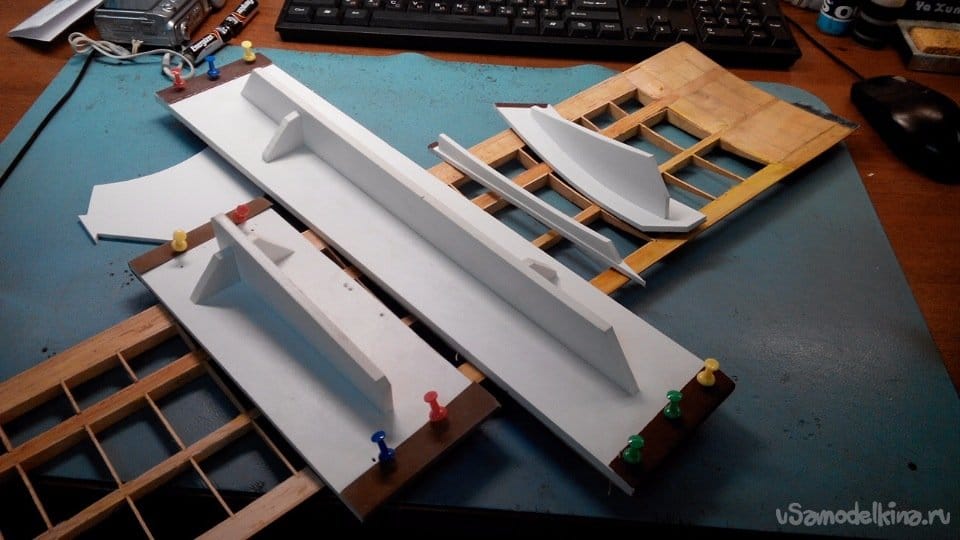 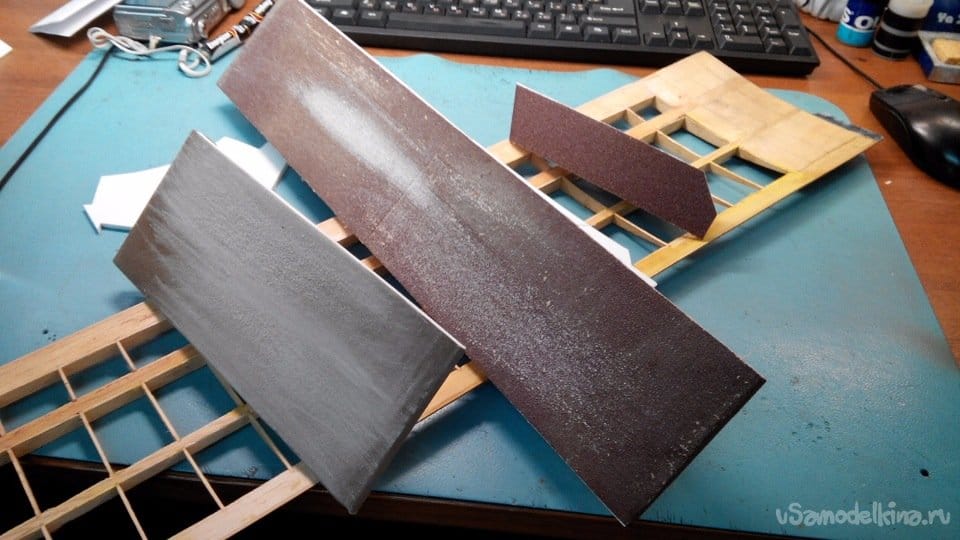 The operation was successful. I replaced several cracked ribs.
The wing ears have a slight twist, this is done for better cornering.
There are several rolls of film. I tighten my wings.
Brought home, look for the center of gravity and adjust. 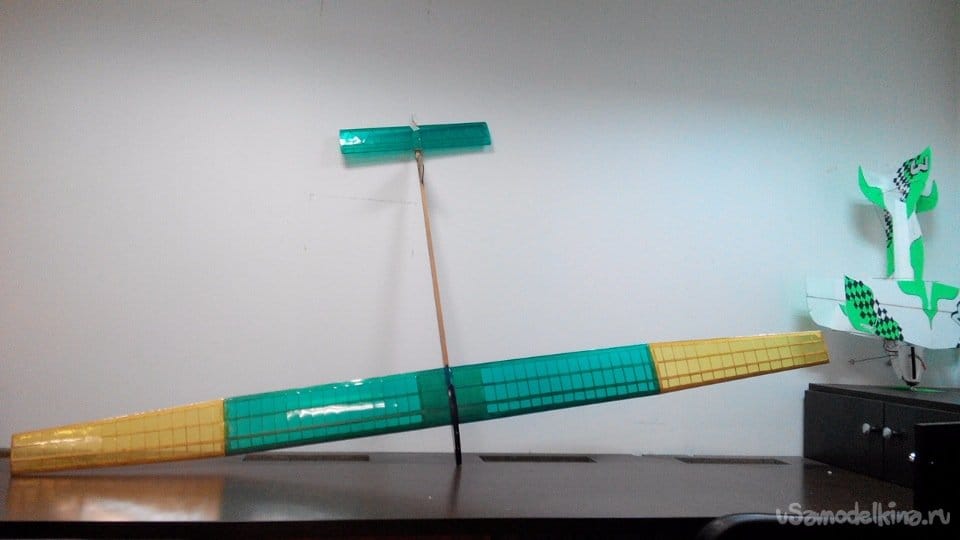 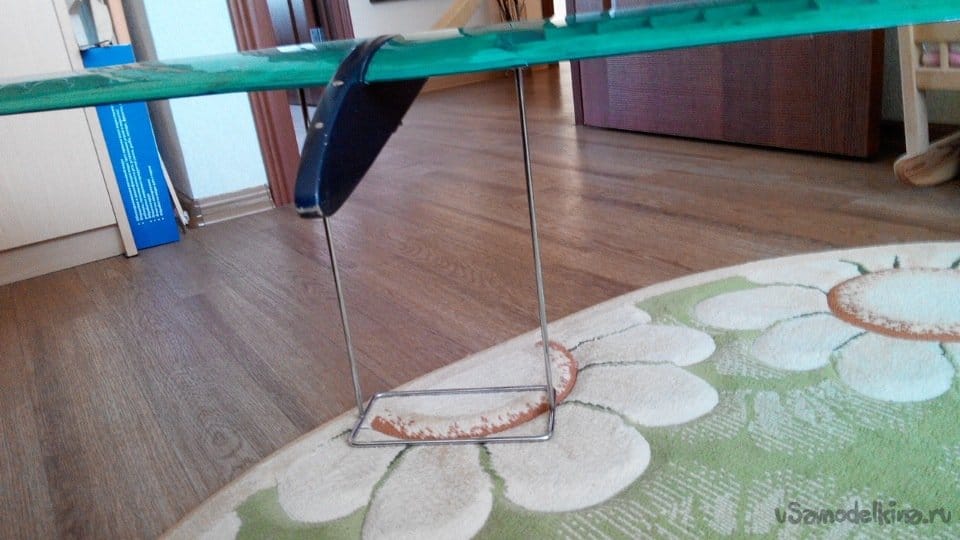 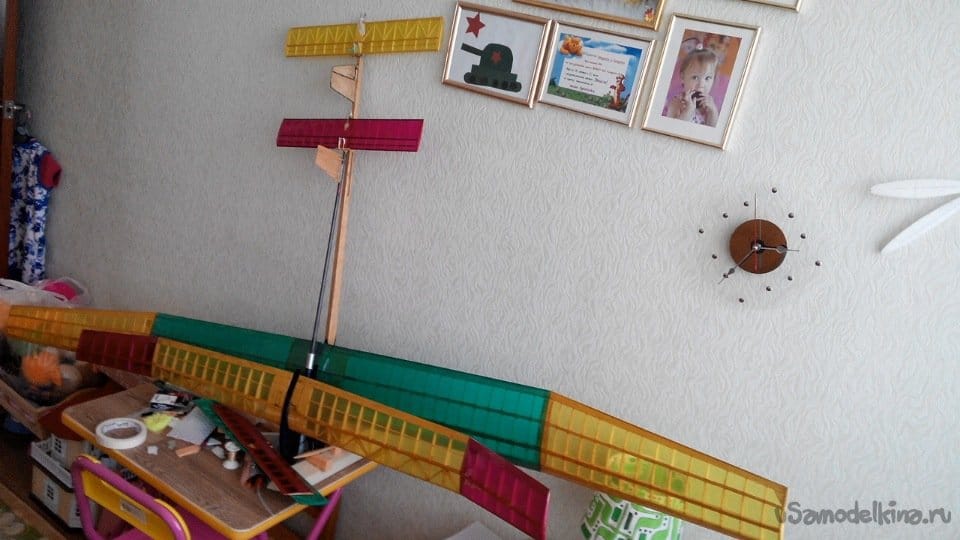 Long beautiful carbon tail had to cut off, did not fit into the center of gravity, even when the nose was loaded. Okay, I'll cut a little. 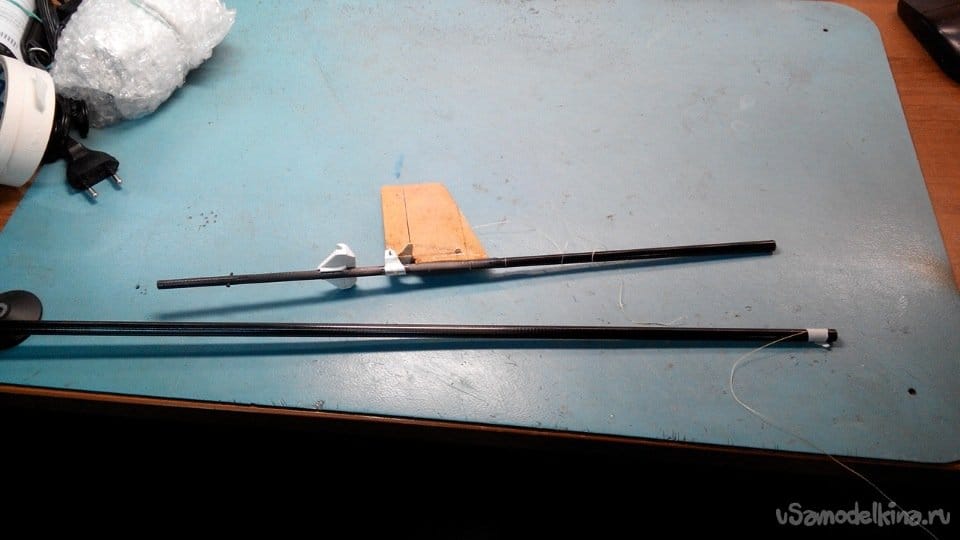 Now what to make a branded wick from?

An Indian aroma stick helped out. I lit it, noted how much it burned out in two minutes. Conducted tests.


Everything is ready for flights.
It's windy and cold on the field. But tests need to be carried out, to find out how everything is set up.
Everything seems to be flying well. This reel has 50 meters of line.
During the next training trip, we held test starts. Children, too, threw away from their hands.
Adult guys started to run. We are not specialists, it turned out crooked.
But the glider flew!
I was a “horse”. Perfectly felt the plane on the handle! Inexpressible sensations!
Launched from the hand.
flew, waiting for summer to fly in thermals. 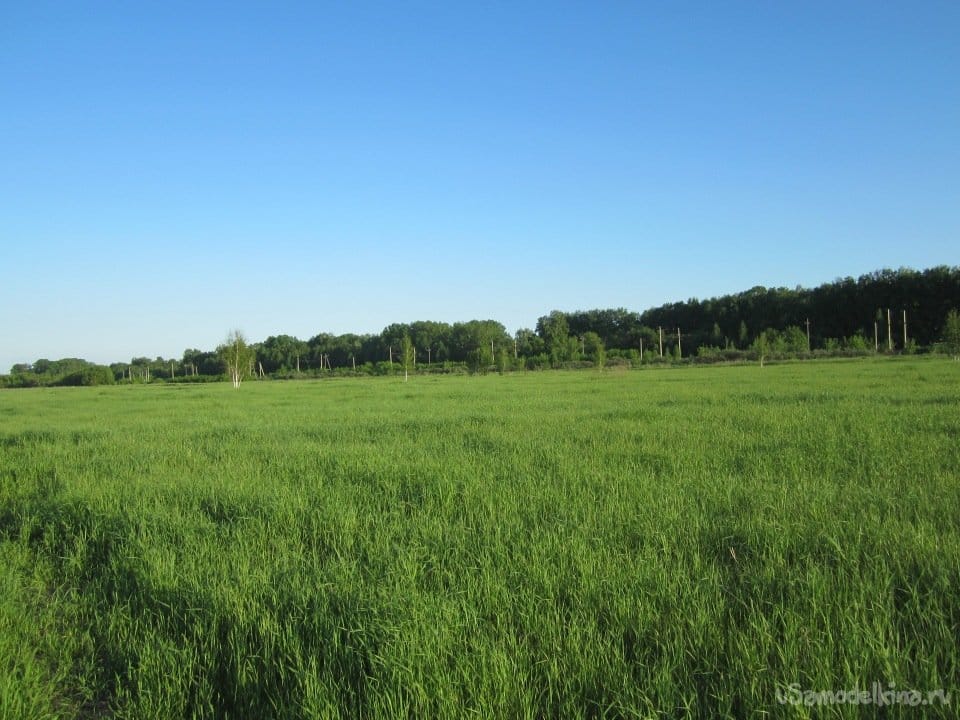 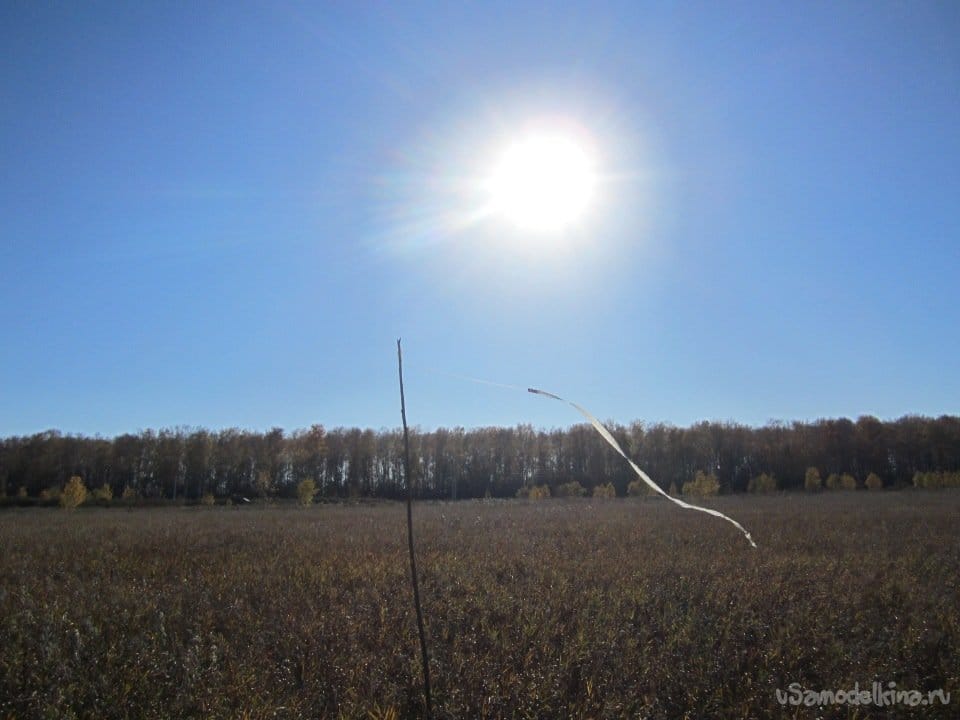 The question topic is automatically published in the social. site network – follow the answers there too: