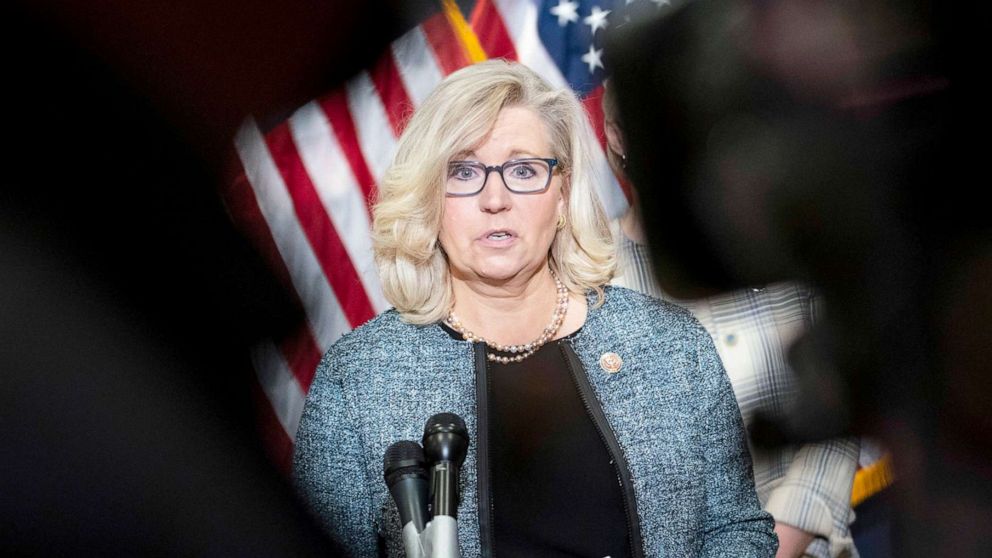 As House Republican leaders actively worked Wednesday to oust a member of their own leadership team — No. 3 Rep. Liz Cheney — the congresswoman wasn’t backing down, but she wasn’t openly fighting the move, either.

The embattled Wyoming representative has told people she doesn’t believe it’s worth serving as the Republican Party’s conference chair if it requires lying about the election results, a source familiar with the congresswoman’s thinking told ABC News.

Late Wednesday, Cheney published an opinion piece in The Washington Post laying out her case, writing, “The Republican Party is at a turning point, and Republicans must decide whether we are going to choose truth and fidelity to the Constitution.”

“While embracing or ignoring Trump’s statements might seem attractive to some for fundraising and political purposes, that approach will do profound long-term damage to our party and our country,” she said.

“History is watching. Our children are watching. We must be brave enough to defend the basic principles that underpin and protect our freedom and our democratic process. I am committed to doing that, no matter what the short-term political consequences might be,” she said.

Cheney has angered her Republican colleagues in the days and weeks following the Jan. 6 Capitol riot by repeatedly calling out former President Donald Trump’s election lies, which she said she believes played a major role in inciting the insurrection.

“I am a conservative Republican, and the most conservative of conservative values is reverence for the rule of law. Each of us swears an oath before God to uphold our Constitution. The electoral college has spoken. More than 60 state and federal courts, including multiple Trump-appointed judges, have rejected the former president’s arguments, and refused to overturn election results. That is the rule of law; that is our constitutional system for resolving claims of election fraud,” Cheney wrote in the Washington Post.

In February, Cheney fought off a challenge to boot her from the coveted leadership position due to similar circumstances, though at the time she still had the support of top Republican leadership.

Cheney kept her leadership role after a closed-door GOP 145-61 vote with a secret ballot.

It’s not clear what the threshold or format will be in any upcoming vote. A spokesman for House Republican Leader Kevin McCarthy did not respond to messages asking about the format of a conference vote.

And it’s unclear if Cheney can hold on to the spot this time around. Sources have told ABC News that a vote to boot Cheney could take place as soon as next Wednesday, during a House Republican conference-wide meeting.

Jeremy Adler, a spokesman for Cheney, signaled Wednesday morning that the congresswoman would not sit back quietly as the intra-party attacks continue.

“Liz will have more to say in the coming days,” he said. “This moment is about much more than a House leadership fight.”

Cheney is not actively whipping colleagues for their support to keep her in the position, a source close to Cheney said.

The congresswoman believes that evading questions about Trump and the election results rather than forcefully answering them — as other GOP leaders have done — is equivalent to “being complicit in the lie,” the source said.

On Wednesday, Trump himself weighed in to criticize Cheney as a “warmongering fool who has no business in Republican Party Leadership.”

Trump has endorsed Rep. Elise Stefanik of New York in the race to replace Cheney.

“We want leaders who believe in the Make America Great Again movement, and prioritize the values of America First. Elise Stefanik is a far superior choice, and she has my COMPLETE and TOTAL Endorsement for GOP Conference Chair. Elise is a tough and smart communicator!”

Stefanik has emerged as the apparent front-runner should Cheney be ousted from her post, sources familiar with the matter told ABC News.

A prominent ally and defender of Trump, Stefanik has been working the phones with her team in a bid for Cheney’s spot, sources said.

In January following the insurrection at the U.S. Capitol, the dean of Harvard’s Kennedy School of Government announced Stefanik was removed from the advisory board of the Harvard University Institute of Politics after her “public assertions about voter fraud in November’s presidential election that have no basis in evidence, and she has made public statements about court actions related to the election that are incorrect.”

McCarthy’s team has begun whipping votes against Cheney and after McCarthy was caught on a hot mic in audio obtained by the Daily Caller saying he’s “had it” with Cheney.

Other Republican leaders have publicly weighed in to support Stefanik.

“House Republicans need to be solely focused on taking back the House in 2022 and fighting against Speaker Pelosi and President Biden’s radical socialist agenda, and Elise Stefanik is strongly committed to doing that, which is why Whip Scalise has pledged to support her for Conference Chair,” a spokesman for Republican Whip Steve Scalise said in a statement provided to ABC News.