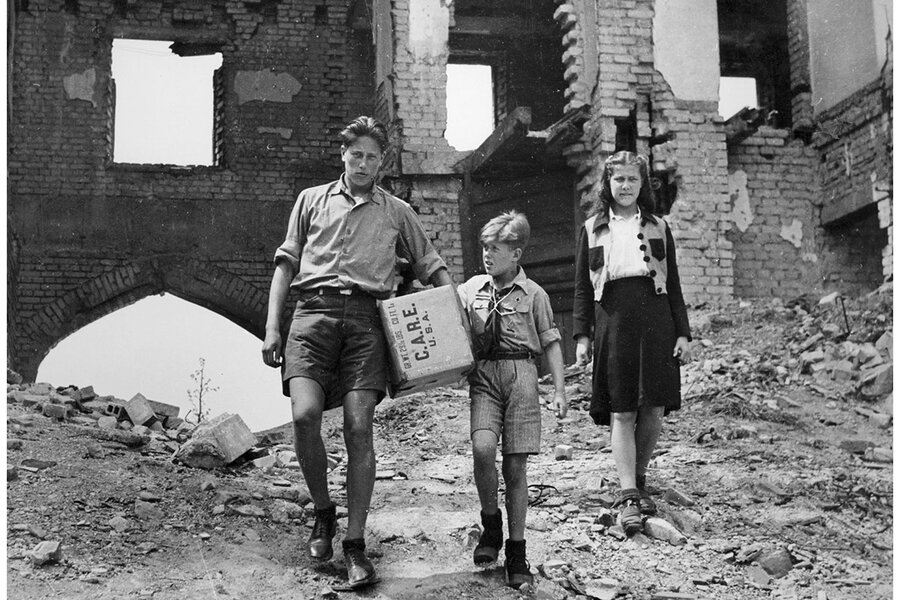 By the 1960s, more than 100 million CARE packages would be delivered across Europe – 10 million in Germany alone, America’s World War II enemy.

And while an inventory list would confirm that each CARE package carried mostly food – canned meats and vegetables, oats, sugar, oil, even chocolate – for many Europeans, they brought forms of sustenance the war had severely depleted: optimism, a renewed faith in humanity, even (in the case of that chocolate) delight.

“We were very hungry, the country was destroyed, so the 30 or so packages we received in my very large family were what kept us going,” says Peter Molt, a German historian who was a teenager in Stuttgart when the first packages marked “USA” arrived at his home.

“For the adults it was food, and very welcome of course, but for the children it was a marvelous thing,” he adds. “There was chocolate, even ice cream powder – it was a real festival.”

In many ways, the CARE package was one of the first examples of hearts-and-minds diplomacy, in that it married a basic humanitarian impulse and desire to help others in distress with America’s postwar vision and strategic goal of rebuilding a prosperous and free Europe.

Postwar Europe was also in the sights of a hegemonic Soviet Union promoting a very different political and economic system from America’s. The CARE packages were a small but key part of the effort to keep Europeans looking westward.

“Those CARE packages not only alleviated hunger in postwar Europe, they also provided hope – hope of better and more peaceful times after those terrible years,” German Chancellor Angela Merkel said in a statement marking the 75th anniversary.

Indeed, for some Germans in particular, the packages were a small miracle. Here from the war’s victorious people, who might have been expected to send punishment and even death, instead came nourishment.

But, Mr. Molt recalls, the CARE packages were also part of a larger vision for Germany’s future that would be democratic, peaceful, and imbued with a deep sense of solidarity with less fortunate people in need.

“We were happy to be in the zone assigned to the Americans” in southern Germany “and not the part occupied by the Soviets,” he says. “For us it was a new start with a new future for democracy.”

Of course, the U.S. government could have simply distributed around Europe the 3 million surplus food rations that had been intended for a planned invasion of mainland Japan that never occurred. But what set CARE packages apart – and made them such integral parts of a new hearts-and-minds diplomacy – is that they were sent by average Americans to people they didn’t know but still empathized with.

“It’s not an accident that you have the complement of the CARE package and the Marshall Plan, ordinary citizens doing their part individually, but also governmental leaders saying this is what we need to do at a more visionary strategic level,” says Michelle Nunn, CEO of CARE USA.

On one level, “you had [former Secretary of State] George Marshall and a bipartisan set of leaders in Congress who frankly did sway public opinion and create the mantle of the Marshall Plan,” she says.

Indeed, President Harry Truman would be one of the first Americans to send CARE packages, she notes, in a televised ceremony at the White House in which he encouraged other American citizens to do the same. Sixteen years later, President John F. Kennedy would declare, “Every CARE package is a contribution to the world peace our nation seeks. It expresses America’s concern and friendship in a language all peoples understand.”

But for Ms. Nunn, the key to that innovative “complement” was the “wellspring of ordinary American citizens … who saw the news of people facing starvation in postwar Europe and said, ‘We won’t stand on the sidelines.’”

It took those two pieces, Ms. Nunn adds, “to create a kind of constellation of American leadership post-World War II that has served us so well.”

Today, the “care package” is a household term, describing perhaps a box of Mom’s cookies sent to a child at a distant college, or a ready-made package purchased on the internet and meant to say “thinking of you.”

And while the real “CARE package” is going strong, it no longer contains canned meats or staples like sugar and flour – in fact, “it no longer comes in cardboard boxes,” notes Ms. Nunn.

These days a CARE package is more likely to come in the form of a hospital in a box, such as the 100-bed temporary hospitals being stood up in India amid the country’s pandemic crisis; birthing kits for expectant mothers in conflict zones of West Africa; or an accelerated graduation program for girls who have missed significant stretches of elementary education but still aspire to secondary school.

And then there is the cash voucher, which allows a family facing hunger to feed itself while also experiencing the dignity of determining for itself the foods that best suit it.

Yet for many of the people on the receiving end of today’s CARE package, the sense of humanity and global solidarity it represents is no less touching or inspiring.

As in the case of Khaled, a displaced Syrian who lives with his family of seven in a tent camp along the Syria-Turkey border and who was interviewed with the assistance of a nongovernmental organization partnering with CARE.

Khaled, who did not want his family name used for security reasons, worries daily about feeding and protecting his family. But perhaps his biggest concern has been his elderly mother, who has great trouble moving around.

Which is why Khaled was so relieved when a new water stand and bathroom were constructed much nearer his family tent.

But his relief turned to amazement, he says, when he was told the new facilities were built with donations from ordinary Americans. Wanting to know more, he looked up CARE the next time he had internet access, and learned that the help that was making life a little easier for his mother was from “a very old organization that has provided aid in many parts of the world.”

And then there is Mousa, a Syrian father of seven whose family was displaced from Raqqa by the Islamic State to a series of villages and encampments in a better but still-insecure area of northern Aleppo.

Mousa, who was contacted similarly, says he felt helpless as he watched his family weaken from lack of food and nutrition. But all that changed when he started receiving a $50 monthly cash-for-food stipend from CARE. “The day I receive the $50, I feel like I own the world,” he says.

Yet something else has changed for Mousa as he has come to understand where the money feeding his family comes from.

“Before the war in Syria began, our view of America was negative and we thought that it was the main cause of wars in the world,” he says. But learning about the American organization helping his family “showed me the opposite.”

Saying he wished to send a message to Americans to assure them their generosity is making a difference, Mousa says, “This is a beautiful thing” that there are people “who provide aid to those affected by wars and disasters without knowing these people.”

As she contemplates those first CARE packages that arrived in Le Havre 75 years ago, CARE USA’s Ms. Nunn says she thinks about how things could have been different – how a victorious America could have turned inward and focused on its own well-being and not worried about a devastated and hungry Europe.

“I think at moments we have been turning inward over the last couple of years, and … it might be tempting to do so again as we turn the corner” on the pandemic, she says.

“But for so many reasons, I think it’s even more important that we recognize our interdependence” and the dimension of that revealed by the pandemic.

In that context, she adds, the CARE package today symbolizes humanity, solidarity, and “recognition that truly our safety is dependent upon the safety of others as well.”

The war on the unemployed