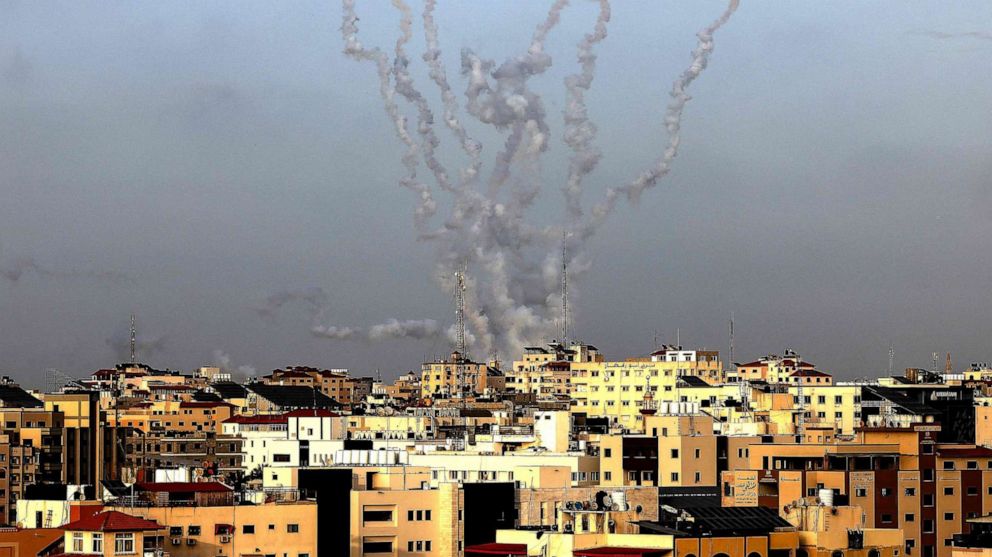 At least seven of the more than 150 rockets launched by militant group Hamas on Monday targeted Jerusalem, according to Israel’s Defense Forces (IDF).

Israeli Prime Minister Benjamin Netanyahu said Monday that a line was crossed when rockets were launched from Gaza at Jerusalem.

“Israel will respond with great force. We will not tolerate attacks on our territory, on our capital, on our citizens and on our soldiers. Whoever attacks us will pay a heavy price,” said an official statement.

Israel retaliated within hours carrying out airstrikes against a number of Hamas installations in Gaza, according to an announcement made by the Israeli military.

The Palestinian Health Ministry told ABC News that 20 people were killed in the IDF attack, among them 9 children, and at least 65 were wounded.

The rocket attacks from Gaza were in response to clashes earlier on Monday between Palestinians, who were protesting Palestinian housing evictions, and Israeli police near the Al-Aqsa Mosque in Jerusalem– known as the third-holiest site in Islam – located on the Temple Mount.

The Israeli police said in a statement on Twitter that “at the end of the prayer on the Temple Mount, thousands of worshipers began to disturb the order, throwing stones and firing fireworks. Israeli police forces are operating at the scene and so far six policemen have been injured.”

The Palestinian Red Crescent reported 522 injured in the clashes with 333 requiring care at hospitals and clinics.

There is growing pressure from the Biden administration to address the new tensions between Israel and Palestinians which marked the first time since 2014 that Hamas has fired rockets towards Jerusalem.

On Monday, U.S. Secretary of State Antony Blinken condemned the attacks during a press conference. He said they “need to stop immediately.”

Spokesperson Ned Price of the U.S. State Department said Monday that although the U.S. has called for a de-escalation of violence, there is still a possibility that the attacks will continue.

“I don’t want to speak to what would happen in the absence of de-escalation, but of course the possibility of additional violence, of extended violence is something we’re concerned about,” he said.