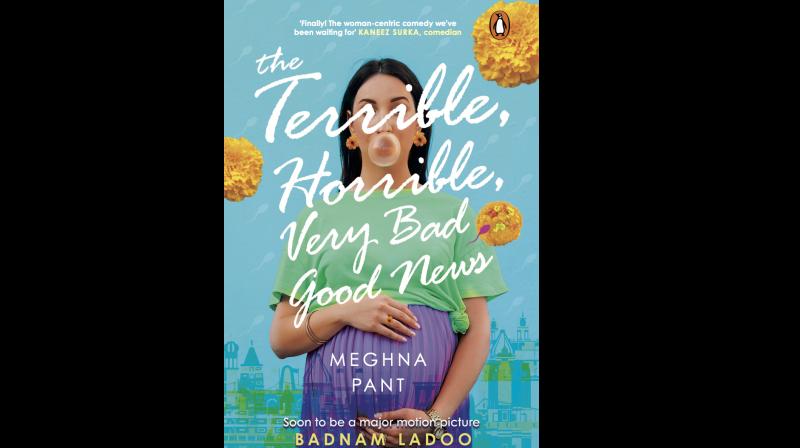 “Thirty-four-year-old Ladoo, a simple middle-class divorcee from Rishikesh, wants only one thing from life — a baby. She eats gondh halwa, drinks badam milk, and takes folic acid to stop her ticking biological clock.” —Sounds familiar? The Terrible, Horrible, Very Bad Good News by award-winning author and journalist Meghna Pant portrays the pain of women who are single or childless as they approach midlife.

“I have been in the shoes of Ladoo (the protagonist). I’ve seen the pressure young women face from family, friends and acquaintances to have children early, and how society judges women after they have crossed a certain age if they are unmarried or childless even today. That’s the reason I wrote about the terrifying feeling Ladoo had when a gynaecologist told her that her ‘eggs were drying up’, and that artificial insemination was her last chance of having a baby,” says Meghna.

Elaborating on the connection she felt with Ladoo, the author says, “I can relate to Ladoo in so many ways. In fact, many people I know were surprised when they learned that both my daughters were born through normal pregnancy and normal delivery after I had crossed 35 years of age.” Stressing that the idea that female fertility is related to a certain age is a misconception, Meghna notes that “Society is judgemental of single mothers. They are the ‘leftover women’, and so, much taboos are attached to them.” Through the book, she hopes to take the conversation ahead and clear misconceptions.

“Ladoo’s story about finding the right sperm donor, whose kundali matches hers, while fighting social stigma, her mother’s opposition, her own ticking biological clock and mixed feelings about whether Mr Right Donor can also be Mr Right, is something every woman –– young or old –– can identify with,” the author says.
“Through the book, I have tried to convey in a humorous way the importance of ‘my body, my rules’ rather than going with the hackneyed idea that it’s important to have kids early,” she explains.

The book will soon be made into a motion picture titled Badnam Ladoo. “I wrote this story as a screenplay first and then it became a book. The book’s title The Terrible, Horrible, Very Bad Good News is a play on the term ‘good news’ often used to suggest pregnancy,” says Meghna. “I started writing the book during the pandemic to find release from everything that was happening around. The writing helped me. I like writing and reading fiction. This is my first attempt at the humorous style. I believe the pandemic helped me to express myself this way; perhaps, at any other time, I would have written it in a serious style.” Meghna has won awards for her contribution to literature, gender issues and journalism. Her debut novel, One & a Half Wife (2012), won the national Muse India Young Writer Award (2014) and was shortlisted for several other awards, including the Amazon Breakthrough Novel Award. Her debut collection of short stories, Happy Birthday (2013) was long-listed for the Frank O’Connor International Award (2014). She was also long-listed for the Commonwealth Short Story Prize (2018).

Meghna says she tried out different career paths before she found her niche. “I did 20 different jobs before becoming a writer, from pursuing law, CA, working in an advertisement firm and acting, to doing MBA and taking up a fancy job in Switzerland. I came to Mumbai to become a journalist. It was when I was in New York that the writing bug actually bit me hard and I settled down to become a full-time writer.”

But being a full-time writer has its own set of problems, starting with finances, she shares. “Writing doesn’t pay much. That’s the reason I took up writing screenplays for movies and web series, as the pay package is good. I would advise every author to have a backup profession. There is a lot of demand for talented writers,” Meghna says, adding, “Two of my scripts have already been picked up and I have quite a few book releases scheduled.”