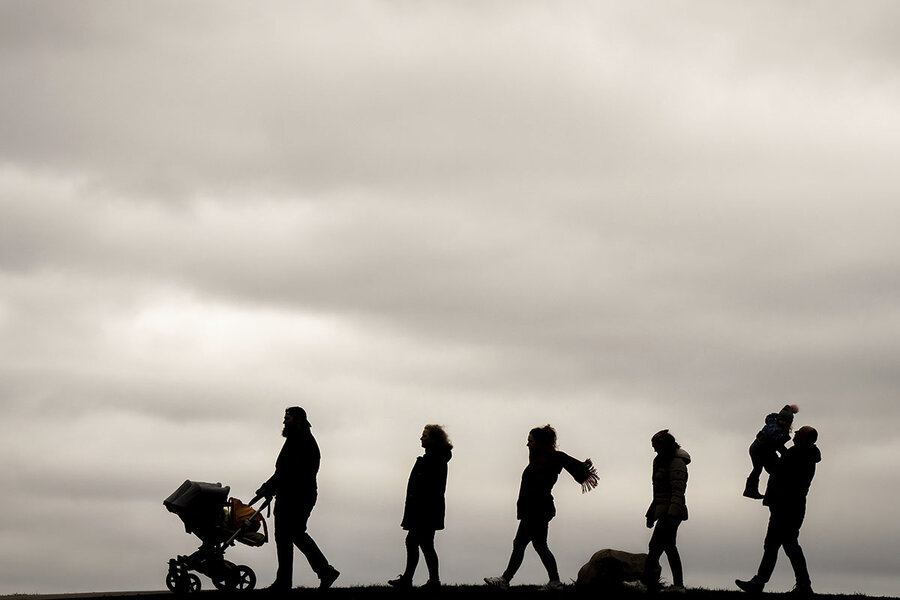 But she says she appreciates that the German government deposits nearly 1,000 euros ($1,200) into her bank account each month. Kindergeld – literally “children money” – steps up with each additional child, and has been for six decades a cornerstone of the German family social support system.

In theory, the monthly cash was meant to level the playing field for parents by exempting basic child-rearing expenses from the tax collector. In practice, it’s allowed Ms. Salzmann freedom and flexibility. Buoyed by Kindergeld, along with another payment that supports parenting’s early years, she could take time to be with her children before heading back to work as an economist and civil servant in Dresden.

“There is a financial burden of raising children, and Kindergeld feels like appreciation from the state for doing this,” says Ms. Salzmann. “And, it’s – not only in fact, but also psychologically – important that you get more money for the third and fourth child.”

President Joe Biden’s one-year expansion of tax credit to American families to around $250-300 a month per kid has shone an analytical light on Germany, Australia, Canada, and about 100 other countries that provide some kind of universal child benefit. Germans have long enjoyed the world’s largest child benefit, covering more than 15 million kids, and their country’s policy journey is instructive: It never garnered conservative opposition the way it has in the United States. Both left and right approved of it when it was rolled out decades ago, and today the policy is too beloved to touch.

“If you measure it against the four objectives that family policy has in Germany, unconditional child benefits are not as effective as, say, investments in public childcare,” says Helmut Rainer, an economist specializing in family affairs at the ifo Institute in Munich and the University of Munich. “But they’re incredibly popular, and they increase in popularity during the run-up to elections.”

Good for families, with caveats

In Germany, Kindergeld is paid unconditionally. That means families receive the payments whether they’re barely surviving or, conversely, earning hundreds of thousands of euros a year (though it’s technically an advance payment against a tax credit for high earners). The cash arrives in a family’s bank accounts through a child’s 18th birthday, with extensions up to age 25 for students and 27 for those with disabilities.

Such benefits help keep children above subsistence level, researchers say, with most OECD countries that offer them showing lower-than-average child poverty rates. In fact, in Germany, child benefits account for half the impact of cash transfers on child poverty reduction, according to a 2020 UNICEF report.

Indeed, what Kindergeld does well is to improve housing conditions and expenditures on food. Such benefits promote “children’s and wider social outcomes,” according to UNICEF, and has a more significant impact on lower-income families.

While American critics of unconditional payments argue they could be abused, experts did not find the money boosts parents’ spending on drinking and smoking, according to a 2012 study. The study did find that for older kids, the money helps keep them in sports, social, and personal activities.

Yet Kindergeld is a huge government expense that doesn’t necessarily boost other family-policy-related goals, says Dr. Rainer, the economist. For example, Kindergeld hasn’t helped measurably increase the birth rate – important for a country suffering a labor shortage as well as a shrinking tax base – and the money has also been found to supplant paid work. In other words, buoyed by the monthly payments, women may be more likely to stay with the kids than work outside the home for a period of time.

“The main reason is that Kindergeld is an unconditional cash payment from the state,” says Dr. Rainer, who co-wrote a study about Kindergeld’s effects. “There’s always a risk that it gives a disincentive to work.”

Some children do benefit from mothers staying home, but the effects often depend on socioeconomic status. In other words, buoyed by the monthly payments, women may be more likely to stay with the kids than work outside the home for a period of time – which does have benefits for many children.

Over the decades, Kindergeld has gathered little true political opposition. Conservatives have appreciated the choice families are allowed in how to spend the money. Liberal policymakers might have preferred more infrastructure spending, such as investments in child care centers or kindergartens. But overall, Kindergeld is universally supported.

“This is because of the demographic situation in Germany. We are an aging population,” says Barbara Henman-Sturm, a lecturer at the Federal University of Applied Administrative Sciences. “We have an aging society, and a social system based on a state social security scheme. Everyone knows this system doesn’t work without children [growing up to work and pay into the system]. So there is just no discussion.”

Kindergeld was first passed into law in the mid-1950s, but initially it was only paid out beginning with the third child of working parents, part of an attempt to boost living conditions during the post-war period. Over the years, the policy expanded to include earlier siblings, and also increased in amount. Eventually, the Supreme Court ruled parents had the right not to be “penalized” for raising children, and child benefits were written into the German constitution. Thus, Kindergeld became institutionalized.

Other policies such as Elterngeld, paid to parents during the first years after a child’s birth, as well as social welfare for lower-income families, complete a system of support available to families in Germany. During the pandemic, families also received 300 euros as a one-time payment.

All of Ms. Salzmann’s four children still receive Kindergeld. The oldest is 24 and is still a student, while the youngest, age 18, is in high school. The university students also receive money under the German Federal Training Assistance Act, or BAföG, which provides student funding of roughly a few hundred euros a month. “They have to pay half back, but only after they finish studying,” says Ms. Salzmann.

After the children began leaving for college, they asked Ms. Salzmann if they could tap Kindergeld for their own living expenses. That’s when, faced with Kindergeld’s looming absence, Ms. Salzmann realized how much she’d come to count on the monthly payments to help with extracurriculars, sports club fees, Christmas presents, and all the other things children require.

Kindergeld may not have been enough to incentivize her to have more children, she says, but it certainly supplemented the cost. She might also have had to go back to work earlier without it.

“And [my absence at home] would have come at the expense of our children,” says Ms. Salzmann, who is now the primary breadwinner of the family. “Creating a stable base for our children and the future taxpayers of our country is important.”