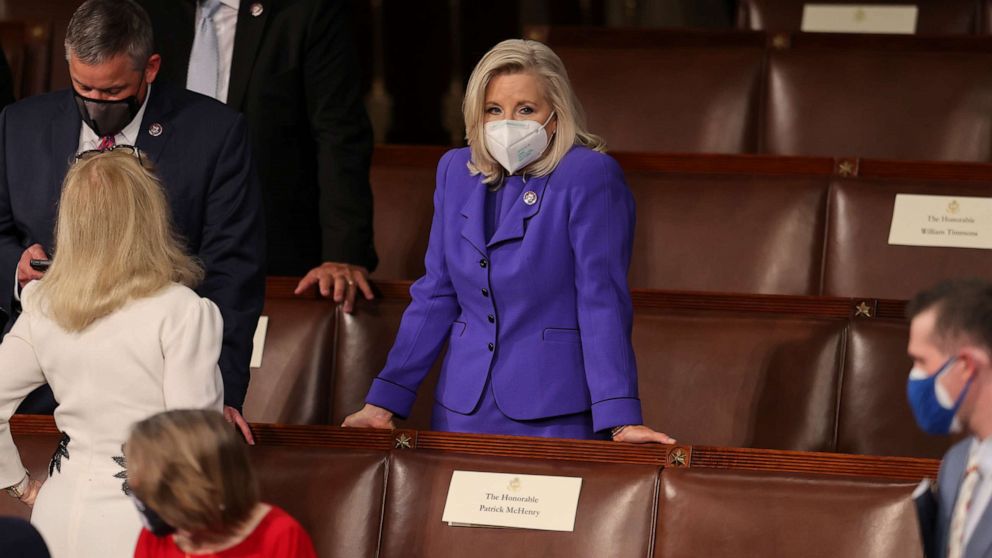 Republicans are also set to punish the third-ranking member of their House leadership team for supposed disloyalty where she chose to tell the truth — when, of course, it’s Trump saying the opposite.

The through-line, as is so often for the GOP, is what Trump thinks is good for him. Now, four months after the attempted insurrection at the Capitol, the former president remains off of Facebook and Twitter but still is in the position to dictate both personnel and policy to his party.

It’s already close to a foregone conclusion that Rep. Liz Cheney, R-Wyo., will lose her slot in leadership to Rep. Elise Stefanik, R-N.Y., next week. Any attempt to minimize the importance of the moment is being undercut by Cheney herself, who isn’t so much trying to keep her job as she is laying a marker for the future.

“The Republican Party is at a turning point, and Republicans must decide whether we are going to choose truth and fidelity to the Constitution,” Cheney wrote in a Washington Post op-ed.

Cheney is calling for steps — a bipartisan commission looking just at Jan. 6, and moving away from what she calls a “dangerous and anti-democratic Trump cult of personality” — that she knows a majority of Republicans in neither Washington nor Wyoming would support.

It’s notable that, in addition to attacking Cheney, Trump on Wednesday chose to blast Senate Minority Leader Mitch McConnell and former Vice President Mike Pence, all in continued service of his false claims about the election.

Trump was practically proving the point that loyalty to him matters only so long as he sees political advantage in it. It’s a lesson Cheney and a growing list of other conservatives have learned, yet seem unable to do anything about.

While House Republicans fight among themselves over Cheney’s fate, the Senate minority leader is staying out of it.

Instead, McConnell is plotting his course in the Senate, complete with plans to further obstruct the Biden agenda.

“One hundred percent of my focus is on stopping this new administration,” McConnell said during an event in his home state of Kentucky. “We’re confronted with severe challenges from the new administration and a narrow majority of Democrats in the house and a 50-50 Senate to turn America into a socialist country and that’s one hundred percent of my focus.”

The message harkens back to the Obama years when McConnell vowed to obstruct Obama’s agenda and make him a one-term president.

McConnell’s admission is a far cry from the Republican epiphany Biden envisioned lawmakers having post-Trump and could signal real trouble for Biden’s legislative priorities.

The inflammatory statement could only fuel Democratic lawmakers’ desire to change Senate rules and go it alone — without Republican support — to pass Biden’s biggest plans.

The next showdown over voting rights comes Thursday in Texas, when the Republican-backed House Bill 6 — which seeks to revise the state’s election laws — heads to a floor vote.

It comes after weeks of pushback from corporate giants, who repeatedly voiced opposition to restrictive legislative proposals raised by Texas Republicans. In response, the GOP vehemently pushed back on those businesses that weighed in on the bills.

While Texas Lt. Gov. Dan Patrick said in April that there would be no “quid pro quo” against companies critical of the state’s election bills, Sen. Ted Cruz, R-Texas, castigated “woke CEOs” in a Wall Street Journal op-ed. He also announced he would “no longer accept money from any corporate PAC” and urged Republicans at all levels of government to follow suit.

“When there are bills that engage in voter suppression, voter intimidation, restricting access to the polling place — that’s not partisan, that’s just downright wrong,” Turner said at a press conference, while urging business leaders to make greater strides in opposing the bill before it is enacted into law.

ABC News’ “Start Here” podcast. Thursday morning’s episode features ABC News’ Conor Finnegan, who tells us why the US is now considering sharing the intellectual property around COVID-19 vaccines with the rest of the world. Harvard University’s Joan Donovan examines the decision from Facebook’s oversight board to uphold the suspension of former President Donald Trump – at least for now. And ABC News’ Luis Martinez has more on the rise of extremism within the military ranks. http://apple.co/2HPocUL