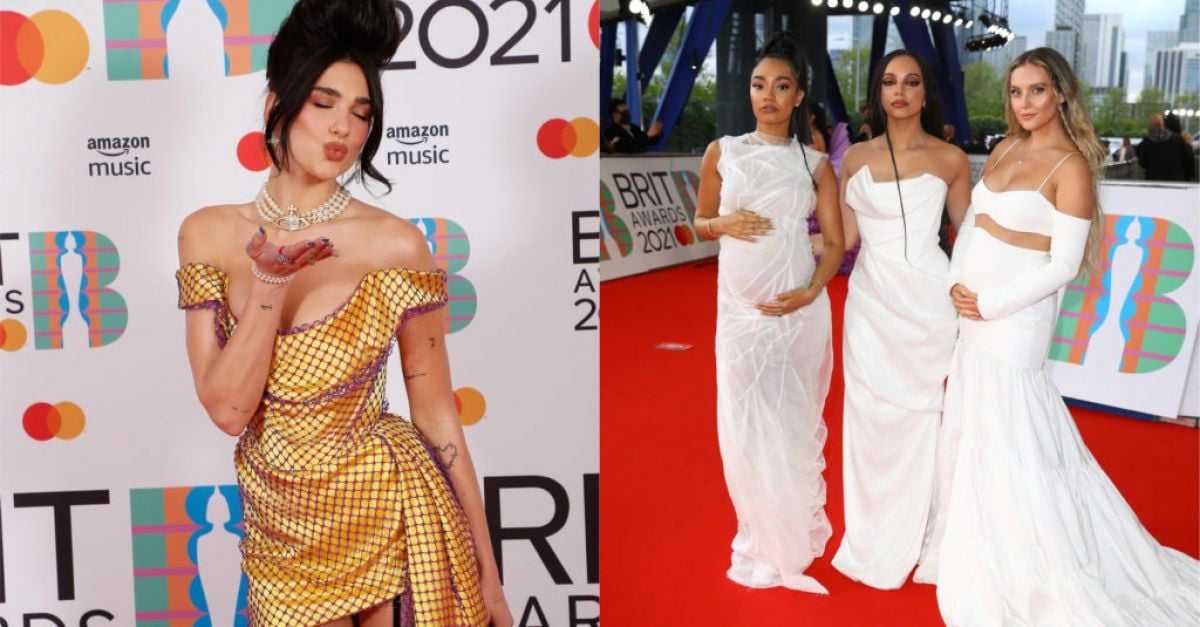 Much of the Brit Awards felt unusual. After a year of virtual events, it was a joyous return to live music – with an audience of 4,000 people at the O2 in London, most of them key workers.

Audience members didn’t have to socially distance or wear masks when seated, almost feeling like a return to normality – and for the occasion, you can be sure celebrities brought it in the style stakes.

The red carpet gave us drama, colour and feathers – but also an overriding sense of soft glam. While there were certainly some statement looks, the overall trend seems to be about looking and feeling fabulous…

It was a huge night for Dua Lipa, who took home the awards for best female solo artist and best album. She did so in suitable style – paying homage to Amy Winehouse with a vertiginous beehive, paired with a yellow Vivienne Westwood corset dress, a matching train and the brand’s signature pearl choker.

The 2020s or the Roaring Twenties? Singer Celeste harked back to the flapper era in a fluffy minidress by Ashley Williams, with bejewelled straps and bright red high heels.

Never one to phone it in on the red carpet, Billy Porter wore an edgy black ensemble by threeASFOUR with a sculptural hat by milliner Stephen Jones.

Hot off the back of Little Mix’s double pregnancy announcement – members Leigh-Anne Pinnock and Perrie Edwards both revealed their happy news in the past week – the trio hit the red carpet in ethereal white outfits. Little Mix went on to make history by becoming the first girl band to win the best group award, with Jade Thirlwall dedicating the win to previous bands who had been snubbed, including Spice Girls, All Saints, Sugababes and Girls Aloud.

Olly Alexander went all out with his vibrant red carpet outfit: a star print monochrome suit with a pale blue shirt and statement fluffy sleeves. We just hope Alexander ate before putting on the suit – those sleeves would be sure to get in your dinner.

Arlo Parks was named breakthrough artist on the night, and her red suit was a triumph in chic Seventies-inspired tailoring.

The Haim sisters wore cult label The Row for their red carpet appearance – the exclusive brand helmed by Mary-Kate and Ashley Olsen. All of their looks were relaxed and chic: a real masterclass in oversized tailoring.

Would you expect to see Harry Styles wearing anything other than Gucci? Another Seventies-inspired look, Styles topped off his funky brown tailoring with one of the brand’s classic leather bags with a bamboo handle.

Taylor Swift accepted the global icon award in the most Taylor Swift outfit ever: a glittering two-piece made up of a silver bralette and matching skirt. The singer’s style definitely seems to operate on the ‘If it ain’t broke, don’t fix it’ mentality.

Wearing a black Area dress and Bulgari necklace, presenter Maya Jama’s look was all about opulence: lots of glittering diamonds, right down to her shoes.

We hate to break it to you, but it looks like Crocs might be the shoes of the summer

Is ‘lockdown’ the answer?

Nine weird and wonderful wedding locations in Ireland and the UK

Do you have any good news?