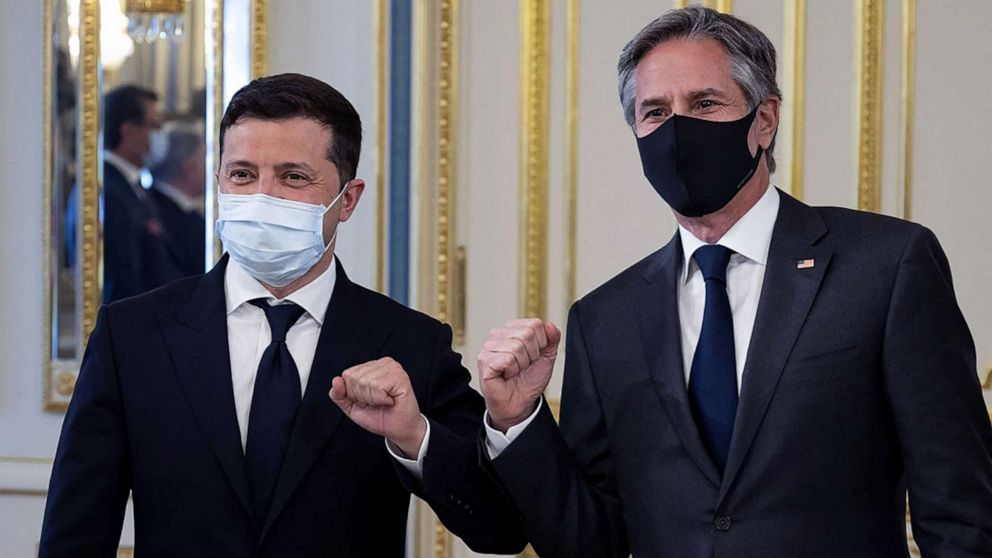 Secretary of State Antony Blinken spent less than 24 hours on the ground in Ukraine’s capital, but his day of meetings was meant to send a strong, important signal amid the “twin” threats of Russian aggression and corruption, he said.

Ukraine is only the sixth country the top U.S. diplomat has visited — before other key allies or even whole regions, and just over 100 days into the Biden administration.

As Blinken put it before his meeting with Ukrainian Foreign Minister Dmytro Kuleba, “I thought it was important as early as possible to come and say so in person” that President Joe Biden is committed to Ukraine.

That message of strong support contrasts with the chaotic signals sent by former President Donald Trump, who tried to withhold lethal weapons and a White House meeting to get Ukrainian President Volodymyr Zelenskiy’s government to announce investigations into then-candidate Biden, his son Hunter, and Hunter’s role on the board of a Ukrainian energy company. That effort ultimately resulted in his first impeachment in late 2019.

But Blinken also carried with him some strong warnings, urging Zelenskiy, his top officials and Ukrainian lawmakers to enact reforms to counter corruption, strengthen Ukraine’s young democracy, and bolster its institutions.

“Ukraine faces twin challenges — aggression from outside coming from Russia, and in effect, aggression from within coming from corruption, oligarchs and others who are putting their interests ahead of those of the Ukrainian people,” Blinken said during a press conference with Zelenskiy.

In the shadow of that threat looms Rudy Giuliani, Trump’s personal attorney whose home was raided by the FBI last week as part of an investigation into his alleged lobbying efforts in Ukraine. Giuliani was at the heart of Trump’s efforts to push Zelenskiy, serving as the primary interlocutor with top Ukrainian aides.

“Let’s not talk about the past. Let bygones be bygones, and let’s discuss the future,” Zelenskiy told reporters when asked about Giuliani, pivoting to instead talk about his government’s counter-corruption reforms.

Instead of discussing Trump, Blinken talked with Zelenskiy, Kuleba and others about boosting U.S. support for Ukraine, especially against continued Russian aggression. While that Russian military build-up on Ukraine’s borders has drawn down, Russia continues to occupy Ukraine’s Crimean Peninsula, lead and arm separatists in Ukraine’s eastern provinces, block access to the Sea of Azov and use hybrid warfare against Kyiv, like cyber attacks and disinformation.

Both Zelenskiy and Blinken warned the threat remains substantial, including for military action.

“Russia has the capacity on fairly short notice to take aggressive action if it so chooses, and so we are watching this very, very carefully,” Blinken told reporters.

At one point during their press conference, there was an issue with the simultaneous translation, and Zelenskiy, a comedian prior to becoming president, quipped it must be “Russian translators, they’re here. They’re everywhere.”

But despite Ukraine’s requests for more lethal weapons, there was no announcement during the trip of any new U.S. deliveries. Instead, Blinken and others have said they’re actively reviewing what Ukraine needs and what the Biden administration will provide.

Former President Barack Obama declined to sell Ukraine lethal weapons, saying it would escalate the conflict with Russia. Trump approved the sale in late 2017, but when the newly inaugurated Zelenskiy asked for more anti-tank missiles in 2019, Trump famously responded, “I would like you to do us a favor though,” according to a White House memo about the call — which later was the center of Trump’s impeachment.

In addition to withholding anti-tank weapons, Trump’s White House was withholding a meeting between him and Zelenskiy, asking that in exchange they first launch the Biden investigations.

On Thursday, Zelenskiy publicly invited Biden to visit Kyiv, too, and Blinken said he would “welcome the opportunity at the right time.”

Trump and his allies defended their actions with Ukraine by saying they were fighting corruption in Ukraine — although critics say their actions actually fostered it by ousting U.S. ambassador Marie Yovanovitch and backing the corrupt former prosecutor-general.

In contrast, Blinken met with anti-corruption activists, praising them for being “on the front lines in that second fight against corruption and for a democracy” and asking what they believe the U.S. can do to better support their efforts.

He warned Zelenskiy directly of the “powerful interests lined up against reform and against anticorruption efforts. Those include external forces like Russia but also internal forces like oligarchs and other powerful individuals who are pursuing their own narrow interests through illegitimate means.”

In particular, his State Department has scolded Zelenskiy’s government for replacing half of the board of Ukraine’s state-run energy firm Naftogaz with allies — an issue Blinken raised in person with Zelenskiy as well.

While Blinken made no mention of Trump or Giuliani, even when asked about it by reporters, he did acknowledge how U.S. embassy staff were dragged into the impeachment. Beyond Yovanovitch, staffers like her replacement, charge d’affaires Bill Taylor, and David Holmes, who served as political counselor in Kyiv, were called to testify about Trump’s plan.

“Even before COVID, Ukraine and this mission were pulled into matters that should not have been the case, and one thing that’s very important is that politics stops at the C Street door, and that’s very much the case now,” Blinken told staff during a virtual meet-and-greet, referring to the entrance of the State Department’s Washington headquarters.

Victoria Nuland, the State Department’s new, third highest-ranking official, joined Blinken for his stop in Kyiv, another strong gesture. In 2014, Nuland was the top U.S. diplomat for Europe when she visited the pro-Western Maidan square protests in Kyiv that ousted the pro-Russian president. Ukrainian Prime Minister Denys Shmyhal praised her visit as “symbolic,” while Foreign Minister Kuleba joked warmly that he missed her baked goods.

Nuland has long been a foe of Russia. At the height of that Ukrainian revolution, her conversation with another U.S. diplomat was hacked and leaked by Russian intelligence. Her line, “F*** the EU,” caused a stir, but it didn’t divide the U.S. and EU in backing Ukraine’s protesters.

Blinken paid tribute to those protests and the Ukrainian soldiers killed in the ongoing war in eastern Ukraine with Russian-led separatists at the Wall of Remembrance. Afterwards, he toured St. Michael’s, a monastery and church that houses the Tomos of Autocephaly — the decree establishing Ukraine’s independent Orthodox Christian church in 2019.

The stops on a brisk spring day in Kyiv were two more symbols — nods to Ukraine’s latest nationalist steps that have further separated the country from its dominant neighbor Russia.