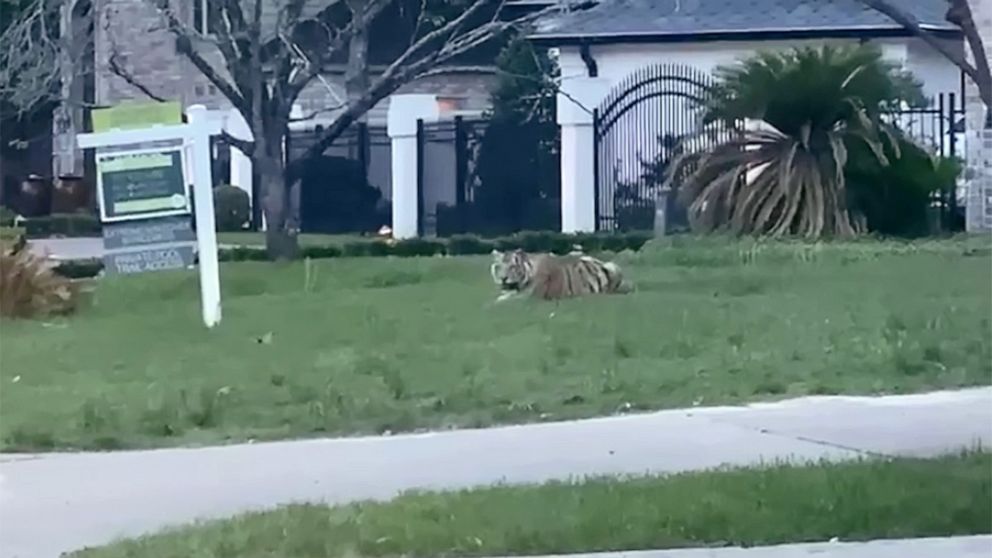 When Maria Torres and her sister-in-law got an emergency notification on the Nextdoor app Sunday night, they had to do a double-take. It said a tiger was on the loose in a nearby Houston neighborhood.

Instead of staying in the house with their doors locked, the two women went on an impromptu safari.

“We got in the car and went to check it out,” Torres told ABC News on Monday.

When they reached Ivy Wall Drive in west Houston, they could barely believe their eyes. Torres took out her cell phone and started recording several people confronting a striped Bengal tiger, including an off-duty law enforcement officer backpedaling with his gun aimed at the big cat.

“At first we thought the tiger was walking toward the guys to attack but we realized that he was just trying to go across the street to the house where they were keeping him,” Torres said. “I’m so glad he didn’t get shot, but the off-duty cop was very close to doing so. How do you not realize that your pet tiger is missing?”

The tiger’s owner, identified by police as Victor Hugo Cuevas, 26, was taken into custody Monday night, according to the Houston Police Department. Cuevas allegedly fled the scene with the tiger Sunday night just as police were arriving. Police said Cuevas was charged Monday afternoon with felony evading police.

During an earlier news conference, Houston Police Commander Ron Borza said Cuevas was previously arrested in July 2020 and charged with murder stemming from a 2017 fatal shooting outside a sushi restaurant in Fort Bend County, Texas. He was free on $250,000 bail.

The tiger is still unaccounted for.

Victor Senties, a spokesperson for the Houston Police Department, told ABC News that 911 calls began pouring in at about 8 p.m. Sunday from citizens reporting the strange sighting.

“Witnesses claimed they were driving by the residence and they see what they describe as a Bengal tiger sitting on the front lawn,” Senties said.

He said one of the 911 callers was an off-duty Waller County sheriff’s deputy who was in the area at the time and sprang into action.

“[The deputy] somehow gets notified or gets wind of what’s going on, and he ends up going to the scene, and he’s trying to maintain safety out there and keep everybody back and make sure everything’s OK,” Senties said.

Video taken by Torres and other stunned neighbors showed the suspect exit a house on Ivy Wall Drive, grab the tiger by its collar and escort it back into the home.

“The owner of the tiger then takes the tiger … puts it inside his white Jeep Cherokee, gets in the car and he flees,” Senties said. “Our responding units see the vehicle fleeing and they try to initiate a vehicle pursuit, but they lose sight of the vehicle.”

Cuevas also reportedly has two monkeys, Borza said, but he added that monkeys are legal to possess in Houston if they are under 30 pounds. He said the whereabouts of the monkeys are unclear.

He said the investigation is being handled by the police department’s Major Offenders Division, which has a unit that deals with animal cruelty cases.

According to the City of Houston’s code of ordinances, it is illegal to house a wild animal, including tigers and lions, in a residence or a business inside the city limits.

In February 2019, police seized a 350-pound Bengal tiger found caged inside the garage of an empty Houston home. The animal’s owner, 24-year-old Brittany Garza, was arrested in May 2019 and charged with misdemeanor animal cruelty for failing to provide water, food, care and shelter for the tiger.

That tiger was sent to live at the Cleveland Amory Black Beauty Ranch, an animal sanctuary in Murchison, Texas.

At the time of her arrest, Garza told ABC station KTRK-TV that she raised the tiger she named “Rajah” from a cub and denied ever being cruel to the animal. “I feel like I lost my child, I think about him everyday,” Garza told KTRK.

In February of this year, a young tiger named Elsa was found in the yard at a Bexar County, Texas, home, wearing a harness when she was rescued in freezing temperatures. She was also sent to the Cleveland Amory Black Beauty Ranch to live.

Lauren Loney, Texas state director for the Humane Society of the United States, issued a statement Monday condemning people who keep exotic animals as pets. She said the recent cases show the need for Congress to pass the Big Cat Public Safety Act, which would ban the possession of tigers and lions as pets.

“Yet another dangerous wild animal was apparently on the loose this weekend in Houston,” Loney said. “This inhumane treatment of animals and the public safety risks created by the surplus of tigers in Texas must end.”