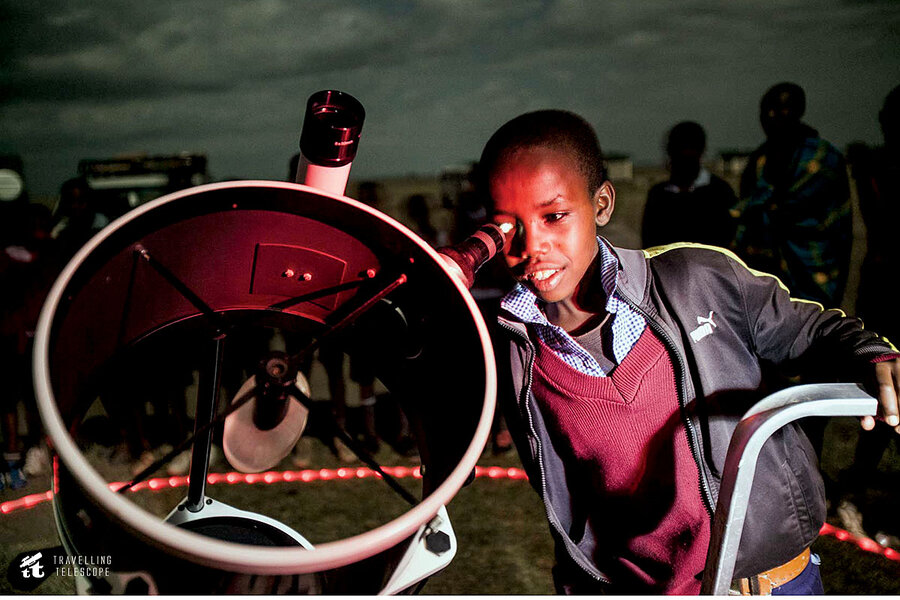 Susan Murabana’s traveling telescope began with a simple revelation: we all have access to the sky.

We all see the same moon. We all look up at the same night sky splattered with stars.

At the same time, she knew, that access wasn’t created equal. Telescopes have been around for 400 years, but most children in Kenya, where Ms. Murabana is from, had never looked through one.

The Travelling Telescope program comes to children with few chances to peer at the stars up close. But the real lessons go beyond science.

She thought she could change that.

In 2014, she and her partner bought a telescope and started carting it around Kenya to show kids what the stars looked like up close. Today, The Travelling Telescope program has reached 200,000 kids, by their count, and won the Europlanet Prize for Public Engagement for its efforts to make the night sky accessible to all. The couple have built a permanent planetarium made from bamboo in their backyard in Nairobi. And during the COVID-19 pandemic, the program has pivoted to teach kids about space and rockets online, offering workshops on 3D modeling and astronomy to local schoolchildren – who have been in and out of classrooms as lockdowns squeeze and loosen.

“It’s never been about these kids becoming astronomers – but it’s about all the different things astronomy can teach,” Ms. Murabana says. “There’s engineering and geology and math, and there’s also just an opportunity to question, to inquire, and to be creative.”

On a recent morning, a dozen kids between the ages of 9 and 16 watched attentively as Ms. Murabana and Chu Owen – her partner in astronomy education and in life – presented, along with their colleague Ronald Wasilwa, how to build a 3D model of a rocket using an online design platform.

“Can I share a fun fact I know about airplanes?” one student interrupts, and then before receiving an answer continues. “They’re like buses in the sky.”

Written in the stars?

Ms. Murabana and Mr. Owen met at a solar eclipse. It was 2013. She was volunteering for other organizations, doing astronomy classes at schools across Kenya.

“I noticed that astronomy was a science that kids got really into,” she says. Everyone wanted to know what was in the sky above them, and it was a way to package lessons about science, math, technology, and design in one.

That year, with a full solar eclipse predicted over northern Kenya, she’d received 5,000 pairs of solar-safe glasses from Astronomers Without Borders so that kids in Turkana, a region in the country’s north, could safely watch the once-in-a-lifetime event. Mr. Owen was there to make a documentary about it.

They fell in love, and then started The Travelling Telescope, taking the telescope around Kenya doing demonstrations and teaching astronomy lessons at schools.

Growing up in Nairobi, Ms. Murabana never saw astronomy as a possible career path – or even a potential hobby. The sky was a background feature in her life, not something to study or explore.

“I always loved math and science, but I wasn’t exposed to astronomy,” she says. She studied economics in college, then worked in marketing. But when she began volunteering with science outreach programs, she saw the way astronomy seemed to make kids from all walks of life light up. Soon, she was teaching kids about space through programs like Hands-On Universe and Universe Awareness, and completing a master’s degree in astronomy herself.

A science for all

Around the world, including in Kenya, astronomy has often been cast as a European science. The famous astronomers through whom many become acquainted with the study of the stars – including Galileo Galilei, Isaac Newton, and Edwin Hubble – are almost all white men. Most constellations take their Western names from Greek and Roman history.

But astronomy is also an African science. The libraries in Timbuktu, Mali, contain tomes on astronomy written between the 13th and 17th centuries. And many African cultures have historically used the stars to chart seasons and directions.

For Ms. Murabana and Mr. Owen, The Travelling Telescope could be the spark that sets off careers for young Kenyans in astronomy – or in geology, engineering, design, or math. Or something else entirely. The goal, they say, is less to create young scientists than to create young people passionate about exploring the world around them.

At Hillcrest International Schools in Nairobi, preparatory head teacher Surbhi Vashisht says the telescope has been a “big hit” with her students, 170 of whom have participated in Travelling Telescope workshops: looking at the stars, building rockets, and virtually exploring the landscape of Mars. “The children enjoy the energy that Sue and Chu bring to the sessions,” she writes in an email.

Stars on the screen

When COVID-19 began to shut down schools in Kenya early last year, Ms. Murabana and Mr. Owen tried to keep their goals alive, even without being able to travel.

The pair took their grant-supported work online, running online quiz nights on space topics and livestreaming solar eclipses on Facebook. And in April 2021, they began offering 3D modeling workshops in partnership with Airbus.

As kids in oversized headsets watched from inside their houses – parents and siblings puttering around in the backgrounds of their Zoom screens – the Traveling Telescope team demonstrated how to use a modeling software called Tinkercad to drag spheres and squares and triangles together to build models of houses, planes, and rockets.

Airbus had donated a 3D printer, Mr. Owen explained, which would go to whichever kid created the best model rocket after the course was finished.

The dozen faces on the screen could hardly compare with the hundreds who often gathered when they took the telescope out to a rural school. And most of those kids, they knew, wouldn’t have the internet access or technology to do a 3D modeling course on Zoom.

Still, the courses were a way to keep reaching out.

As the workshop came to a close one morning, Ms. Murabana waved goodbye to the students.

“Take care, keep safe, mask up, and keep tinkering!” she said, as the screens in front of her flickered off one by one.