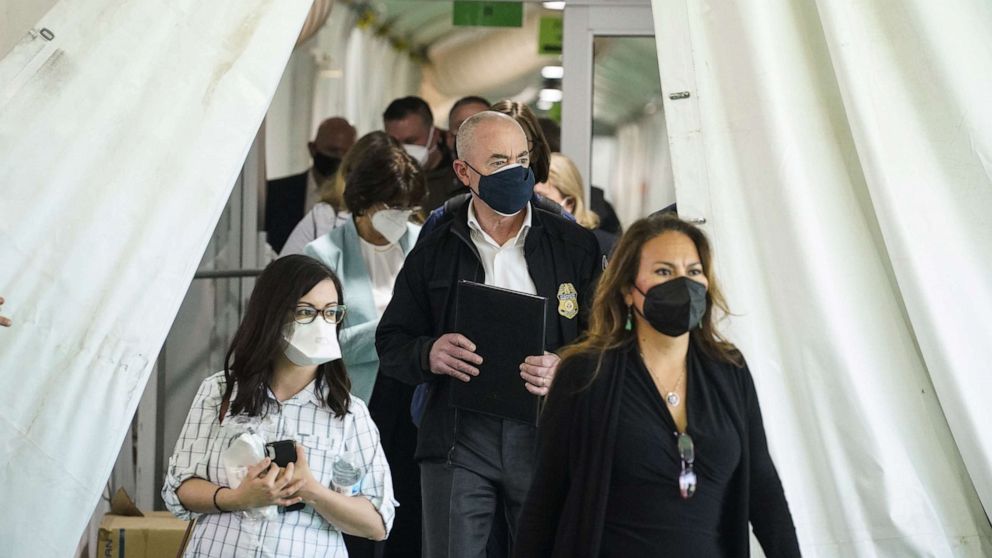 New immigration data shows trends at the border may be changing as the Biden administration attempts to control migration. Amid the encouraging trend, the secretary of homeland security visited a Border Patrol facility in south Texas on Friday.

While the number of Border Patrol enforcement encounters remained elevated last month — but leveled off — the number of unaccompanied minors in USBP custody dropped dramatically. The rate of transfer to better-equipped Health and Human Services facilities also increased.

On Friday, Homeland Security Secretary Alejandro Mayorkas visited what has been one of the most overcrowded Border Patrol facilities in the country. Located in Donna, Texas, the facility at one point housed 4,300 migrants, but is now down to fewer than 800, according to Customs and Border Protection. Still, COVID-19 protocols put the capacity of the facility at 250.

“We have made dramatic progress,” Mayorkas said of the administration’s efforts.

“The president directed an all-of-government approach to meet the challenge, and we certainly have accomplished that,” he said. “The challenge remains, it is not behind us, but our plan of execution is well underway, and the results are compelling.”

Yet, more than 170,000 noncitizens were arrested or detained at the southern border in April, according to current and former officials familiar with the preliminary data.

One source familiar with the CBP data said there were also about 40,000 known “got-aways” or people observed fleeing the border suspected of crossing illegally.

The high numbers, which are nearly the same as the spike seen in the previous month, indicate a continuing challenge for the Biden administration as it has scrambled to expand processing capacity amid an increase of unaccompanied children.

The administration has avoided calling the situation at the border a “crisis,” although the president himself did recently when he was asked about the cap on refugee admissions.

“We’re gonna increase the numbers. The problem was that the refugee part was working on the crisis that ended up on the border with young people and we couldn’t do two things at once. And now we’re going to increase the numbers,” Biden said April 17, when asked about the situation after a round of golf.

The White House later walked back the comment, saying Biden was referring to the economic and environmental crises in Central America that spurred families to cross.

But Republicans have seized on the influx of migrants at the border in recent months, claiming the administration has created more incentives for people to attempt the dangerous journey north. On the left, advocates are concerned about the use of Trump-era border restrictions that limit access to humanitarian protections.

Mayorkas assured the public that the government is moving “as quickly as possible,” to end the use of a public health measure that has largely closed the border to asylum seekers since spring 2020.

Known as “Title 42,” the Biden administration has used this public health authority to immediately turn back or expel most people attempting to cross the border. Critics have pointed to the protocols as the source of the problem rather than a preventative measure.

Asked about the directive, Mayorkas repeated the argument first rolled out during the Trump administration. He stressed that the use of “Title 42” was strictly a public health measure and not an immigration policy decision.

“It is an authority that the Department of Health and Human Services, of which the Center for Disease Control, or CDC, is a part, and it is exercised as a public health authority in the face of a pandemic that is not yet behind us,” he said.

The administration is also facing heat for not moving quickly enough on reunifying families that were separated under the Trump administration’s “zero-tolerance” policy of 2017 and 2018.

“The one thing we did agree on is that we will continue to reunify those where we can as we move forward in those negotiations,” said Michelle Brané, executive director of the Family Reunification Task Force. “So this is the first group, and we have more that are in the process that we will be reviewing. So we hope that in the coming weeks and months, the applications will continue until a larger formal process.”

The Biden administration has so far identified more than 1,000 families that remain separated, Mayorkas and Brané said recently. The fate of most known cases are wrapped up in settlement negotiations as part of litigation from the American Civil Liberties Union started under the Trump administration.

Biden administration officials on Wednesday convened a conference call with reporters to tout the progress made on managing the influx of migrants in recent months.

“What you’re seeing now is the beginning of what it looks like to have a well-managed border,” one official said.

Without providing much of a policy update, the officials noted their own progress in expanding the Department of Health and Human Services’ refugee resettlement capacity to take the pressure off Border Patrol stations that had been housing massive numbers of unaccompanied children.

The implementation of virtual case management, the training of additional case managers and additional efforts to expedite the release of children to families and sponsors resulted in a 20% increase in the number of resettled children last month. The number of children discharged each week increased from 1,400 to over 3,000 children per week over the same period.

The administration has stood up more than a dozen emergency intake sites to increase its capacity by more than 1,600%, one official said. Children are spending about 24 hours on average in border patrol stations, according to the officials.