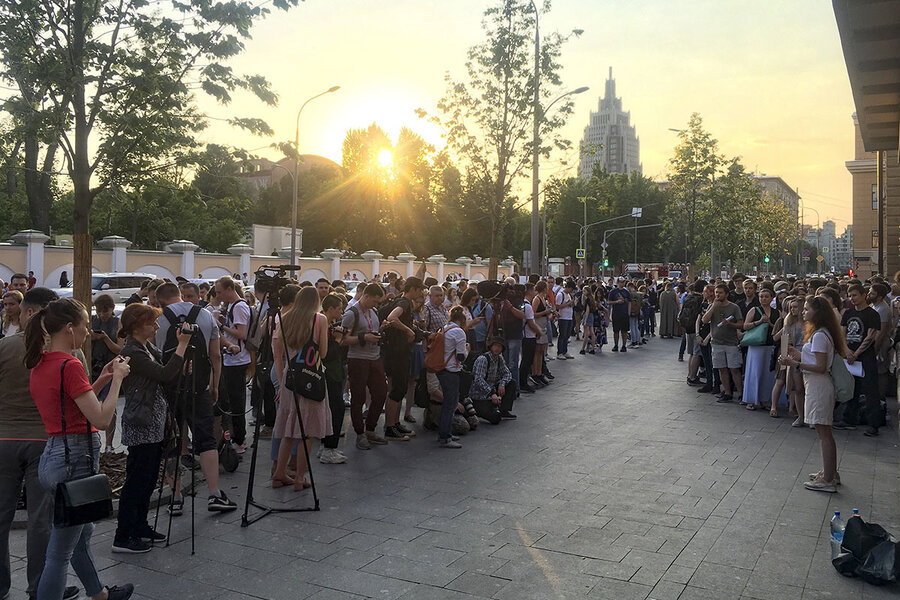 Until last month, news outlet Meduza had been enjoying remarkable success in its coverage of Russia.

Though headquartered beyond the reach of Russian authorities in neighboring Latvia, Meduza has maintained a full staff of reporters and editors in Russia, and focused most of its tough and widely acclaimed reporting on Russian affairs. It financed itself through advertising revenue generated in Russia and fees for “sponsored content” mainly produced for Russian companies, including state corporations. Last year Meduza calculated its regular Russian readership at about 14 million.

But that all changed in April when, without explanation, the Russian Justice Ministry branded Meduza a “foreign agent.” The new official designation immediately sent advertisers running for the hills.

Russia may not be at war with the West, but it is increasingly using a warlike sensibility in its domestic rhetoric and policy. And that’s having a real cost for civil society.

“Our situation now is quite dire,” says Alexey Kovalev, an investigations editor with Meduza. “Before this, Russian companies saw us as a reputable news organization, with responsible content. Already most of our advertisers have fled.”

Meduza is not alone. As U.S.-Russian relations plumb new depths, opposition-minded Russian activists are getting a painful taste of an experience that was very familiar to Soviet-era dissidents: The worse relations got between the USSR and the West, the harder the Kremlin cracked down on its domestic critics.

In recent months, Russian authorities have redrawn the boundaries of acceptable political discourse, and have introduced what many are calling a new paradigm of authoritarian repression, ending the more relaxed early decades of the Putin era. Many activists who had hitherto been officially tolerated have been arrested, and formerly acceptable civil society groups shut down. What most of these new prosecutions have in common is an explicit effort by authorities to link internal dissent with the alleged machinations of the external foe. The list of groups deemed to be “foreign agents,” meaning actors who influence domestic politics while receiving funding from outside sources, has been expanded and now potentially includes almost any independent media and their employees.

While the urge to blame nefarious foreign meddling for internal discord is hardly unique to Russian political culture, it has long been an effective tool wielded by Moscow authorities to socially isolate and demonize domestic opponents by tarring them with enemy associations. But, amid the worst slump in Russia’s relations with the West since the peak of the Cold War, it has become the Kremlin’s go-to explanation for a sweeping crackdown on domestic political opposition.

“It’s not about what Russian leaders think, it’s what they fear,” says Masha Lipman, editor of Counterpoint, a journal of Russian affairs published by George Washington University. “We are witnessing this downward spiral in relations, day by day. In the Kremlin they wonder just how much more hostile could the West become toward Russia? The deeper those animosities become, the tougher Russian authorities are on those people at home that are seen as sympathetic to the West.

“The logic becomes that if you are criticizing the Russian government, then you are acting in the interests of the West, maybe even at their direction,” she says.

The most prominent target so far is imprisoned anti-corruption champion Alexei Navalny, accused of being a tool of Western intelligence services. Many of his key supporters, and even his lawyer, have been arrested in the past couple of weeks. Mr. Navalny’s nationwide network of support groups has dissolved itself in anticipation of being labeled “extremists” under the law and forcibly shut down.

For Meduza, says Mr. Kovalev, the fact that it earned most of its revenue inside Russia, and not from any kind of foreign entities, has been turned against it by the “foreign agent” label. Now any publication on Meduza’s Russian website, or any reposting of it on social media, must be prefaced with a paragraph of large-type text that warns readers that the following content “fulfills the functions of a foreign agent” inside Russia.

“That ‘foreign agent’ warning is 221 characters long; it takes up almost an entire tweet,” he says. “Our Twitter feed, which had 1.3 million subscribers, has been rendered useless,” says Mr. Kovalev. “And it’s clear that this is not about the ‘foreign’ thing at all, but the ‘agent’ thing, implying that we are the puppet of some outside force. Which we are not. Meduza has never taken direction from any government, or other agency, or anyone but our own editorial board.”

Supporters of the law claim that the extension of “foreign agent” labeling to media outlets was in response to a U.S. decision to compel the Kremlin-funded, English-language TV network RT to register as a “foreign agent” three years ago. They also point to what they call anti-Russian steps taken by other governments, such as the recent closure of three allegedly “pro-Russian” TV stations in Ukraine. A recent crackdown on state-funded Russian news outlets in Latvia, where Meduza is based, is another justification often mentioned by pro-Kremlin Russian commentators.

Sergei Markov, a former Kremlin adviser, says that Russian leaders perceive a new level of hostility from the West, particularly the United States, and that means that Russia needs to take preemptive measures to protect itself.

“We have seen false charges against Russian leaders, accusing Putin of trying to poison Navalny, and then Joe Biden calling Putin a ‘killer.’ Russia has information that Western secret services were planning a coup d’etat in Belarus. We know that they are planning to interfere in the upcoming Duma [parliamentary] elections in September,” he says. “This is a whole new level of hostility against Russia. It creates a state of emergency, and it must be responded to.”

Evidence suggests that majorities in Russia accept their government’s explanations and many are prepared to believe that Kremlin opponents like Mr. Navalny are working at the behest of Western interests.

“This method of branding critics as foreign agents works,” says Ms. Lipman. “Of course it depends on age, and social group, but at the end of the day people look at things like the constant sanctions against Russia, and they agree with the claim that the West is seeking to harm us.”

Mr. Kovalev, the Meduza editor, agrees that independent journalists and civil society activists may be in some sense hostages to international tensions. “Of course we would be targeted in this geopolitical game,” he says. “That explains it, but doesn’t justify it.”

He adds, “I have never seen things so bad. More and more people are getting arrested, and maybe it’s just because they haven’t come for me yet, but I don’t feel apocalyptic. Maybe Russian civil society is strong enough to survive. … These are old people in the Kremlin. We are younger; we can outlive them.”