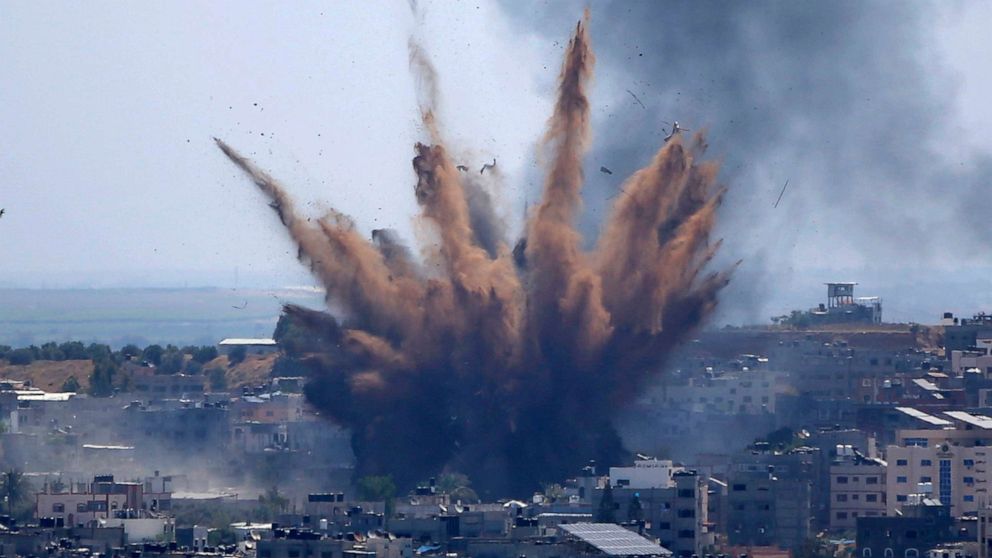 LONDON and CAIRO — Dozens of civilians have been killed while hundreds more have been wounded as the latest round of fighting between Israel’s military and Hamas, the Palestinian militant group ruling the Gaza Strip, entered its fourth straight day.

So far, 103 people, including 27 children and eight women, have been killed in the Gaza Strip since tensions escalated Monday. At least 580 others have been injured, according to the Palestinian Ministry of Health.

The ministry also said that some of the dead who arrived at Dar Al-Shifa Hospital in Gaza City were suspected to have been killed by nerve gas. The ministry did not specify who the victims were, but sources told ABC News they were Hamas fighters who were in a military tunnel.

Meanwhile, a total of seven people, including a soldier and a 6-year-old child, have been killed in Israel. More than 150 others have been wounded, according to the Israel Defense Forces.

Hamas, which gained a majority in the 2006 Palestinian legislative elections and took control of the Gaza Strip in 2007 after battling rival Palestinian forces, began firing a barrage of rockets toward Israeli territory on Monday evening. In response, the Israel Defense Forces unleashed hundreds of airstrikes aimed at what it said were Hamas and other terror targets in the Gaza Strip, a 140-square-mile territory where 2 million Palestinians have lived under a blockade imposed by neighboring Israel and Egypt since Hamas seized power.

The Israel Defense Forces said more than 1,500 rockets have been fired from the Gaza Strip into southern and central Israel since Monday, of which 350 failed and fell on the Palestinian territory. Israel’s sophisticated air defense system, known as the Iron Dome, has also intercepted hundreds of rockets, according to the Israel Defense Forces.

The Israeli airstrikes have killed at least 25 combatants in the Gaza Strip, most of which are affiliated with Hamas but also with Islamic Jihad, a smaller Palestinian militant group. Several senior commanders in Hamas’ “general staff” were also “eliminated,” according to the Israel Defense Forces.

Abu Obeida, a spokesperson for Hamas’ military wing, said in a video statement that the decision to attack Israeli cities was “easier for us than drinking water.” Meanwhile, Israeli Prime Minister Benjamin Netanyahu has vowed to continue retaliatory attacks.

It’s the worst outbreak of violence between Israeli forces and Hamas since a 50-day war in the summer of 2014.

As both sides continue to trade airstrikes and rockets with no signs of backing down, violence between Arabs and Jews has broken out on the streets of Israel. Authorities responded to “wide-scale riots” in various Israeli cities on Wednesday night, according to Israel Police spokesperson Micky Rosenfield. A dozen officers were injured while responding to the incidents and hundreds of people were arrested, Rosenfield said.

Authorities imposed a curfew in Lod, where buildings and cars were set ablaze on Wednesday night. A young Arab resident was shot and killed there on Monday night amid clashes between Arab and Jewish mobs, according to Rosenfield.

An attack on an Arab man near Tel Aviv was televised live by Israel’s public broadcaster late Wednesday. The shocking footage shows a mob dragging the man out of his car and beating him until he lay motionless.

“To the citizens of Israel I say that I do not care if your blood is boiling. You cannot take the law into your own hands,” he added. “You cannot grab an ordinary Arab citizen and try to lynch him — just as we cannot watch Arab citizens do this to Jewish citizens.”

The escalating violence in Israel has prompted at least three U.S. airlines — American Airlines, Delta Air Lines and United Airlines — to cancel all flights to and from the Middle Eastern country, telling ABC News they are monitoring the situation and will continue to reevaluate.

Hamas warned international airlines from flying to Israel, and said they will target airports.

U.S. President Joe Biden had a telephone call with Netanyahu on Wednesday in which he “condemned the rocket attacks by Hamas and other terrorist groups” and “conveyed his unwavering support for Israel’s security,” according to a press release.

“My expectation and hope is that this will be closing down sooner than later,” Biden told ABC News after speaking with Netanyahu. “But Israel has the right to defend itself when you have thousands of rockets flying into your territory.”

U.S. Secretary of State Antony Blinken told reporters Wednesday that he was deploying Hady Amr, the deputy assistant secretary of state for Israel and Palestinian affairs, to meet with leaders from both sides in the coming days. Amr was expected to arrive in the Middle East on Thursday.

Blinken again condemned the rocket attacks by Hamas and repeatedly backed Israel’s right to defend itself.

“There is, first, a very clear and absolute distinction between a terrorist organization, Hamas, that is indiscriminately raining down rockets, in fact, targeting civilians, and Israel’s response, defending itself,” Blinken told reporters.

But he also noted that Palestinian children have been killed in the Israeli airstrikes, saying, “Israel has an extra burden in trying to do everything they possibly can to avoid civilian casualties.”

“The Palestinian people have the right to safety and security and we have to, I think, all work in that direction,” he added.

Despite talking to Netanyahu, Biden has not spoken to Palestinian President Mahmoud Abbas. White House press secretary Jen Psaki defended the lack of contact by Biden on Thursday, saying Blinken had spoken to Abbas.

“The secretary of state is an incredibly high ranking member of the administration,” she said. “Fourth in line for the presidency, if I’m getting that correct. He’s very close to President Biden, and certainly that sends a clear message about the importance of communicating with all parties in the region.”

Israel and the United States both consider Hamas a terrorist organization. The U.S. government has voiced support for a two-state solution to the Israeli-Palestinian conflict, which would create an independent Israel and Palestine.

Conflict between Israelis and Palestinians has raged on for decades, but tensions have heightened in recent weeks over a long-running legal battle on the potential expulsion of Palestinians from their Jerusalem homes.

Hundreds of thousands of Palestinians fled or were displaced from their homes during a war that accompanied Israel’s creation in 1948. Some Palestinian refugees were rehoused in east Jerusalem by the Jordanian government in the 1950s — before Israel captured the city from Jordan during the 1967 war. Now, several Palestinian families are facing possible eviction from land that Jewish settlers claim they lost to Arabs during the 1948 war. Israeli law allows citizens to take back such land but it does not allow Palestinians to do the same.

On Sunday, the Israeli Supreme Court decided to delay a ruling on the case by up to 30 days after the attorney general requested more time to review it.

The recent fighting comes as Muslims mark Eid al-Fitr, the end of of Islam’s holy month of Ramadan. The religious holiday is typically a festive time but the celebrations were much more somber this year. Thousands of Palestinian Muslims gathered at the al-Aqsa mosque in east Jerusalem early Thursday to take part in communal Eid prayers. In the Gaza Strip, Hamas has urged people to pray inside their homes or the nearest mosques rather than out in the open.

“The explosions, airstrikes are not stopping,” Suhair Zakkout, a spokesperson for the International Committee of the Red Cross in Gaza City, told ABC News on Wednesday. “And instead of now celebrating Eid by buying new clothes or buying toys for their children, people rush to the hospital and live their days in pain to lose their loved ones.”