Greetings to all lovers of homemade products and those who just looked at the site in search of interesting ideas for implementation. Once I already told you how to make a convenient stand for a drill from multilayer plywood and thereby turn this tool into a drilling machine. In continuation of the topic, I want to bring to your attention a version of a vice made of bars. With their help, you can reliably fix the part in which you need to drill an even and neat hole. Also, such a vice will protect your hands. I think this homemade product will come in handy for you. As I said, the main material used by the author is wooden blocks. What else was needed, I will list below. Also at the end of the article I will fix a video in which he demonstrates the manufacturing process. By the way, if you carefully watch the video, these vices are just the same when drilling with a drill fixed in a homemade rack.

* timber of various sections (you can choose at your discretion),
* a long bolt and two wide nuts for it,
* glue for wood,
* wood screws,
* linseed oil (you can use wood stain or wood preservative).

The author began by preparing all the parts necessary for manufacturing. All of them are shown in the photo below. 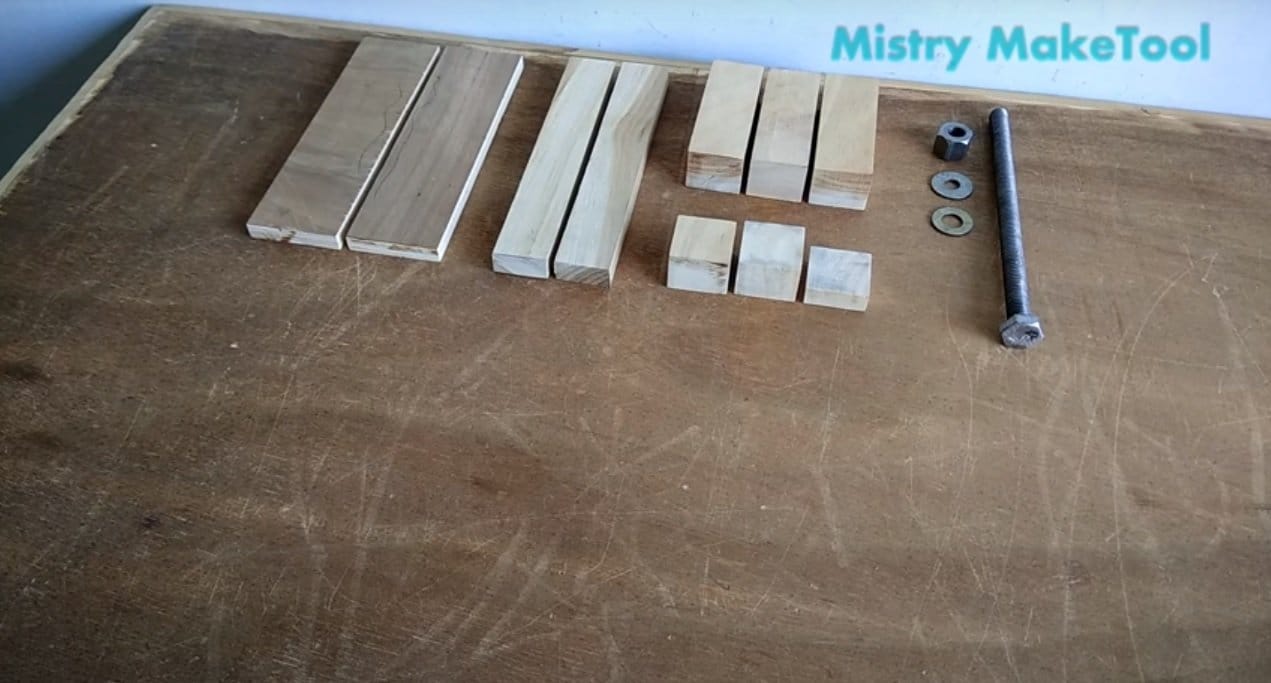 Next, the author takes the largest parts, one rail and a bar. He greases the workpieces with glue on one side and connects them. Clamps in a vice and fixes with a clamp. Drills holes from the side that will look down and twist self-tapping screws in them.
In the same way connects the second pair of the longest parts. The two parts of the base are ready. 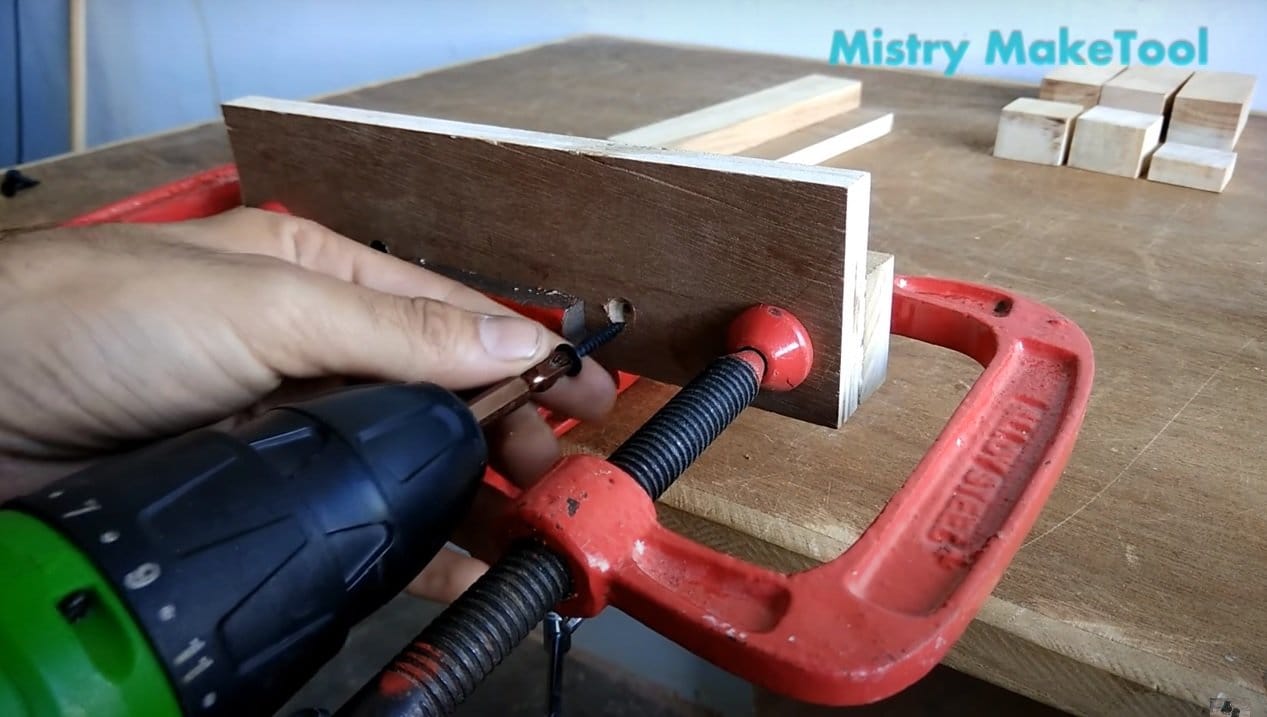 At this stage, the author finally assembles the base. To do this, he uses two blanks in the form of cubes. He tries them on to the sidewalls. Then he lubricates the desired edges of each part with glue, sets in place and fixes with glue. The main frame is ready. 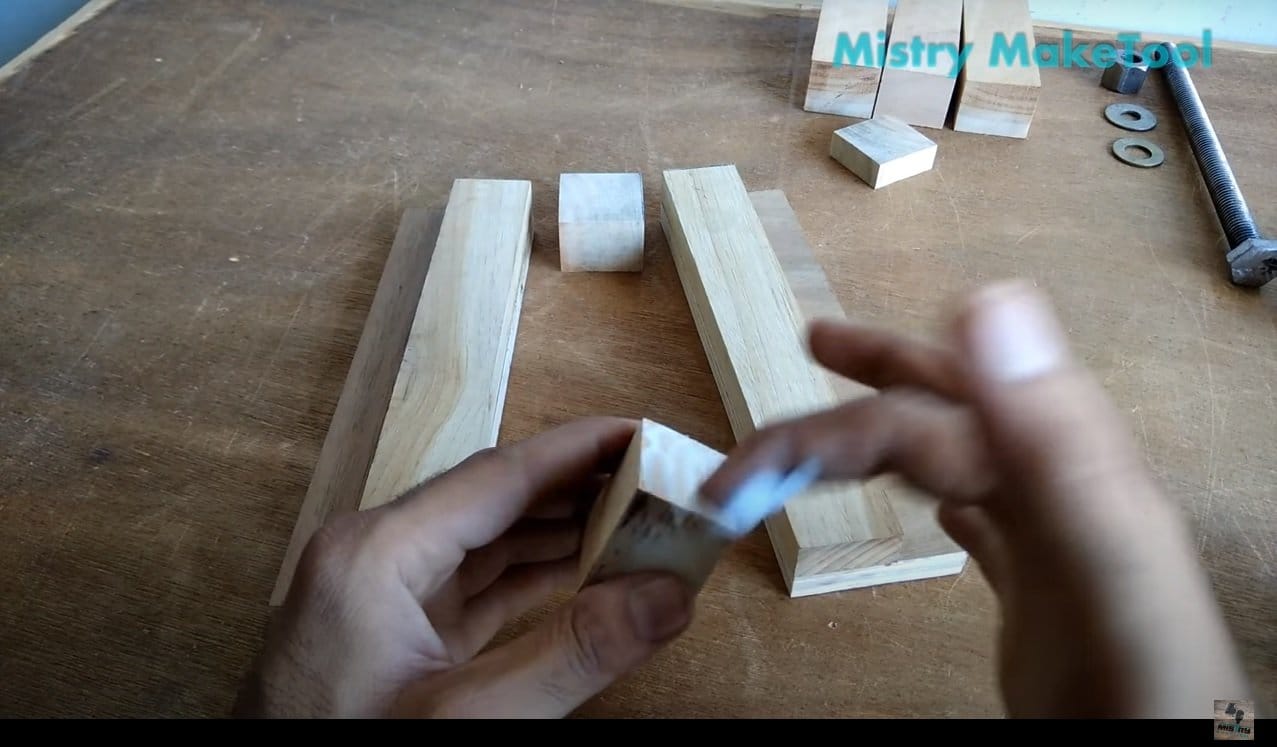 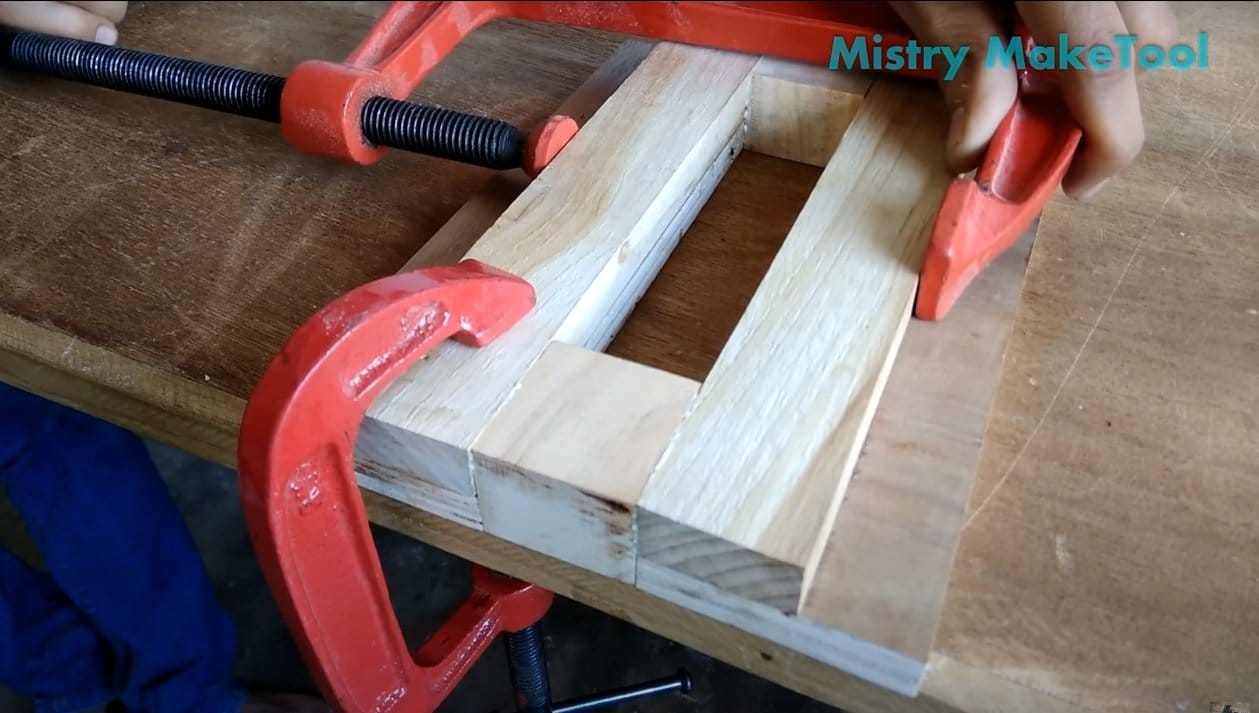 Now let's move on to the upper working part – the main one. It consists of three bars and a screw. First, the author takes the first block and one wide nut, tries it on to one of the edges and traces it along the contour. Then, at the mark, he drills a through hole with a feather drill of the required diameter. Then, using a clamp, he presses the nut into it. Tightens the screw to check if the nut turns. Then he fixes it with superglue. After the edge of the finished part, it grinds. 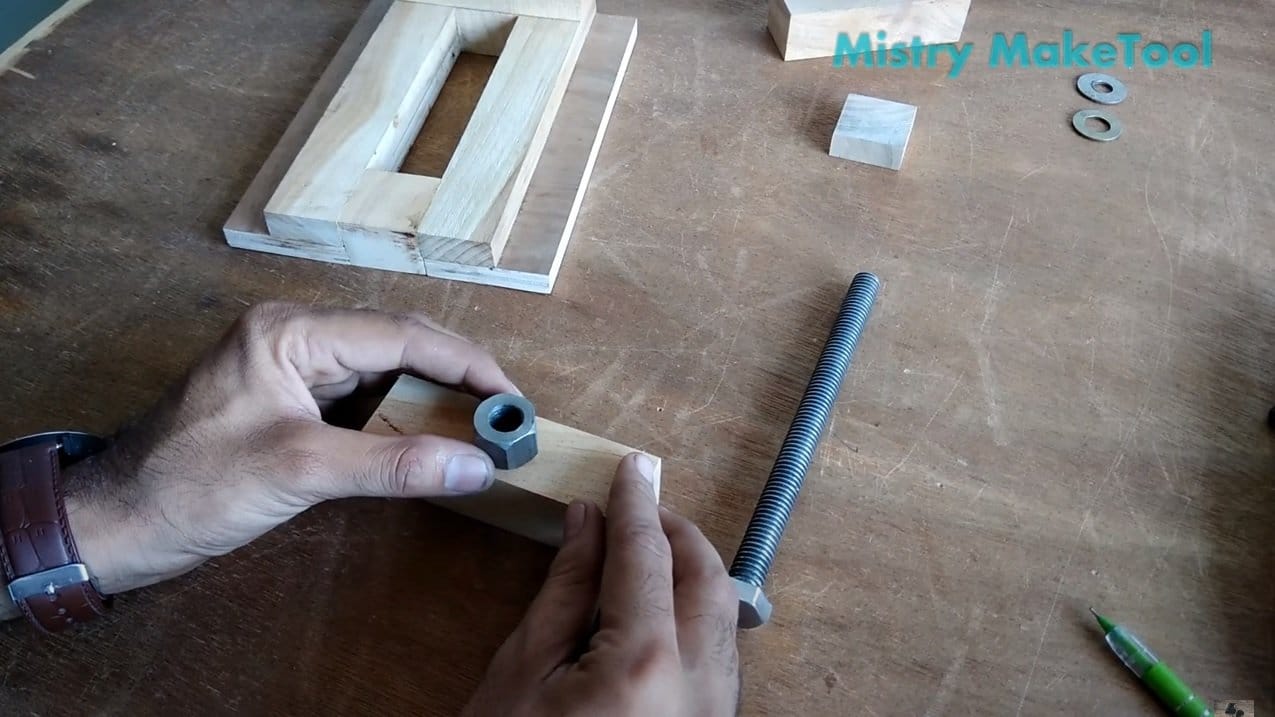 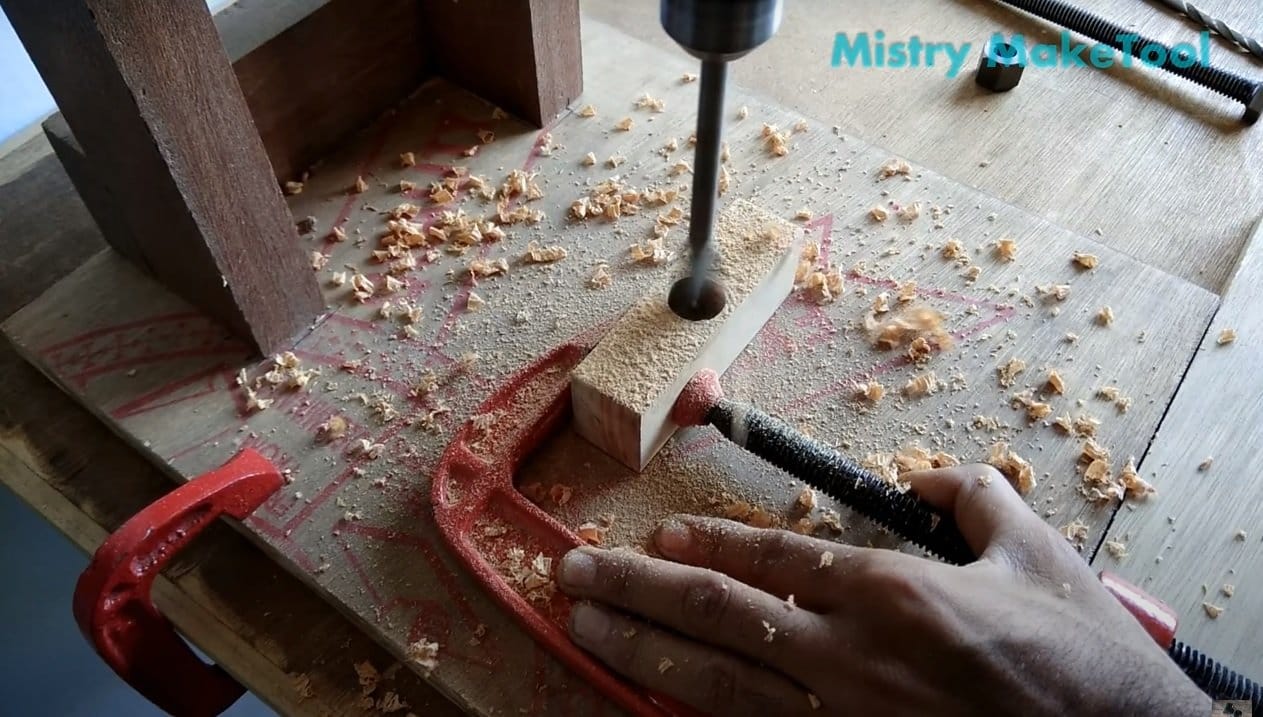 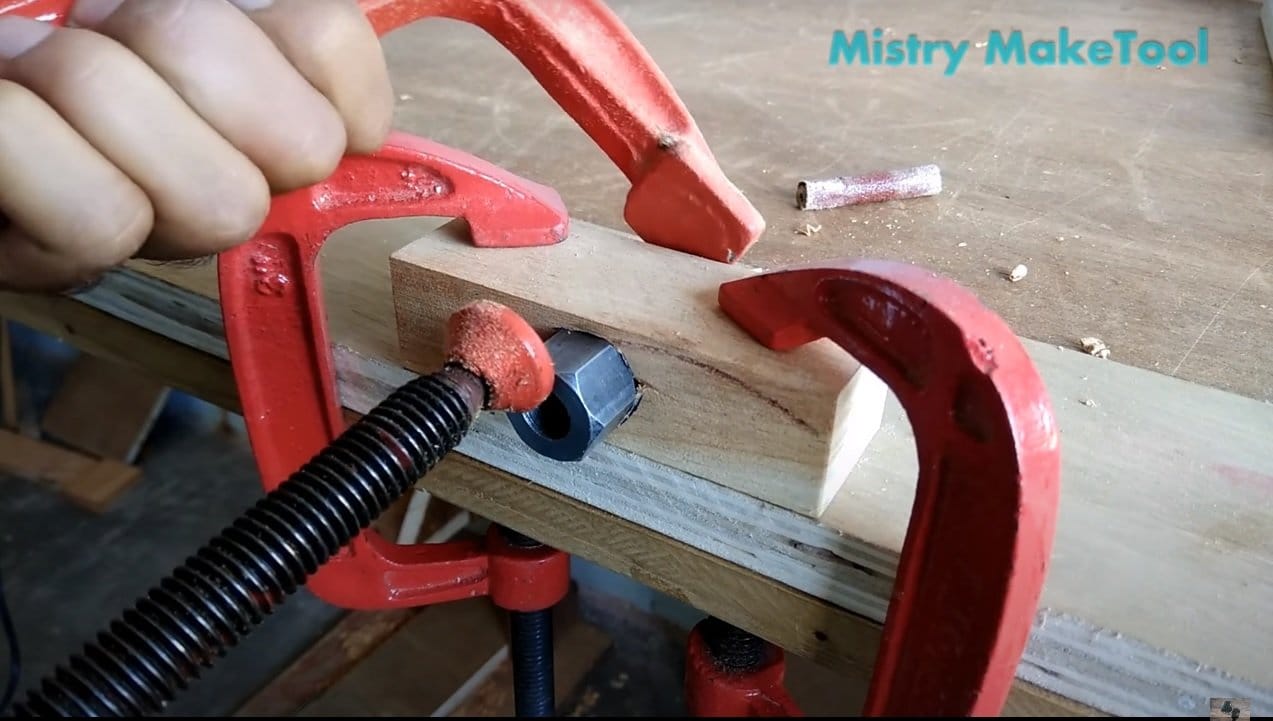 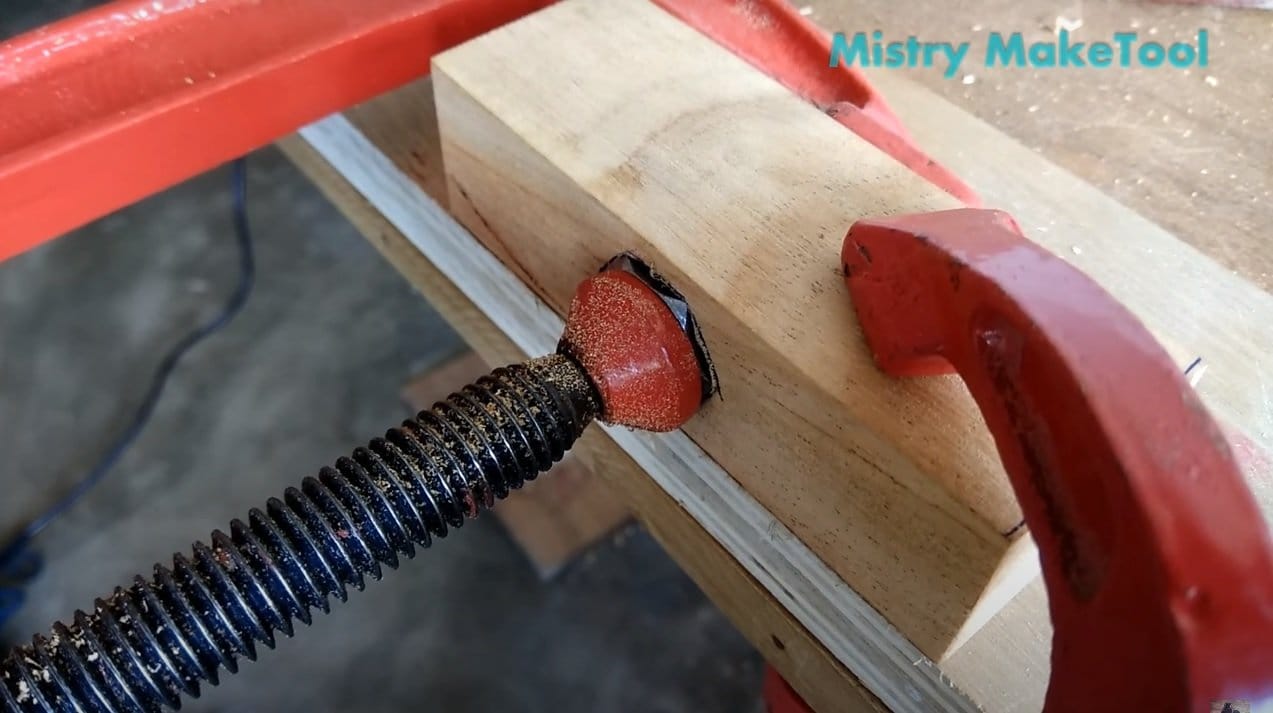 Next, the author proceeds to the manufacture of the second part, which will be movable. In one of its faces, he drills a blind hole along the diameter of the bolt, with a depth of about 1-1.5 cm. For this, he took a part with a pressed-in nut, attached the second to it and put a mark through the hole with a marker.
Now you need to think about how to fix the bolt in the hole so that it does not jump out and at the same time rotates freely in it. For this, the author required a wide washer. He did the following. I installed the bolt into the hole all the way and put a mark on the thread with a marker on the thread. I made a groove along it with a grinder around the entire circumference. I put four marks on the washer and drilled holes along them, then cut it into two parts so that each had two holes.

Now you need to fix and connect the prepared parts. The author smeared the block with the nut on the right side with glue, fixed the connection with a clamp, drilled holes from the bottom and screwed the screws into them. Then I glued a small square with a width equal to the distance between the sidewalls to a bar with a hole. It is necessary so that when moving the bar does not shift to the sides and does not warp. At the end, he attached a block to a bolt. To do this, I installed its edges in the hole up to the groove and screwed the two halves of the washer with small screws. Before installing the bolt, he screwed a wide nut onto it all the way into the head. I drilled a through hole in it and installed a thin long bolt in it. Thanks to him, the screw (bolt) will be conveniently rotated. 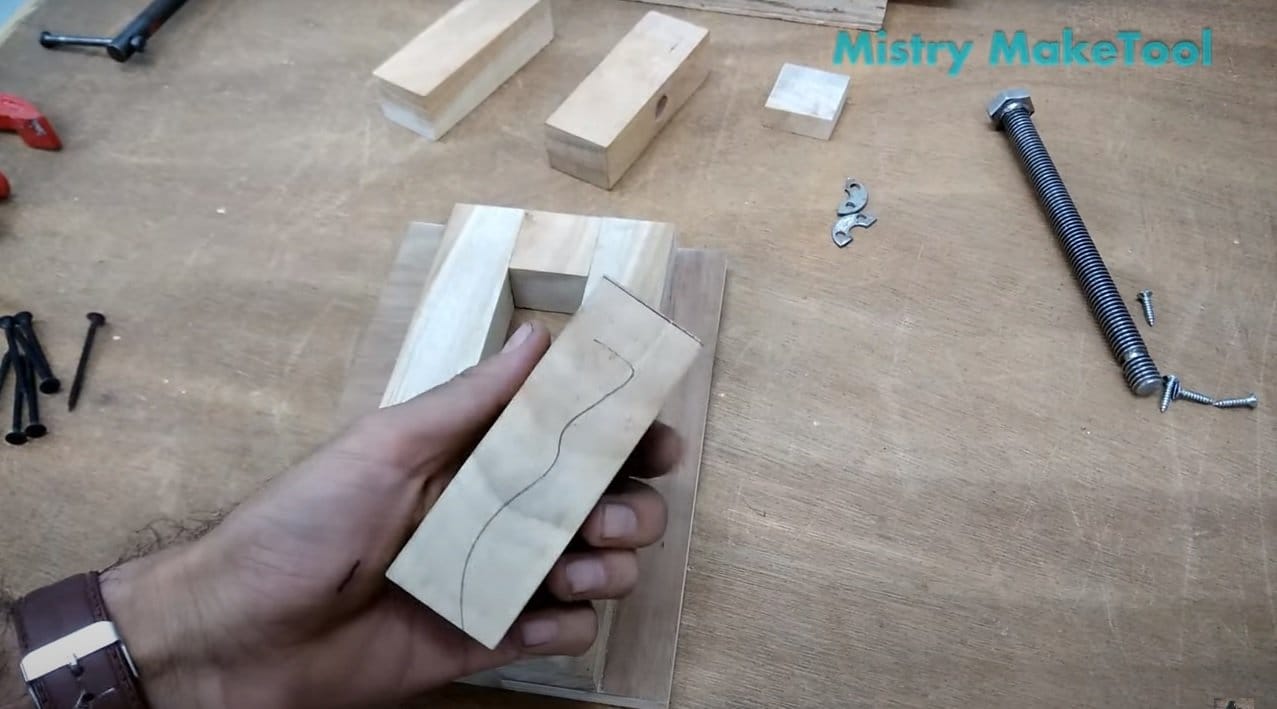 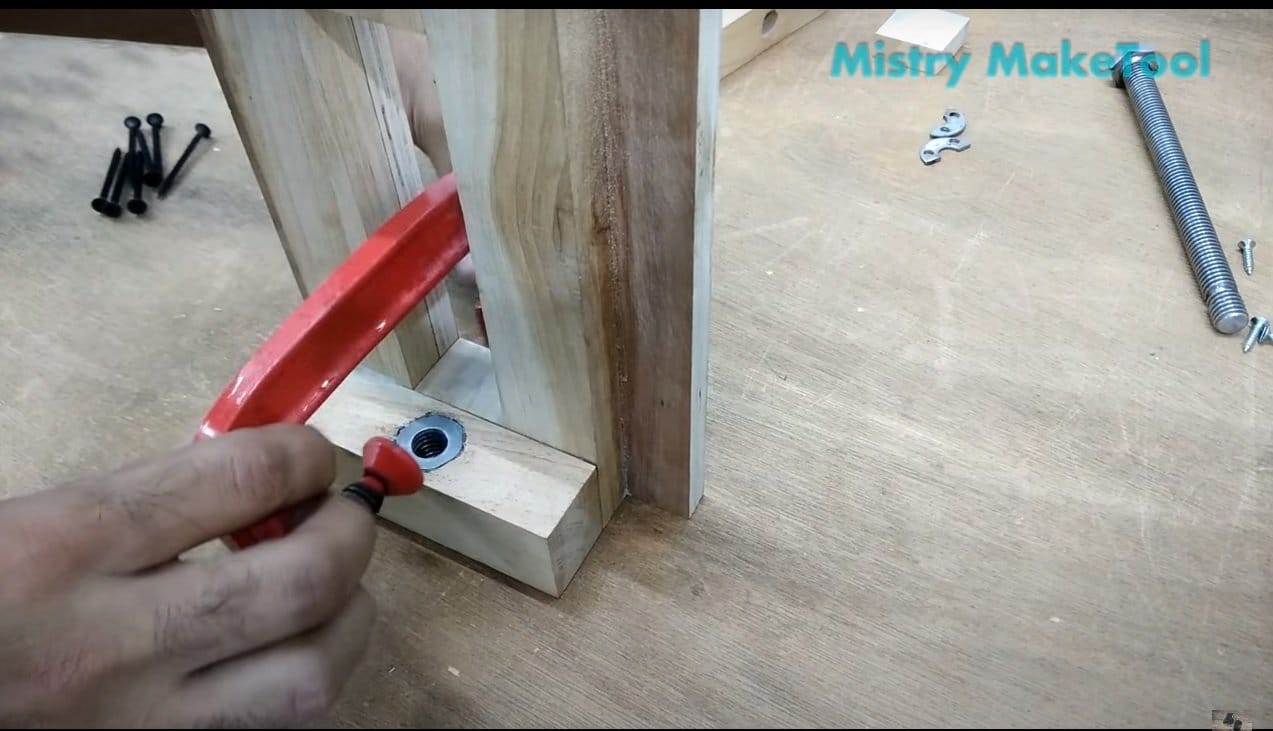 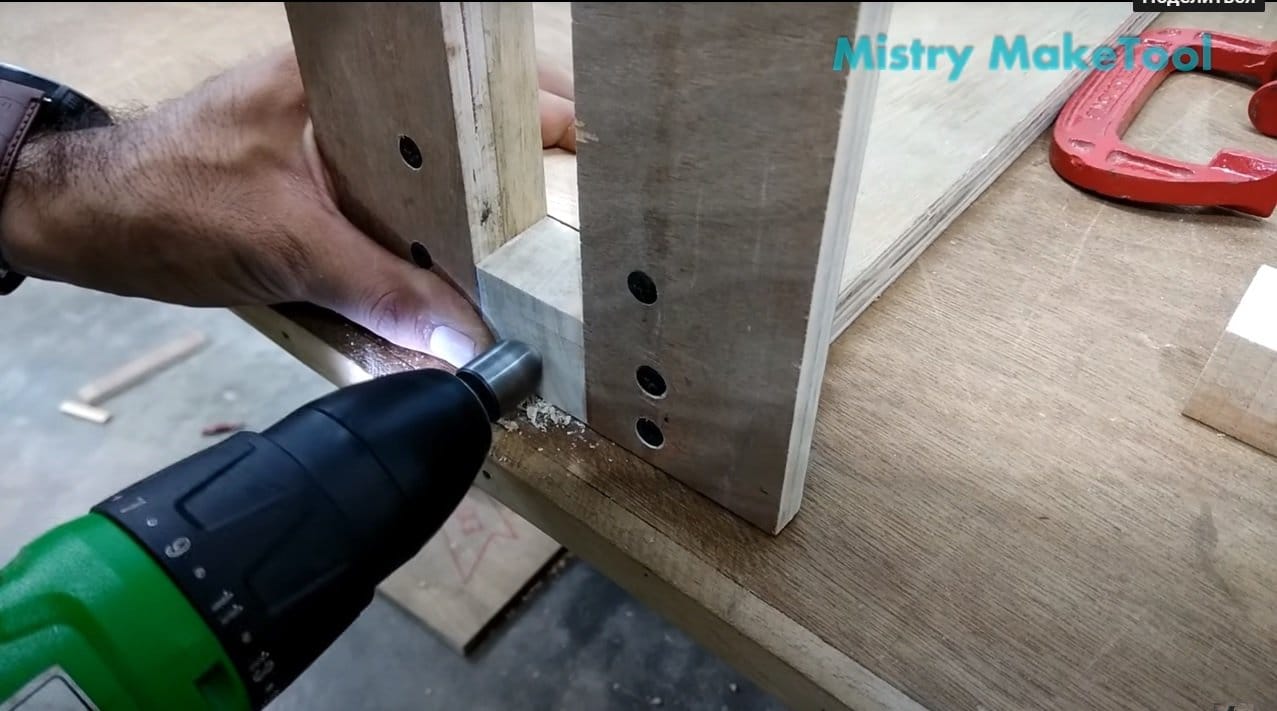 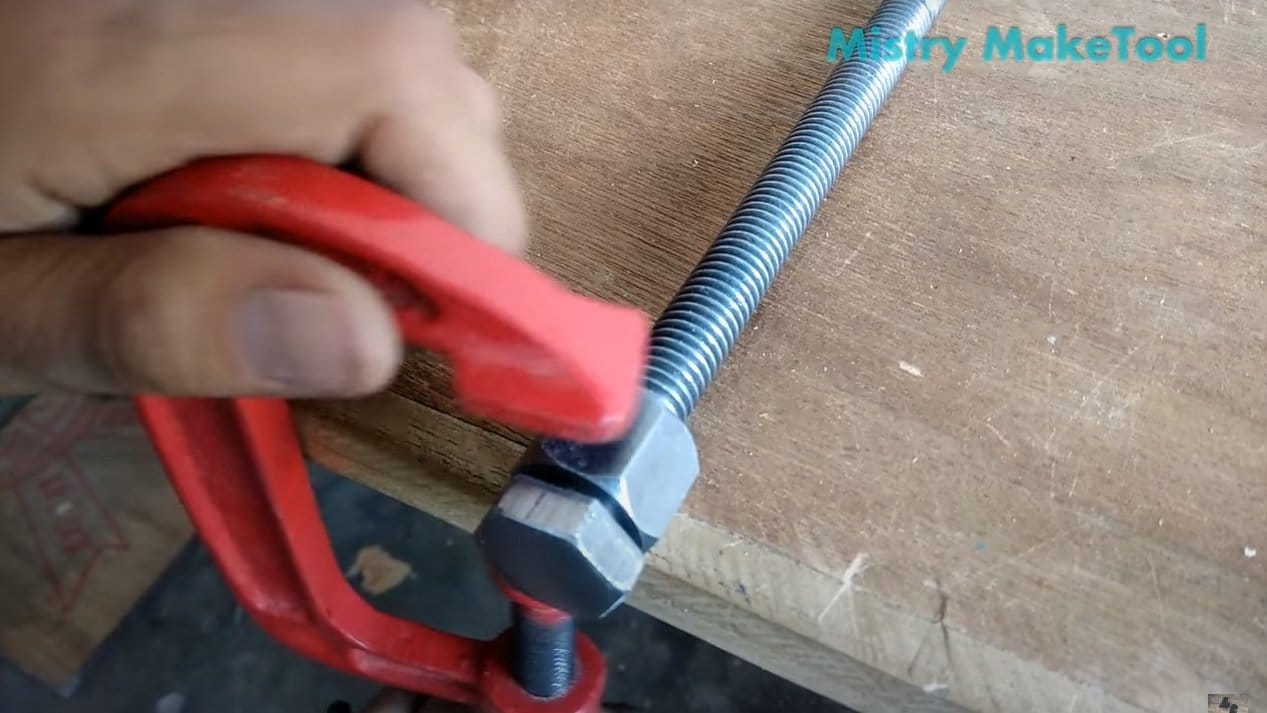 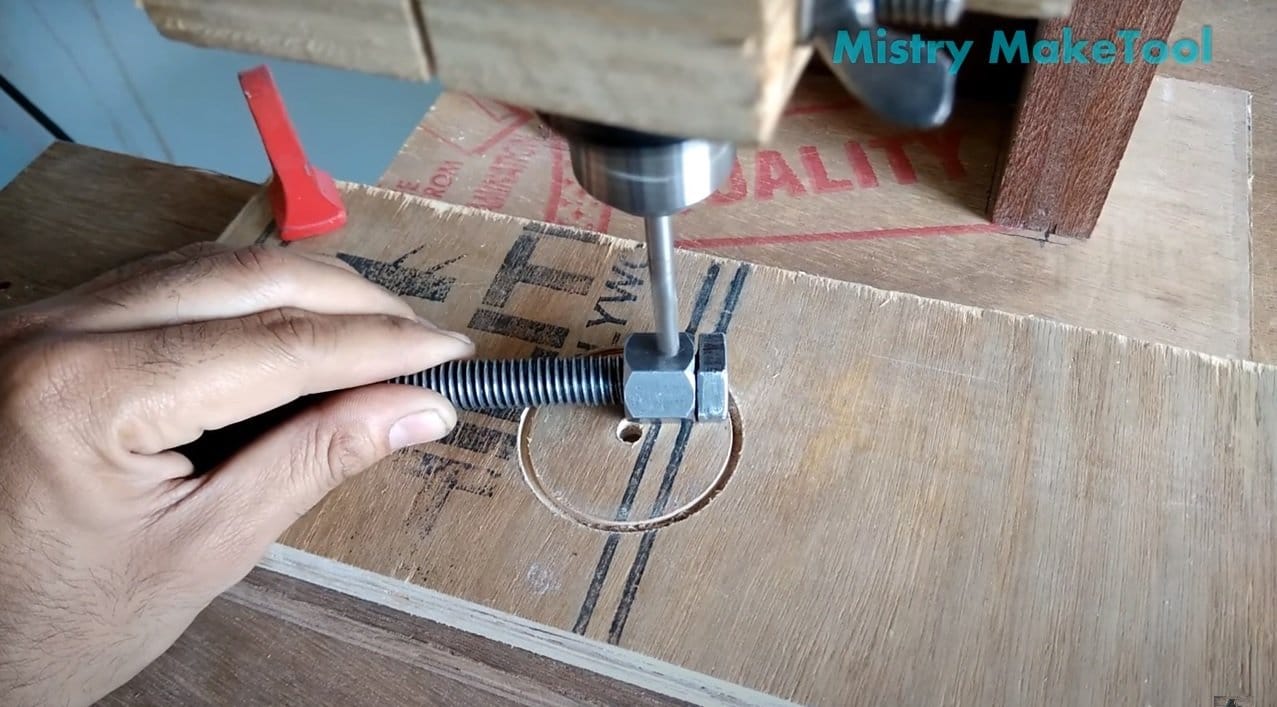 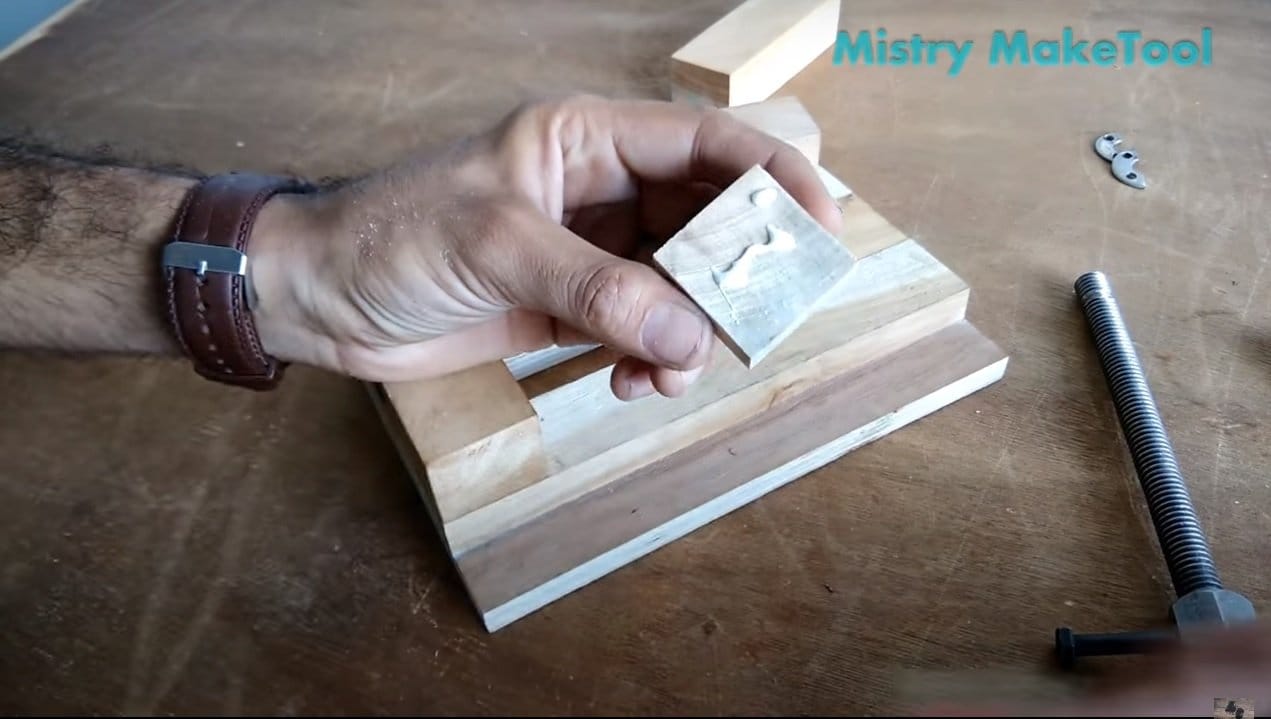 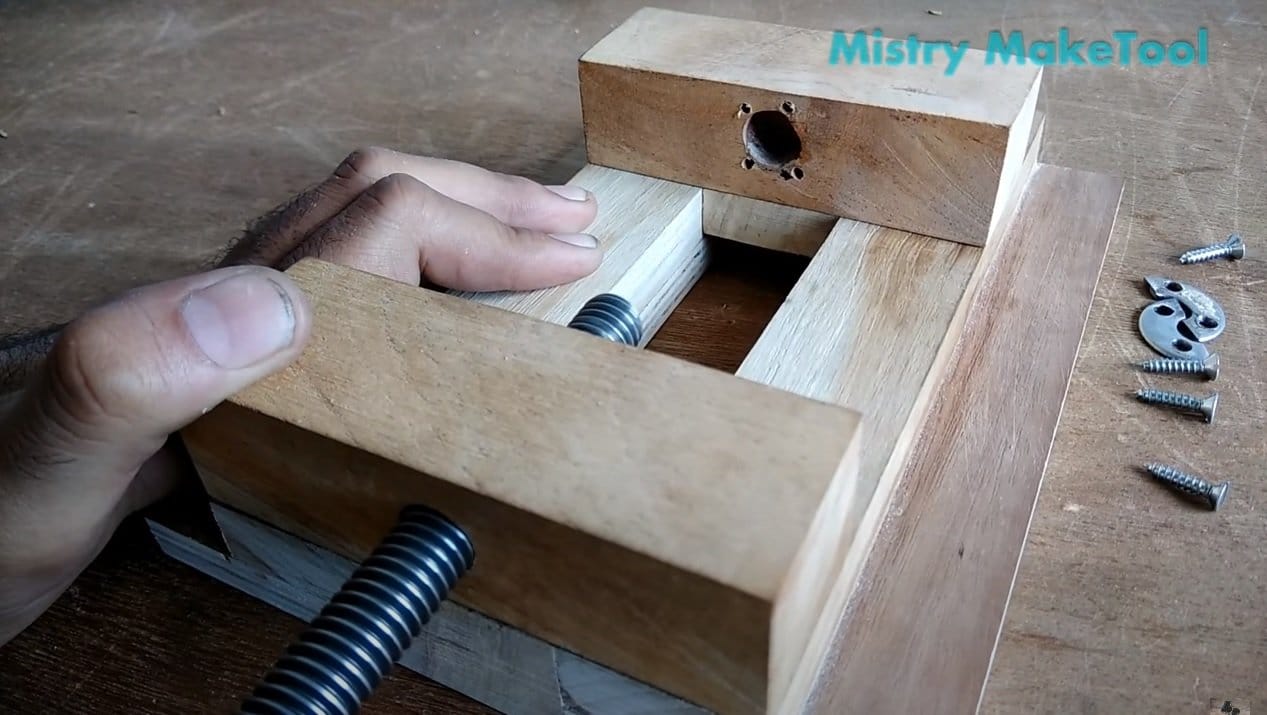 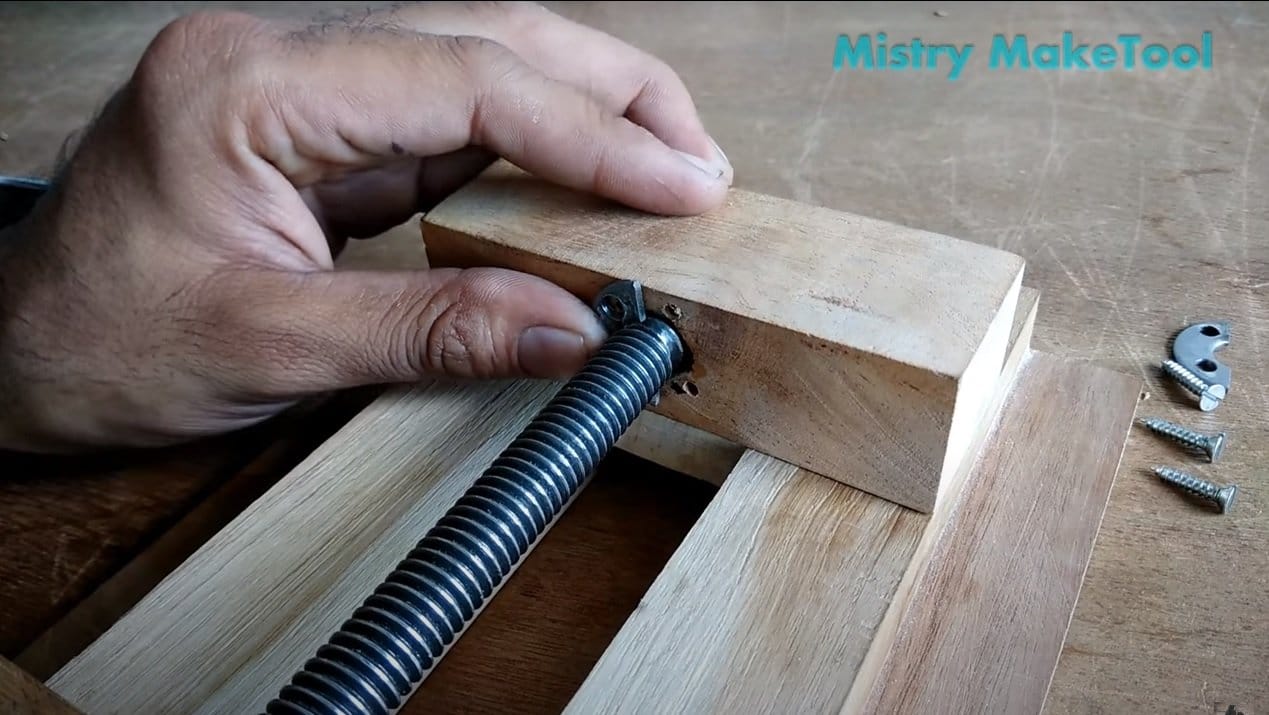 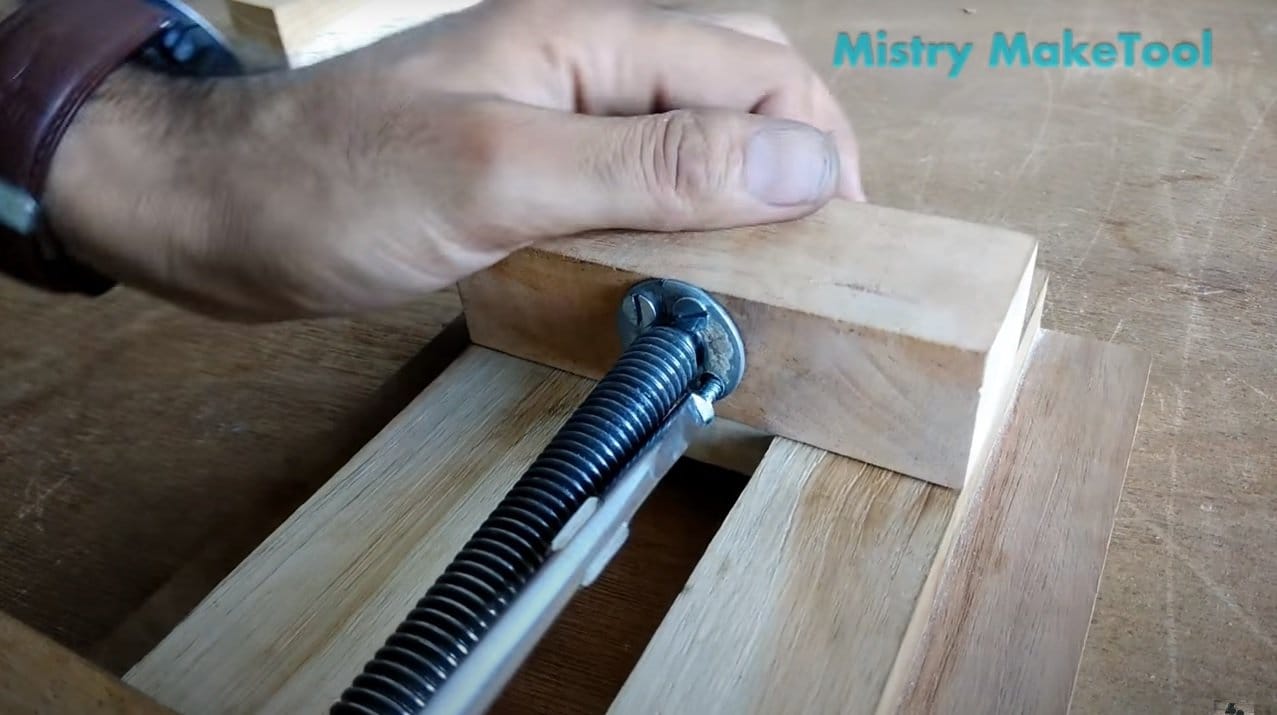 This is the final stage of the build. On it, the author installed a third block on the other side. Oh, not mobile. The workpiece will be pressed against it. Here he does everything the same as with the first one. Coats with glue, fixes with clamps, fixes with self-tapping screws. 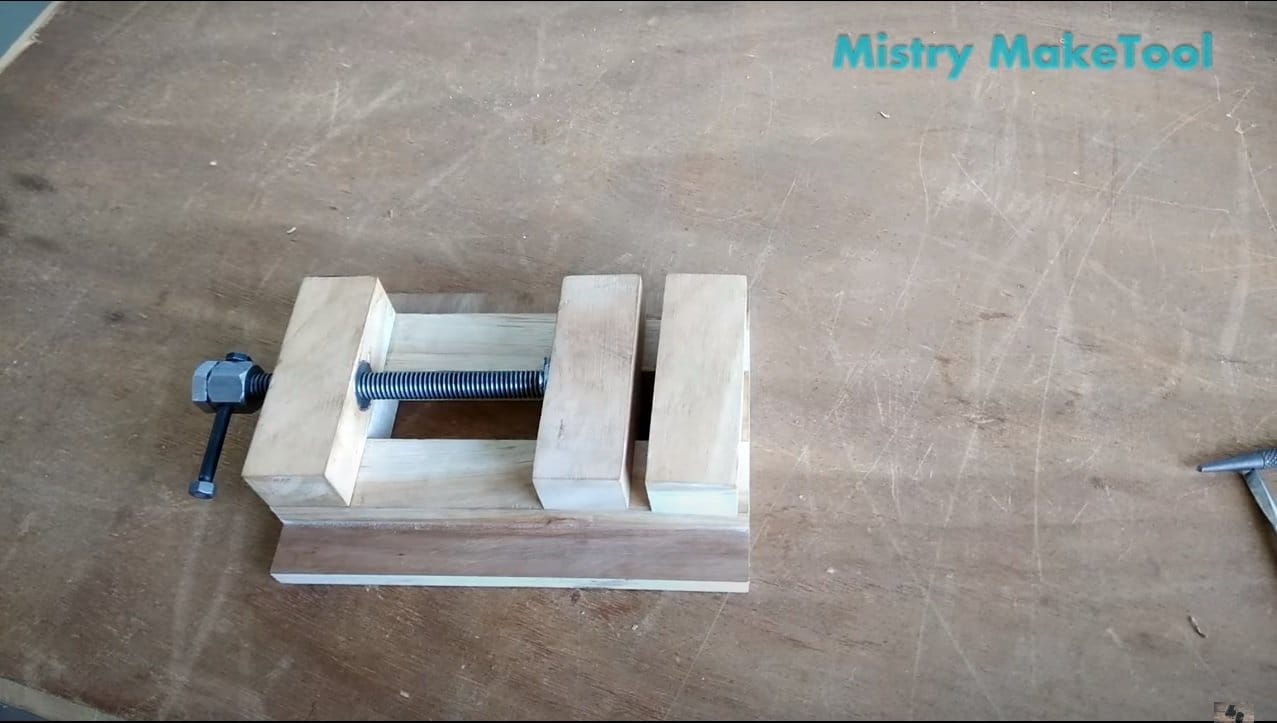 The author screwed in all the screws from below so that their hats would not spoil the view from above. 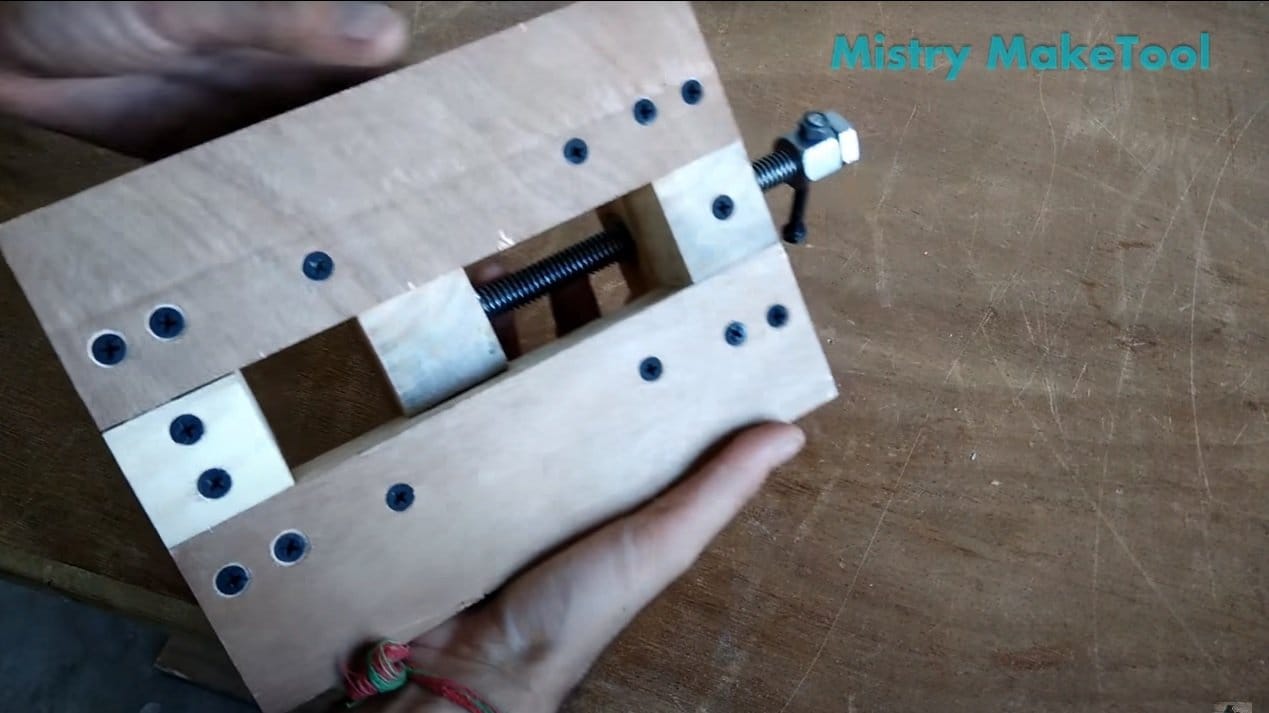 At the final stage, the author covers the finished vise on the outer surfaces with linseed oil, it not only protects the wood, but also emphasizes the pattern and gives the finished product. Then he tests the ready-made grips in business. Everything is fine, they are doing their job. 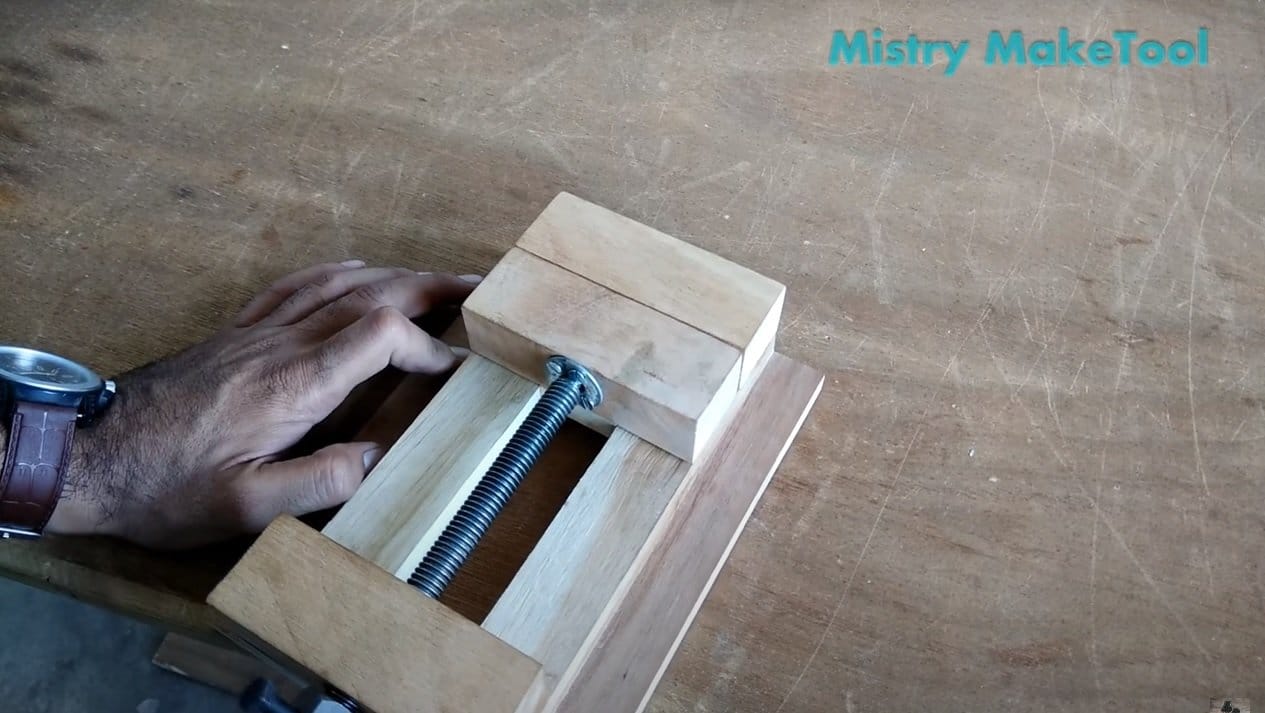 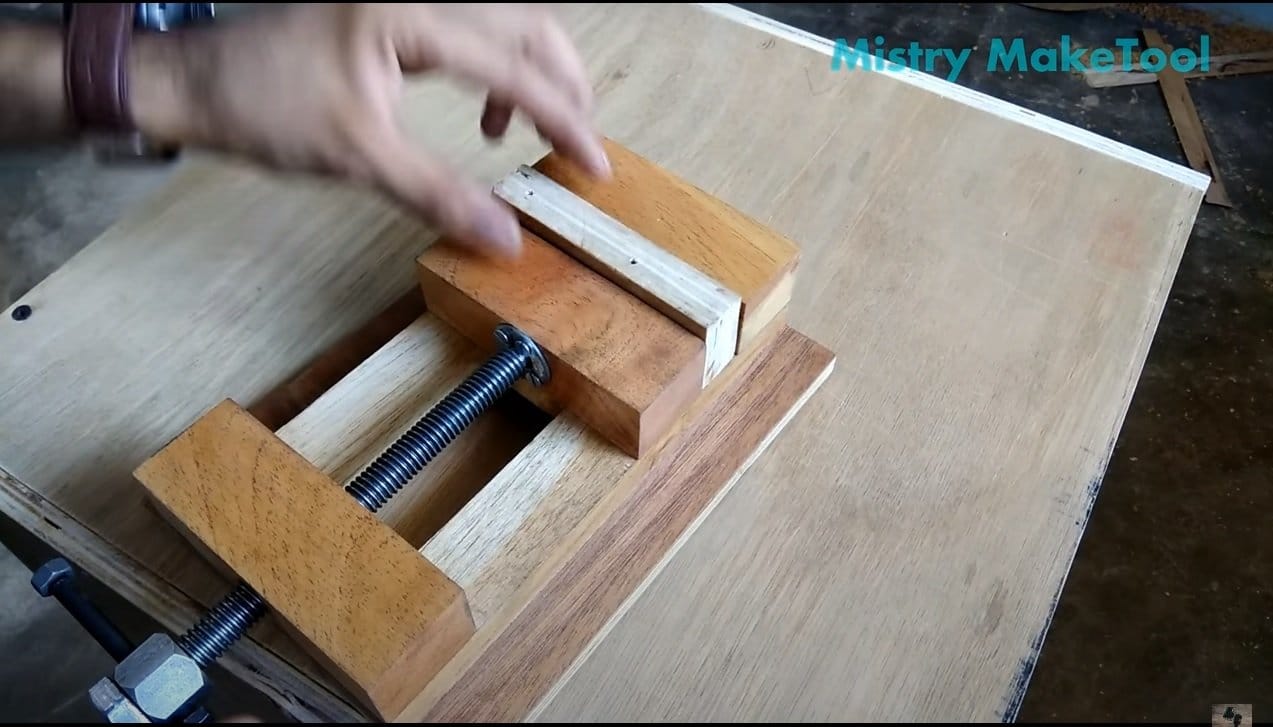 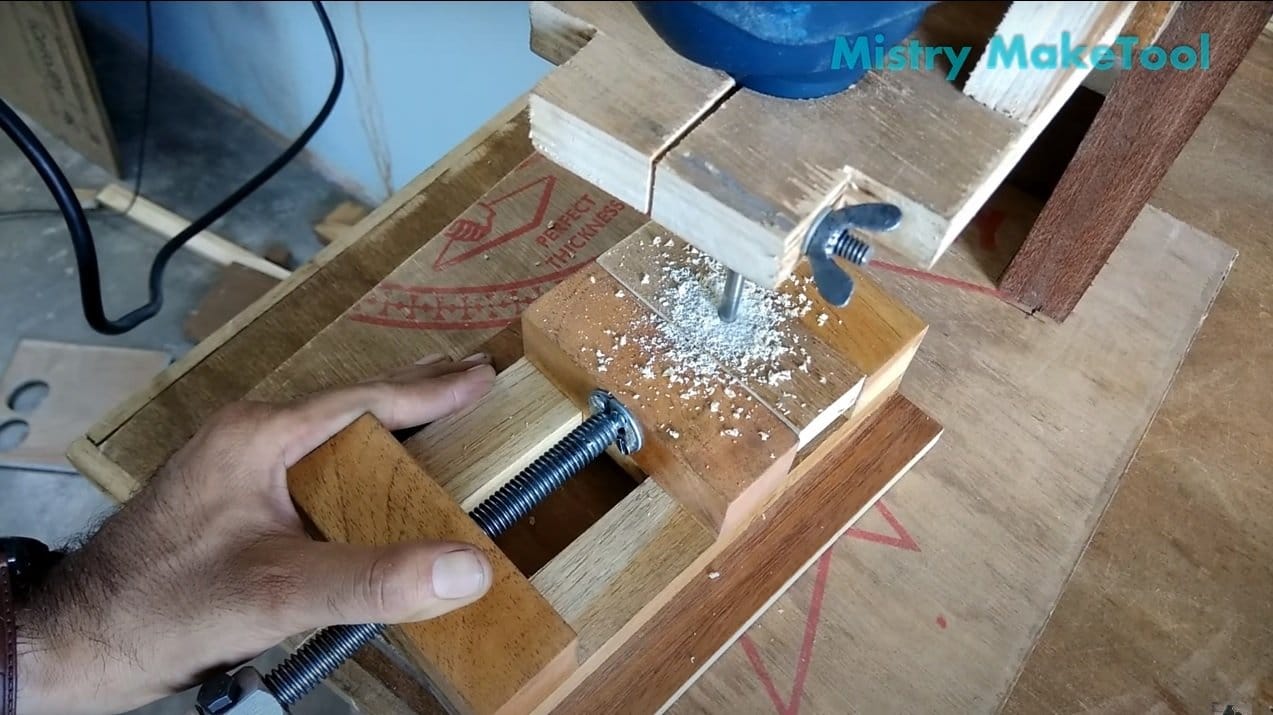 That's all, below, as promised by the video from the author.


Thank you all for your attention, if you liked the idea, support it with a like. Good luck to everyone and see you again at Samodelkin's !!!!
Source:

How to make a belt sander for a grinder (pipe grinder)