Good day. I would like to bring to your attention an option for further modernization of the Dremel universal drill stand for MFI, previously described in previous articles. Dremel stand 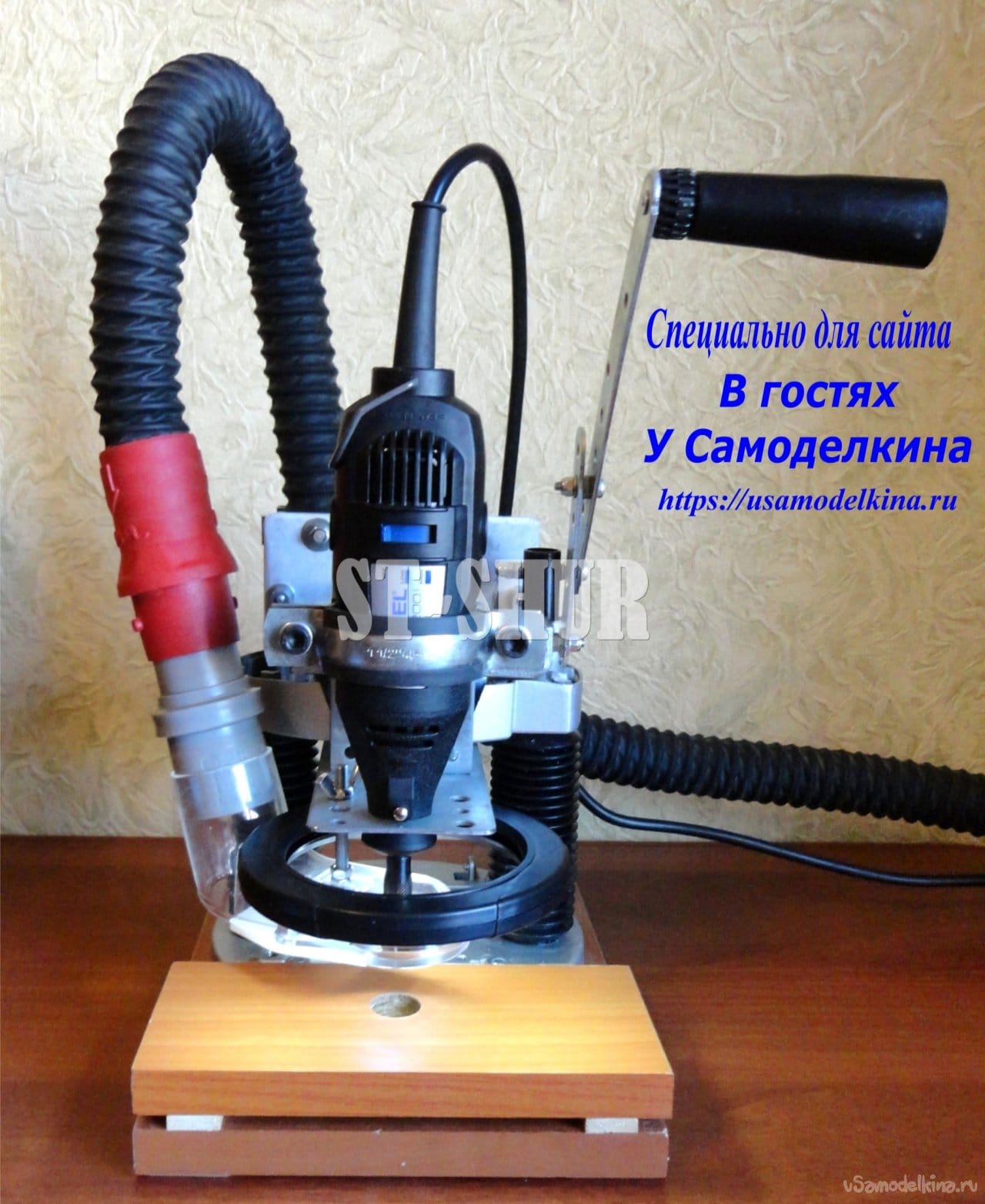 Because In the design (after the previous revision), the possibility of convenient work with cutters, emery wheels, cones, etc. was added, and when working with such MFI equipment, a significant amount of sawdust is formed, then it became necessary to add elements to the design to connect a device for their removal.
Idea consisted in the manufacture of a sawdust intake from the available parts, with minimal revision. I also decided to experiment with using a local illumination device, as which I tried to use the finished product.
In the finalization of the design was used:
– plastic clamp for pipes with a diameter of 32mm
– suction adapter sawdust for the “Bosch POF 1200 AE” router
– a piece of plastic 3mm thick
– a piece of plastic coupling for pipes with a diameter of 32mm
– Magnifying glass with illumination from the store “FIXprice”
– M5 fasteners
From tools used:
– MFI “Dremel”
– screwdriver
– drill 5mm
– countersink
– screwdriver
– clerical knife
When implementing this idea, only three holes with a diameter of 5mm were drilled. And with a clerical knife, two small parts are cut out of soft plastic with a thickness of 3mm. An adapter for suction of sawdust from a Bosch POF 1200 AE hand mill was used as a sawdust intake. 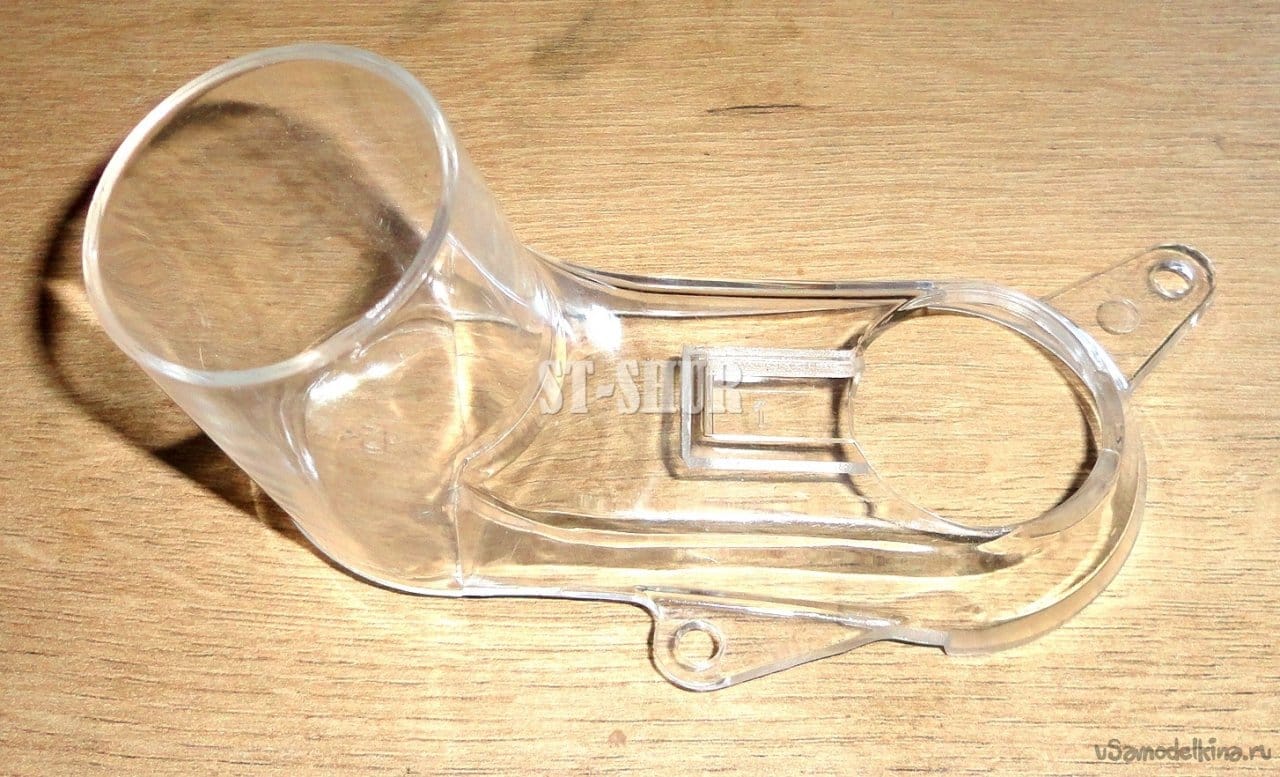 The bottom cover and the top cap cut out of plastic for the Bosch router adapter.
To fasten the adapter to the drill stand, a washer, M5 nuts and a 50mm long screw are used. A 5mm hole is drilled in the top slot of the adapter. To increase the convenience of adjusting the height of the adapter relative to the MFI working equipment, a wing nut is used. 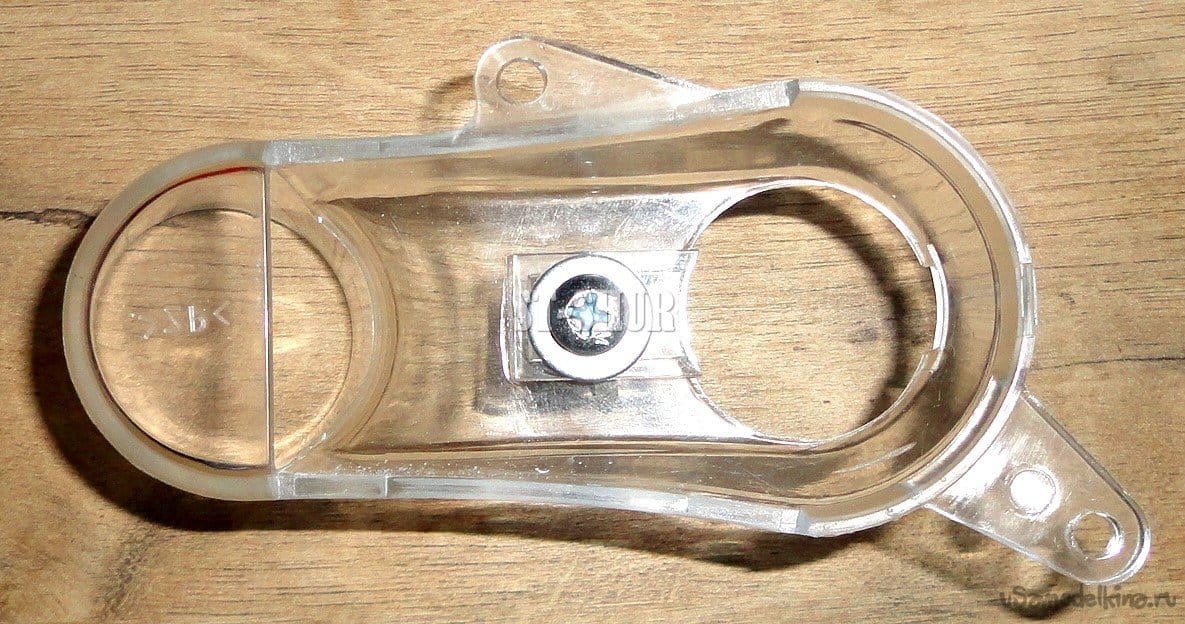 When the stand is in drilling mode, a bottom cover is installed on the adapter, which improves the concentration of air flow closer to the drill. When working with abrasive wheels, cutters and cutters, the device does an excellent job without an additional cover, because the bottom cutout of the adapter is located exactly along the direction of the “train” of the formed sawdust. The cover is secured with just one screw with an M5 nut. it rests against the edges of the lower slot of the adapter, this is quite enough for its sufficient fixation. No additional sealing was required, the lid is pressed against the adapter due to the pressure drop when the vacuum cleaner is running.

When installing the adapter back on the platform of the hand router, the upper plug is tightly inserted into the upper groove to cover the screw hole.
As an adapter for the hose, a cut of a connecting sleeve for polypropylene pipes with a diameter of 32 mm was used. It is also used when working with the Bosch router and the CYCLONE-18 sawdust removal system (described earlier).
The illumination device is made of a Chinese illuminated magnifying glass (purchased from the FIXprice store for 99 rubles). For alteration, the lens was simply removed. On the side, the device has a convenient power button with fixation. Powered by two AA elements.
The LEDs of this product give a fairly bright and at the same time diffused, soft illumination. This allows you to avoid unnecessary glare and contrasting shadows in the area of ​​the workpiece being processed. This is also facilitated by the good transparency of the plastic adapter.
The illumination is quite simply and conveniently attached to the drill stand using two nylon ties using ready-made technological holes (no special drilling required). And it is conveniently located just between the mounting screws of the drill stand. 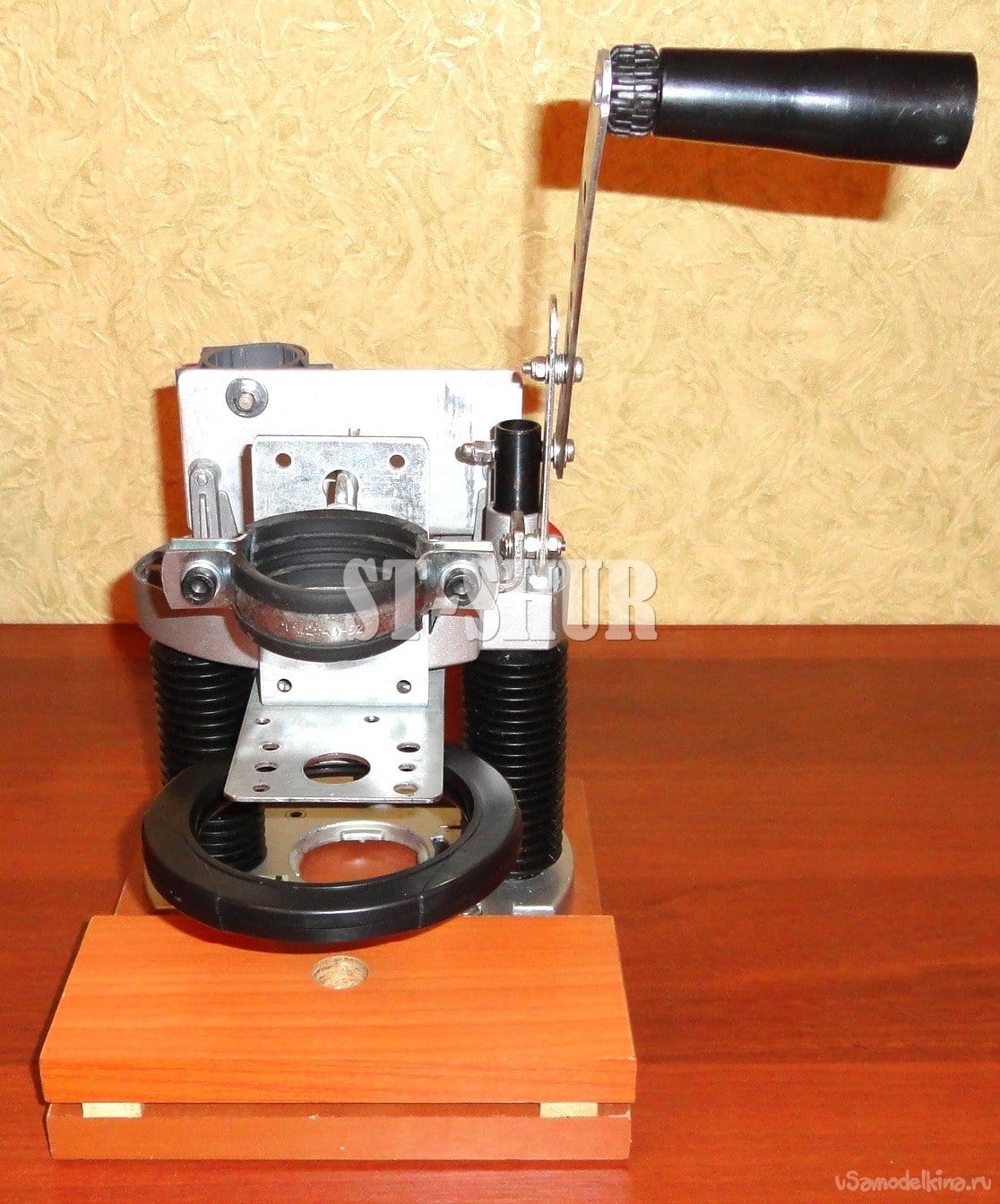 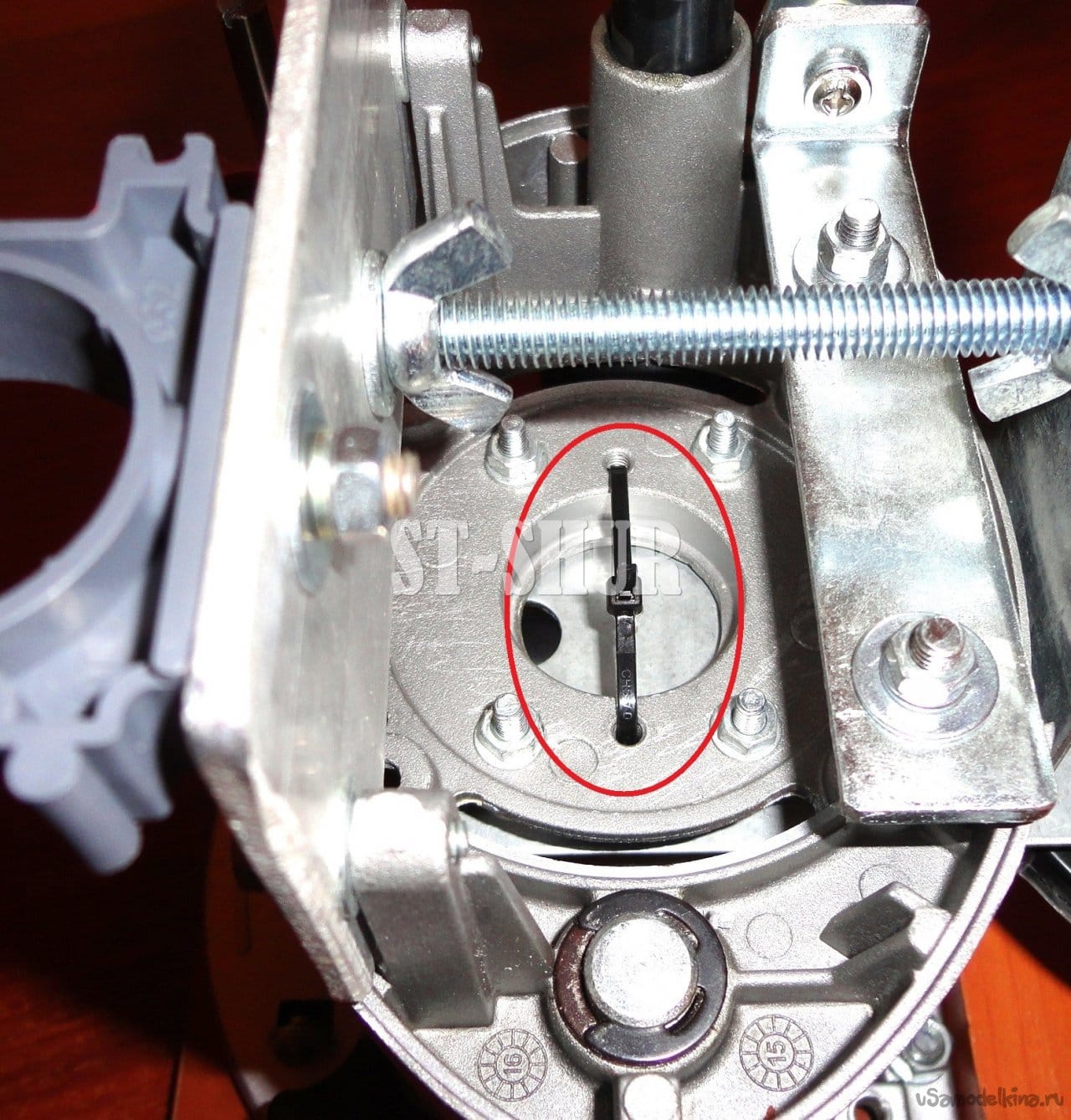 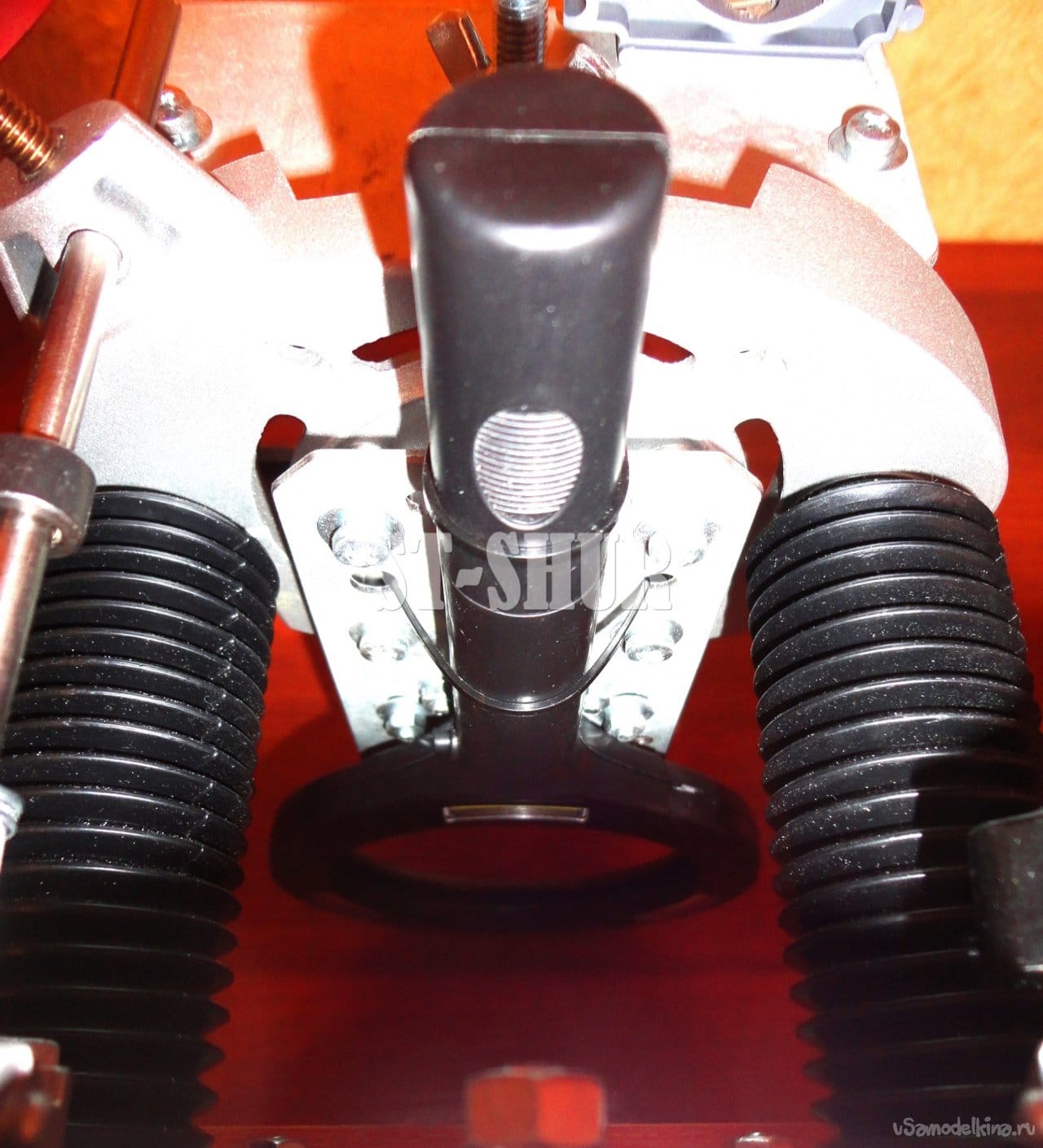 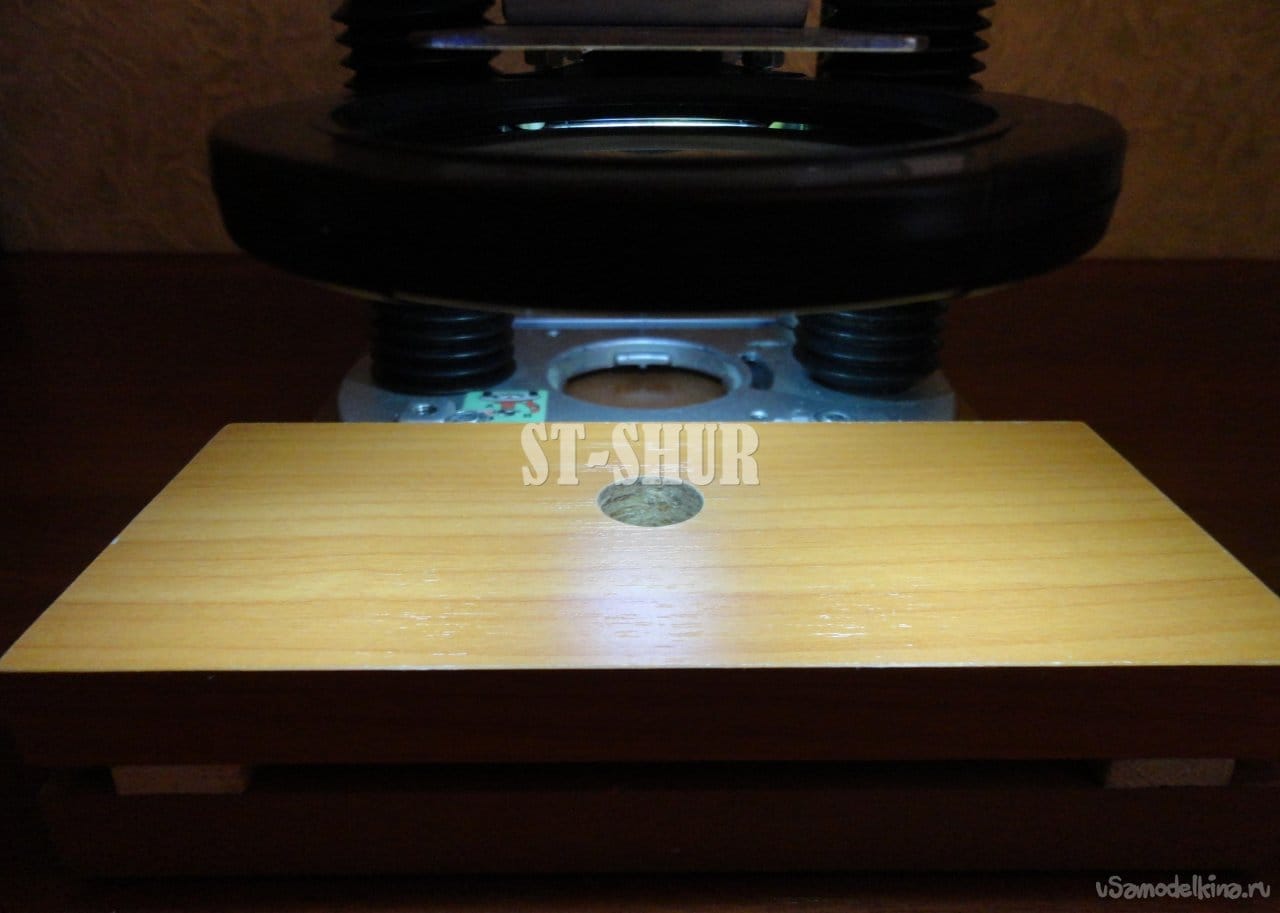 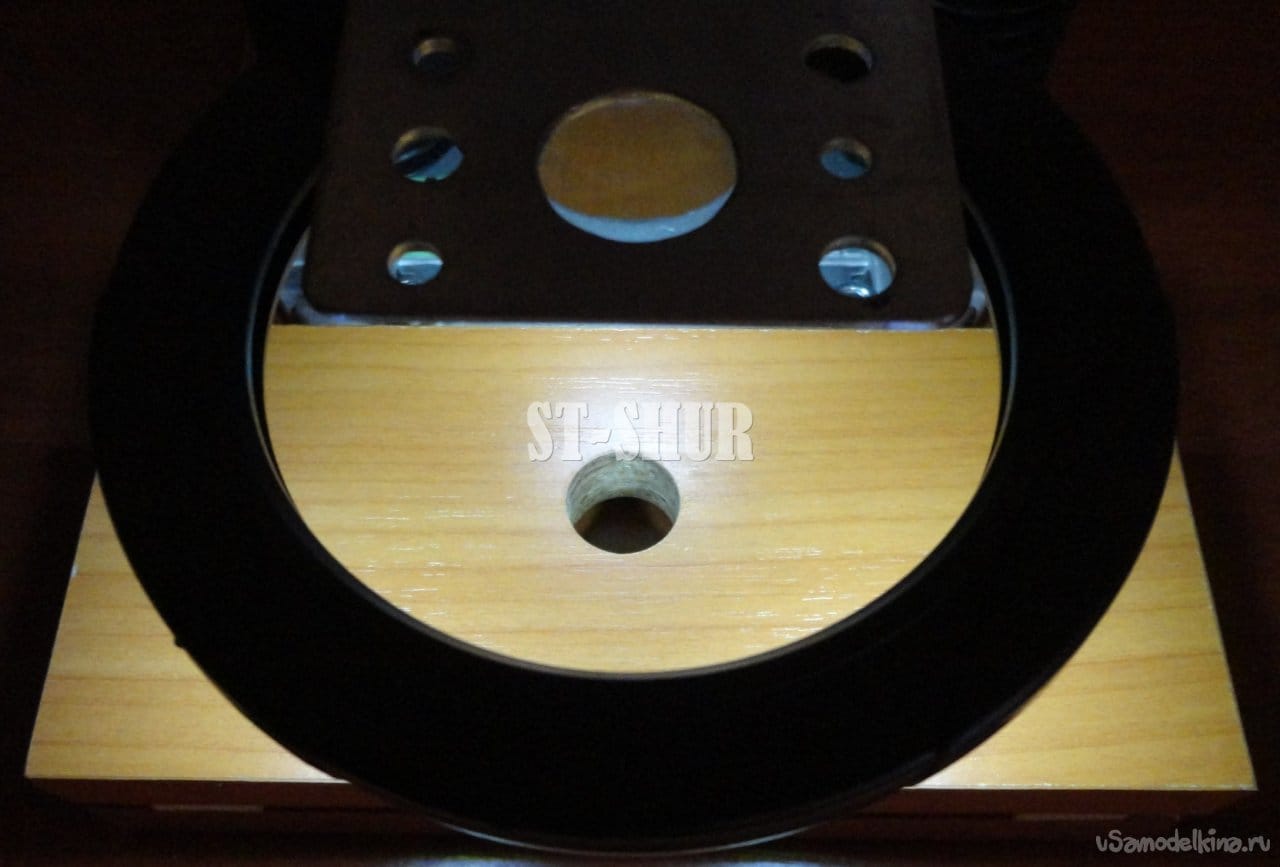 After installing the backlight, using the prepared hole, the sawdust suction adapter was fixed. 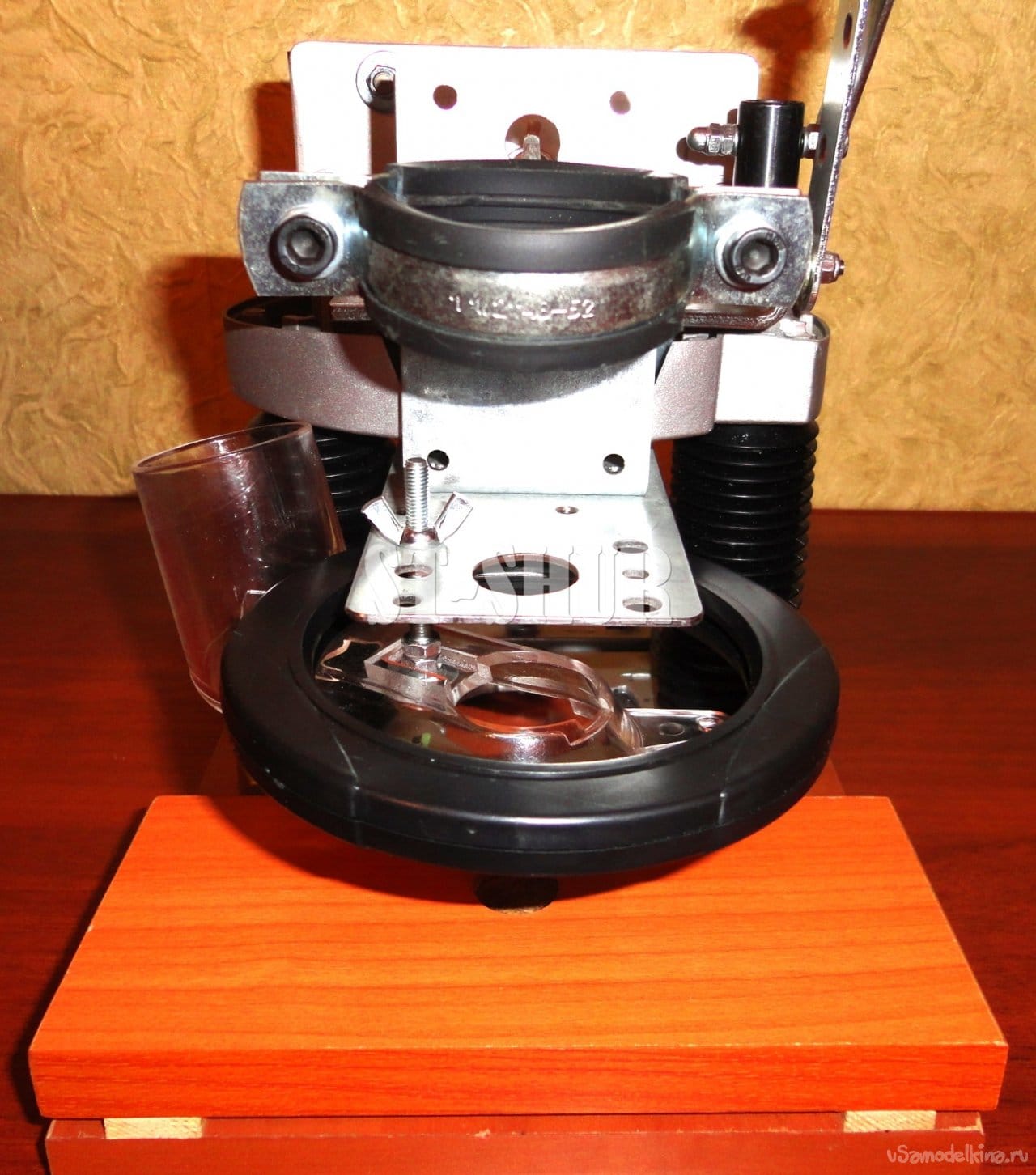 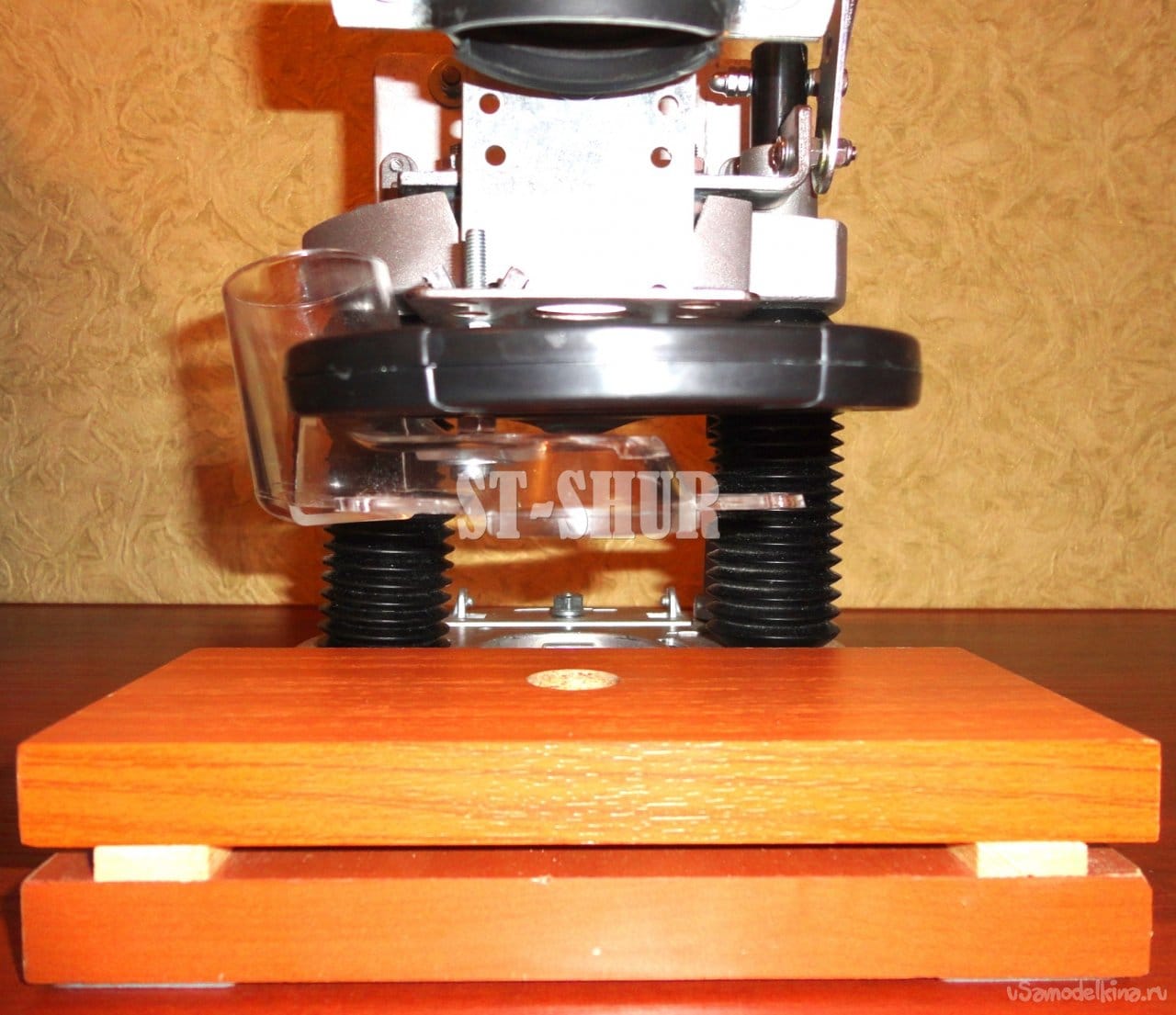 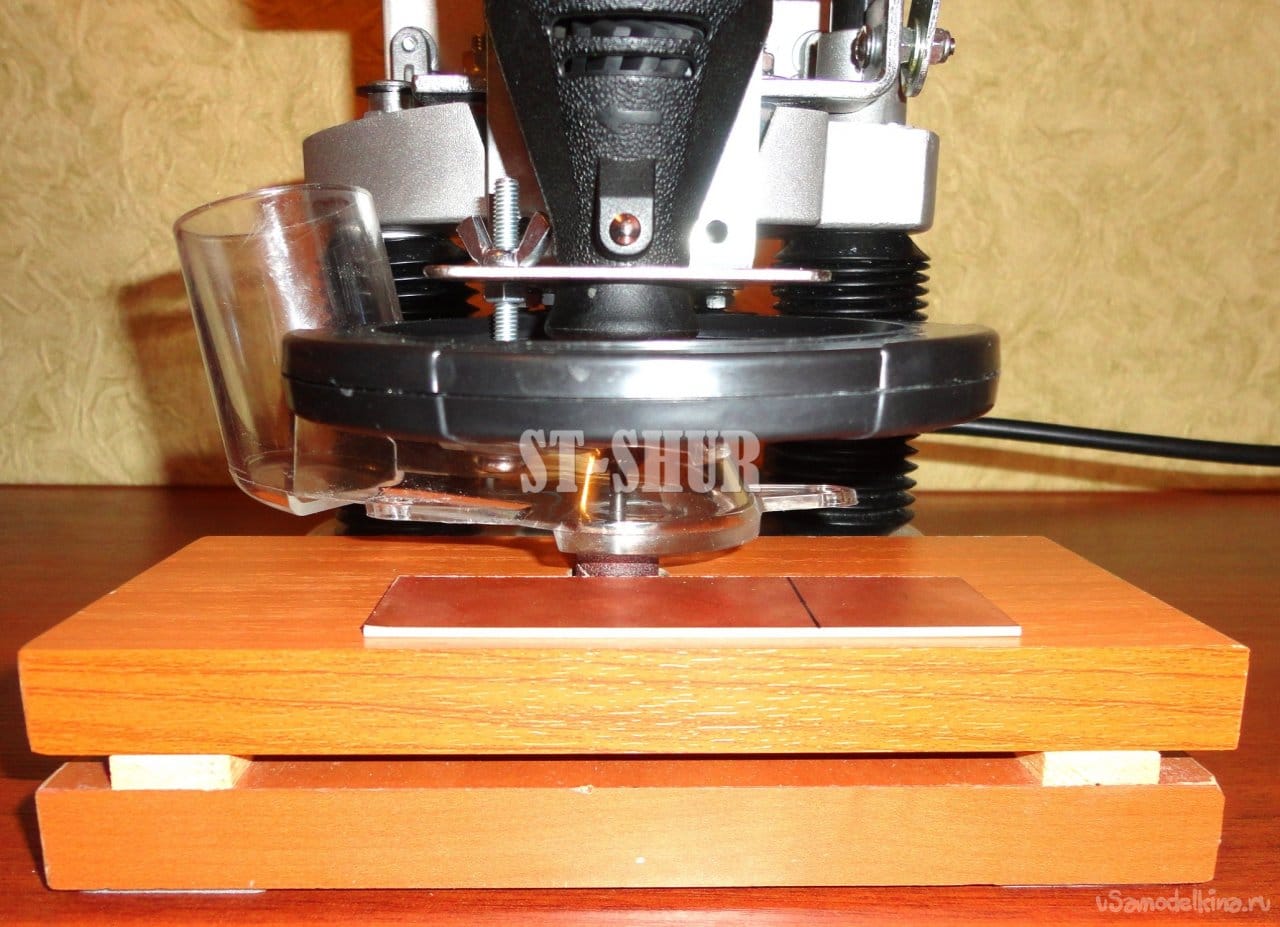 Coverage area of ​​local highlight when working with an emery wheel. 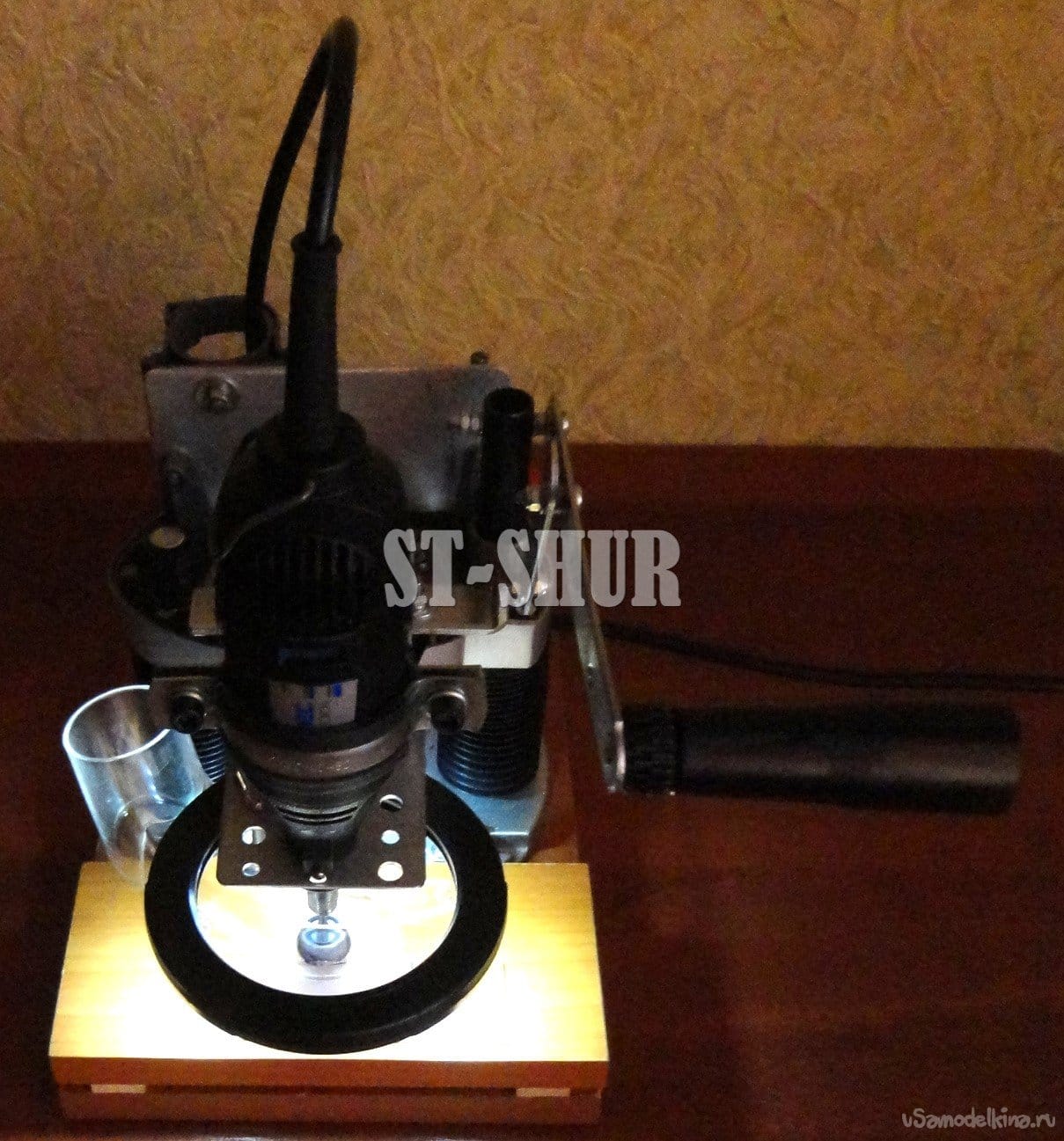 Coverage area of ​​local illumination when working in drilling mode. The point of contact between the drill and the workpiece is fairly well visible.

For the convenience of connecting the hose, a plastic clamp for pipes with a diameter of 32mm is fixed on the back of the drill stand with an M5 screw. This solution avoids lateral loads on the plastic adapter due to possible tension and displacement of the hose. 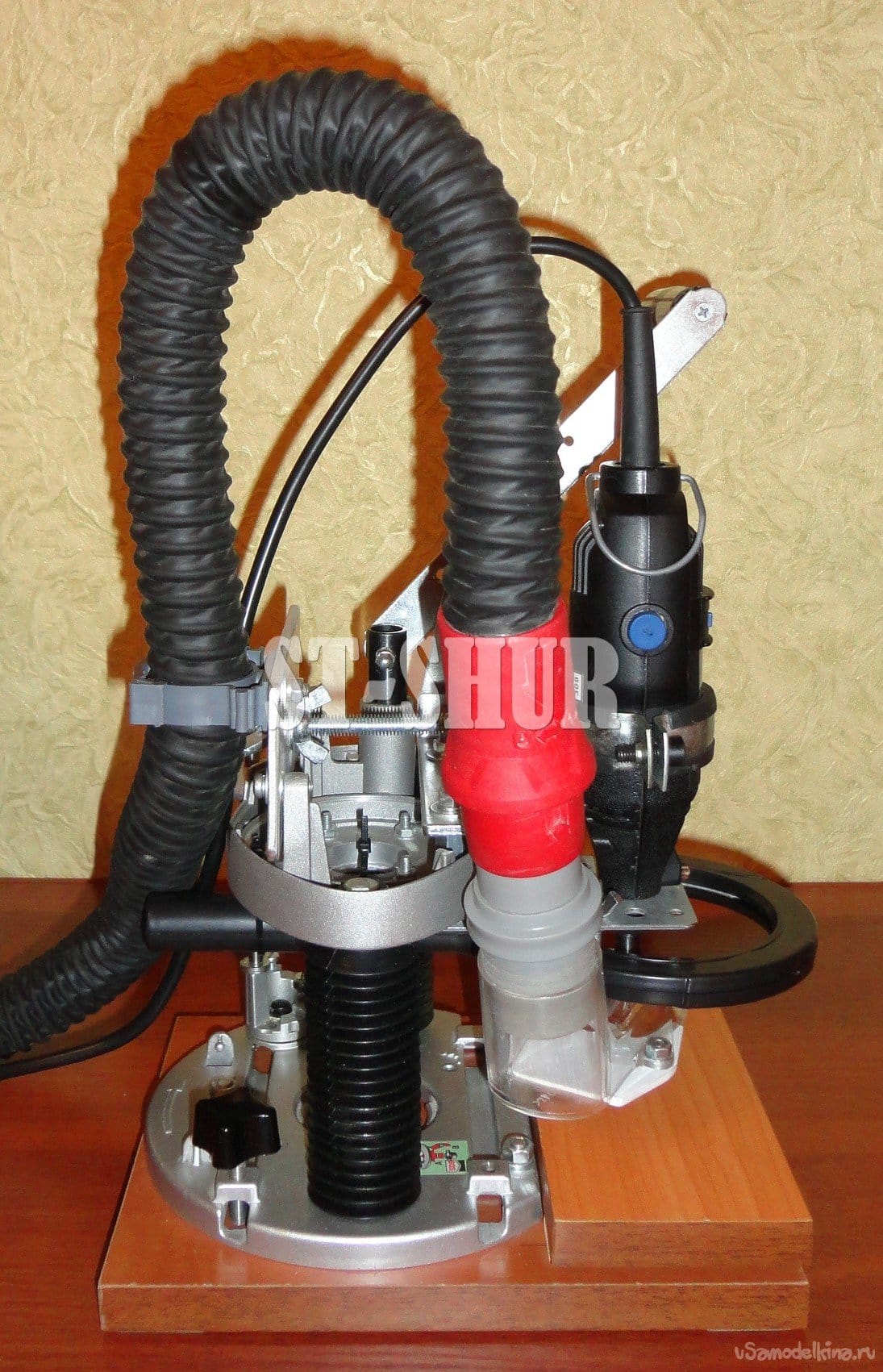 The resulting construction works well enough in conjunction with the system described earlier in the previous article “CYCLONE-18”
If something is missing in the description, I hope these nuances can be seen in the presented photos. I apologize in advance for possible errors and misprints.
If you need more information, write to the mail, I will try to be sure to answer.
Reviews, ideas (on the topic), suggestions and comments are very welcome.
May 2021
Stanislav Shurupkin.
Email: [email protected] The question/topic is automatically published in the social. site network – follow the answers there too:

Automation for the tank to the country