Let's make a reservation right away, we are talking about a specific model of a multimeter, namely UNI-T UT61E. According to the master, and according to some reviews, the UNI-T UT61E multimeter has become one of the most popular multimeters in the electronics market for amateurs. The accuracy of measurement, ease of use, functionality make it such.
However, along with the advantages, it also has one obvious drawback: the protection of the entrance. Due to the competitive price of the device in the Chinese version, both overvoltage protection and overcurrent protection are left behind.
In this article, the wizard will introduce us to the possibility of updating the device that will make it a better tool.
Step one: why it is important to have overvoltage and overcurrent protection in the multimeter
Sometimes a high voltage is measured with a multimeter, although it is not intended for this. The reasons can be different, from simple ignorance to errors in measurements. And the consequences of such a measurement can also be tragic.
In the video below, you can watch the testing of various multimeter models. Cheaper devices that do not have protection, after such testing, simply explode. At the same time, devices with protection receive only minor damage, and some of them can even be reused after minor repairs.


Step Two: UT61E Enhancements
The UT61E version called “GS” has no security problem. This device is made exclusively for the German market, and is slightly different from its Chinese counterpart. It comes with a lower rated voltage (CATIII 300V, CATII 600V) than (CATIV 600V and CAT III 1000V) in the regular version.
Although these values, like most Chinese multimeters, are completely fictitious. If we look at the first image, we see the internals of the German version on the left and the Chinese version on the right. The first one is equipped with varistors, thermistors and larger HRC fuses, which makes the characteristics much more believable.
If we look closely enough at the first and second images, we will notice that both printed the boards are exactly the same. This means that you can significantly improve the capabilities of protecting the input of the multimeter by installing the missing elements.
The third and fourth images show the complete diagram of the device, and the fourth – a fragment of the protection design entering the German version of GS. 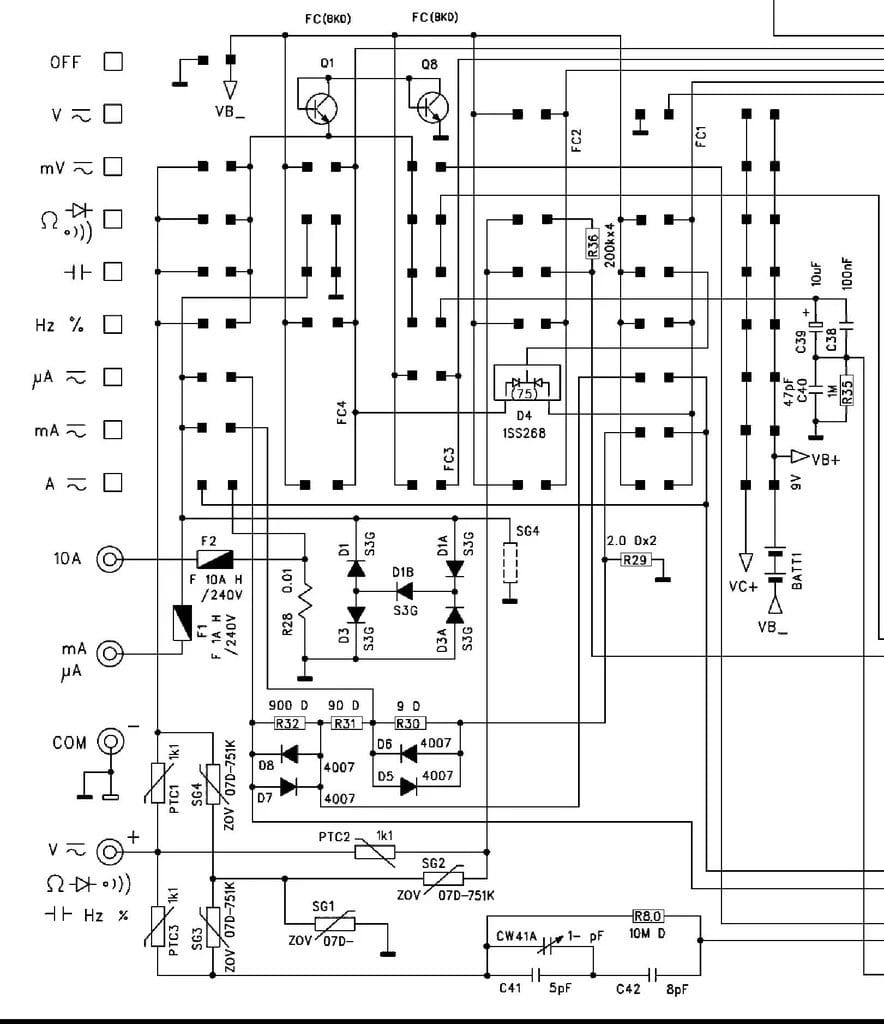 Step three: how login protection works in UT61E GS
Multimeters are designed to measure several values ​​at the “V” and “COM” terminals, such as resistance, open circuit, capacitance, etc.
UNI-T UT61E GS implemented a classic approach to the issue of protection. A PTC pair is connected in series with both terminals to limit the maximum current in the event of a short circuit, and several varistors are installed to protect against high voltage. As for the millivolt range, a pair of transistors are used as zener diodes to prevent overvoltages at the microcontroller input.
The micro and mA ranges are also protected against overcurrents that can damage the shunt resistors. This usually happens due to user errors, for example, when this output is connected in parallel to the mains.

The second figure shows how easy this is to implement in a UT61E with a 5-diode bridge. It consists of a conventional 4-diode bridge rectifier for positive and negative processes and an additional diode closing the bridge. This is an additional protection mechanism, since the fuses do not operate fast enough to protect the shunt from destruction. 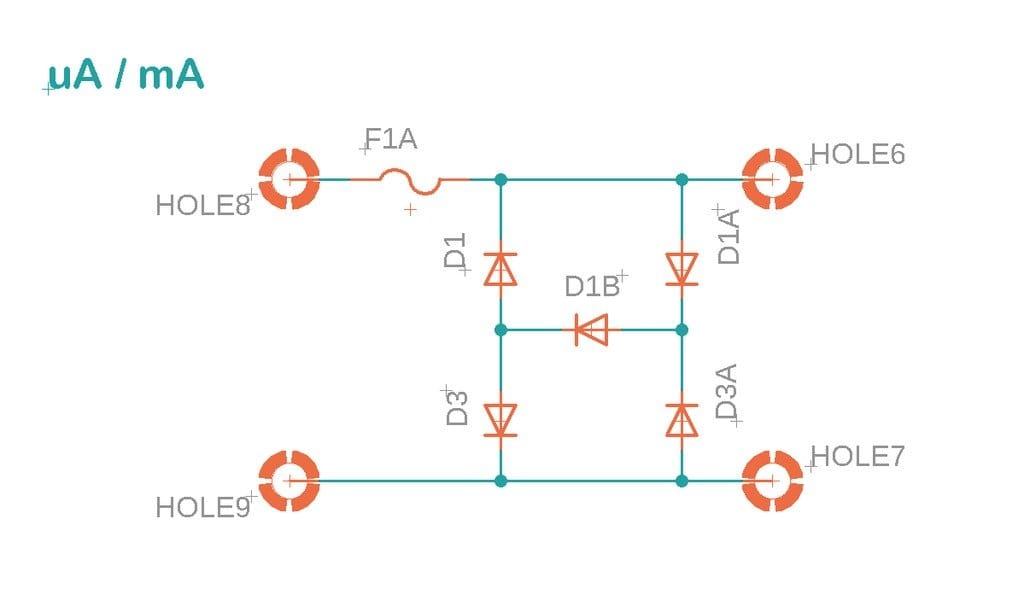 Step four: disassembling the UT61E multimeter
It is not difficult to disassemble the multimeter, the case is fastened with only three screws, as you can see in the photos. 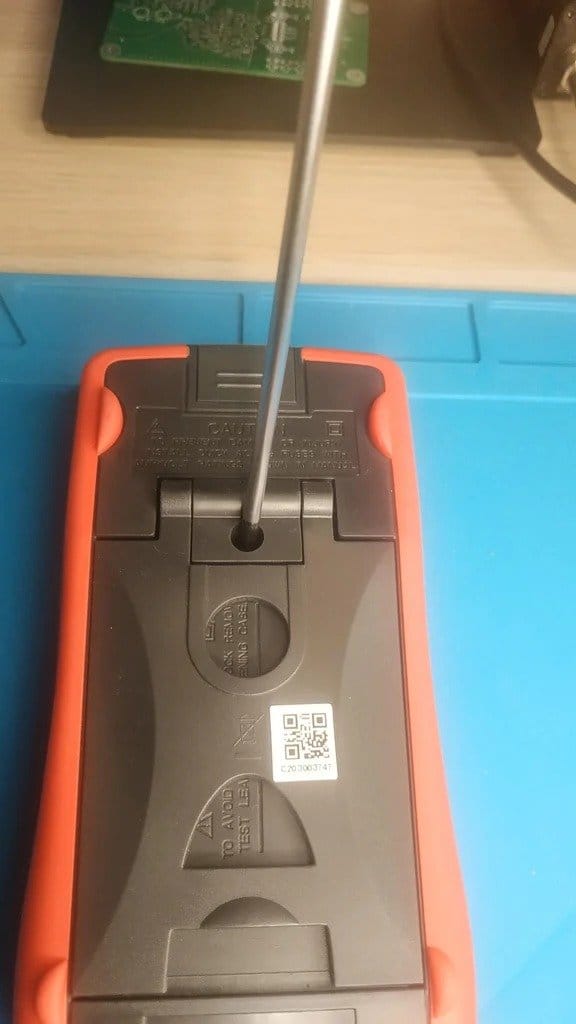 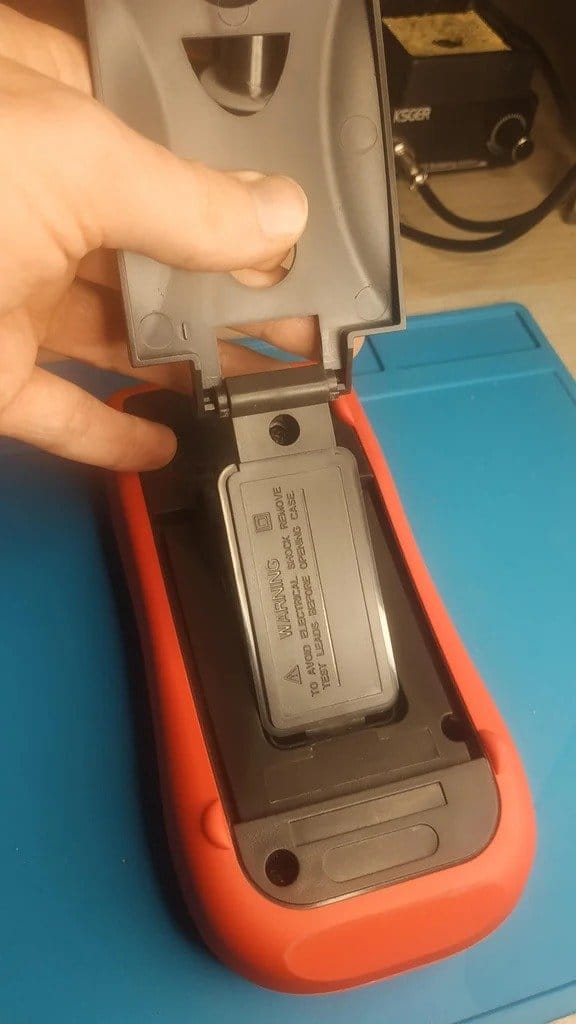 There are also three screws that attach the board to the top cover. 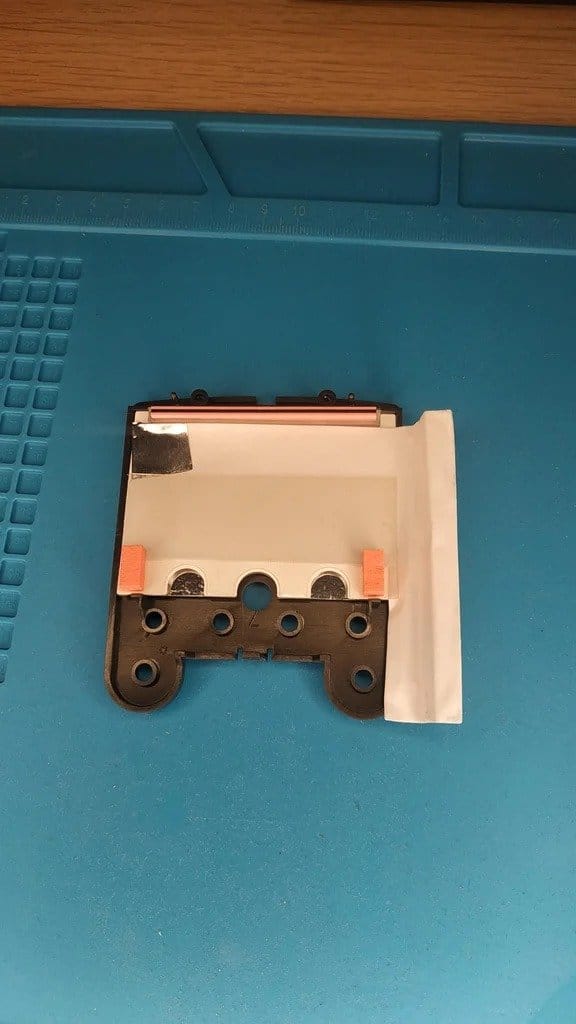 Step Five: Install High Voltage Varistors
In the diagram shown in the previous steps, the GS version uses BOURNS MOV-07D751K varistors rated at 825V and a stray capacitance of 70pF. Instead, the wizard installed the EPCOS S10K385 B72210S0381K101 kit, as he had them in stock. They are rated for 505 VDC and have a stray capacitance of 150 pF.
To install them, simply cut the legs to the desired length, then solder directly to the top of the PCB pads. 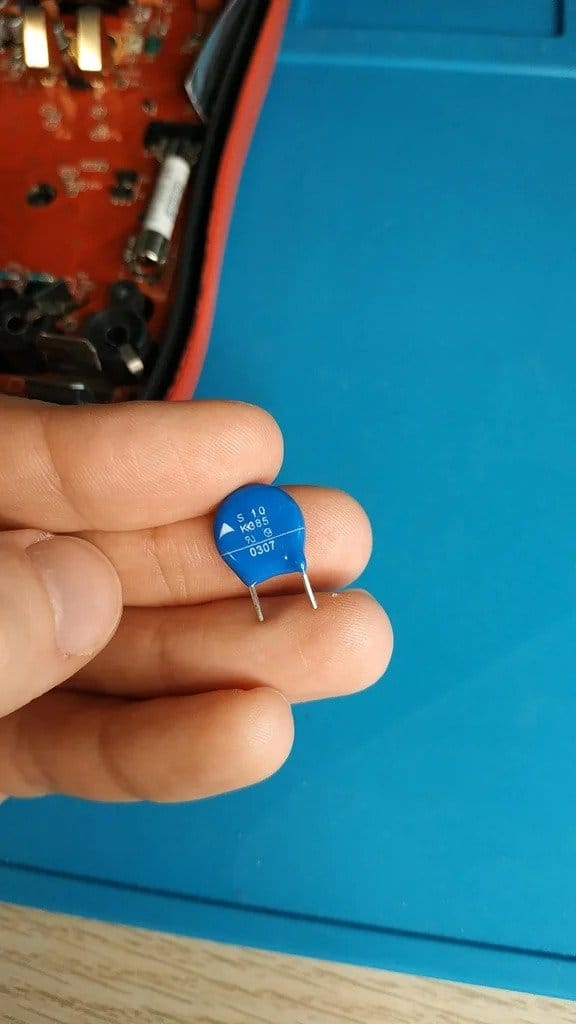 Step six: high breaking capacity (HRC) fuses and their ratings
Top grade multimeters include a special type of fuse called “HRC” or high breaking capacity fuses that are capable of withstanding the rated short-circuit current for a specified period of time without tripping.
They are made of heat-resistant ceramic materials and stronger metal plugs than conventional glass fuses. In addition, the inside of the fuse is filled with powdered sand to prevent air problems. Thanks to this filling material, they can dissipate heat better than conventional fuses, allowing them to withstand the rated current without overheating.
When they eventually burn out, the silver-containing fuse and the fuse fill chemically react, resulting in formation of a path with high resistance, extinguishing any electric arc.
That is why it is recommended to have high-quality HRC fuses in the multimeter. 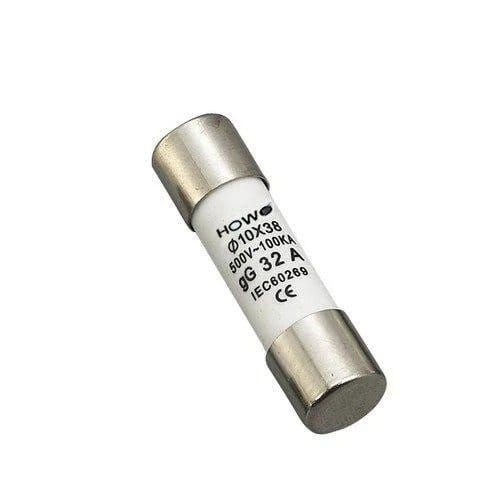 Step seven: replacing the low-current (500 mA) fuse
Replacing a milliampere fuse is a fairly straightforward task. First remove the old 6x25mm, 250V, 1A fuse. Note that the larger fuse requires a different holder. A seat for such a holder is already provided on the board, you just need to re-solder one of the holder's contacts.
The holder is now compatible with 6×32 mm fuses. The master installs a 500 mA 1000 V fuse.
Step Eight: Replacing the High Current Fuse
As with the mA range fuse, there are alternate locations for the larger fuse on the board. Therefore, first remove the old 250 V 10 A fuse and unsolder both fuse holders. Instead of the old holders (6.3 mm), he decided to install other holders (10 mm).
The new fuse, DMM-B-11A, is 10mm in diameter, but the pads on the board are clearly for 6.3mm fuse holders. The 10 mm holder does not correspond to the base area and will not allow the body to close. Use pliers to slightly bend the pins at the bottom of the holders so that they line up with the contact pads. Then you need to solder them in place. 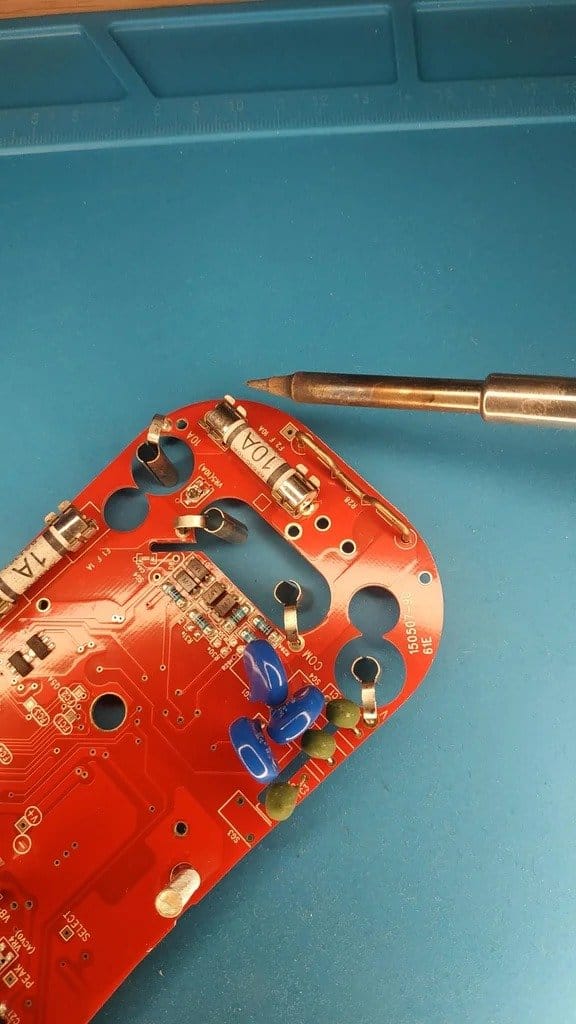 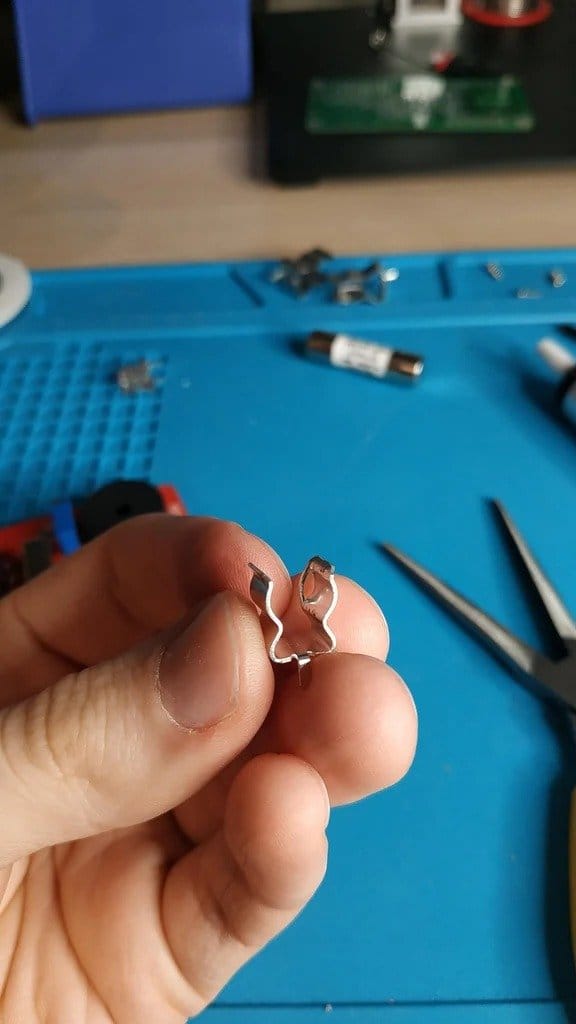 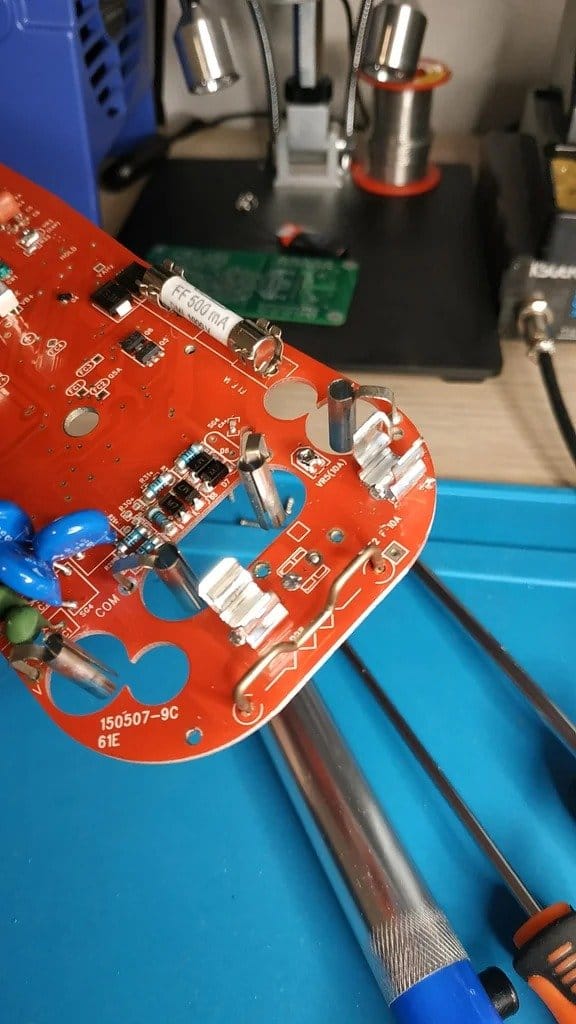 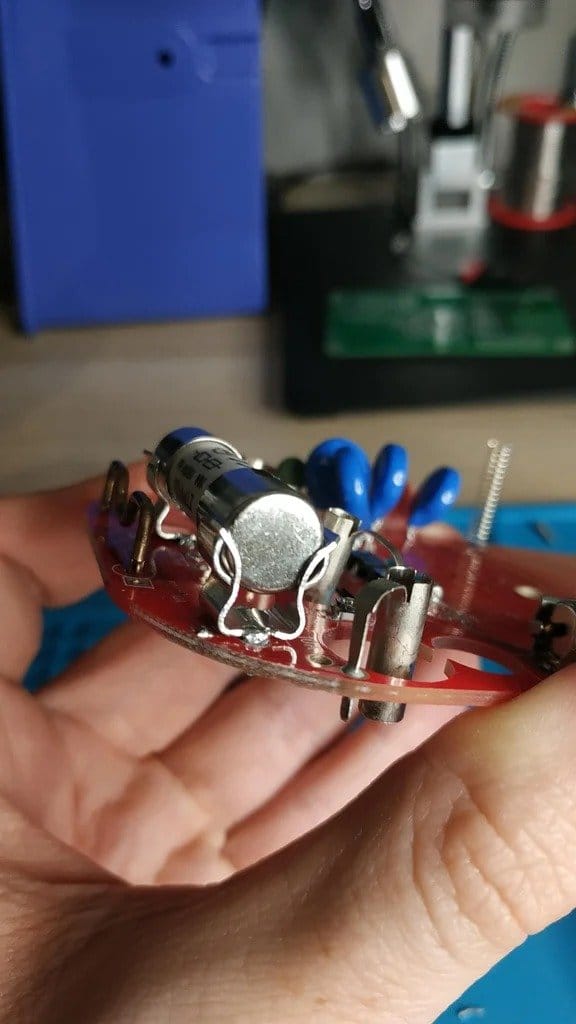 Now you just need to assemble the device and everything is ready. 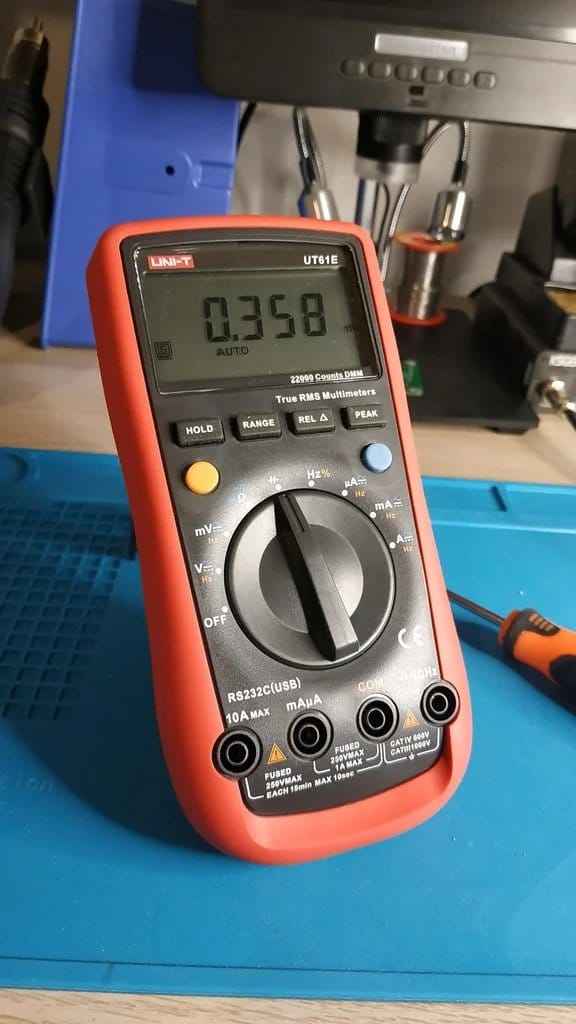 The question topic is automatically published in the social. site network – follow the answers there too:

Template for drilling dowel holes for corner joining of parts