Greetings to all lovers of homemade products and those who just looked at the site in search of interesting ideas that may come in handy in the everyday life of a homemade builder. Today I present to your attention an unusual (in any case, I see it for the first time) homemade product. Maybe I wrongly “called” it, but the author calls this device just that – a notch for pipes. The author uses this device in order to cut round pipes with a crown nozzle for their further welding. The construction is not complicated to manufacture and does not require a large amount of materials and tools. But I think it will be useful to every DIYer. If you are interested in this idea, then you are welcome, we begin to comprehend the manufacturing process. At the end of the article there will be a video, after watching it, it will be even clearer.

* sheet metal (thickness about 8-10 mm, maybe a little more),
* channel with a width of 10-12 cm,
* boots, nuts and washers,
* a pair of insert bearings (marking is not known),
* metal round timber of different diameters, but one of the round timber must have a diameter equal to the diameter of the inner race of the bearings,
* metal plate, about 8-10 mm thick,
* a long bolt and several nuts for it,
* chuck from a drill.

As with any other homemade product, we start with the basics. We cut out a plate of a suitable size from sheet steel (selected individually). We process all the edges with a grinder. On one side, along the short edge, we find the middle, put a mark and drill a hole along it. We cut a thread in it.

Take a piece of metal plate (its width should be equal to the width of the selected channel), cut it to the required length, it should be slightly larger than the base width. From one edge we mark and drill a hole of the same diameter as on the base closer to the corner.

Connect both previously prepared parts together with a bolt, washer and nut.

We take our channel and cut off a workpiece from it with a length slightly less than half the length of the plate, which was fixed on the base. We put marks on the workpiece in the corners and drill holes of the required diameter along them (it depends on which bolts you use, but they must fit the thread to the housing bearings).

Next, we take our piece of round metal and string the housing bearings onto it. Then we screw this unit to the prepared channel with bolts. We hold the result in a vise and check how the round timber walks in the bearings. Spill it with oil and move it back and forth, it should walk smoothly and without jerking.

We remove the round timber from the bearings (hereinafter we will “call it” the axis) and weld the channel to the plate fixed on the base.

Next, cut off two rectangles from the metal strip. We also select the sizes individually. On each we carry out the markup as shown in the photo. We cut a wedge along it with a grinder with a slight offset from the center. After the edge, we process each part with a grinder. 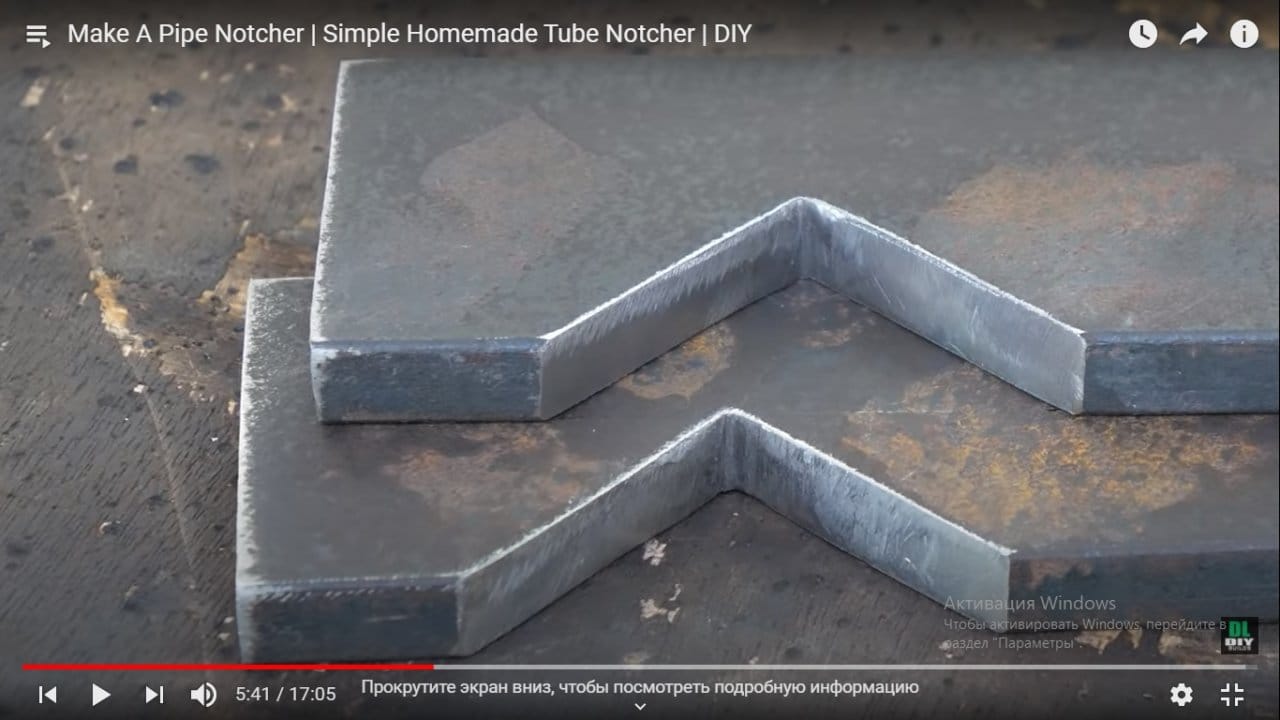 At this stage, try on the resulting parts and weld them to the base on the edge with the larger side from the edge of the wedge. We weld the parts parallel to each other and parallel to the screwed plate. The distance is determined so to speak “by eye”. Everything is relative here.

Cut off another rectangle of suitable length from the same strip (it is not difficult to find it based on the photo). In it, on one side, we outline and drill a hole of such a diameter so that we can cut a thread in it for the long bolt we have selected. Then we cut the thread. Next, we install the part opposite the previously welded strips with cut wedges as shown in the photo and weld it.

Again, we cut off three more blanks from the same strip, two of the same size and one about a couple of centimeters longer. We clamp a large part horizontally in a vice. We install on the edge flush perpendicular to the smaller one – weld on. We also fix the second part on the other side.
Next, we reinstall the result in a vice as shown in the photo. We mark and cut out the wedges as the author does.

On the” back “of the part, we mark strictly in the center and drill a hole along it with a diameter equal to the diameter of our bolt.

At this point, go back to the bolt. We screw on it a nut slightly larger than the cap all the way to the stop. It is necessary to screw it so that the edges of the nut coincide with the edges of the cap. On one of the faces of the nut, we define the center, connecting the corners along the diagonals. We grip the part in a vice and drill a through hole according to the marking.

Screw the bolt into the threaded plate. Then we screw a nut onto it to a certain level. We string the previously made part onto the bolt. Then we screw in another nut flush with the end. We tighten the nut, screwed on first, close to the part and weld it to the hairpin. On the other hand, insert an elongated bolt into the hole in the nut and screw the nut onto it.

At this stage, we return to our axis, which is installed in the bearings. We shorten it on a cutting machine and install it in a lathe chuck. On the one hand, we grind to a diameter so that you can clamp it in the drill chuck. On the other, we end and drill a hole for the shank of the drill chuck. Since the author used a chuck with a shank, which is installed in a perforator, he cut off this part with a grinder, holding the chuck in a vice.

Then, in a vise, we clamp our axis vertically with the hole up. We install the chuck from the drill into it, grab it, reinstall the part horizontally and weld the joint in a circle. We process the seam with a grinder. We install the finished axle in the bearings. Once again, we check its course, let me remind you that it should be smooth, without jerks. The device is almost ready.

At the final stage, we paint our device in the color we like (the author uses black and red) and proceed to testing. In the chuck on the axis we clamp the bit-crown, and from the arc side we clamp it in the drill. We clamp the experimental pipe in the wedges. Turn on the drill and drill (cut) at right angles. The result is a piece with a neat end that can be welded at right angles. Next, we change the angle of the plate with the axis, squeezing and then holding the fastening bolt, and again drill the workpiece. Everything turns out neatly again.

Based on this, we can conclude that using this device you can quickly, easily, and most importantly accurately, cut a round pipe at any angle for further welding. I don't know about you, but, in my opinion, this tool will definitely come in handy for those who often have to weld structures, especially from round pipes. But this is purely my opinion, maybe the welders will not agree with me. In general, if something is wrong, he comments, and if you like the idea, take note. Video to help.
That's all for me, thank you all for your attention, good luck and see you next time visiting Samodelkin !!!