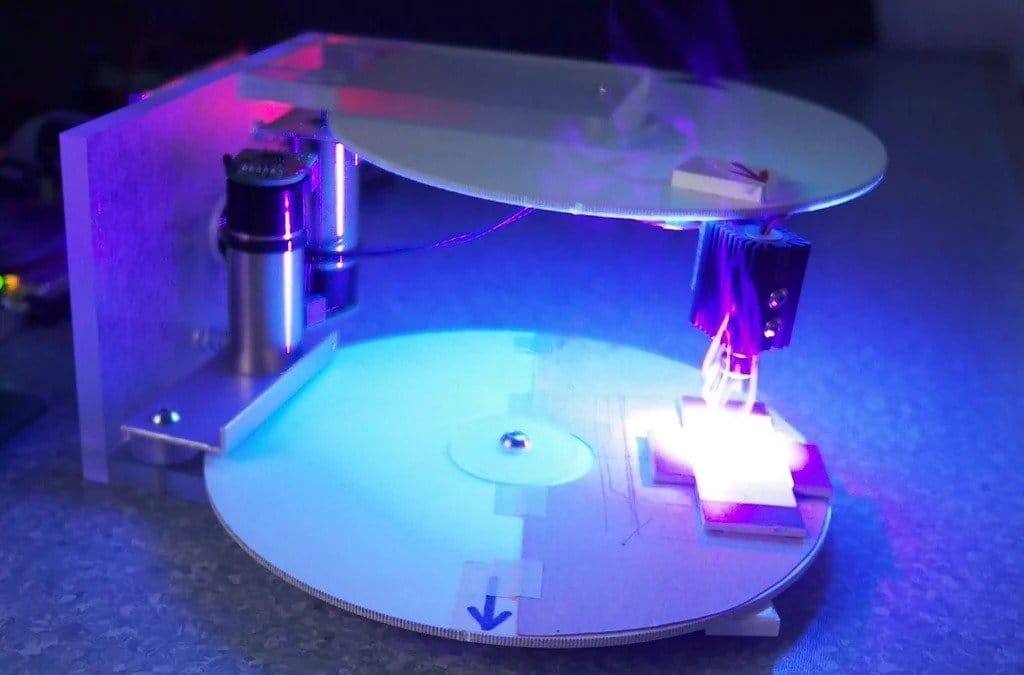 The traditional idea of ​​a CNC laser machine is something rectangular with a moving carriage or laser module.
This machine breaks stereotypes about such devices. This is a machine that has two rotating discs. On one of them the laser module is fixed, on the other the workpiece to be processed. Both discs rotate and as they rotate, the laser beam is projected onto a given area of ​​the part.
To make it clearer, let's watch a short demo video.

This article is not assembly manual, but rather an overview of this machine and some calculations, design features, etc. Some parts are quite expensive or difficult to obtain, but readers who decide to try to repeat the manufacture of such a device can try using their own parts.
Tools and materials:
-Servomotor D2R 11 219P B 100Y;
-Controller MC403; -Laser module; -Gears;
-Bearings;
-Acryl;
-Circular saw;
-Drilling machine;
-Fasteners;
-Screwdrivers; < br> Step one: working principle
The design of the device is innovative. Instead of the standard programming and design of CNC machines with XY axes, it uses two rotating discs. For this design to work, the appropriate kinematic transformations must be applied. It is necessary that the internal coordinates of the device move the motors in accordance with the generally accepted coordinates. Only then can standard XY programming be used.
The mechanism uses two rotational movements: the first axis of rotation moves the workpiece, and the second axis moves the laser module in the transverse direction. Although movements along both axes are rotational and therefore non-linear, the movement of the mechanism is carried out in external coordinates, that is, in a Cartesian coordinate system, and is performed using a kinematic transformation. Motion path generation, positional control of both servomotors and real-time kinematic transformation calculation are performed with the TRIO industrial motion controller.
When planning the design of the mechanism, the master was guided by the following principles: simple, innovative, efficient and easy to manufacture. Both axles are identical and are made on the basis of a swivel plate with a diameter of 200 mm with an external cycloidal gear (m = 0.3), driven by a servo motor through the second gear.
Step two: about accessories
Engines
The master used two DC servo motors from the manufacturer ESCAP type D2R 11 219P B 100Y. These are highly dynamic permanent magnet DC motors with iron-free rotor. … The motors are connected to a 12V servo amplifier and have a rated power of 15W. The motors have a gear mounted on a shaft of m = 0.3 and have 19 teeth, which allows power to be transmitted from the motor to the larger gear. An optical incremental (step) encoder with 100 pulses per revolution is installed on the motor shaft. It was used to measure speed and position. 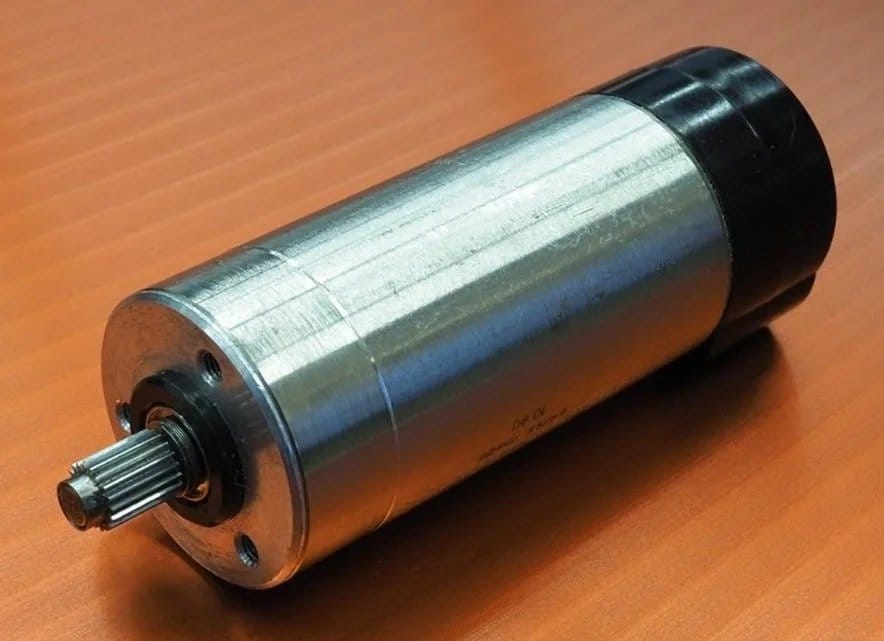 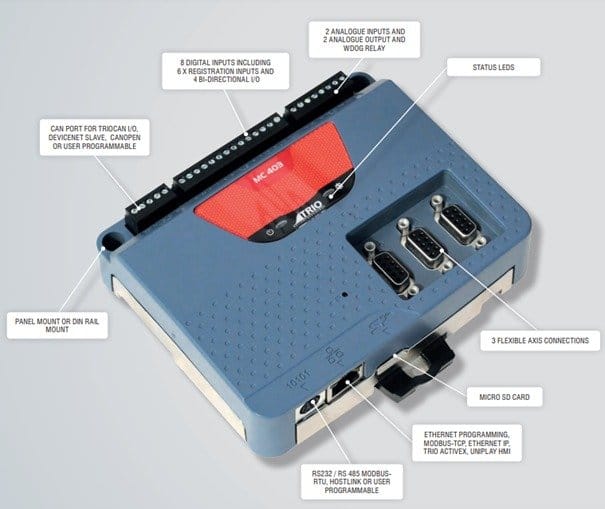 Laser module < br>The laser is connected to a pulsed power supply with an output voltage of 5 V. The switching circuit turns on the laser beam according to the signal from the digital output of the controller. The laser power is 1 W and the wavelength is 405 nm, which refers to the visible spectrum of light and is perceived as the blue-violet color of the beam. To get quality work, you need to set the optimal focal length, because only then the ray draws a perfect line. 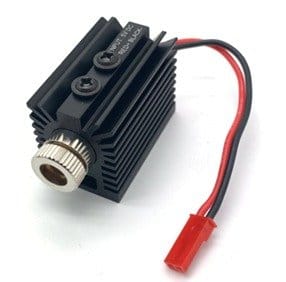 Mechanism
This assembly uses two gears with a diameter of 206 mm and a thickness of 3 mm from. The pinion attached to the top of the structure has 624 teeth, and the second at the bottom has 629 teeth. The laser is attached to the top and the working surface to the bottom disc.
Bearings
Four plain bearings with a polymer flange were used. The craftsman used these bearings because they are easier to install and are comparable to classic ball bearings. These bearings also reduce the weight of the device itself.
Brackets
Two aluminum bearings were made to mount the engine. On one side of the bracket there are holes for mounting the motor, and on the other side, the bracket is mounted and attached to the body. A spring is installed between the plate and the motor. As a result, the gear teeth do not jump over each other and their wear is reduced. 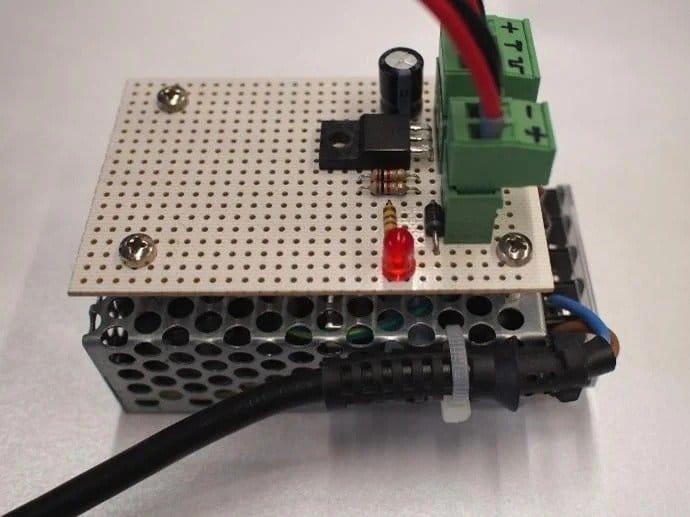 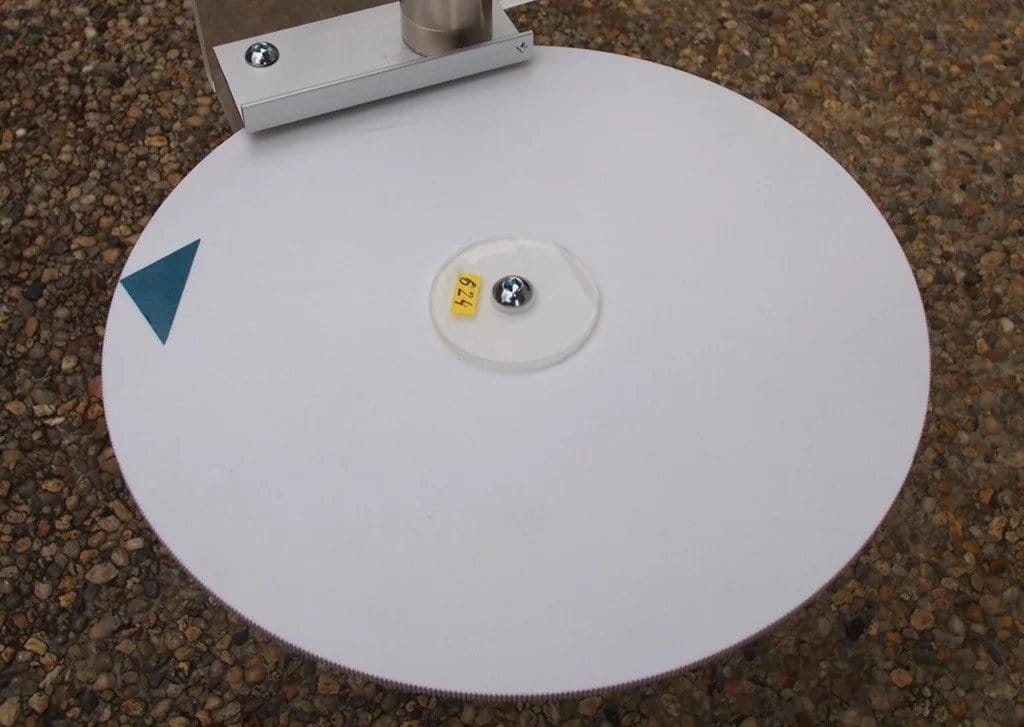 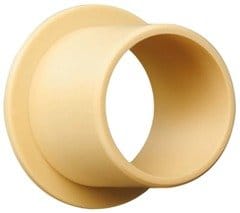 Step three: design
Master used Solidworks software to simulate the device. It is very important that the distance between the centers of the gears is equal to the diameter of the gear divided by 2, because only in this case it gives the maximum area for the laser to work.
The image on the left shows how the device works and moves. It's a bit difficult to imagine at first, but this mechanism can be imagined as a robot, where the first robot arm is the link between the centers of the gears, and the second link or robot arm is the distance from the axis to the laser. 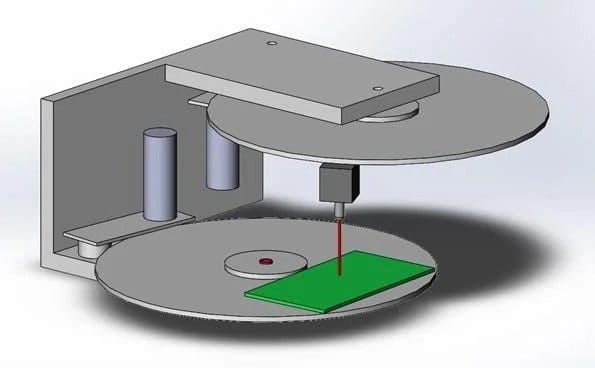 Step four: preparation of other parts and assembly
He cut three rectangles from 10 mm thick acrylic … Two rectangles measuring 140×90 mm and one 193×120 mm.
Then I drilled the mounting holes. The parts are screwed together, and then the motor and gearbox are screwed to the main structure.
Next, you need to cut out two identical circular discs with a diameter of 206 mm, which are the basis for the manufacture of gears. I made teeth on the disks by extrusion (carefully sliding the motor gear over the disks). Both gears need to be reinforced in the center with glued plates of harder acrylic. 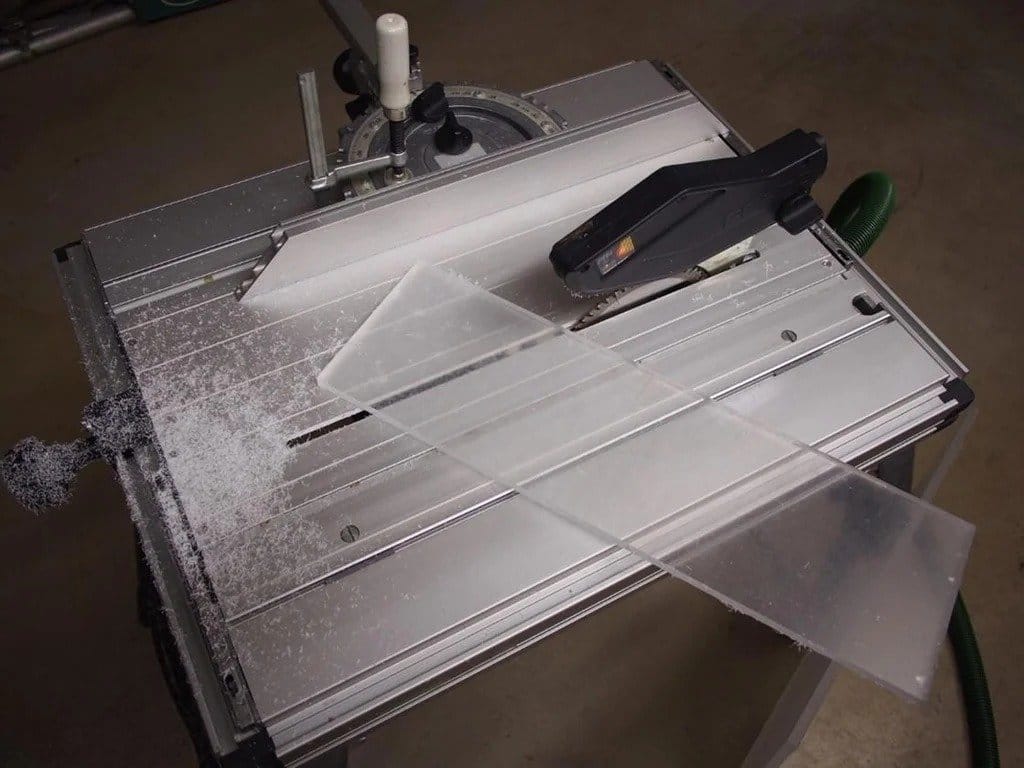 The last steps were to install the laser module and wires. 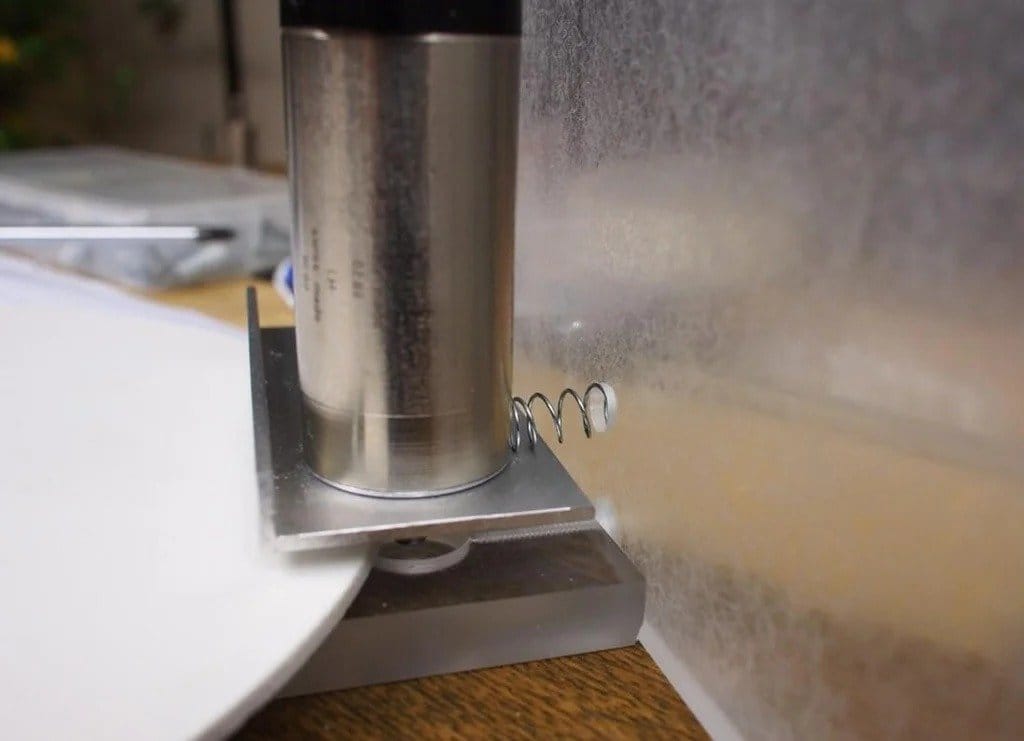 Step five: programming
The code was written in Motion Perfect 4.4. The main task was a function that could be defined and configured for any kinematic transformation, in this case it was a SCARA robot.
All the necessary data is written in the code. Start and stop point, swing angle, disc radius, position of the second motor.
The accuracy of the angle of rotation is set in radians, which is determined by the ratio of the number of teeth on the large gear and the gear on the motor and is additionally multiplied by 4 to compensate for the incremental encoder resolution pulses (for example: (400 * 624/19)/2 * PI). 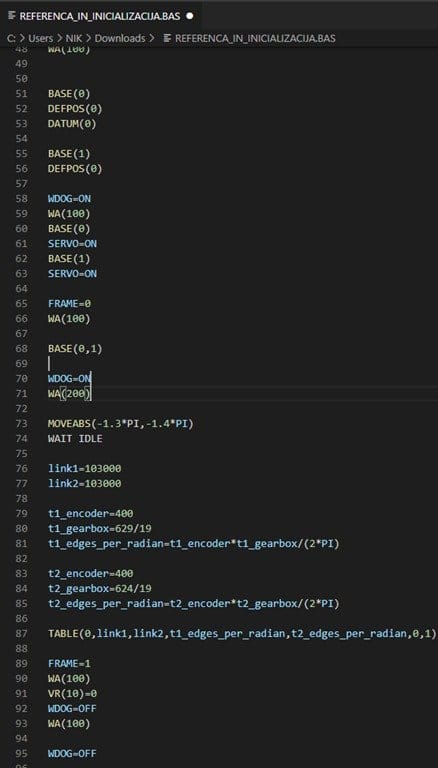 After setting all the parameters, the wizard tests the operation of the machine. Based on the test results, it was concluded that the device is quite functional. 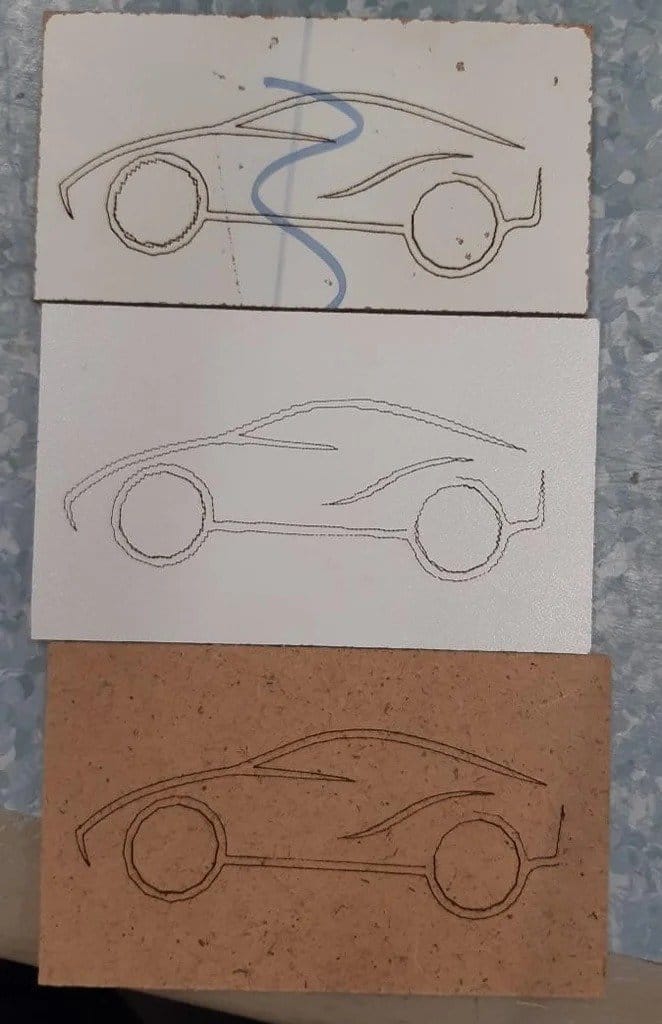