Two simple to make, homemade watering cans from plastic cans, with a capacity of 3 and 5 liters , for watering seedlings, as well as indoor plants.
Greetings to all homemade colleagues, as well as everyone who is interested in homemade products!
Now the epic of growing seedlings on windowsills is coming to an end. As a rule, for most gardeners, a decent part of the seedlings have already been planted in greenhouses or in open ground.
Nevertheless, there are still quite a lot of seedlings that have not yet been planted in a permanent place in the garden. We have at least many more seedlings on the windowsills.
Therefore, today, I want to continue the topic of making homemade devices for watering seedlings. And in this article, I just want to share the ideas of making two homemade watering cans from plastic canisters.
I must say that in one of my previous articles, I already wrote about how you can make a fairly simple homemade watering can from a small plastic milk canister containers.
This is how this watering can looks like.
It should be noted that this watering can turned out to be very convenient and still serves us well. Moreover, it has three replaceable irrigation nozzles. By the way, in more detail, about how to make such a watering can, you can read here .
However, with all its advantages, this watering can has a small capacity. Therefore, when the seedlings were still small, it was convenient to use it, but when the seedlings grew up, this watering can had to be filled with water five times during irrigation so that there was enough water to water all the seedlings.
Then I decided to make a watering can with a larger capacity. More precisely, two watering cans at once – one from a plastic canister with a capacity of 3 liters, and the second from a canister with a capacity of 5 liters. These watering cans, we would have finally been enough for watering even a very large number of seedlings.
At the same time, the spout of these watering cans, I decided to make exactly the same as the nozzles for the watering cans described in the previous article. That is, in the form of a lid from a canister with a piece of plastic hose inserted into it. Moreover, the spout will be one for two watering cans, and depending on which watering can you need to use, the spout can be quickly rearranged to the desired watering can.
And as a result, I somehow quickly made two such watering cans, so that we have been using them for about a month and a half. At the same time, they showed themselves very well.
This is how a large watering can looks like, with a capacity of five liters.
And next to her is another – a three-liter watering can. 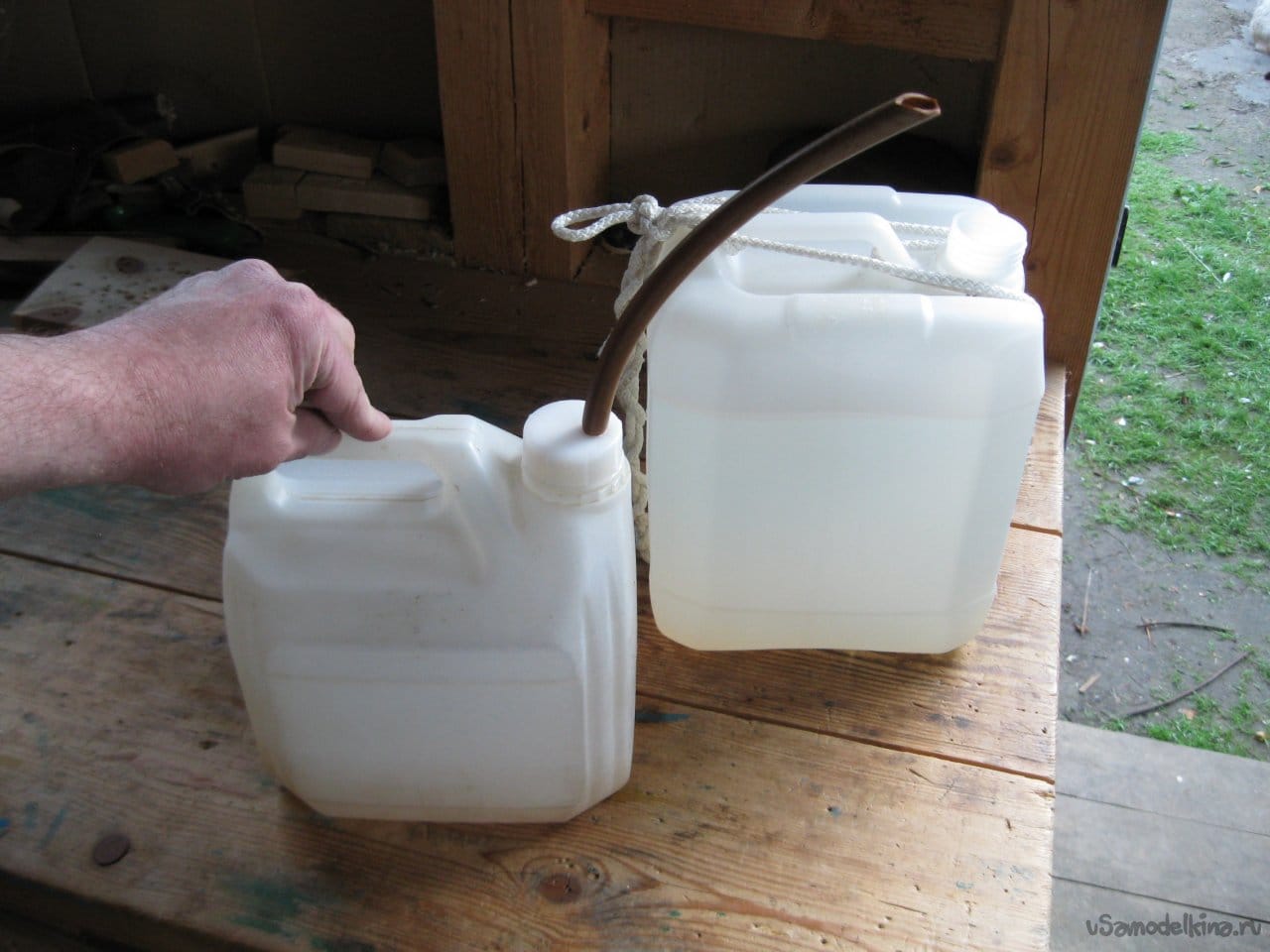 Since my experience may be useful to someone, below, I will describe in detail the process of making these watering cans, which, by the way, is quite simple.
So, to make these watering cans, I needed the following accessories:
Materials:
• Two plastic cans with a capacity of 3 and 5 liters.
• A lid that fits both canisters.
• A piece of rubber hose 20-25 cm long and 11-12 cm in diameter.
• Strong rope about three meters long.
Tools:
• Electric drill .
• Drill for metal with a diameter of 4 mm.
• Drill for metal with a diameter of 9.5 mm.
• Awl.
• Scissors.
The procedure for making watering cans.

The whole process of making watering cans, in fact, consisted of two stages.
At the first stage, I prepared all the necessary materials and tools, but most importantly, I picked up two plastic cans with a capacity of 3 and 5 liters with a lid that fit both of them. 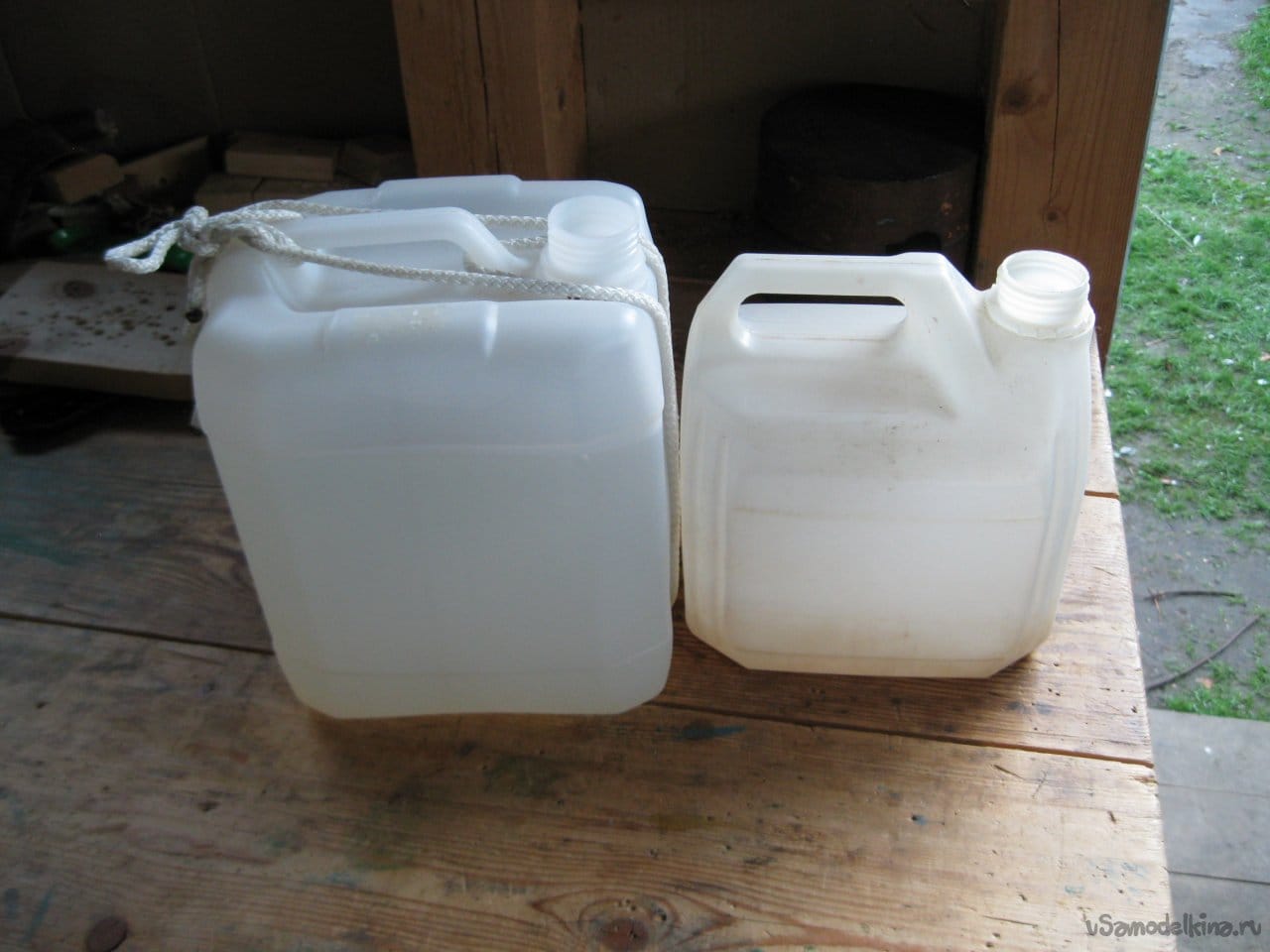 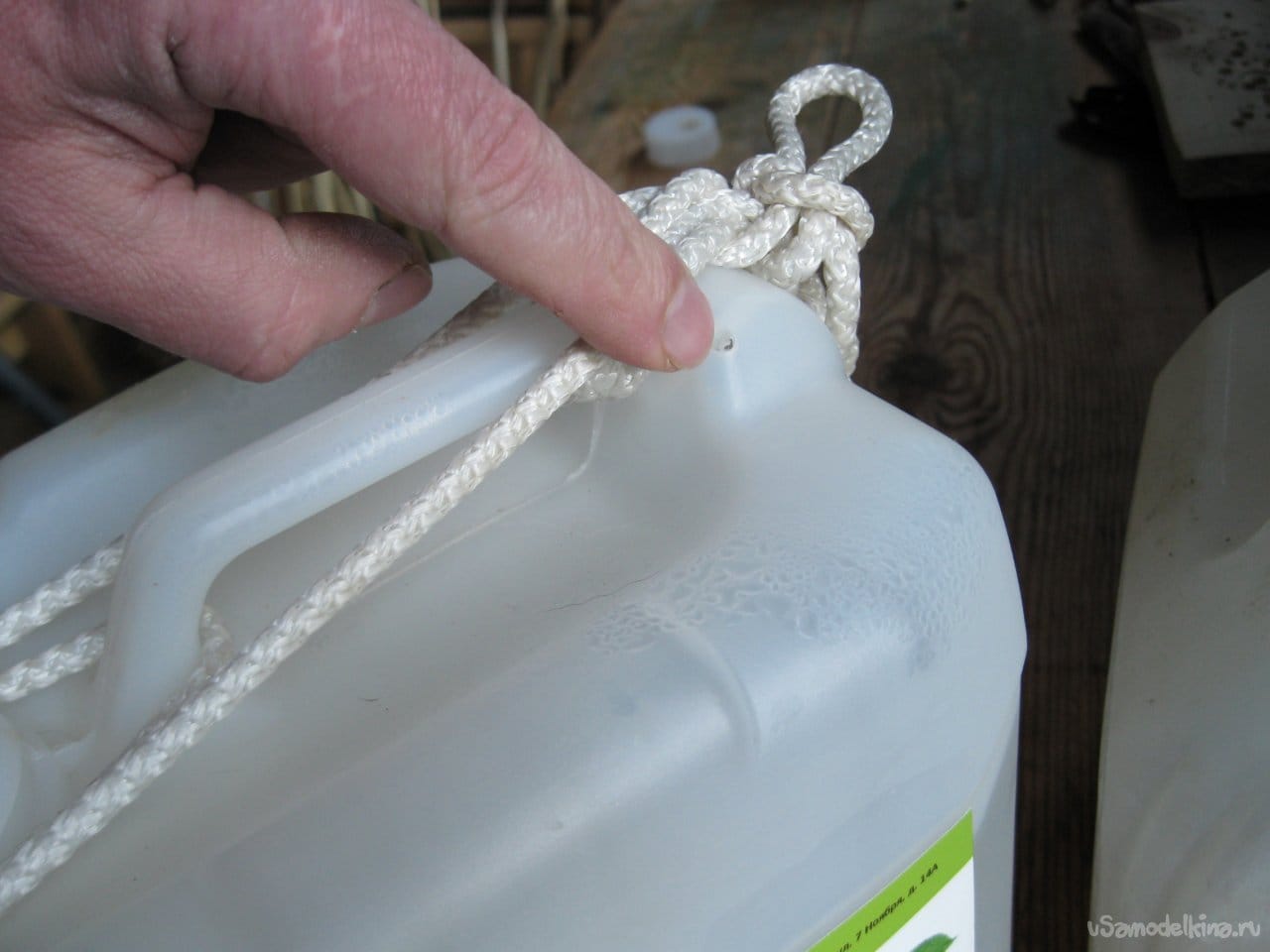 I made two holes for reliability, because during watering, when you hold the canister with your hand by the handle, one of the holes can be closed by your hand. 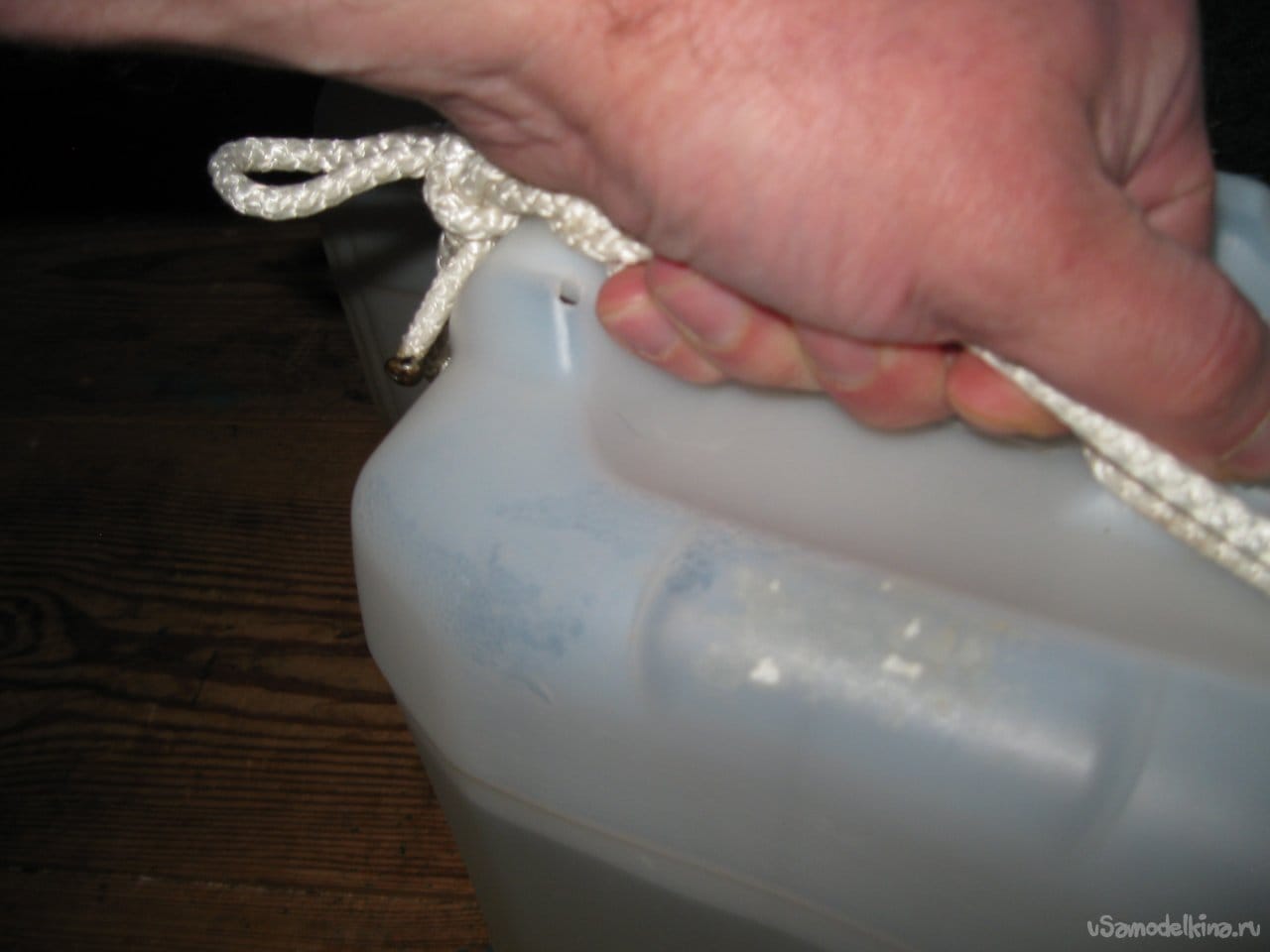 Step 2. Using a drill with a diameter of 9.5 mm, I drilled a hole in the lid to install the spout, which will serve as a piece of rubber hose. 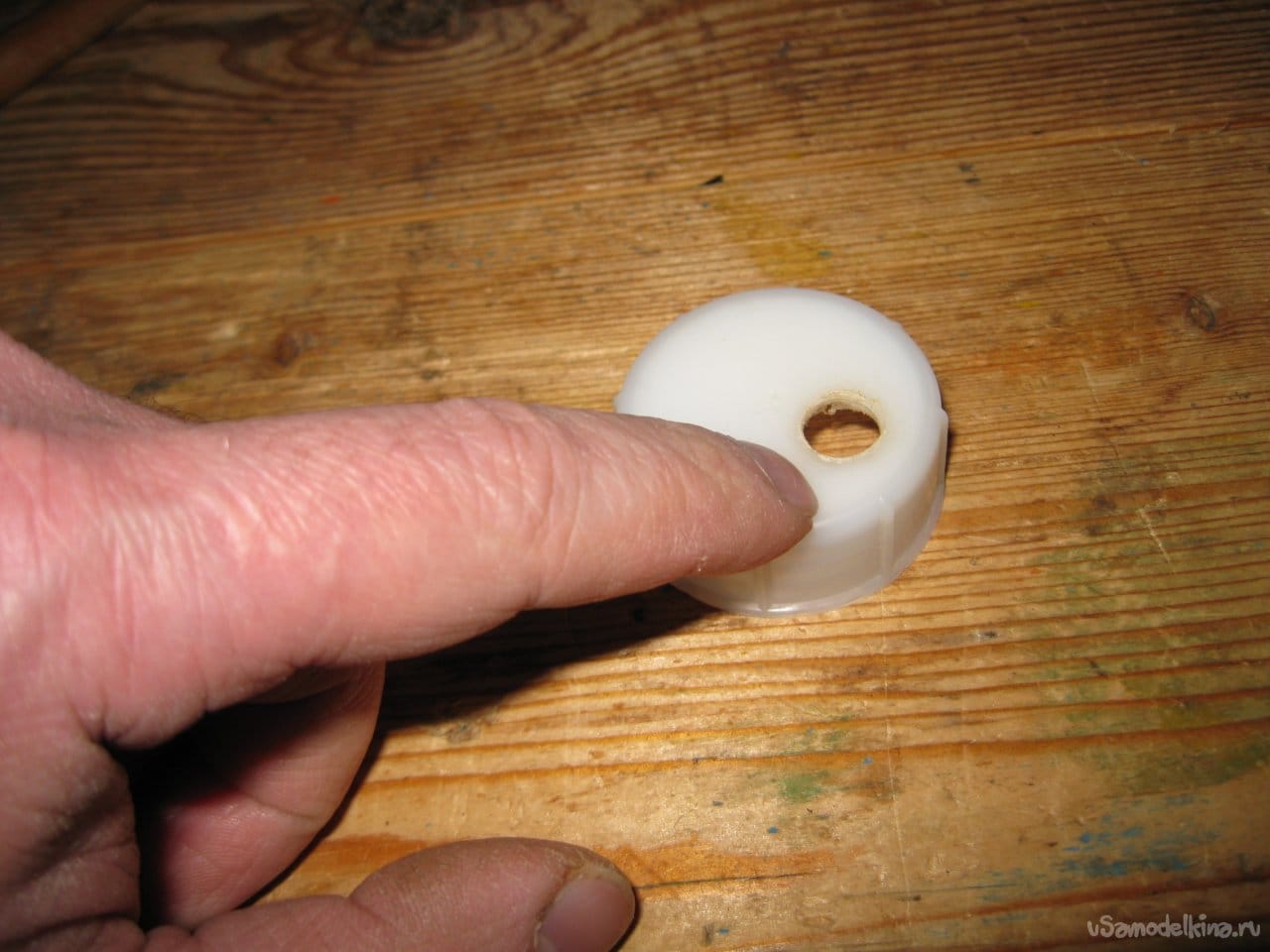 Step 3. Using scissors, I cut off a piece of rubber hose, about 20 mm long, and installed it in the hole in the lid.
It should be especially noted that I specially made a hole in the lid, 1.5 mm in diameter, less than the diameter of the rubber hose. Thanks to this, the section of the hose was installed in the hole very tightly, so that it did not need to be sealed in any way.
Step 4. Since the large canister with a capacity of five liters was inconvenient to hold when watering because of the small top handle, I decided to make an additional handle out of rope. 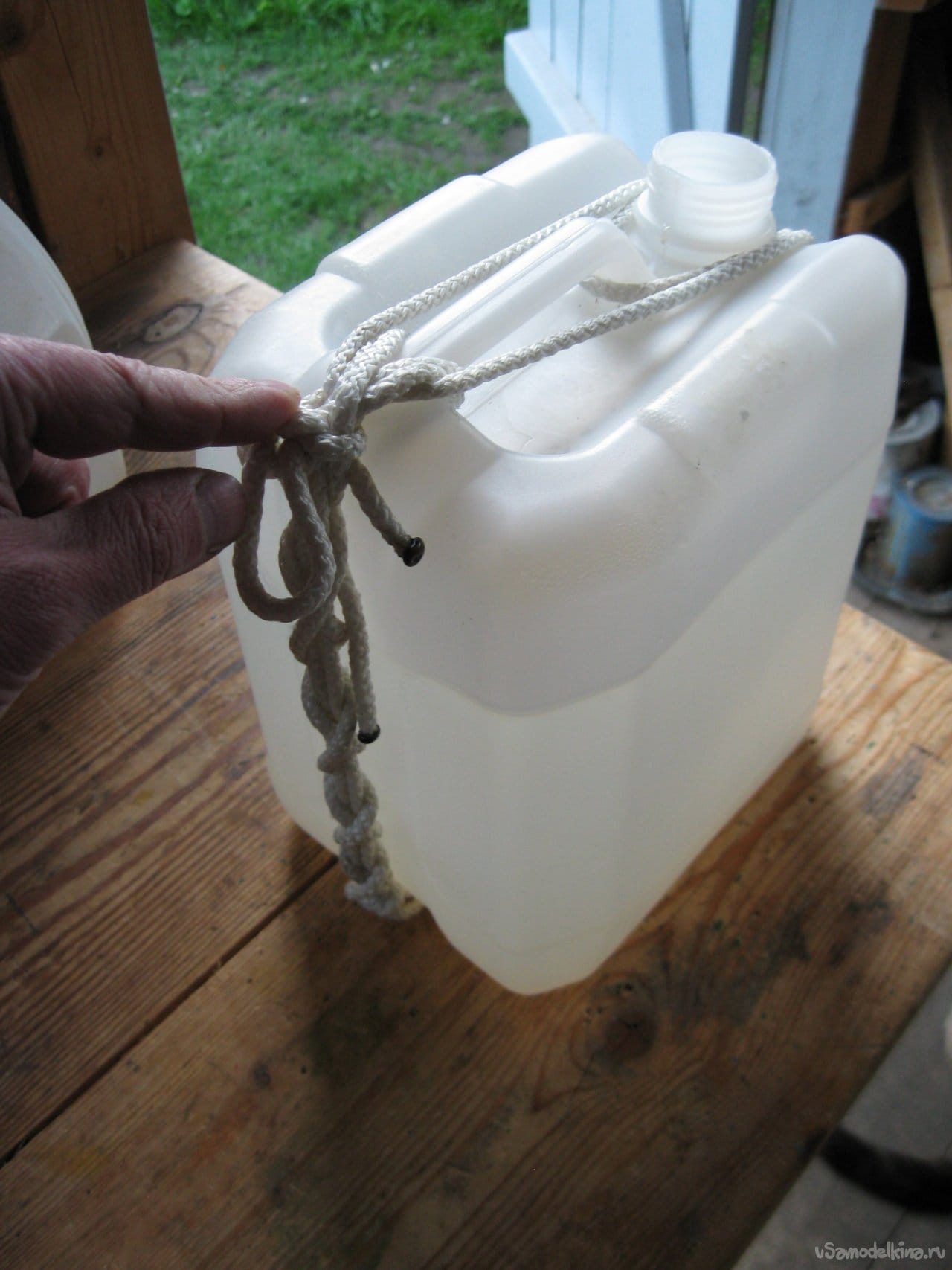 And, to be honest, I did it impromptu, inventing it right on the go.
And it turned out like this:
First, I wrapped the rope around one end of the canister handle. 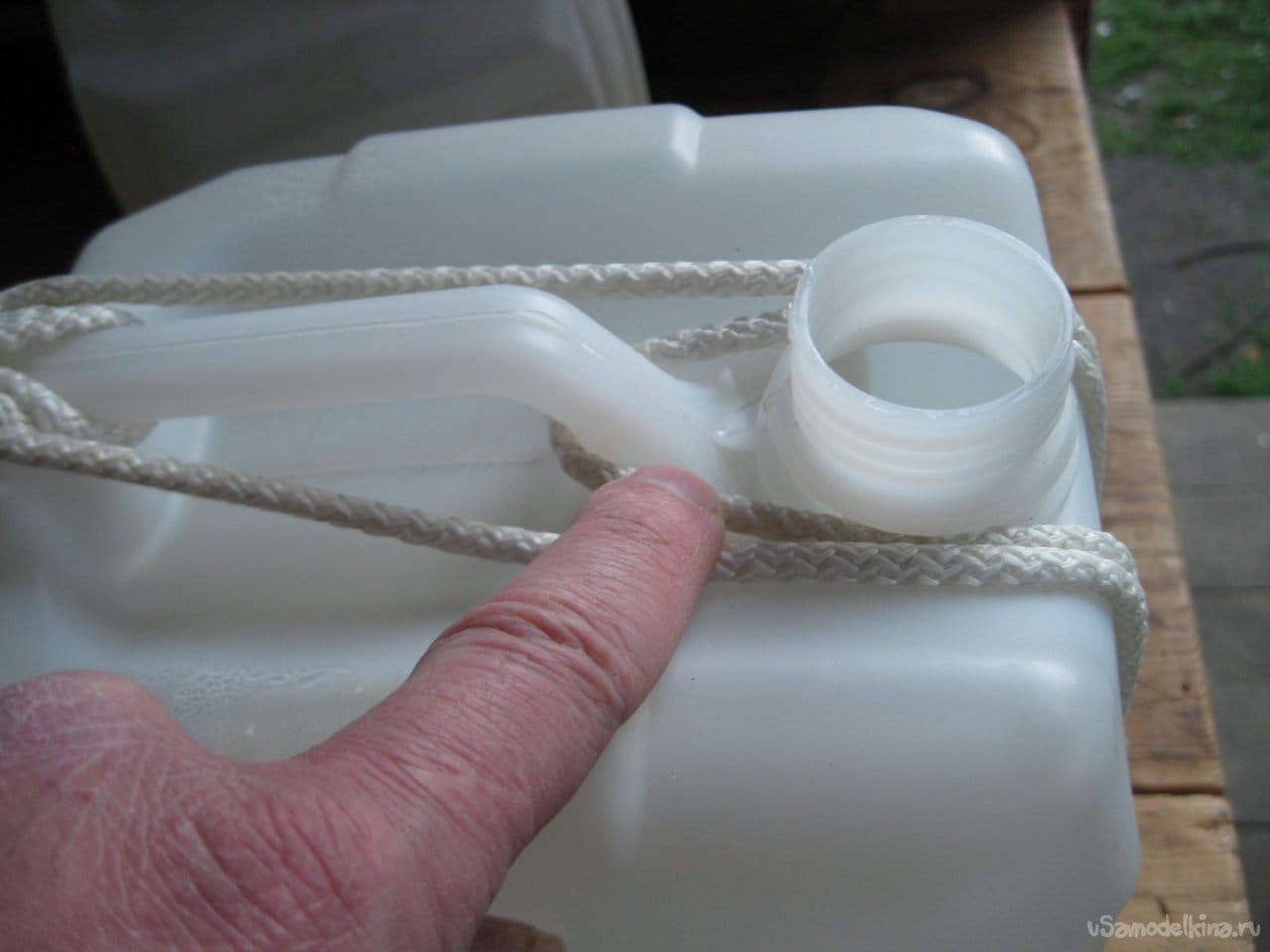 Then he pulled the rope down and stretched it under the bottom of the canister, fortunately there was such a chute there. 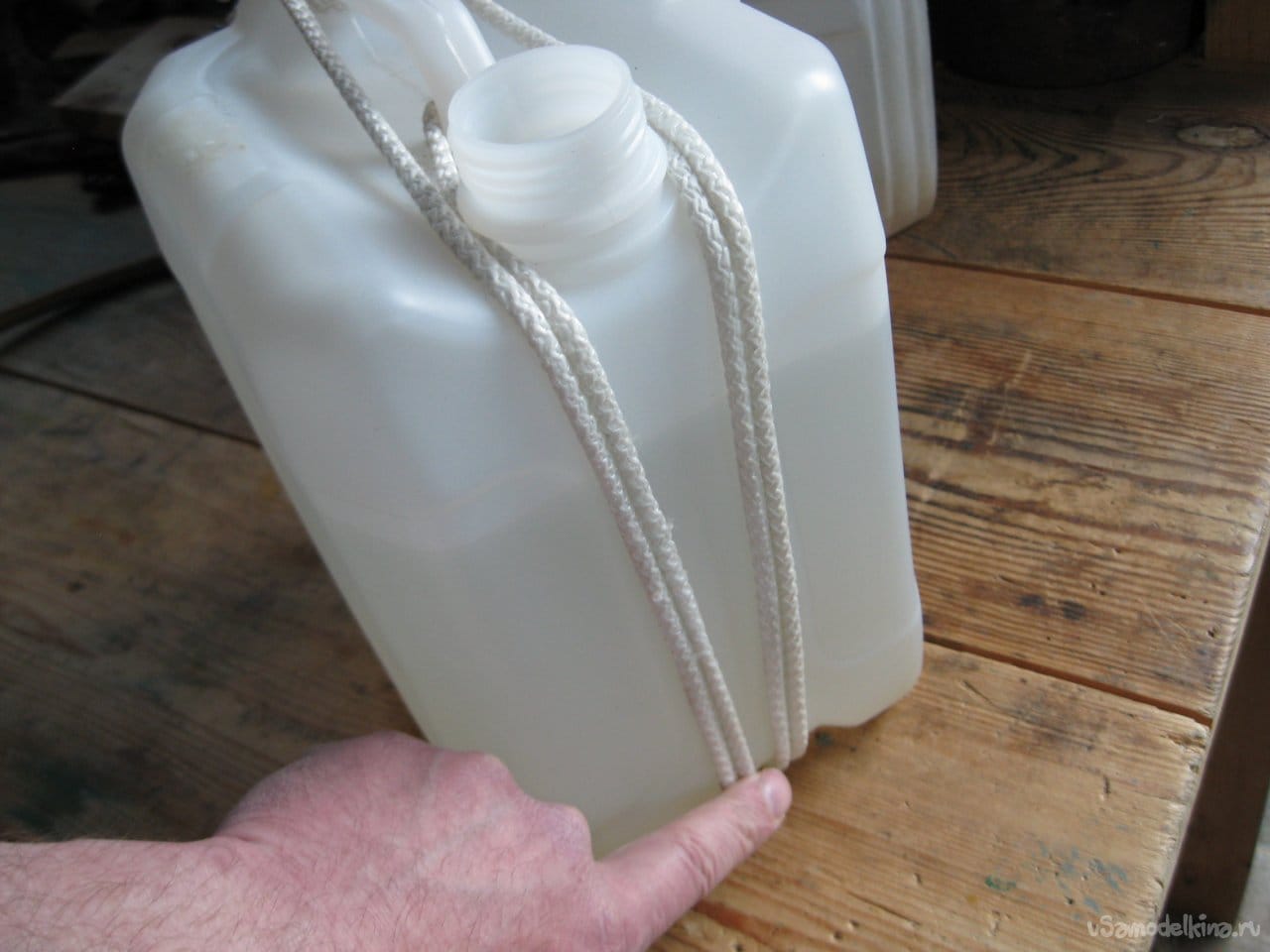 Then he wrapped the ends of the rope around the other end of the canister handle and wrapped them around the two already stretched parts ropes to make the handle more grippy. 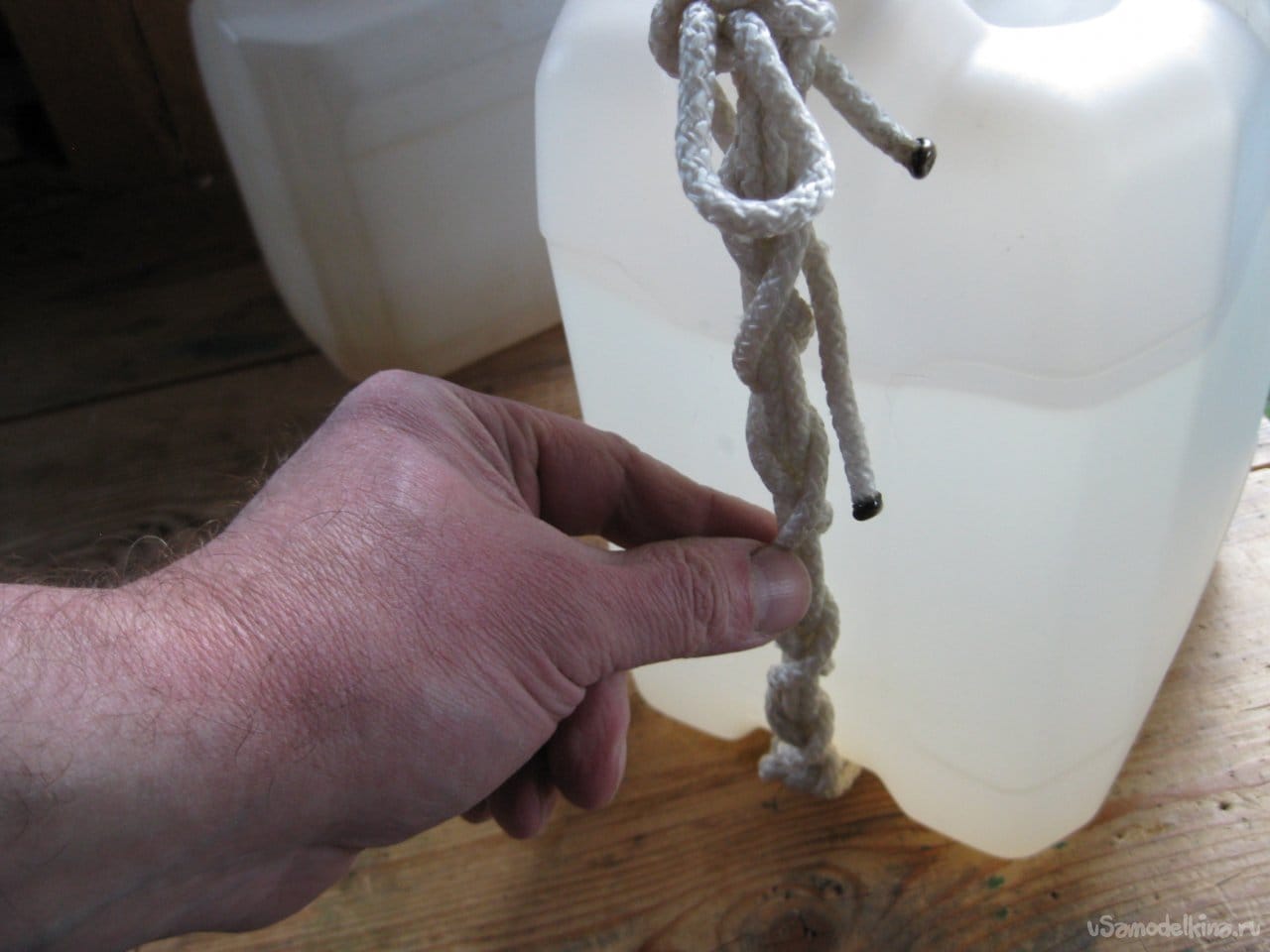 And then again wrapped the two free ends of the rope around the canister handle and tied them in a knot. 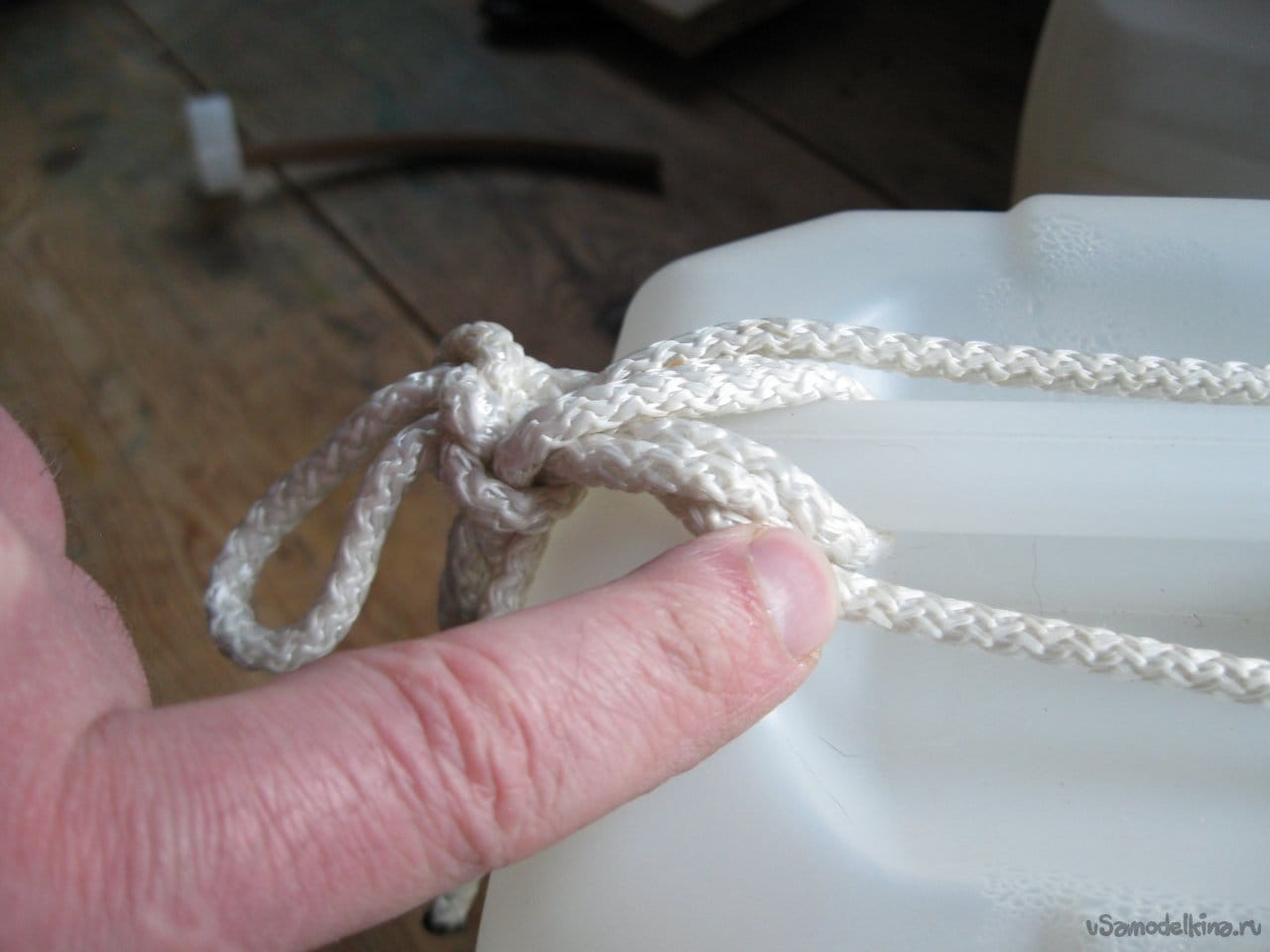 And as a result, two of my homemade watering cans with an adjustable spout were ready ! 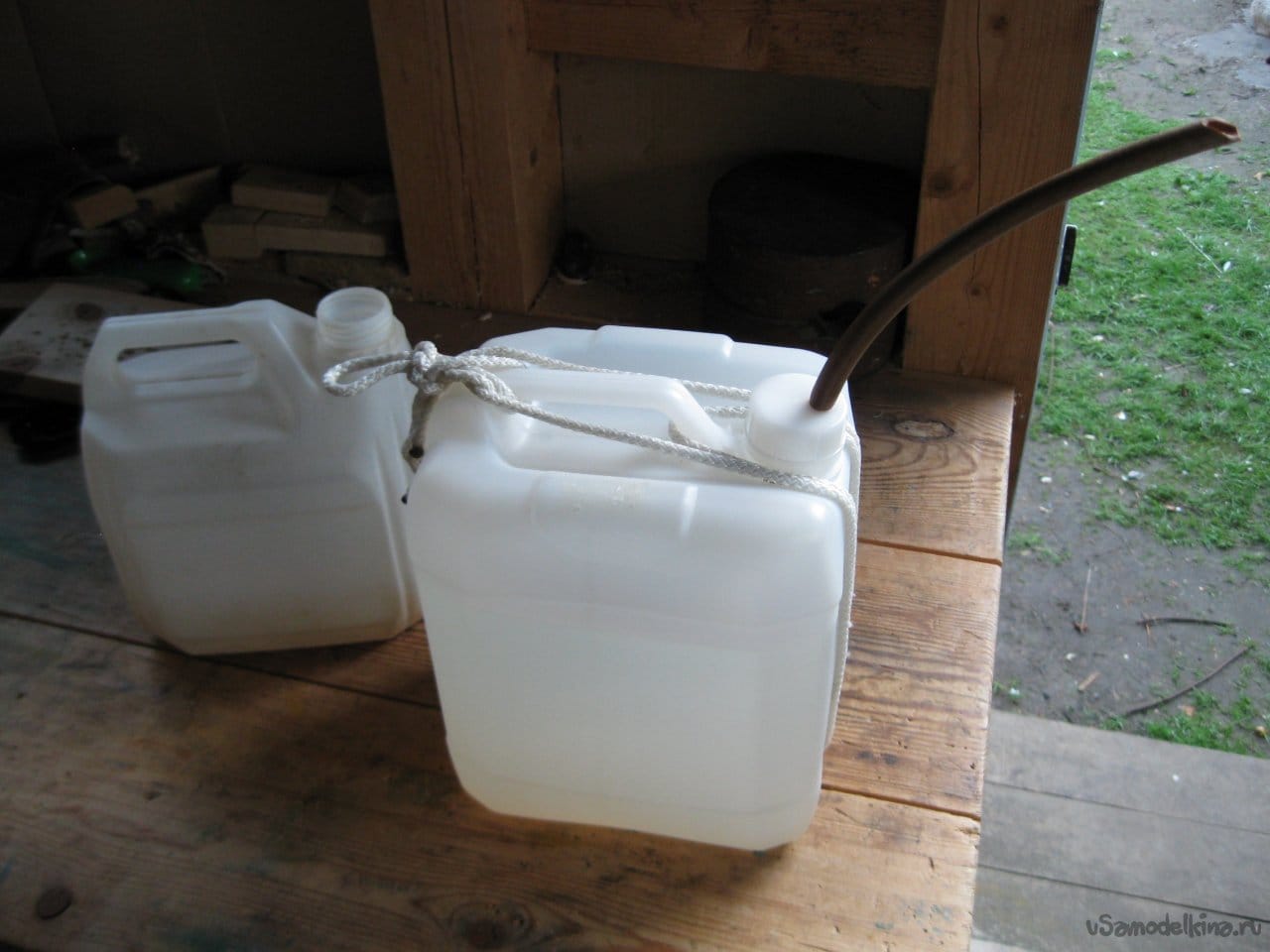 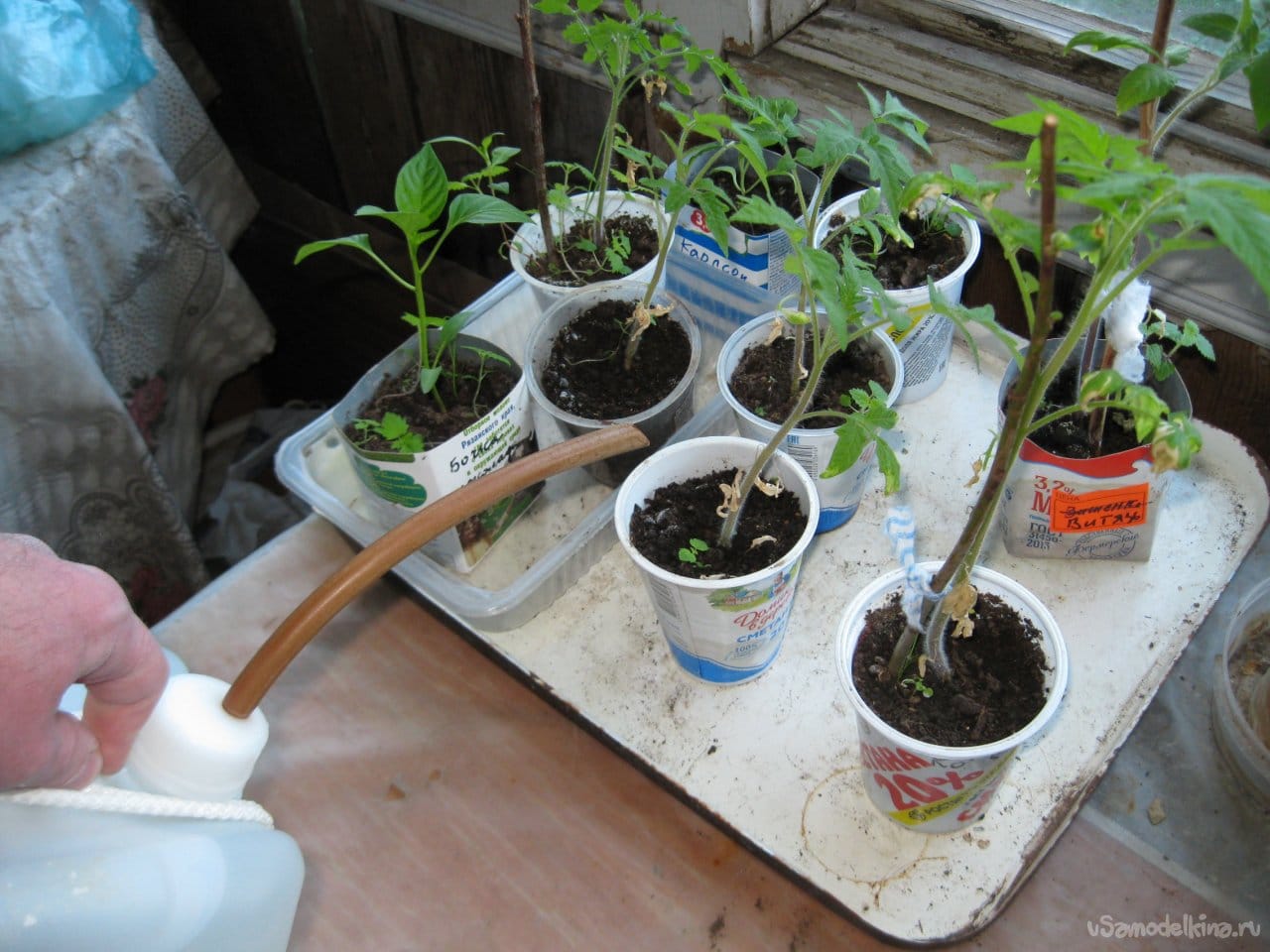 So if one of the gardeners has a question from what to water the seedlings, then I can recommend making the same watering cans as mine.
Well , and I finish here and wish all my colleagues homemade health and good luck in their work!

Machine (from chainsaw and ladder) for sawing logs

Notch for round metal pipes