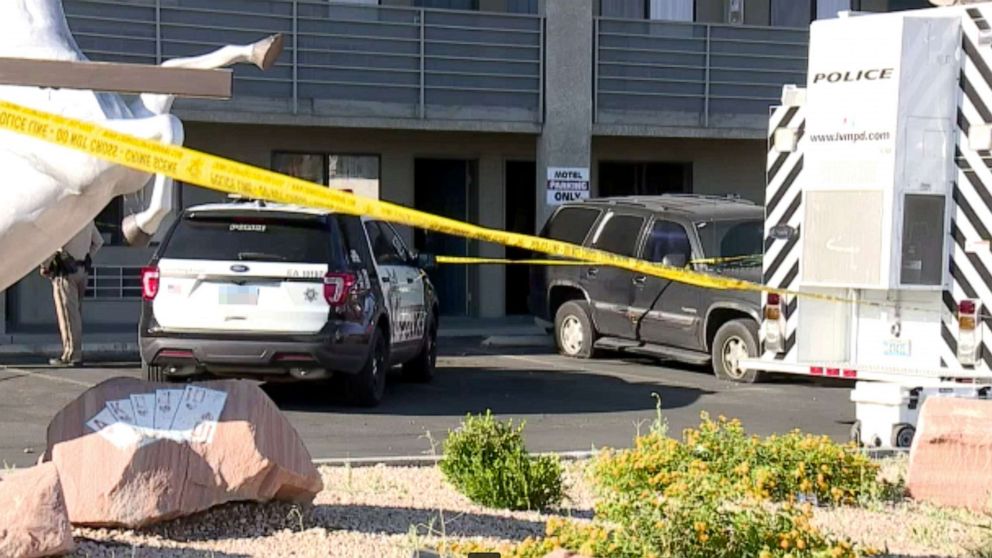 A 29-hour barricade situation at a Las Vegas motel ended safely after an allegedly armed suspect burrowed through a wall and held hostage a babysitter and child.

The situation began around 10:30 a.m. Wednesday, when a police officer found a stolen motorcycle and car at a motel south of the Las Vegas Strip. While recovering them, a man wearing a motorcycle helmet tried to get on the bike and “flee the scene,” Las Vegas Metropolitan Police Department Deputy Chief Sasha Larkin said during a press briefing Thursday.

During an ensuing struggle, the officer noticed the suspect — later identified as Antionio BarryEdwards, 24 — had a handgun in his vest shirt so he “disengaged, creating space,” Larkin said. The suspect then retreated into his motel room, police said. At that point, crisis negotiators and a SWAT team were called to the scene and officers began to evacuate the motel as a precaution.

Unbeknownst to the officers, BarryEdwards used a hammer and saw to make a hole in the wall and went through it into the neighboring room, where a woman and child were inside, and allegedly fired toward officers, according to Larkin.

“He was able to fit through that hole that he created in the wall, go into the neighboring apartment and unfortunately, took the female babysitter and 4-year-old little boy hostage,” Larkin said.

The SWAT team and negotiators on scene began speaking with the suspect via cellphone. BarryEdwards allegedly said he was holding the two hostage and “they were not free to leave,” Larkin said.

After about two-and-a-half hours of negotiations, the boy was released, police said. Officers reportedly brought him to a nearby bar for shelter, employees told Las Vegas ABC affiliate KTNV.

“That was shocking and obviously emotional to know that a child was being put through that,” Stephanie Najera, bar manager at the Rusty Spur Saloon, told the station.

The woman was then held for another 24 hours before being allowed to leave, police said. Two hours after that, BarryEdwards was taken into custody.

“It should be noted that extreme care and patience and de-escalation was used throughout this entire incident,” Larkin said. “This is the kind of thing that the LVMPD SWAT team and negotiators train for and prepare for.”

“We are thankful in this event that nobody was hurt, and that the officers did not have to use deadly force to bring this incident to safe resolution,” she added.

BarryEdwards faces multiple felony charges, including kidnapping, assault with a deadly weapon, possession of a stolen vehicle and carrying a concealed weapon without a permit. He was scheduled to appear in court Friday. Court records did not list any attorney information.

St. Louis requires masks for everyone amid rising Covid-19 cases