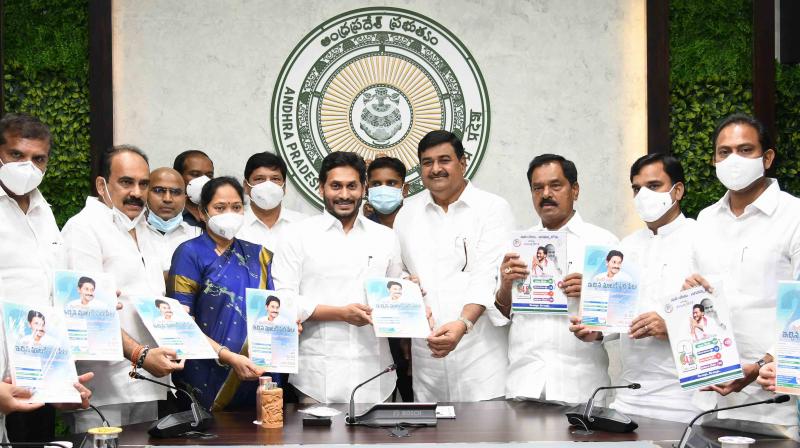 VIJAYAWADA: Chief Minister Y.S. Jagan Mohan Reddy said that out of 1,64,68,591 households in the state, 1,41,52,386 households were benefited by any one of the schemes of his government.

The Chief Minister on Sunday released a letter titled ‘Rendo Yeta Ichhina matake pedda peeta,’ (Second year too, prominence to promises made) and a document ‘Maliyedu – Jagananna Thodu, Jagananna Manifesto 2019’ on the occasion of completion of two years of governance. He said two documents would be shared with every household through volunteers. One is a letter written to the women in a family which would have details of schemes benefited by the family and the other includes details of the election manifesto promises that were fulfilled in the last two years of governance. He said he considered the election manifesto as ‘Bible, Quran and Gita’ and worked to fulfill every promise in it.

He expressed satisfaction at the performance of his government in the last two years. He said an amount of Rs 95,528 crore was directly transferred to the accounts of people through the Direct Benefit Transfer ( DBT) schemes and another Rs 37,197 crore aid was extended indirectly through other various schemes such as YSR Aarogyasri, Jagananna Thodu, Gorumudha, YSR Sampoorna Poshana etc., totalling Rs1.31 lakh crore. He said a total of Rs 1.3 lakh crore was spent transparently, without giving any scope for corruption. Even scheme was delivered right at the doorstep of beneficiaries.

The CM said all the schemes were successfully implemented with the help of village/ward volunteers, employees of village/ward secretariats and government employees including District Collectors. He said he was proud to say that 94.5 per cent of the election manifesto promises were fulfilled. He said women were the beneficiaries of 66 per cent of the welfare schemes and all these details would be shared with every household through volunteers.

Reddy thanked everyone for their support during the last two years and prayed to the god to give strength to fulfill all the dreams in the coming three years.