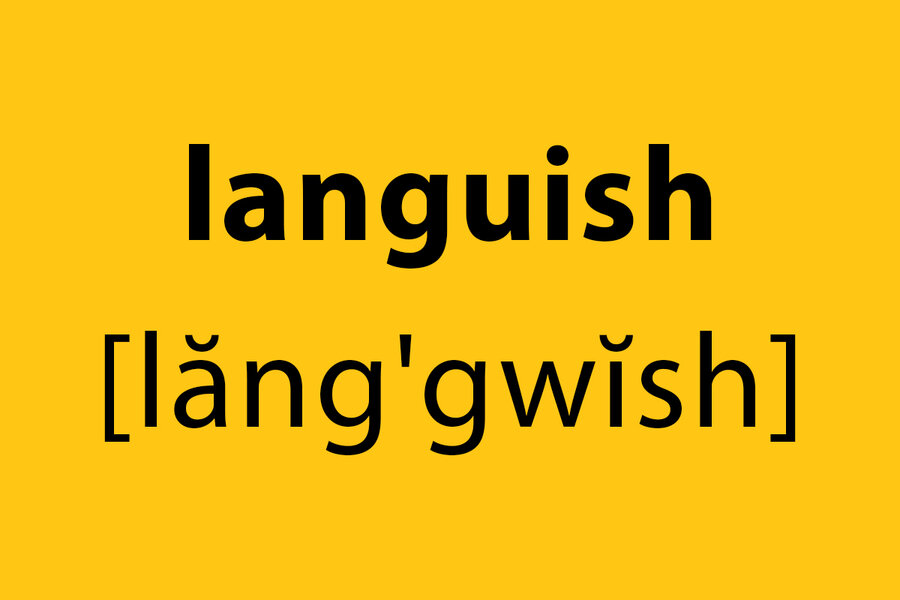 An article in The New York Times recently suggested that languishing – a state of being distracted, feeling unmotivated, muddling through one’s days – might be “the dominant emotion of 2021.” It prompted etymological speculation in the online comments. “Why is the word anguish inside of languish? Is l for ‘lazy’?” a reader from Wisconsin wondered. Another from New York joked that languish was just anguish but “more French. OK! l’anguish it is.”

It may seem that these two words must be related, but etymologically they are more like opposites than cousins. Languish comes from the Latin verb langue¯re, “to be faint, feeble … idle, inert,” which derives from the Proto-Indo-European (PIE) root *sleg- (“slack”). Languish’s roots suggest a lack of tension, and its English relatives are floppy words such as relax, slack, lax, and possibly even sleep. It can also be defined as “to become feeble” (“the plant languished in the heat”) and “to suffer neglect” (“the bill languished in the Senate”), according to Merriam-Webster.

While languish is loose, anguish is constricted. It comes from the Latin angustia (“narrowness, lack of space”) and, further back, from the PIE root *angh- (“tight, painfully constricted, painful”). Appropriately enough, its English relatives include anger and anxiety.

In more roundabout ways, both comments on the Times article hit on something true. Languish did arrive in English from French – Anglo-Norman, to be exact – along with pork and beef and other such high-status words during the Norman Conquest (as we discussed in the May 10 issue). Anguish arrived in the same way at the same time, though, so one isn’t any more French than the other.

And just as the Norman pork and beef joined the Old English swine and cow, English already had a Germanic word that did much of the same job as languish – sloth. Today we associate sloth with laziness; Merriam-Webster defines it as “disinclination to action or labor.” In the Anglo-Saxon and medieval periods, it bore a closer resemblance to languishing. Sloth was used by early theologians to translate the Greek acedia (“without care”), described by medievalist Siegfried Wenzel as “exhaustion and listlessness caused by the monotony of life and the immediate surroundings.” Acedia affected desert-dwelling monks, who had committed themselves to solitary lives of prayer but sometimes had difficulty feeling the spiritual joy that was supposed to accompany their devotion.

So while the “l” in languish doesn’t stand for “lazy,” the two aren’t semantically unrelated. However interesting languish and anguish are as words, though, I hope if there’s a dominant emotion of 2021, it’s a different one from Norman French – how about comfort or delight?