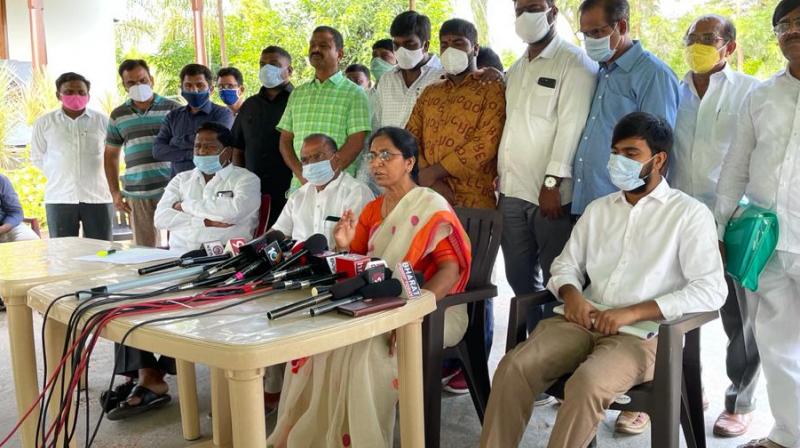 HYDERABAD: Retorting strongly against the allegations of land encroachment, Etala Jamuna, wife of former minister Etala Rajender, said they had done nothing wrong in acquiring land where she has a poultry hatchery unit.

Addressing the media along with her son Nithin at her Shamirpet residence on Sunday, she dared Chief Minister K. Chandrashekar Rao to come for a discussion on who had become rich after the formation of Telangana state. She asked him to provide affidavits from 2004, adding that she was ready to discuss her properties.

Turning emotional, she said she had bought 46 acres of land for a modern hatchery unit in Masaipet. As a woman, she said, she ran poultry hatcheries and employed hundreds of people. Still, false cases were filed against her instead of providing assistance.

Condemning the false propaganda that 100 acres of land belonging to the poor and vulnerable had been occupied by her, Jamuna challenged the authorities stating that she was ready to face any action if she had done anything wrong. She also asked the officers to admit their mistakes and apologise to her and family.

Jamuna said that in 1994, they bought lands in Devaryamjal village and set up godowns there. She recalled that the earlier governments had made several attempts to evacuate the godowns. She questioned the Chief Minister as to why he had made false allegations against her and her family.

The godowns were built in accordance with all regulations in the then undivided Andhra Pradesh, she said and added that the government had forcefully vacated the godowns.

She also recalled how the building of the Namaste Telangana newspaper which belongs to Chandrashekar Rao was built on the loan taken by mortgaging their lands in Devaryamjal. How then was Chandrashekar Rao now alleging that they were occupied lands.

The mystery of ‘Havana syndrome’

Nearly every household has got state benefits in 2 yrs: CM Jagan