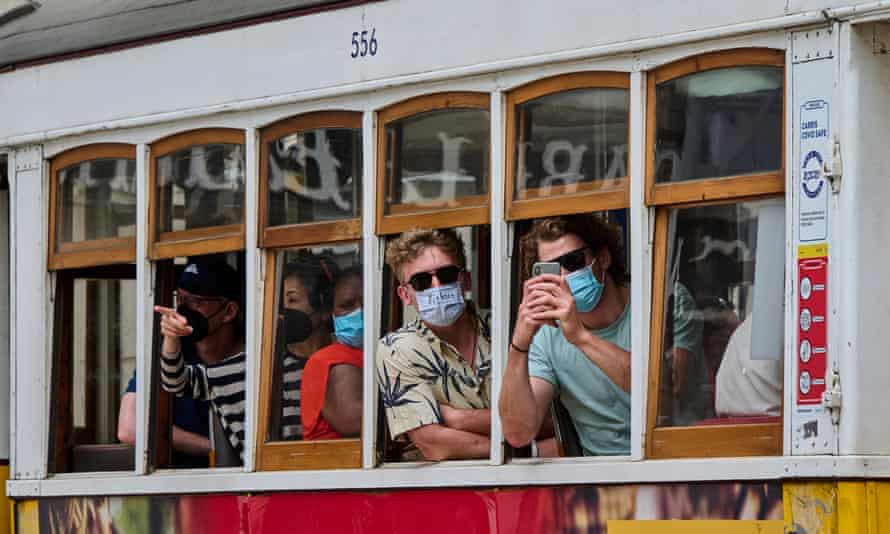 People in England are unlikely to get the go-ahead for quarantine-free travel to major tourist destinations until days before the school holidays, with UK ministers considering reimposing restrictions on those returning from certain green list countries.

A source said ministers were set to discuss whether Portugal, given its uptick in cases, would remain on the green list, which allows travellers from those countries into England without having to self-isolate on arrival.

Boris Johnson warned travellers on Wednesday that countries could have restrictions reimposed over the summer, sparking fresh fears of a repeat of last year’s travel corridor chaos.

The government is set to announce revisions to the travel traffic-light system on Thursday, but Whitehall sources expect just a “handful of new places” to be given quarantine-free travel – few of which are tourist destinations.

It comes after the EU delayed putting the UK on a “white list” of countries from which non-essential travel into the bloc is approved, because of concerns about the rise in cases linked to the Delta coronavirus variant first identified in India.

Speaking on Wednesday, Johnson issued a warning that countries could be moved on as well as off the list requiring tougher restrictions.

“We’re going to try … to allow people to travel, as I know that many people want to, but we’ve got to be cautious and we’ve got to continue to put countries on the red list, on the amber list, when that is necessary,” he said.

“I want you to know we will have no hesitation in moving countries from the green list to the amber list to the red list if we have to do so. The priority is to continue the vaccine rollout, to protect the people of this country.”

Travel industry experts have predicted that the Canary and Balearic islands could open up to tourism, in what would be a major boost to the sector, but Whitehall insiders said there were significant doubts about putting those on the green list.

There is more optimism about Malta, which only narrowly missed out on quarantine-free travel the last time the list was reviewed. Other European countries that could be moved to the green list are Finland and Poland.

Concerns have been raised about allowing travel to Spanish islands because of the level of air traffic to mainland Spain, as well as their abilities to carry out adequate genome sequencing to spot emerging variants.

Whitehall sources said a number of countries could also be moved on to the red list, which requires hotel quarantine. Holiday destinations that could go on the red list include the Maldives and Seychelles, as well as Bahrain. Another source said that concerns were growing over Egypt, South Sudan and Sri Lanka.

“This is yet more evidence of the dangerous impact of Conservative chaos over travel planning,” he said. “This is causing ongoing confusion over the ‘amber list’ that is resulting in far too many people still travelling to Covid hotspots and mixing at airports, further increasing the risk of variants reaching the UK.

“Ministers need to scrap the ‘amber list’ urgently, to limit travellers reaching the UK and ensure that Border Force have the resources they need to manage arrivals from the ‘green list’ safely.”

The EU is set to examine the UK’s status again on 14 June. The UK’s infection level meets the threshold for inclusion on the list, but concerns over a rising trend, largely driven by the highly transmissible Delta variant, prompted EU ambassadors to be cautious.

Despite the official recommendation to member states, a number of countries in Europe, including Greece and Portugal, have said they will welcome British tourists travelling to them for their summer holidays.

Diplomatic sources said the debate in the UK over whether to fully unlock restrictions on 21 June had fed into the EU’s debate over inclusion on the white list.

A growing number of scientists and government advisers have urged the prime minister to delay the final lifting of restrictions, including the removal of social contact limits and the opening of nightclubs and large events, warning the country is in the early stages of a third wave.

Case rates have risen in Portugal since 7 May, when the country was placed on the green list, from 33 cases to 51 cases per 100,000 on 2 June. Most new infections were reported in and around Lisbon, Reuters reported.

However, the country has taken steps to lift more of its restrictions, including allowing restaurants to stay open past midnight from mid-June, and its work from home order will be lifted.