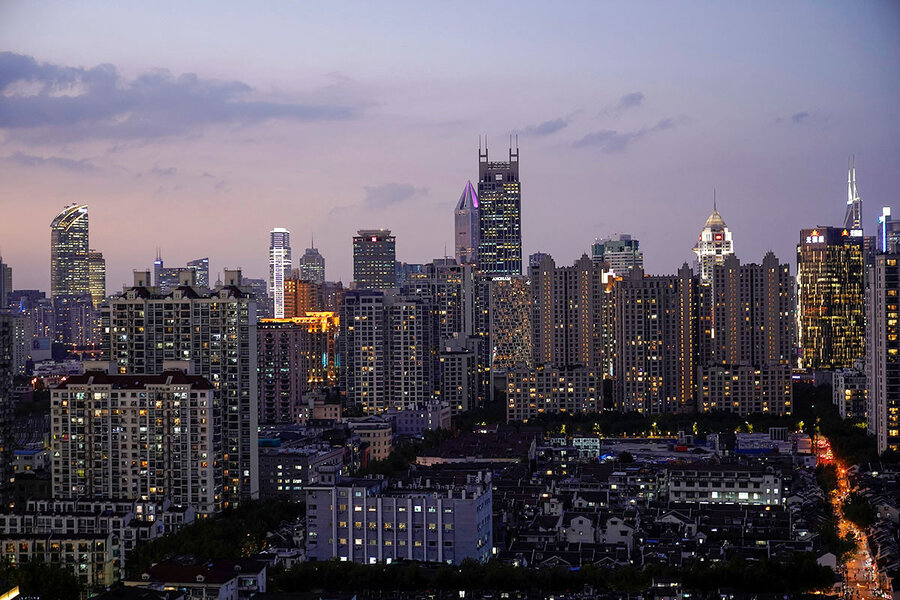 “It’s a tradition for Chinese people – if a man wants to marry, he must first have his own home,” says Mr. Zhang, a Shanghai homeowner and retired entrepreneur who asked to withhold his first name for privacy. “In most of China, it would be a huge loss of face for a man to move into his wife’s home.”

Adam Yao Liu, a China native and assistant professor of public policy at the National University of Singapore, agrees. “It’s pretty safe to say that a house is a sine qua non for marriage for most Chinese today.”

The marriage imperative is only one reason China’s latest push to impose the first nationwide property tax on homeowners is politically touchy. Taxes are unpopular in any country, but in China, a property tax could be seen as challenging the cornerstones of middle-class well-being – family prosperity and continuity. Opponents also question the legitimacy of a property tax, since in China the government already owns the land.

Yet Beijing is gingerly advancing the property-tax plan to try and confront a “gray rhino,” as state media call China’s debt crisis (it’s huge, and everyone sees it coming). After decades of debt-fueled growth, the country’s debt burden totals about 280% of annual gross domestic product. That sum reflects deep institutional flaws in the financial system. It also reflects a political dilemma of the ruling Communist Party, which has based its legitimacy primarily on bread-and-butter issues such as steady economic growth.

“The accumulation of debt is still seen as a short-term way to boost the economy, which is seen as essential for keeping the party in power,” says Bruce Dickson, a political scientist at George Washington University and author of “The Party and the People: Chinese Politics in the 21st Century.”

Yet while the party has favored short-term tweaks and workarounds, it has postponed politically difficult, systemic reforms that are necessary to sustain economic productivity and growth in the long run. The property tax issue represents one test of the party’s willingness and ability to push forward a controversial policy – knowing it could stir unrest.

Property tax “is going to be a tough sell,” says Jean Oi, a professor of Chinese politics at Stanford University and co-editor of “Fateful Decisions: Choices That Will Shape China’s Future.” “Taxing the middle class is something officials are not sure they are able to do. You don’t want local people out there demonstrating,” she says. “It’s a question of political stability.”

“The public has already shown it is prone to mobilize on key issues when it feels they are being challenged,” says Professor Dickson, referring to grassroots protests on everything from environmental hazards to workers’ rights.

Ideas for imposing property tax have been tentatively discussed for years – driven, in part, by local governments’ chronic shortage of steady revenue streams. This spring, officials have again floated proposals for tax reform. The national government will “actively and steadily promote property tax legislation and reform,” Finance Minister Liu Kun said in an article published this month, as officials discussed expanding pilot programs for the tax.

The bottom line, experts say, is a growing bill that – sooner or later – Chinese taxpayers will have to foot. “I don’t think a conventional explosive debt crisis is in the cards,” says Eswar Prasad, professor of trade policy at Cornell University and the former head of the International Monetary Fund’s China division. “A better way of looking at it is … somebody has to pay for all this, and who’s going to pay for it? Ultimately, it is going to be the taxpayer.”

When China’s economy took off in the 1980s, local governments enjoyed a surge of revenues that greatly outpaced those of the central government in Beijing. Those revenues translated into bonuses for local cadres and a big incentive for growth. But that changed after 1994, when Beijing negotiated a new tax-sharing arrangement that shifted the majority of revenues back to the center. This political deal created a gaping shortfall in local government funding that continues today, but it also gave local governments the tools and autonomy to open up new, opaque channels to earn revenue outside the tax system.

Local governments were prohibited from borrowing from banks. In a workaround, they set up entities akin to shell companies called “local government financing vehicles” (LGFV) that acted as middlemen, borrowing vast sums without discipline by arm-twisting local banks, analysts say.

“Local debt is a significant financial risk that is looming because the ownership of this debt is not clear and a lot of this debt has gone to finance projects that are not that productive – so this is something of a hidden problem,” says Professor Prasad.

Beijing has since indicated these local vehicles will be allowed to go bankrupt – and some analysts predict the first default will happen soon. This year Beijing will “probably allow some defaults to happen” to signal the risk, according to Larry Hu, chief China economist at Macquarie Capital in Hong Kong.

A property tax would produce steady fiscal streams for local governments, says Professor Liu, and could dampen widespread housing market speculation. But important policy questions remain, such as whether current owners should be taxed and whether the taxes should vary from place to place. Moreover, he adds, the impact of the tax on China’s heated real estate market is uncertain.

Still, more than 10 years after Beijing first floated the property tax idea, some experts doubt the political will exists to impose the levy – saying officials themselves may worry lest a tax force disclosure of expensive properties they own.

“For more than a decade, property tax has been the equivalent of crying wolf in China,” commented the official China Daily newspaper earlier this year.

As for Mr. Zhang, the Shanghai homeowner, he says he can’t conceive of the government imposing taxes on people for the houses they live in. “The government can’t do that,” he says, explaining that it would run counter to the party’s consideration of people’s basic needs. “It’s not possible that they will force this on people.”

A property tax might not bother wealthy people, says Mr. Fan, but he worries it could further delay his quest for homeownership and marriage. “For someone like me,” he says, “the policy is not good.”