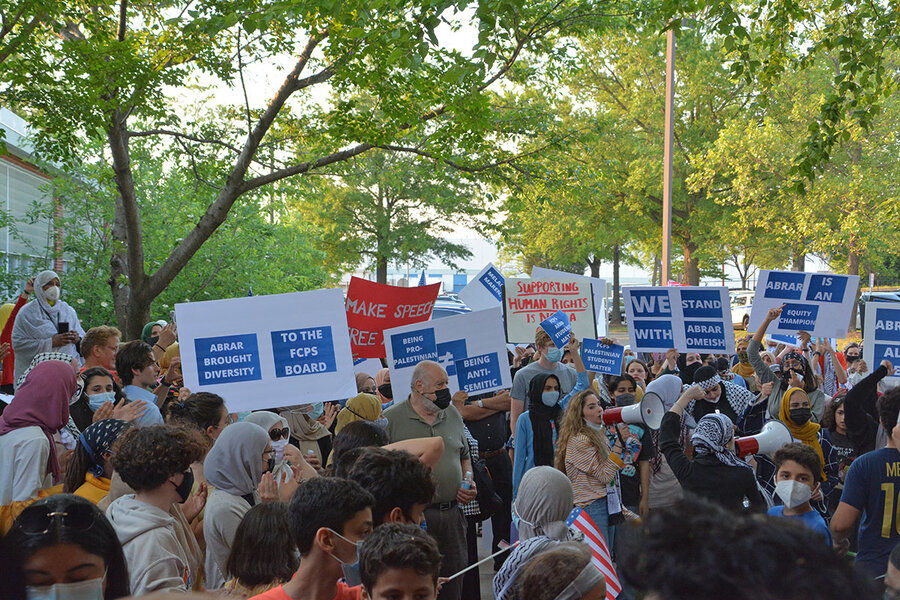 If you’d asked Bonnie Myshrall a year ago who her school board representative was, she probably wouldn’t have been able to tell you. In the voting booth, she never thought twice about board candidates – she’d just follow her party’s sample ballot.

“Yet here I am, firing off emails and starting a Facebook group,” says Ms. Myshrall, a lawyer with a middle-school daughter enrolled in Fairfax County Public Schools (FCPS), a district in northern Virginia.

Last summer, as it became apparent that her daughter’s school would remain online-only due to the pandemic, Ms. Myshrall founded the “OpenFCPS” group to lobby for a return to in-person learning. While she and other parents agreed virtual learning made sense at first, they grew increasingly frustrated by what they saw as the district’s lack of urgency around getting kids back into classrooms, with board meetings often focused on things like renaming schools or implementing an electric school bus fleet.

Parents have long been a coveted political demographic. But the upheaval of the past year has turned many into passionate local activists, who say they will keep advocating long after the pandemic subsides.

“The Titanic is sinking, and they are rearranging the deck chairs,” says Ms. Myshrall. The group is now gathering signatures to recall three board members. None of the three members responded to requests to be interviewed by the Monitor.

After the upheaval of the academic year, it’s perhaps not surprising that school boards across the country have become lightning rods for political debate. As Zoom classes dragged on through the fall and winter – and with many public schools, including those in Fairfax, even now not fully open – heated battles erupted over how to balance the safety of teachers and students against other concerns such as learning loss and mental health.

The clashes haven’t been confined to questions of reopening, either. Increasingly intense debates have opened up over educational content – particularly the anti-racist curricula that many schools implemented in the wake of last summer’s Black Lives Matter protests, emphasizing systemic racism and white privilege. A number of conservative states are passing measures banning the teaching of “critical race theory.” Other states, like Virginia, are embroiled in fights over achievement and equity, including reevaluating gifted and talented programs and accelerated math tracks.

“The priorities are messed up,” says Bethany Wagner, another Fairfax parent. “When your kids are learning from home, and you’re seeing issues and trying to reach out to the superintendent and school board members – and you’re not getting feedback, or the feedback is shallow – it makes you want to pay attention.”

And while it may be school boards in the crossfire now, history suggests the political impact could extend well beyond. Events that give rise to grassroots activism – particularly when driven by strong emotion, as in the case of parents who feel their children are being negatively impacted – often generate broader, and more permanent, movements.

“If [people] get involved in one form of politics, it often spills over and they will be engaged in other forms of political activity,” says David Campbell, an expert on civic engagement at Notre Dame University. The debate surrounding school segregation in the 1950s, he notes, primed many Americans for broader activism in the 1960s.

“This is not the first time we have seen issues around public schools be flash points for controversy,” says Professor Campbell. “You can think of school board politics as the gateway drug to greater involvement across the board.”

At last week’s bi-monthly school board meeting at Fairfax’s Luther Jackson Middle School, hundreds of people showed up hours early with handmade signs concerning various issues. Some were demanding a full reopening of schools. Others were focused on the Biden administration’s American History and Civics Education proposal, which has become caught up in a controversy over schools’ use of The New York Times’s 1619 Project. Still others were upset about a controversial tweet made by one of the Fairfax board members, a young Muslim woman, about Israel’s “colonization” of the Holy Land.

Ironically, many Fairfax parents say they moved to the area because of the schools. Fairfax, the 11th largest school district in the country, is considered one of the best.

“My husband was military, and at the end of our service we could have lived anywhere,” says Saundra Davis, who has two sons in Fairfax schools. “I live in a smaller house than we could have elsewhere so my kids can go to school in this district.”

That made it particularly upsetting for many parents to watch their children struggle this year with online learning.

“He was an early reader; he loves reading about history and science. But I see now that his writing has suffered,” says Ashley, whose son is enrolled in a Fairfax district school, and who requested her last name not be used for fear of retribution from teachers. “Sitting in his room all day disconnected was just so hard. … His behavior has changed.”

Fairfax was also slower than other districts to reopen. Not until late April did the district begin offering four days of in-person learning a week, and for select students only. The move, parents noted, came months after the Centers for Disease Control and Prevention had concluded that in-person schooling did not cause increased transmission.

FCPS has promised a return to five-day in-person instruction in the fall, and Megan McLaughlin, one of the school board’s longest-serving members, says she feels confident things will return to normal.

Still, she says she’s never seen anything like the level of parental involvement over the past few months. During her decade-plus of service, the board has wrestled with other hot-button issues, such as how to teach sex education. But never before has the debate at hand involved such a broad swath of parents or directly affected school employees.

“This was universal,” says Ms. McLaughlin, who is not one of the members being targeted by the recall effort. “Decisions at school board level suddenly become a key focal point of what’s going to happen with your child’s day to day [life].”

Additionally, there have been 24 school board recall efforts against 64 board members thus far in 2021 – including the current effort in Fairfax.

That kind of engagement may very well make its way up the political food chain, says Professor Campbell.

“Because school board elections are low-profile races with low turnout, and the number of voters compared to a congressional district is small, it means a small group of dedicated activists can make a big difference – and that’s part of the appeal,” he says. “It’s not uncommon for people running for Congress to describe how they first got involved in school board politics.”

Miranda Turner, a Democratic lawyer with young children, says she never would have considered running for the Arlington School Board in Virginia before this past year. But frustration over how her area prioritized opening businesses like shops and restaurants before schools led her to throw her hat into the ring.

“We are right outside D.C., and everyone here is so focused on national politics – but it’s the local elections that really have a much bigger impact on your daily life,” she says.

Ms. Turner ended her bid this week after losing her party’s online caucus, but she has vowed to stay active, tweeting: “My advocacy work doesn’t stop here.”

While education wars often play out along partisan lines at the national level, many at the local level insist they don’t see the issues as partisan at all.

The OpenFCPS group is officially nonpartisan and is chaired by one Republican and one Democrat. Along with the satisfaction that comes from feeling like they are advocating for their children, many members say the most rewarding part of their involvement has been working toward the same goal with parents who have different political beliefs.

“What I like about this group is that people share their thoughts, and I don’t agree with all of them, but I don’t feel pressure to ‘cancel’ anyone,” says Ms. Wagner. “I like that we have a shared purpose.”

Many parents, such as Ms. Wagner and Ms. Davis, say they agree that racism is a problem in America, but they believe there is room for debate over how the issue should be taught, and what approaches are developmentally appropriate for young children. More to the point, they say public education faces more immediate problems – such as still-empty classrooms.

Ms. Myshrall says the OpenFCPS group “plans on staying around,” at least until the board is up for reelection in 2023. They plan to rename themselves the Fairfax County Parents Association.

Anna LaNave is a mother of four, with two Fairfax County graduates and two still enrolled in the district, who describes herself as a pro-teacher, pro-union Democrat. She’s going to vote a “straight education ticket” this year.

“People are realizing that we haven’t been paying attention and it’s coming back to bite us,” says Ms. LaNave. “I think this will affect how people vote in local elections for years to come.”

US has provided over USD 500 million in COVID relief to India, says White House

Poll: Majority of Americans believe Jan. 6 Capitol riot was an attack on democracy