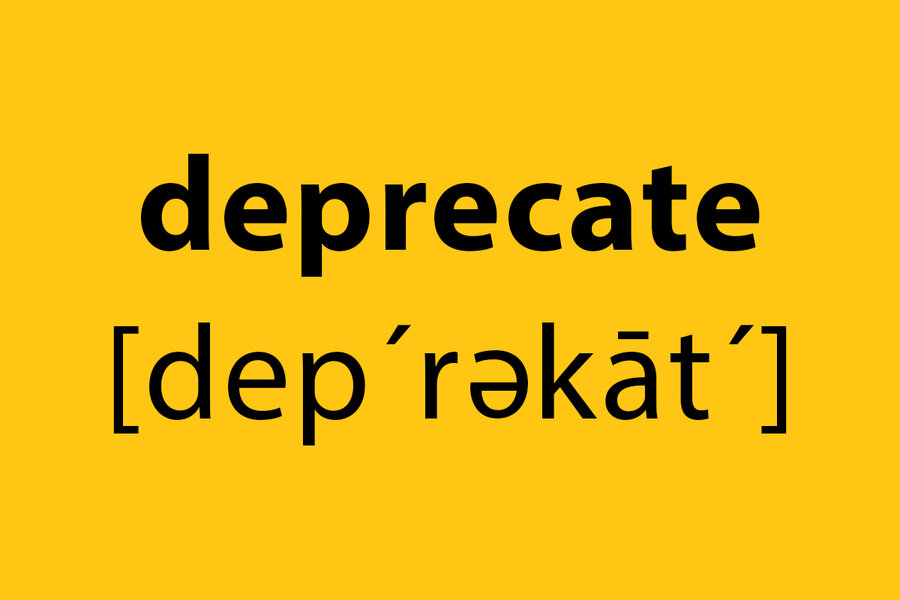 A warning popped up on my computer recently, a message that I needed to uninstall the Flash Player plug-in because Adobe had deprecated it. I imagined a bunch of programmers yelling at a computer, “You’re no good, Flash!” “HTML5 runs rings around you!” I assumed deprecate meant “to belittle,” so Adobe’s usage seemed wrong. As it turns out, I am far from the first person to have been baffled by this word.

Today, deprecate most often appears in its reflexive adjectival form, self-deprecating: “tending or serving to disparage or undervalue oneself,” according to Merriam-Webster. We might make a self-deprecating comment in response to praise.

This usage is relatively new, however. Before 1950 or so, the more common term was self-depreciating. This was also the proper term, according to language mavens. In “Garner’s Modern English Usage,” linguist Bryan Garner draws a firm distinction between deprecate (“to disapprove earnestly”) and depreciate (“to belittle, disparage”). If “her mother deprecated her choice of husband,” Mom thoroughly disapproved of the guy; if “she depreciated him at every opportunity,” she talked smack about him at every turn. Thus, according to Mr. Garner, self-deprecating “is, literally speaking, a virtual impossibility.” Even he admits, though, that it is here to stay, since it’s far more common than self-depreciating.

Depreciate is changing too, and today is rarely encountered outside of financial contexts. It means “to fall in value” – “Sell your GameStop stock before it depreciates!” – or to claim tax deductions “for the wear and tear, deterioration, or obsolescence” of cars, real estate, and so on, according to the IRS.

Adobe’s deprecation of Flash Player is actually closer to the term’s original definition, then, implying a wholehearted disavowal. Just as depreciate has found a niche in finance, deprecate has become a term of art in the software world. When programmers update their code, or companies release new applications, they often deprecate outdated features or products rather than deleting them immediately, which serves as notice that they will stop making updates.

Are some of these uses more correct than others? It seems they are all fine. If you want to say self-depreciating, people might think you’re talking about your stocks, but it’s not incorrect. Self-deprecating was historically incorrect, but is now the default.

If you would like to preserve the original distinction and want a mnemonic, etymology may help. Deprecate comes from the Latin de- + precari (“to pray away”). When you deprecate something, you’d like it gone, especially if it’s a bug-prone software plug-in.