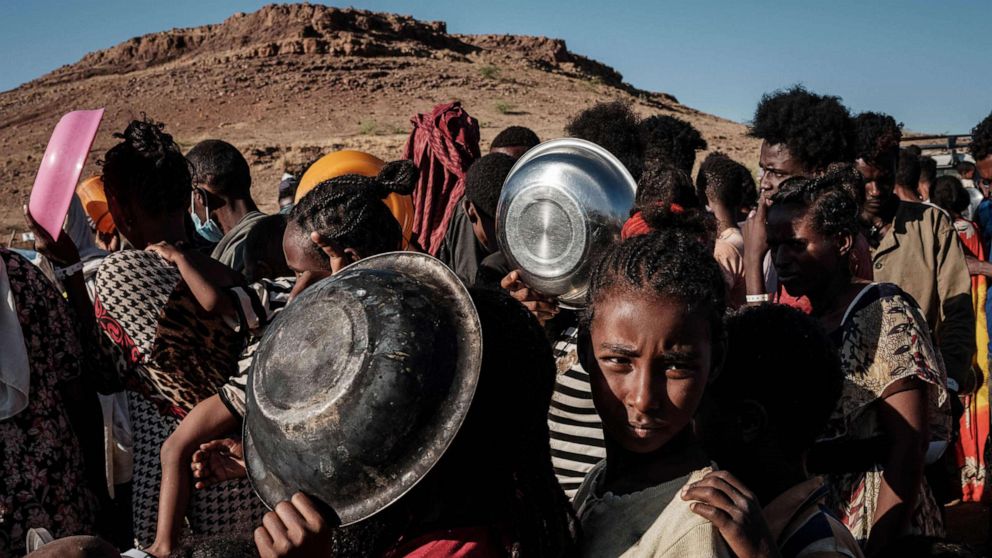 After months of ongoing fighting, reported atrocities, and hindered humanitarian aid, President Joe Biden has finally weighed in directly on the crisis in Ethiopia — issuing a warning late Wednesday about the “escalating violence,” “large-scale human rights abuses,” and the risk of “widespread famine.”

It’s an escalation of U.S. pressure on Ethiopia’s government, a key regional partner. But even after the U.S. announced its first sanctions on Ethiopian officials Sunday, the situation has only further deteriorated in Tigray, the country’s northernmost region.

Several new reported atrocities troubled U.S. officials this week. A humanitarian aid worker who partnered with the U.S. on the ground was killed by soldiers, and troops assaulted a camp for displaced people, beating and rounding up men that were then bussed away, according to an aid group.

Even as he criticized Ethiopia’s government, Biden extended the hand of diplomacy, saying the U.S. is “committed to helping Ethiopia address these challenges” and announcing he would dispatch his special envoy back to the region next week.

The federal government of Ethiopia, Africa’s second most-populous country and a linchpin of security, has been battling Tigray’s regional ruling party, the Tigray People’s Liberation Front since last fall.

Amid tensions over local elections, Prime Minister Abiy Ahmed accused the TPLF of attacking government bases — launching an offensive against the TPLF in November as long-simmering tensions hit a boiling point.

Eritrea, a small neighboring country to the north, has also long been at odds with the TPLF, which used to rule all of Ethiopia. Shortly after fighting began, its strongman president Isaias Afwerki sent troops across the border, who have been accused of some of the worst atrocities.

After nearly seven months of fighting, the conflict has put more than five million people at risk of famine for the first time in Ethiopia in decades, the United Nations warned earlier this week. Over two million people have been displaced, with tens of thousands of refugees fleeing into neighboring Sudan. It’s unclear how many people have been killed, but it is estimated that thousands of people are dead.

While Abiy’s government has said that it secured victory against the TPLF and fighting has ended, clashes continue, according to aid groups. To Abiy’s protests that the TPLF are responsible for any continued violence, Biden seemed to fire back, “Political wounds cannot be healed through force of arms.”

Abiy’s government has also said repeatedly that it is allowing international aid into Tigray, but security forces are blocking humanitarian workers from reaching communities in need, according to U.S. officials and aid groups.

“All parties, in particular the Ethiopian and Eritrean forces, must allow immediate, unimpeded humanitarian access to the region in order to prevent widespread famine,” Biden said in his statement, calling on Eritrean forces to withdraw from the country, as well as regional forces from Amhara, a neighboring province.

“The large-scale human rights abuses taking place in Tigray, including widespread sexual violence, are unacceptable and must end,” Biden added, calling for a cease-fire, an “inclusive dialogue,” and accountability.

While his Secretary of State Antony Blinken has said the U.S. has seen incidents of “ethnic cleansing,” Biden avoided any labels on the atrocities.

But his administration took its first step toward accountability on Sunday when Blinken announced visa restrictions on Ethiopian and Eritrean officials “responsible for, or complicit in, undermining resolution of the crisis in Tigray.” The agency declined to specify who was targeted because visas are confidential by law.

While these are the first sanctions by the U.S., the State Department previously announced that U.S. aid to Ethiopia withheld by the Trump administration over a disputed dam with Egypt would continue to be withheld because of the Tigray crisis.

But hours after the visa bans were announced, there was another disturbing report from Tigray of an attack on civilians late Monday night. Troops forcibly removed “scores of people… from camps where internally displaced people are seeking refuge in Shire,” a Tigrayan town, according to Doctors Without Borders. Others fled the camps “to seek safety,” but now find themselves in an “increasingly precious situation” without “access to basic resources and medical care,” the aid group said Wednesday.

Witnesses told CNN that Ethiopian and Eritrean forces were responsible for the assault on the camps, beating and harassing Tigrayans and forcing men onto buses, the network reported.

“We’ll see if America will save you now!” the network says soldiers shouted, citing witnesses.

Prior to Biden’s statement, she had been raising red flags about the ongoing crisis in recent days, just as her agency’s disaster response leader told ABC News last month that there was an alarming rise in malnutrition levels and obstruction of aid.

“The risk of famine in Ethiopia looms for the first time in over 30 years,” Power said in a statement, adding in a tweet late Wednesday, “We have the aid necessary to help the people of Tigray fight hunger and disease. But Ethiopian and Eritrean soldiers must put down their arms and ensure the delivery of urgent assistance.”

That obstruction of aid has now turned increasingly deadly, too. Power said in her statement that an aid worker who worked with USAID was killed recently — now the seventh humanitarian to be killed since November.

“This recent targeting of a humanitarian worker was clearly intentional and is part of a troubling rise in harassment and violence against aid workers. We strongly condemn this violence and continue to call on all parties to the conflict in Tigray to allow full and unhindered humanitarian access, and to ensure the safety of all humanitarian staff, so that assistance can reach those in need,” she said.

Jeffrey Feltman, a career diplomat who now serves as U.S. special envoy for the Horn of Africa, will return to the region next week “and keep me apprised of his progress,” Biden said Wednesday. But neither his first trip, including meetings with Abiy and Isaias, nor Biden’s deployment of Sen. Chris Coons, D-Del., in March has slowed the conflict on the ground.

Still, Biden’s direct intervention now “is a clear ratcheting up of seriousness and pressure, likely setting the stage for additional sanctions” and a signal “that diplomacy is still an option,” according to Cameron Hudson, a senior fellow at the Atlantic Council.

The questions remain whether Abiy will respond — and whether the situation has spiraled out of his control now.

Lockdown in Telangana extended till June 9 with seven-hour relaxation

The government needs to stamp out scam calls

As world grows desperate for COVID vaccine, US sits on tens of millions of unused doses