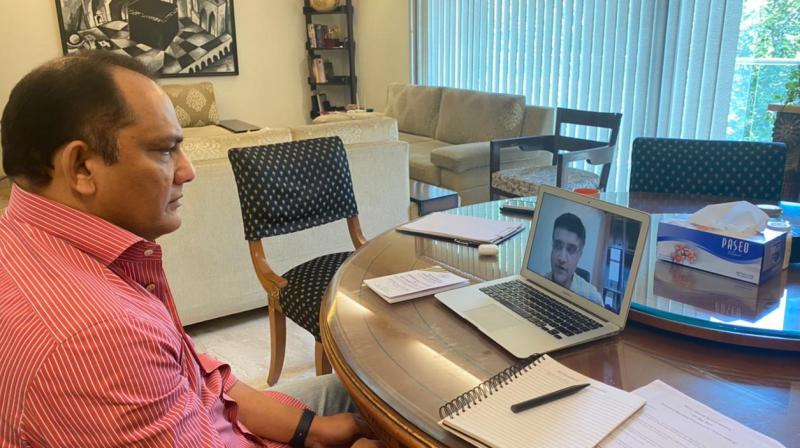 Azhar got the nod minutes before the virtual meeting started at noon, triggering delight in his camp. The BCCI approved Azhar’s nomination after consultation with its legal department as there were two claimants to represent HCA at the meet.

Shivlal was named HCA’s nominee for the BCCI meet at last month’s Annual General Meeting which continued after the president ended it abruptly (after a ruckus) and walked out with his supporters without completing the agenda.

Azhar positioned himself as HCA representative on the basis of being appointed at HCA’s Emergency Special General Body Meeting held in October 2019.
Post Saturday’s meet, Azhar was understandably overjoyed.

“This shows that the appointments made at the (April 11) AGM after I concluded the meeting are not recognised by the BCCI,” he said, while declaring “Truth alone Triumphs” to his supporters.

“The Constitution is supreme,” Azhar asserted, adding, “You have to follow the rules, and I will do everything I can to uphold that.”

“You cannot bulldoze governance with numbers. The AGM and Apex Council meetings have to be convened by me, you cannot make appointments behind my back… they are illegal. It’s doesn’t work like that,” he said in reference to the appointment of Suneel Kante as CEO by the rival faction.

Azhar also vowed to have the appointment process audited by the BCCI. “I will make sure of that. According to rules, the BCCI has the right to check if it was in compliance with the constitutional provisions,” he said.

The former Indian captain insists he is on the right path. “I am legally right, and am doing everything for the benefit of the Association. I want to do something for the HCA, which I represented on my way to the Indian team,” he said.

In the same vein, he assured youngsters that “the local league (which usually starts in June) will not be affected, unless there are Covid-related restrictions.”
“Honing talent is of prime importance. All I want to do is improve facilities for the cricketers. As a young boy I used to travel long distances for practice,” he added.

Shifting to his differences with other members of the Apex Council, Azhar said: “15-20 people have disputes with the clubs and the Ombudsman is the right person to sort them.”

Then came the cold cut. “I am a very small person. I don’t want to dislodge anybody. I just want to do everything that is good for Hyderabad cricket,” he said, adding “The battle is not over yet.”

Suspended IPL to be finished in United Arab Emirates