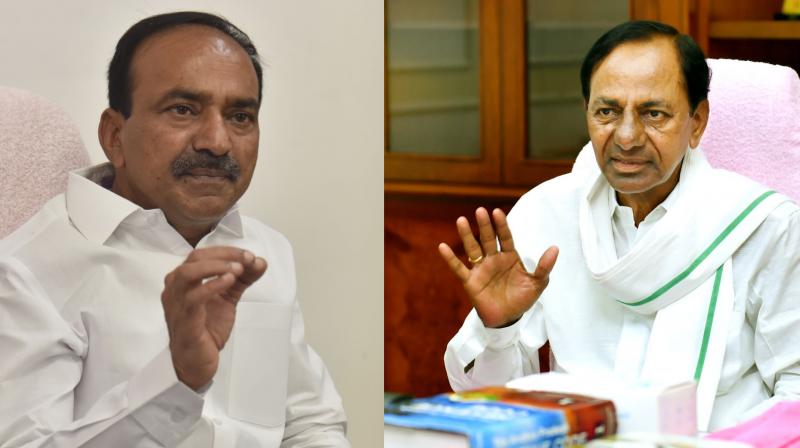 HYDERABAD: The 'political moves' of sacked health minister Etala Rajendar reportedly hogged the limelight at the Cabinet meeting chaired by Chief Minister K. Chandrashekar Rao at Pragathi Bhavan here on Sunday. Though the lockdown extension and Kharif agriculture season were the prime items on the cabinet agenda, political issues were discussed at length soon after the cabinet finished the official agenda.

The Cabinet meeting started at 2 pm and ended at 7 pm. The agenda was completed in two hours. After this, officials were sent out of the meeting hall and the CM was closeted with ministers for about three hours to discuss the political developments against the backdrop of Rajendar's removal from the Cabinet.

Incidentally, Rajendar was leaving for Delhi from Shamshabad airport amid speculations that he would meet top BJP leaders in the national capital and might likely join the saffron party. This triggered a debate on his political moves, at the cabinet meeting.

Chandrashekar Rao reportedly told the ministers that Rajendar had committed several wrongs, both in the government as well as in the party, and he was forced to dismiss the Huzurabad MLA in the best interests of the party. The CM is learnt to have told ministers to ignore Rajendar and asked them not to comment on the issue without permission.

He also reportedly told the ministers that Rajendar joining the BJP would have no impact on the TRS. “The BJP has no future in Telangana and the recent MLC polls, the polls to Khammam and Warangal municipal corporations and the Nagarjunasagar Assembly bypoll proved how the BJP struggled even to retain its deposits, the CM pointed out.

“The performance of the BJP in Dubbak and GHMC elections was only a flash in the pan. The BJP could not retain its own seat in the GHMC bypoll held later for the Lingojiguda ward despite a sympathy wave and the TRS keeping off the poll following the BJP's request,” the CM reportedly said.

The CM told the ministers that the entire ‘leader and cadre’ base of the TRS in Rajendar's constituency Huzurabad have decided to stay with the party and no major local leader or cadre extended any support to former minister so far after his removal from the ministry.

Chandrashekar Rao expressed the confidence that the TRS will win the Huzurabad seat with a thumping majority when the bypoll is held. There was also discussion on disqualifying Rajendar from the Assembly and dismissing him from the TRS if he announced any plan to join the BJP without resigning his MLA post.