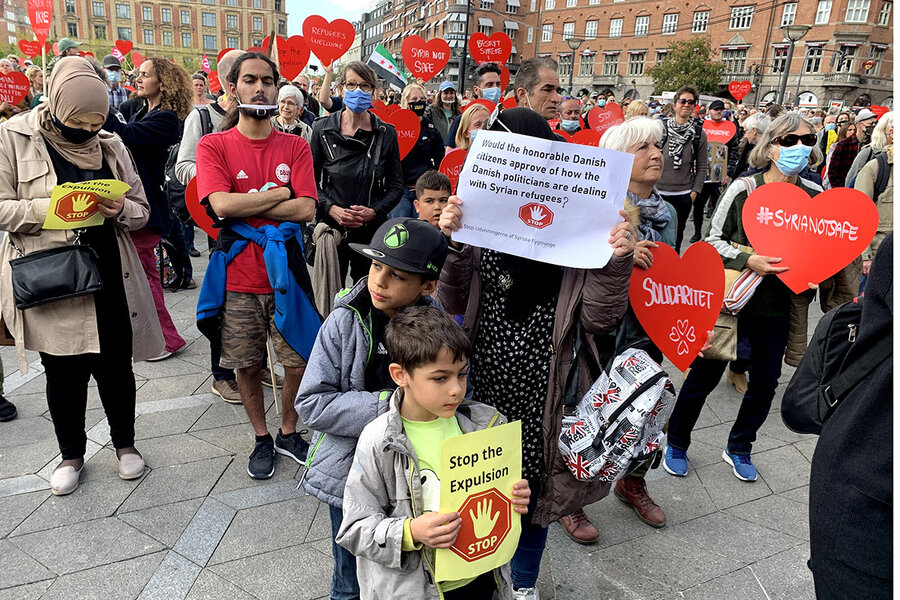 Sabriya struggles to sleep on good days. Now it’s next to impossible. She is terrified the Danish government will eventually send her back to Syria because her residency permit was revoked. If her appeal fails, she will be facing the choice of going back “voluntarily” to the country she fled or residing in a deportation center.

“How can I go back to the regime that turned my children into orphans, displaced us, and leveled our houses with bombs?” the widow asks, stressing that under no circumstances would she return to Syria. “I have no one left there. All my relatives have been scattered and suffered their own tragedies.”

Syria remains in the hands of President Bashar al-Assad, who destroyed large swaths of the country to stay in power. But Denmark has concluded it is safe for Syrians to return to Damascus and is rapidly revoking or refusing to extend residency permits on that basis. The move has earned the country – which once took pride as the first signatory of the 1951 United Nations refugee convention – a barrage of criticism.

Denmark’s asylum policies prioritize return over integration. But that can be life-threatening when the country one must return to is Syria.

At the heart of the matter are broad Danish concerns that migrants and refugees are undermining the country’s societal cohesion, which many Danes believe depends on a shared language and cultural heritage. The effort to stem migration, including asylum requests, is popular across the Danish political spectrum, despite the deadly impact it could have on vulnerable Syrian refugees.

“The whole idea is to send a message to both refugees who are here and people who are not here yet: Don’t come to Denmark,” says Karen Nielsen Breidahl, associate professor in political science at Aalborg University.

The safety of Damascus

Political scientists say the government’s decision reflects a long-running effort to make wealthy Denmark less appealing to asylum-seekers. Controversial measures, such as stripping new arrivals of their jewelry and separating young couples, multiplied after the influx of migrants to Europe in 2015-16. Concerns that foreigners are a strain on the Danish welfare system and hurt social cohesion predate that crisis by a few decades, but now cut across party lines.

The Danish government says it is convinced that it is now safe for Syrians to return to the Damascus area. In a statement handed out by his office, Danish Minister of Immigration and Integration Mattias Tesfaye said, “the general security situation in the area in and around Damascus has improved to such an extent that the need for protection for persons who are not individually persecuted … has ceased to exist.”

And Mr. Tesfaye, whose father was an Ethiopian refugee, has been adamant that refugees should return home to rebuild their lives there as soon as conditions allow. “Denmark has been open and honest from day one,” he said. “We have made it clear to the Syrian refugees that their residence permit is temporary and that the permit can be revoked if the need for protection ceases to exist.”

Syria experts – including the vast majority of those consulted by the Danish authorities – reject the notion that Damascus and its surroundings can be considered safe as long as the country is run by Mr. Assad. The Syrian conflict, now in its 10th year, has killed over half a million people, including tens of thousands of people tortured to death in regime-controlled detention centers.

Lisa Blinkenberg, a senior adviser at Amnesty International, notes Syrians returning to government-held areas must go through security clearances. “This involves interrogation by the security forces and these same forces have been behind widespread and systematic human rights violations and crimes against humanity,” she says. “We are talking about torture, extrajudicial executions, and enforced disappearances.”

But by declaring Damascus safe, Denmark has shifted the ground of debate for Syrians trying to argue they would still be in danger there. Syrian refugees stress that the violent government that triggered their displacement remains in place, along with its brutal security apparatus. Denmark focuses on the absence of clashes.

“What the Danish authorities are assessing is whether the Syrians have a risk of being persecuted on an individual basis,” Ms. Blinkenberg says. “It is not enough to say that there is a lot of violence going on. You need to prove that you are individually persecuted.”

Because family members receive different levels of protection when seeking asylum in Denmark, that heightens the risk that they will be split up.

That possibility overshadowed the Eid celebrations of the Alata family, who came to Denmark in a staggered fashion. The first to arrive after surviving the “journey of death” across the Mediterranean was Abdo Alata. He has been the de facto head of the family since 2012, when snipers shot his father off his motorbike and then executed him in Darayya, one of the first areas near Damascus to rebel against Mr. Assad.

Mr. Alata has political asylum in Denmark and lives in the port city of Vejle. His brother, Mohamed, got that status only after turning 18. But their mother, Sabriya, and two sisters had their permits revoked just a few weeks ago. They worry Sabriya risks arrest on return to Syria because she gave food and water to protesters, and because Abdo and Mohamed dodged military service.

They also fret over how sisters Tasnim and Sahed would cope in Syria, since life in Denmark is all they know. The girls speak Danish fluently, have Danish friends, and don’t know how to write Arabic.

“The little ones don’t know the details or the scale of crimes in Syria,” says Mr. Alata. “They only know our father in pictures. I raised them. Sometimes they call me baba [father] but Denmark does not take these feelings into account.”

Anxiety also filled Belqis Ibrahim as she drove her parents for a routine COVID-19 test earlier this month in Aarhus, Denmark’s second-largest city. “Every time I listen to the news, I get stressed,” says Ms. Ibrahim, who recently completed studies in software engineering. “From the moment we got here, there have been discussions in parliament about sending Syrians back.”

“Refugees are seen as problematic”

The dominance of far-right and conservative nationalist values came into sharp focus with the tough-on-migration campaign promises that returned the leftist Social Democrats to power in the summer of 2019. Those promises became policies – building on a February 2019 “paradigm shift” law that had secured the backing of major parties and puts an emphasis on returns over integration. Prime Minister Mette Frederiksen now aims for zero asylum-seekers.

“The Social Democrats realized early on that they have to be strict if they want to keep power and form governments,” says Professor Breidahl.

She notes that there is a widespread perception – particularly among the decisive demographic of older, white- and blue-collar voters – that social cohesion and high social trust in Denmark require a homogeneous society. The welfare state is valued by all, but over time it has become less inclusive.

“Refugees are seen as problematic, especially refugees from Muslim and African countries,” says Professor Breidahl. “It began with the political parties who wanted to gain voters but now the political parties are also constructing the voters and the way they think about refugees and immigrants. There are so many wrong pictures about what a refugee is, what is an asylum-seeker.”

The result, she adds, is stricter and stricter rules that are demotivating even for those who have the residency permits and are trying to integrate. Municipal social workers who try to facilitate integration through language courses and professional training are required to raise the option of return at every meeting, not just with Syrians, but also Iranians, Iraqis, and South Americans.

“The system is full of dilemmas,” says Professor Breidahl, who researches global migration flows and their impact on the welfare system. “It is really difficult.”

To date, about 400 Syrians, including minors, have had their cases rejected by the Danish immigration services. But under criticism both domestic and abroad, forced returns have been ruled out by the government.

Regardless, the rejections cannot result in any immediate expulsions for a simple legal reason: Syrians cannot be forcibly returned as long as Copenhagen’s diplomatic ties with Damascus remain broken. That leaves Charlotte Slente, head of the Danish Refugee Council, puzzled. “It is pointless to remove people from the life they are trying to build in Denmark and put them in a waiting position without an end date, after they have fled the horrible conflict in their homeland.”

Still, since 2019, about 250 Syrians with legal residency in Denmark have been repatriated voluntarily, taking up the government on a substantive cash offer of $28,400, according to the Ministry of Immigration and Integration. But some, like Khadijah Rahal’s daughter, Nevien, have been able to mount successful appeals against having their status revoked. She hopes she and her husband will be able to do the same.

“For someone who has problems with the Syrian regime, you can give them all the millions of the world, but they will not go back,” says Ms. Rahal. “Over there it is certain death. Here it is psychological warfare.”