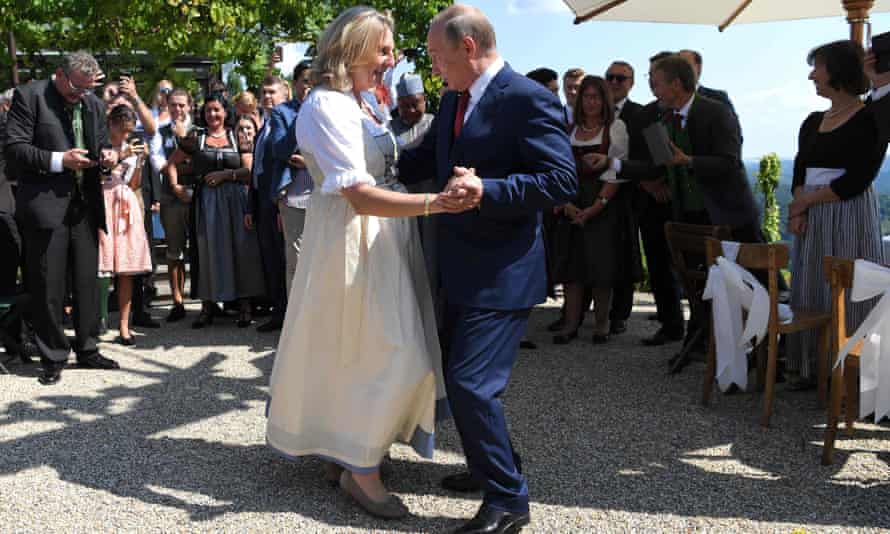 A former Austrian foreign minister who danced with Vladimir Putin at her wedding has been given a seat on the board of directors of the Russian state-controlled oil industry giant Rosneft, the company has annnounced.

Karin Kneissl shot to infamy after she invited Putin to her wedding. Images of her dancing with the Russian leader in Gamlitz in the south-eastern state of Styria near the Slovenian border, went around the world in August 2018.

The footage, in which Kneissl – dressed in a dirndl outfit – curtsied to Putin, was broadcast exclusively by the Russian state broadcaster Russia Today. It drew widespread criticism, coming just months after some EU countries – excluding Austria, which stressed its neutrality and cited its close ties with Russia – expelled scores of Russian diplomats in response to the nerve agent attack on Sergei Skripal in Salisbury.

Kneissl had her first contact with Putin during her time as foreign minister, a post she was helped into by the far-right FPÖ. She is not officially affiliated to any party.

After leaving the government in 2019, last year she became a guest columnist for Russia Today, which is widely viewed as a propaganda arm of the Kremlin.

She will join Rosneft as an independent director, the company said in a statement made after its annual general shareholder meeting on Tuesday, following her nomination in March.

It is not known how much Kneissl will earn. But she follows in the footsteps of the former German chancellor Gerhard Schröder, who became friends with Putin during his time in office. He has been a member and chairman of the board of directors Rosneft for four years and has been confirmed to be drawing an annual salary of $600,000 (£424,000).

Schröder, who was a fervent supporter of the Nord Stream pipeline project that supplies Russian gas to Germany, became head of Gazprom’s shareholder committee within weeks of being voted out of political office. He has subsequently held various posts at Gazprom and Rosneft.

Other western figureheads on Rosneft’s board are the chief executive of BP Bernard Looney, who is Irish, and Bob Dudley, the former boss of BP, who is American.

Rosneft’s chief executive is Igor Sechin who has been a close ally of Putin’s for about three decades. The company is majority-owned by the Russian government.

Kneissl, 56, a former diplomat, who on her own website describes herself as a Middle East energy analyst and author, has regularly made the headlines since the famous dance. Her 2018 marriage to businessman Wolfgang Meilinger collapsed after a short period after she accused him of being physically violent towards her. He has denied the charges.

She took a lawyer to court after he accused her of unnecessarily having her Boxer dog Niklas put down, but the case was settled after the lawyer paid Kneissl €5,000 in compensation and she withdrew her complaint. More recently it was reported in the Austrian media that she had complained about her unsuccessful application for compensation from the government’s hardship fund for people who lost their income due to the pandemic, having not been able to work.

Kneissl is a virulent critic of the EU, and her first column for Russia Today was about the future of mobility which she said would take place in Africa and China and rather than in Europe, which was full of “industrial cemeteries”.